Welcome to my little light table small world sensory play activity, as you can tell I’ve had some trouble naming it.  To actually set this up take less than 5 minutes, although there is some prep required before hand. 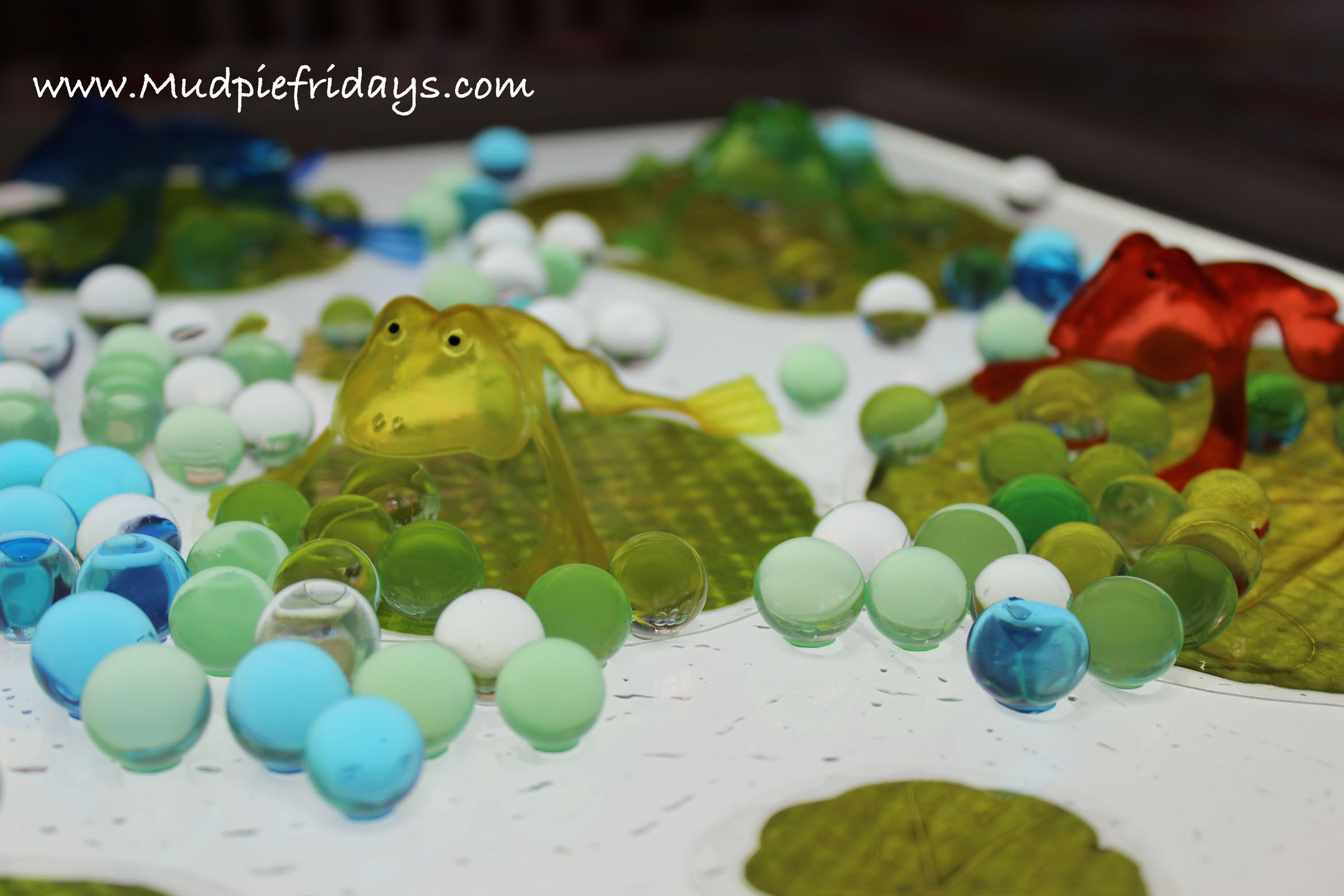 First the lily pads – I used pressed nasturtium leaves which we picked and squashed (pressed) last year – Monkey found the whole process interesting although it did take us quite a few more attempts than I was expecting to end up with whole leaves, since they become so much more delicate once pressed. To keep them as perfect as possible I laminated them, because of the shape they are perfect for lily pads. I appreciate that we are only just getting into the flowering season, so if you wanted to do this now you could easily replicate these with green cellophane cut to shape. 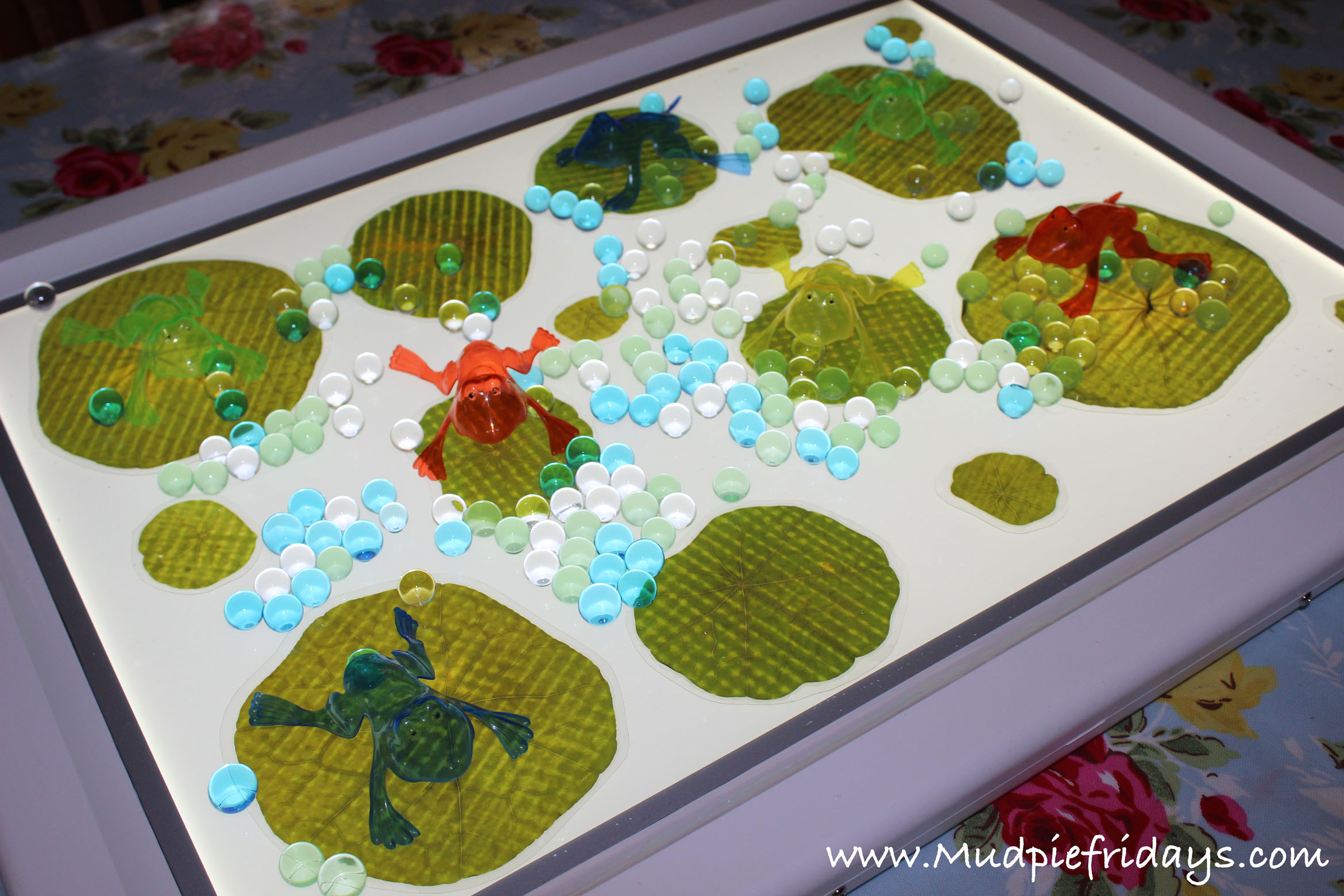 I also used water beads to add an extra element. Monkey loves water beads. If you have not come across them before they are traditionally meant for cut flowers to add colour and interest to vases. They start life as tiny little solid balls that absorb water and swell to around marble size. I should also say now that I only introduced Monkey to water beads once he had stopped mouthing everything and he could understand they do not go in his mouth. These are definitely a choking hazard and they are synthetic so would not be good for your little one if they swallowed them! Please be aware of this. Even now I will not leave him unattended with water beads. 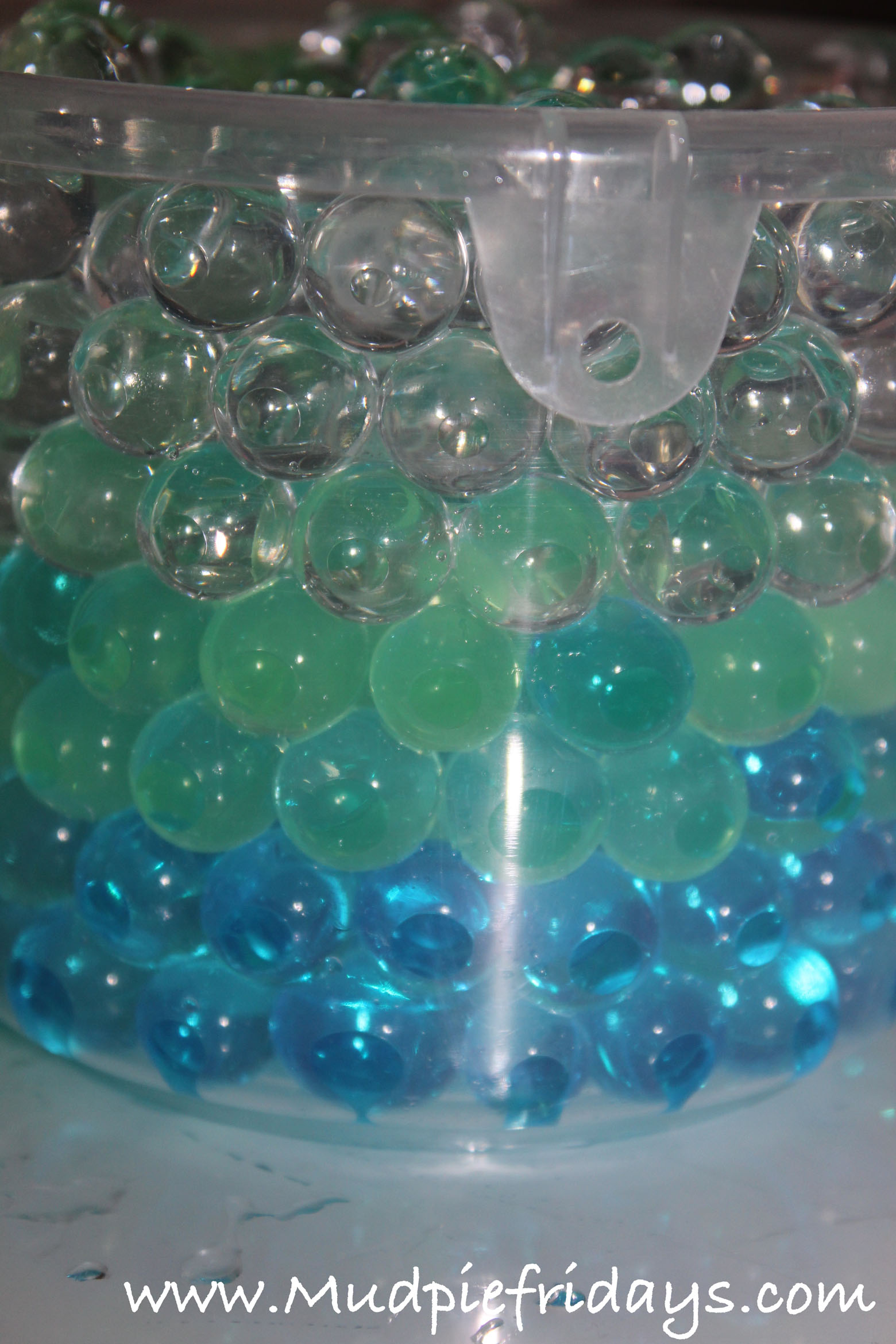 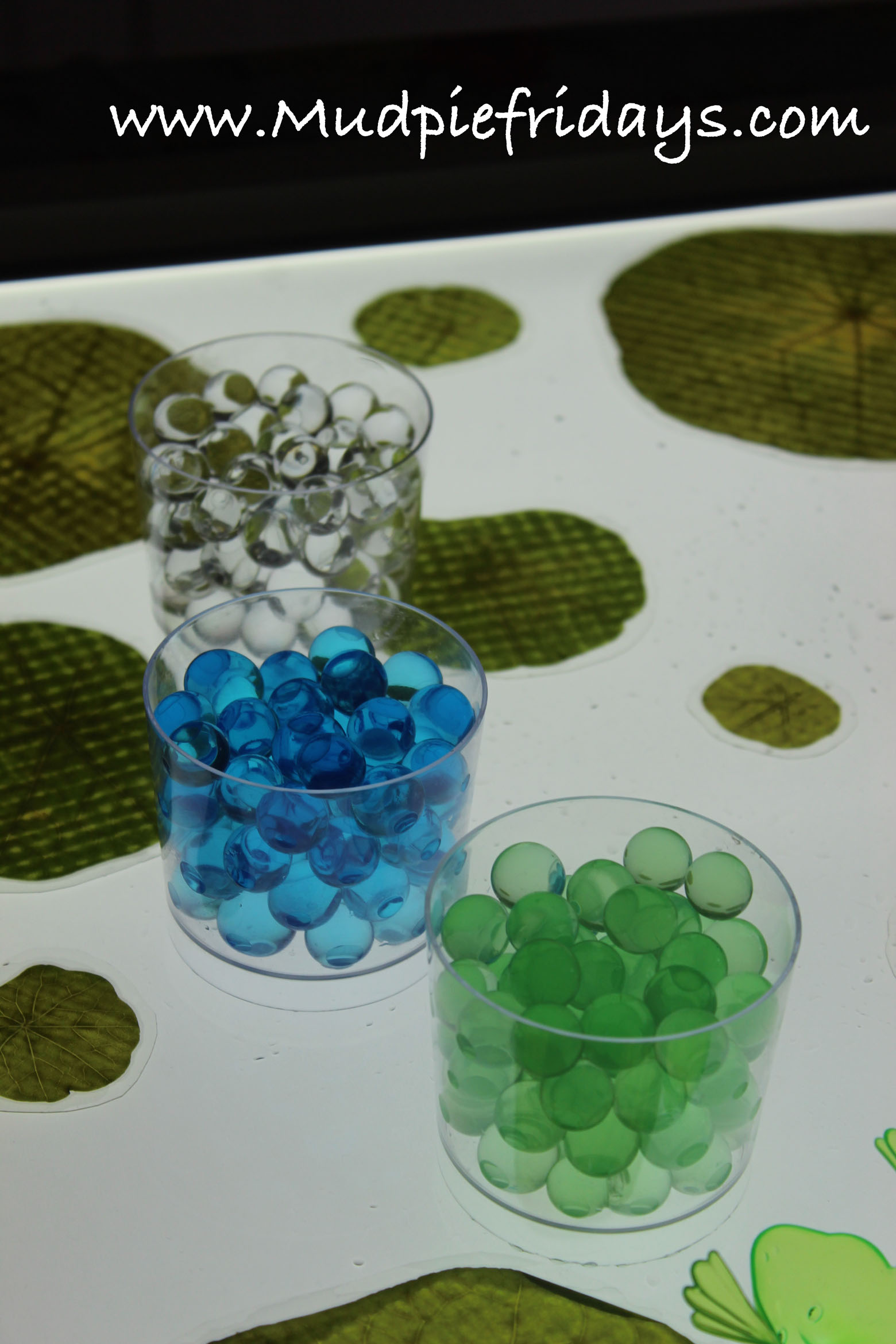 The water beads need to go into soak in tap water around 12 hours before you need them. I say around as I have done it the night before and used them in the morning which is only about 8 hours. It just means the less time you leave them in the less time they have to soak up the water and grow. In some ways the smaller they are the harder they are so less likely to get crushed by small hands – they are stronger when less saturated. However they are an ideal sensory play material as they are very tactile – even as an adult there is something about them. I would probably describe them as smooth, not slimy to touch, slightly squishy and will bounce and roll if dropped on the floor. They are great in water especially the clear ones as they disappear all together. It is possible to reuse them by letting them dry out completely before storing and then re-soaking them in water the next time you wanted to use them. I buy mine from amazon and the come in a wide variety of colours. I chose some green, blue and clear ones for this purpose of this play scene.

The frogs I used were slightly see through so perfect for the light box and actually part of a jumping frog game. Monkey decided first that we needed to make all the frogs jump off of the table, we had a bit of a race with them. It soon transpired that the reason he wanted the frogs out of the way was because he wanted just to play with the water beads! 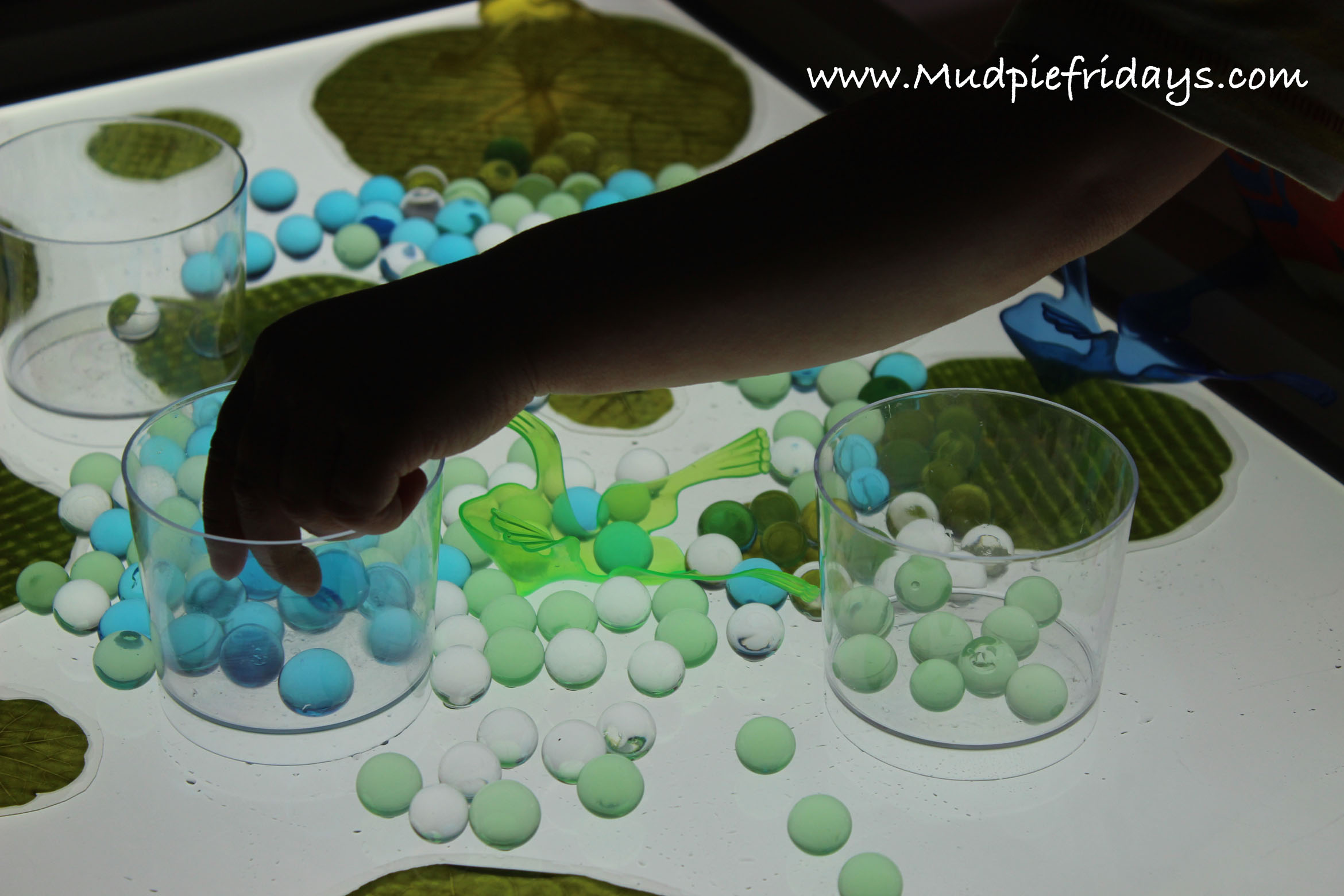 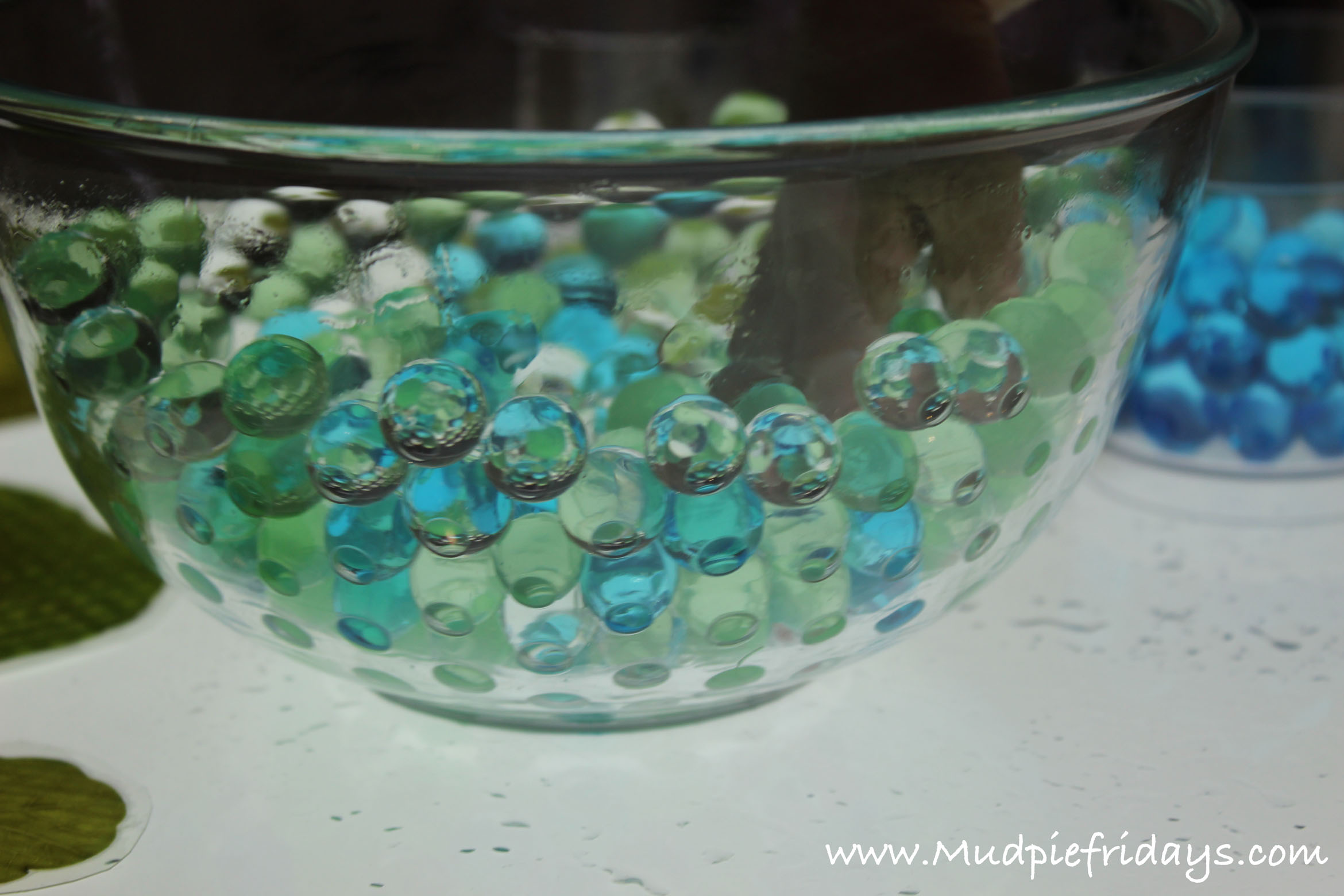 We added some clear pots and he started sorting them into their different colours, after which we combined them into one large pot. It kept him busy for 45 minutes sorting the colours into different pots, mixing them up again and then dividing them up again. He particularly liked the blue ones as its his favourite colour at the moment. We also progressed onto sorting by size. He was very sad when bedtime came around and it was time to leave them until tomorrow. 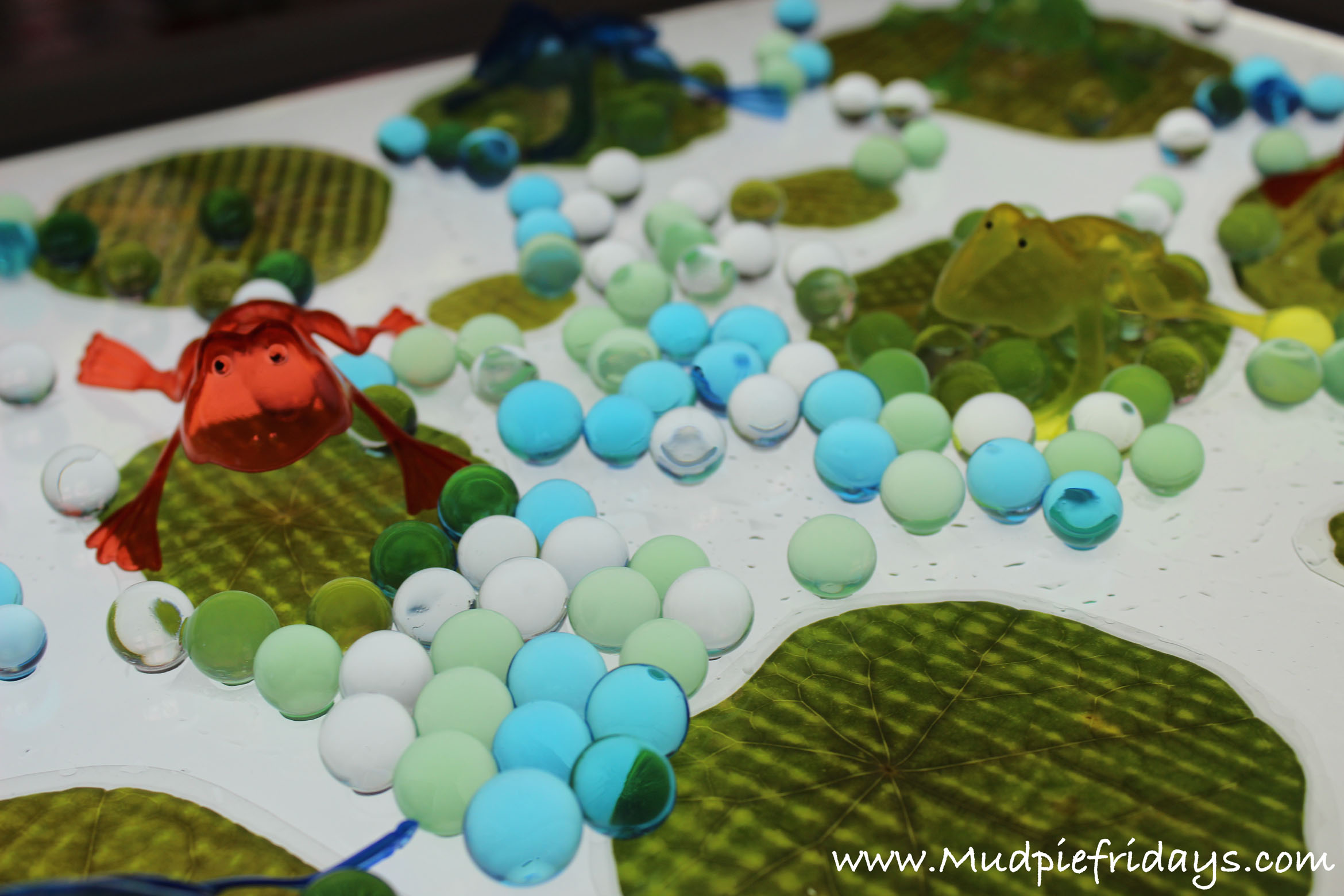 Family Days out in Hampshire