Recently I have started to try and teach Monkey the alphabet through play. We have been putting together alphabet boxes here and have started introducing a new letter every couple of weeks. So when I was approached by Appealing Rabbit to review their brilliant alphabet cards I jumped at the chance. 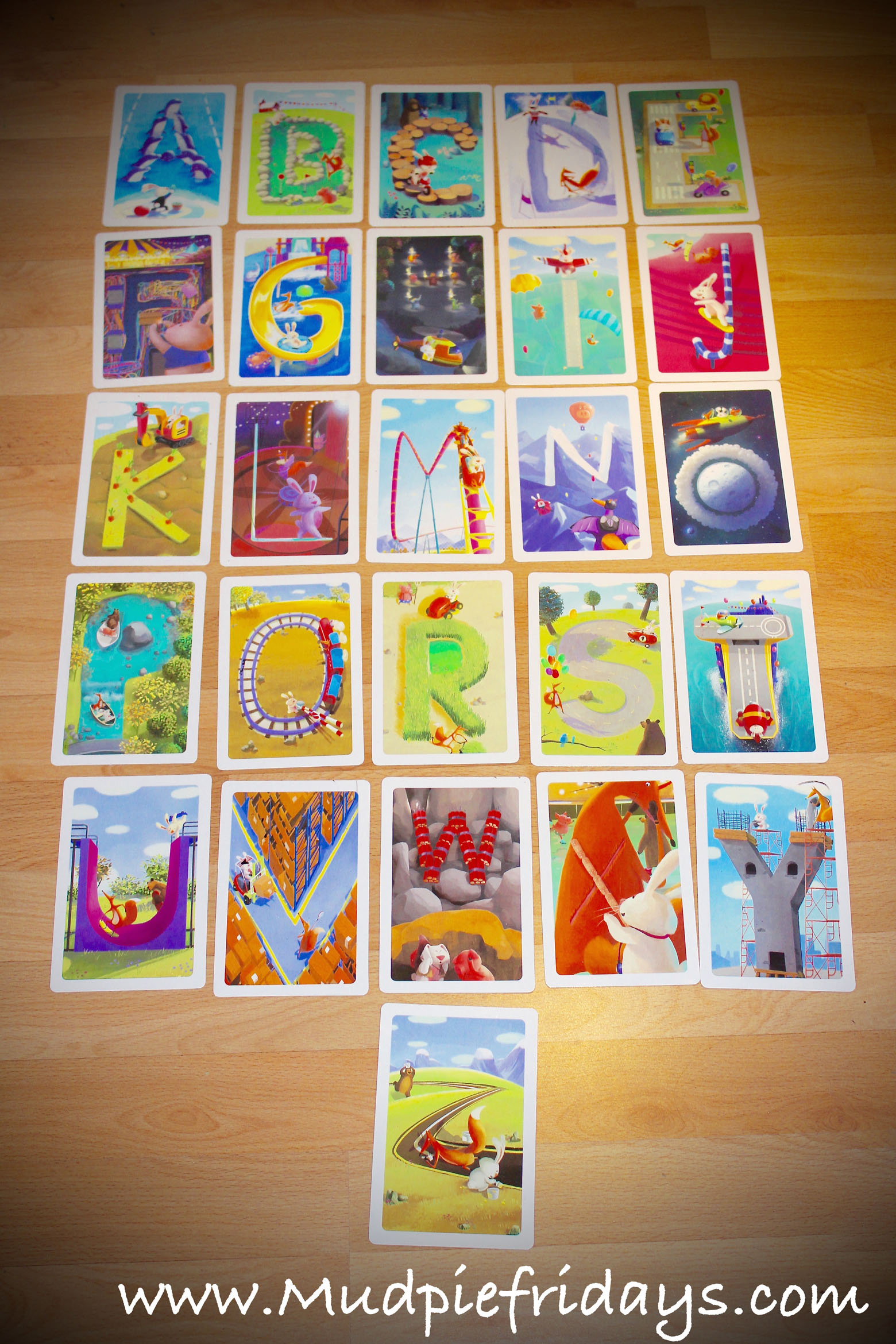 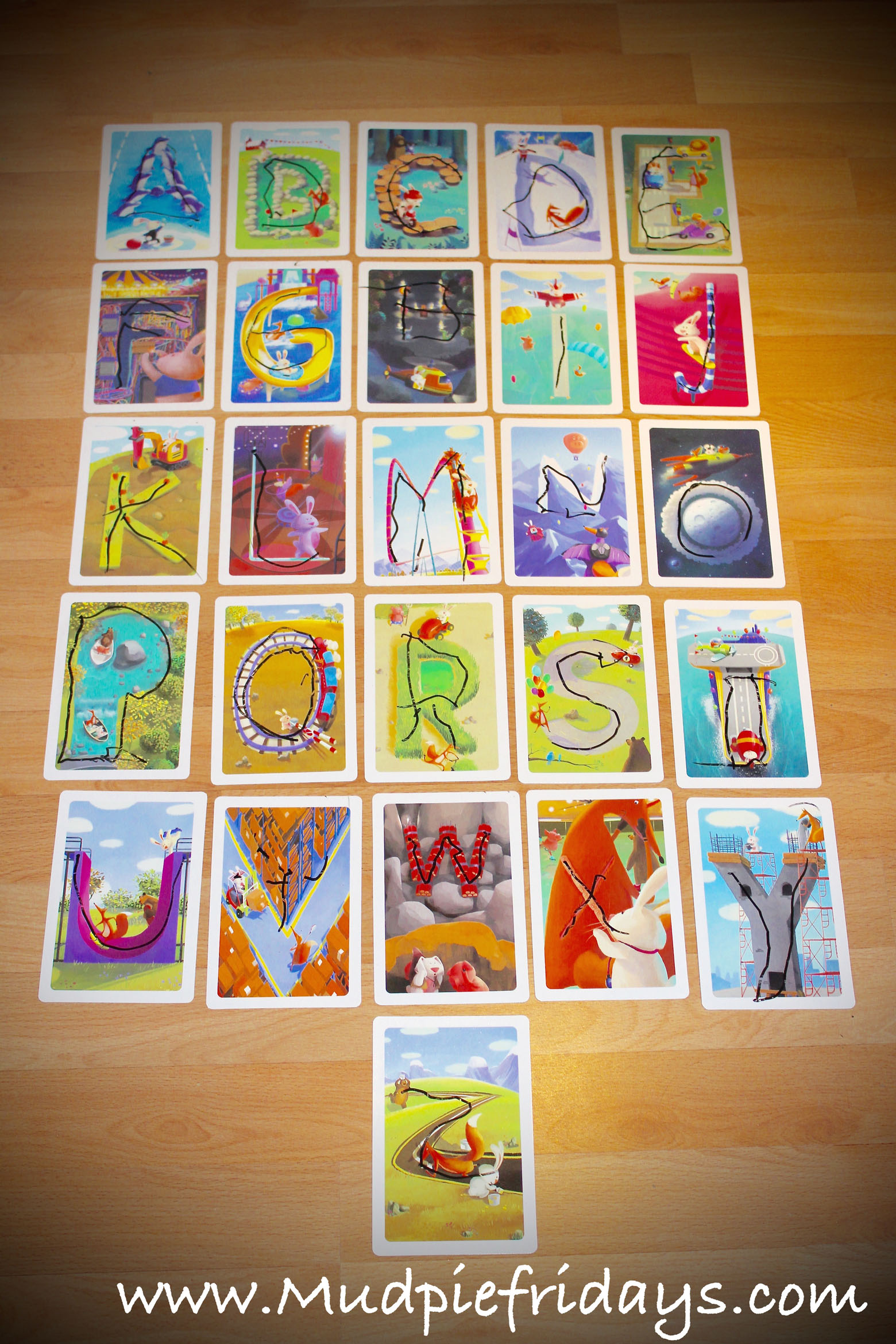 Monkey literally turns three at the end of the week, we have not tried any traceable  letter books yet so I was really interested to see how he would cope with the cards. 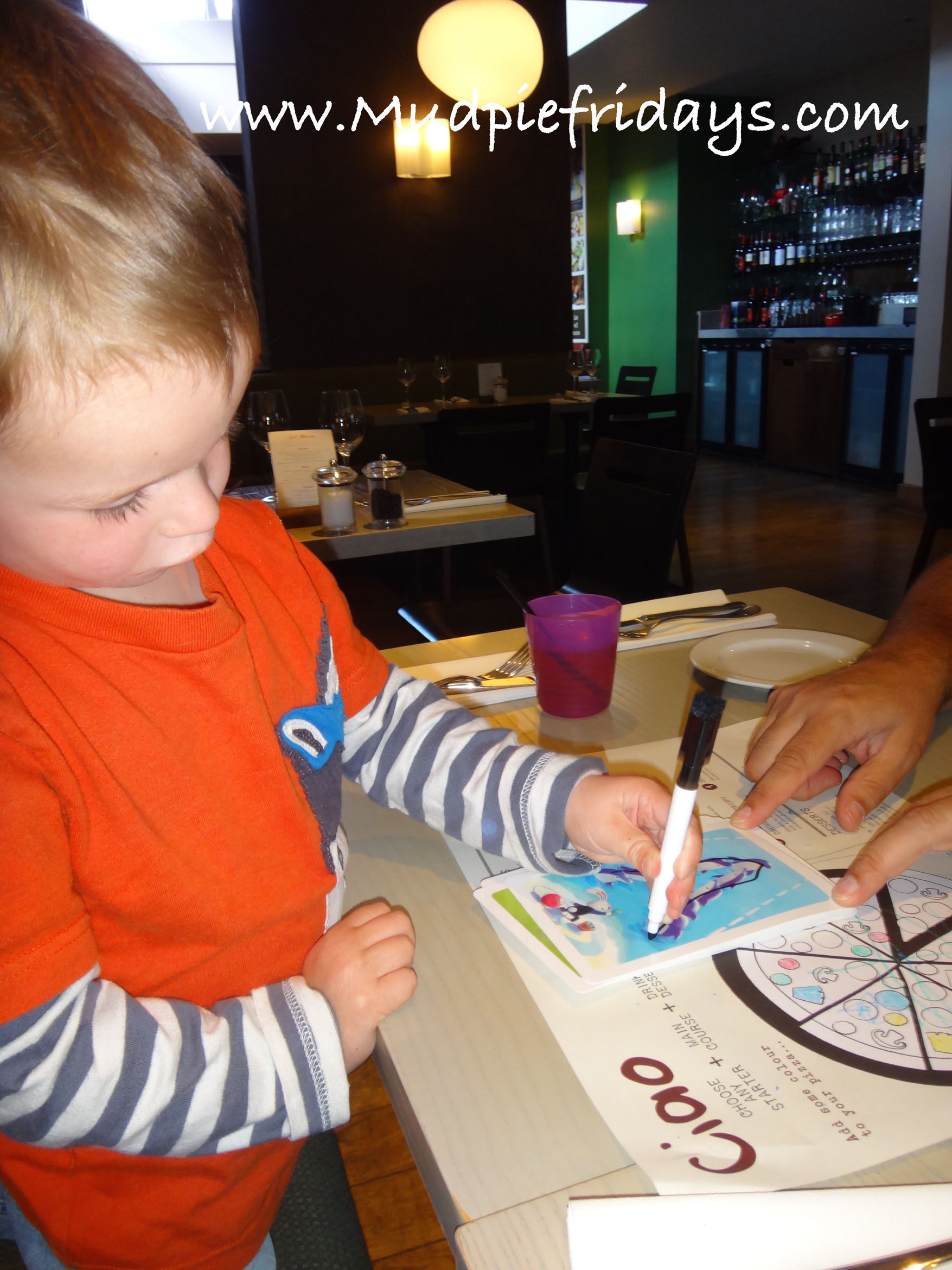 First a bit of history, the cards were the brainchild of one concerned father to help his six year old form letters. Each card features a colourful letter with objects that promote the correct letter formation. There are 30 cards in a set including 3 additional Scandinavian letters and a game card (see below). It also comes with a black dry ease marker which can be easily wiped off with the foam pad on the cap of the pen. 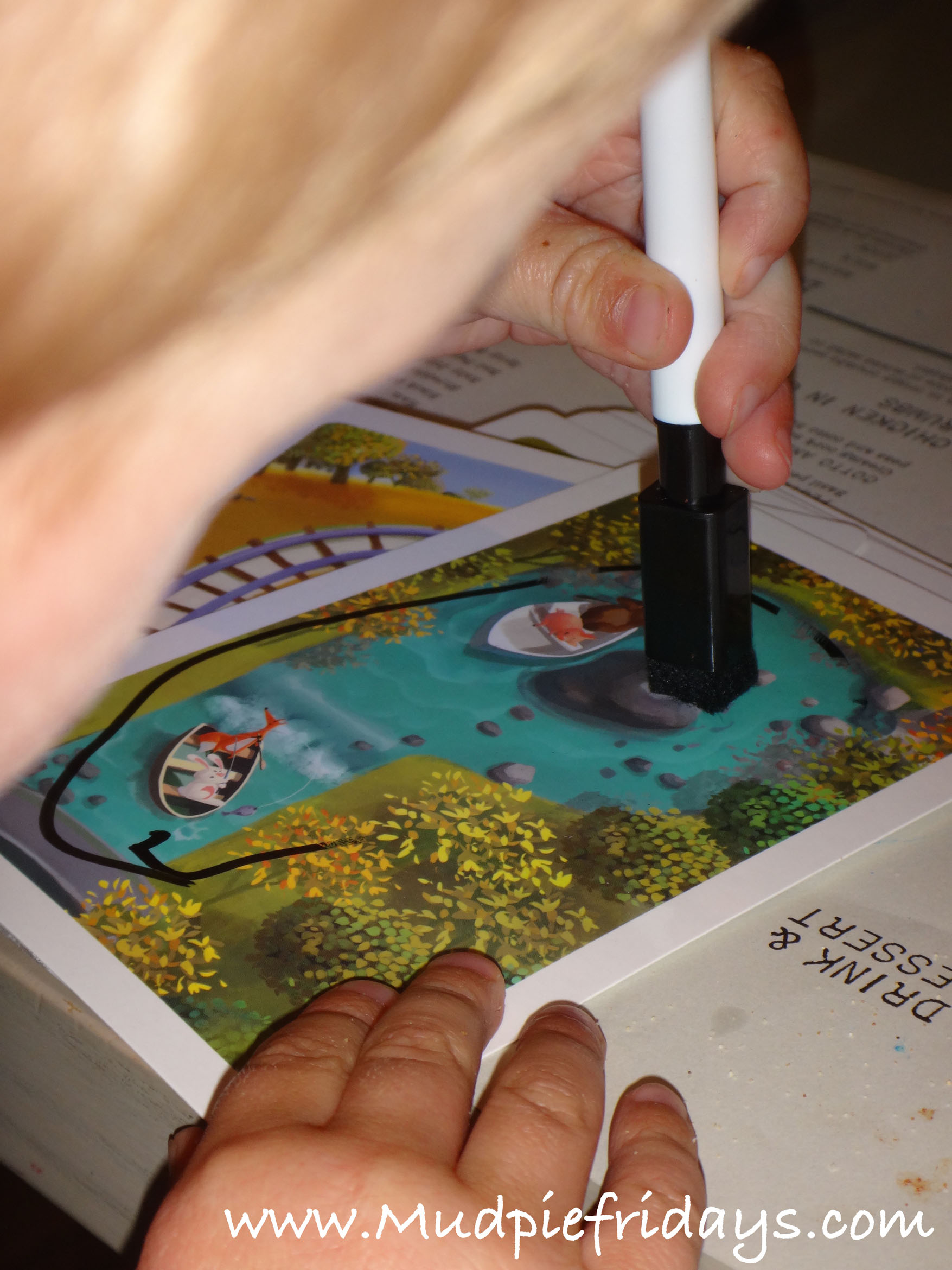 I decided to introduce them to him while we were out and about. I advocate the use of busy bags with preschoolers, this is exactly the sort of activity I would include in one to take with me when heading for a restaurant or similar. It turned out that they worked really well, Monkey appears to be left handed and had no trouble with the marker rubbing off as he went about forming the letters

Monkey really enjoyed tracing the letters, wiping the marker off and then writing it again. He seemed to like letters K and S the best. 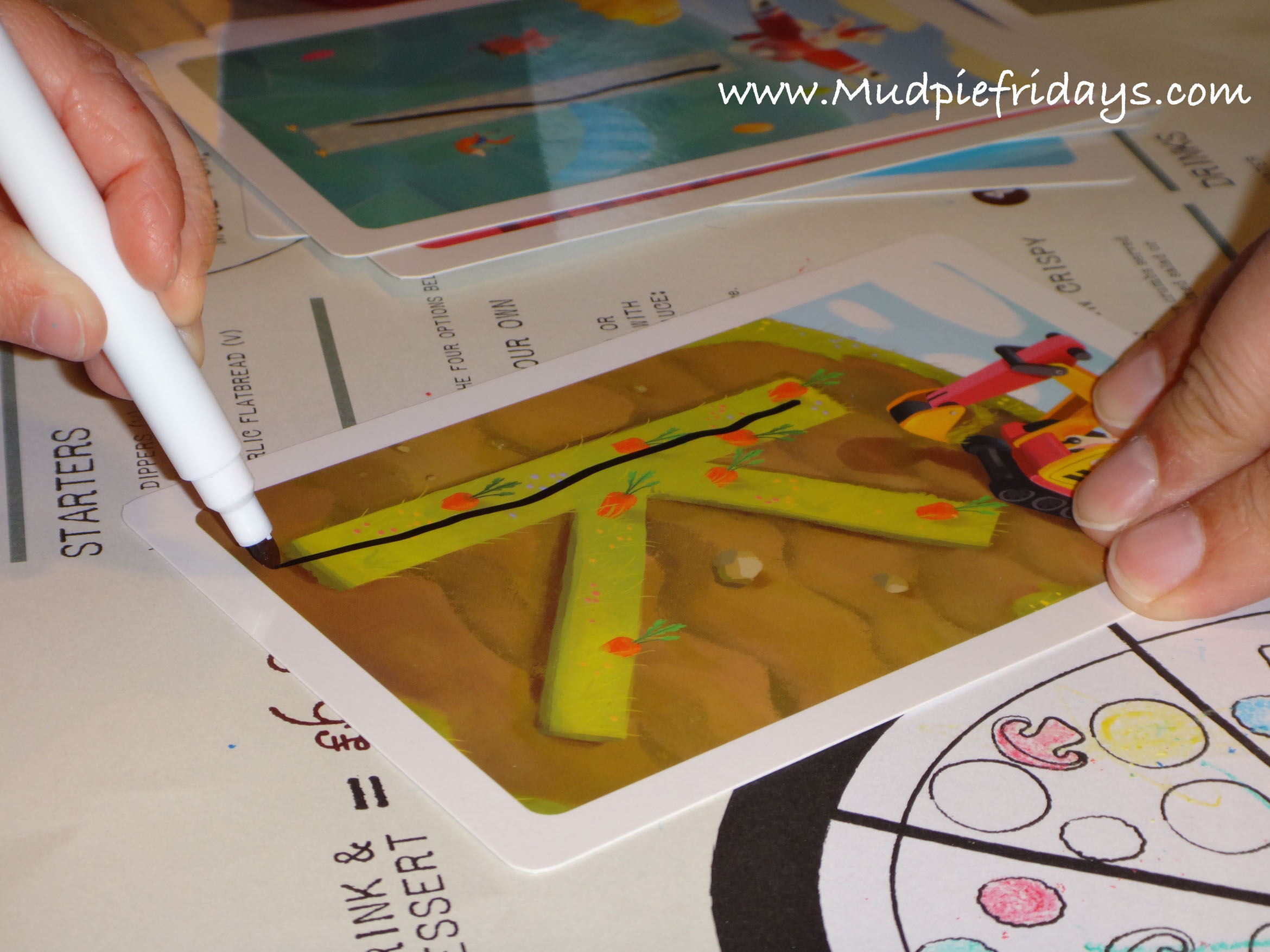 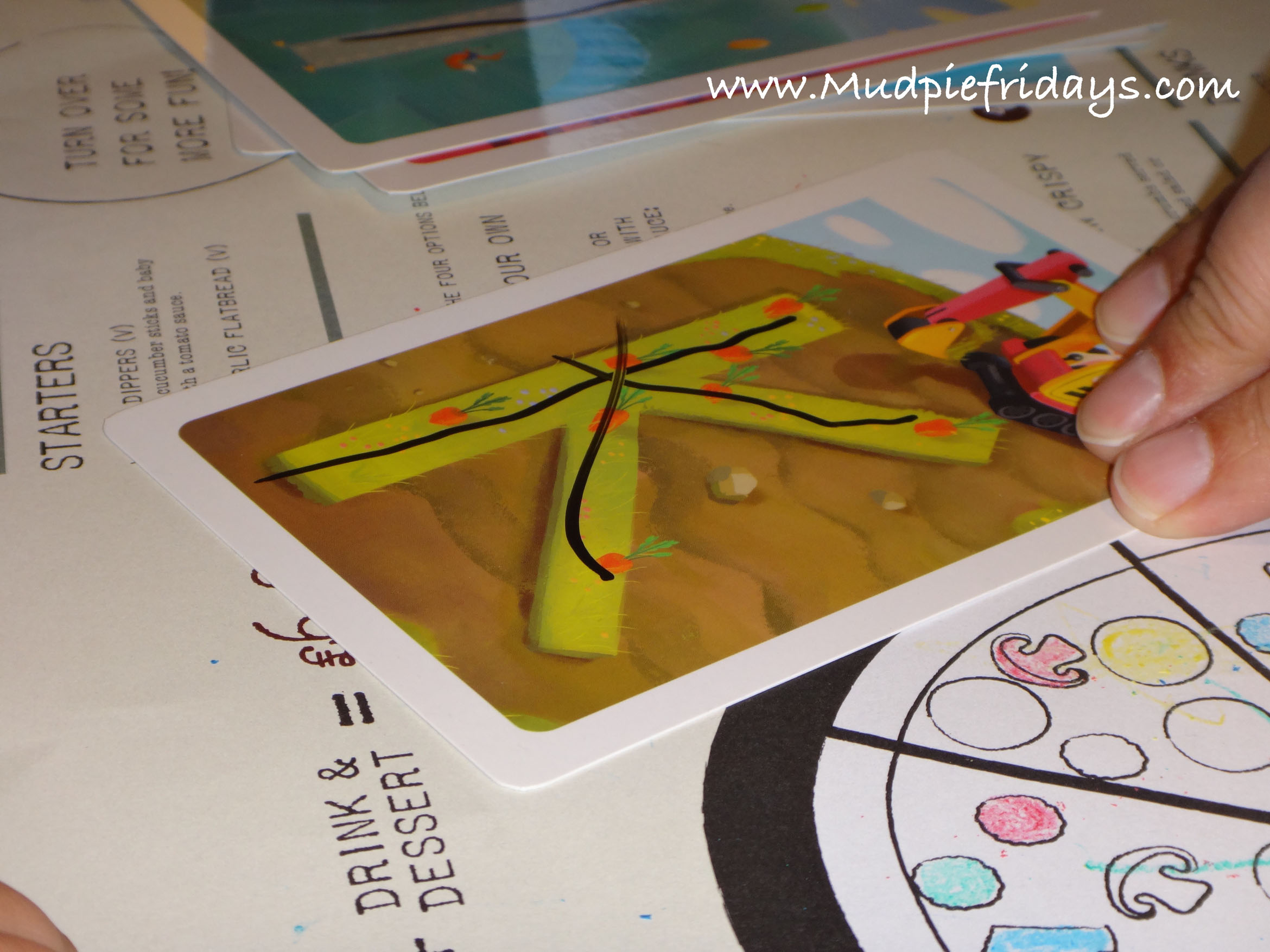 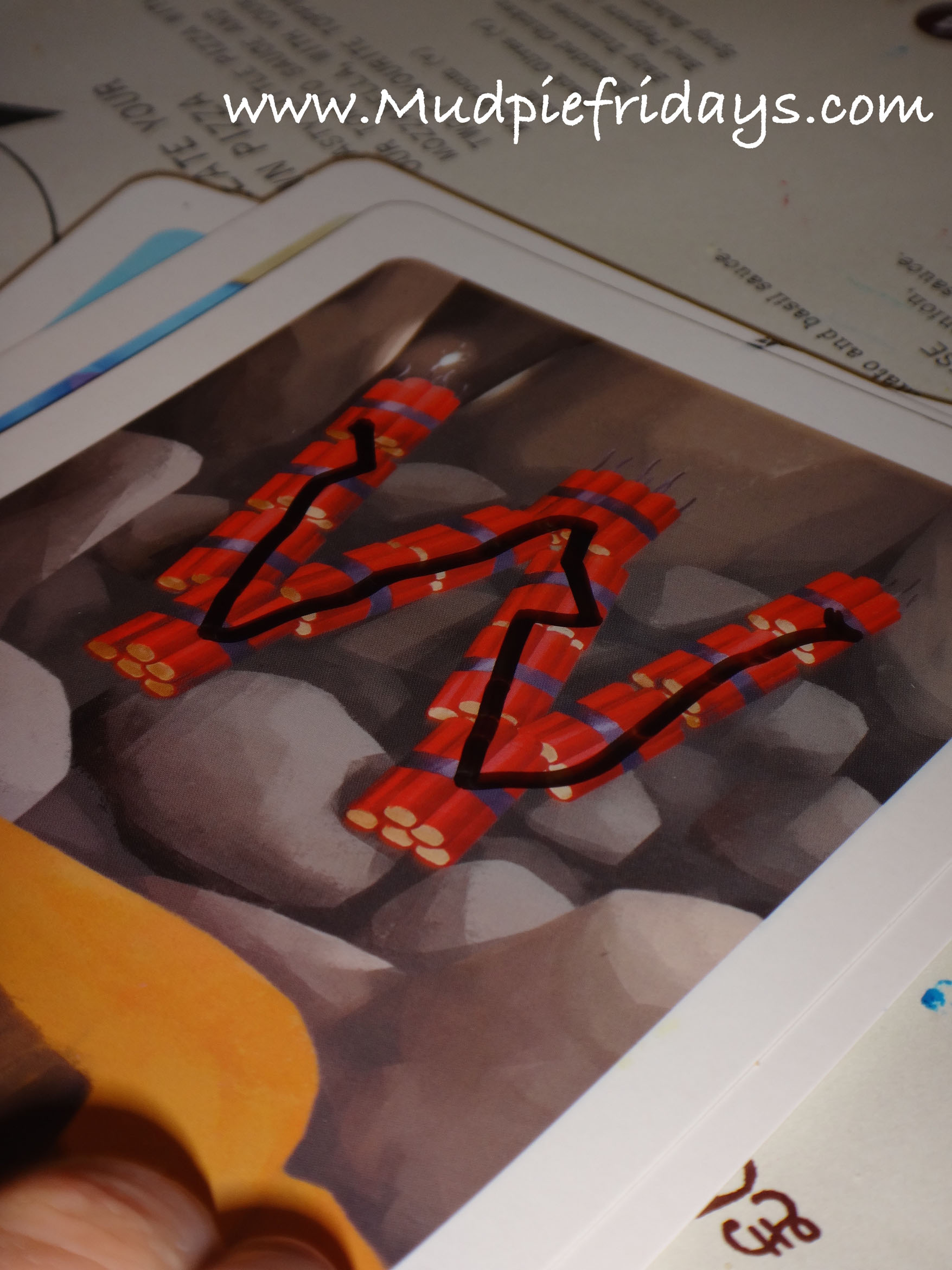 I was really impressed with what he achieved considering it was his first attempt. Since the box is 6×4 inches it easily fits in a handbag, so will definately be coming out with us again. We are also planning along haul flight later in the year, these cards would be ideal for keeping kids amused on a plane and they don’t take up much room.

As well as when we were out, we have also been using them at home mainly matching them to our alphabet boxes. As the cards feature capital letters they can be used to match with lower cases letters on the boxes. 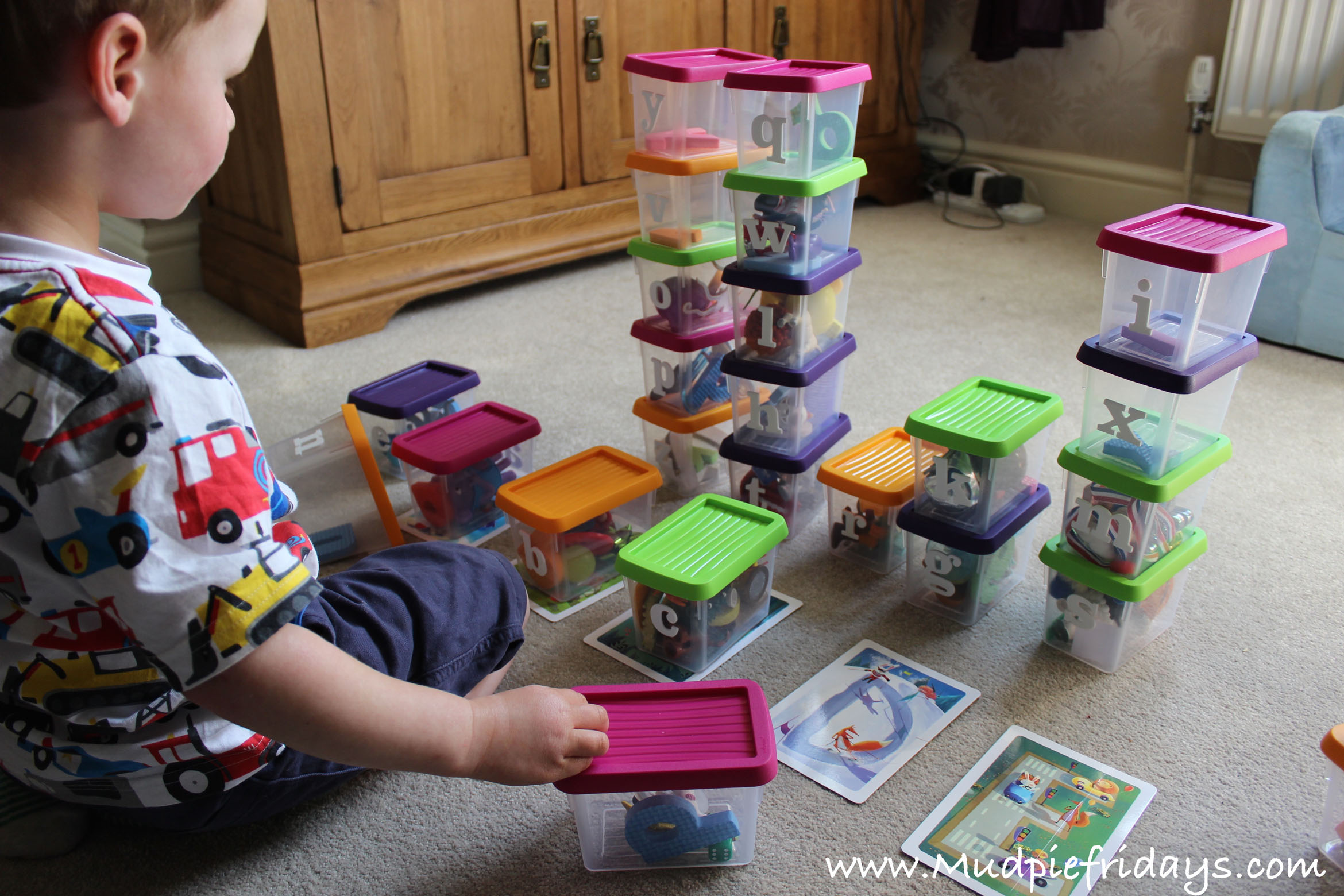 Once Monkey is a bit older you can use the cards to turn it into a competitive game using the below card. The game works by a point being awarded for each correctly formed letter. 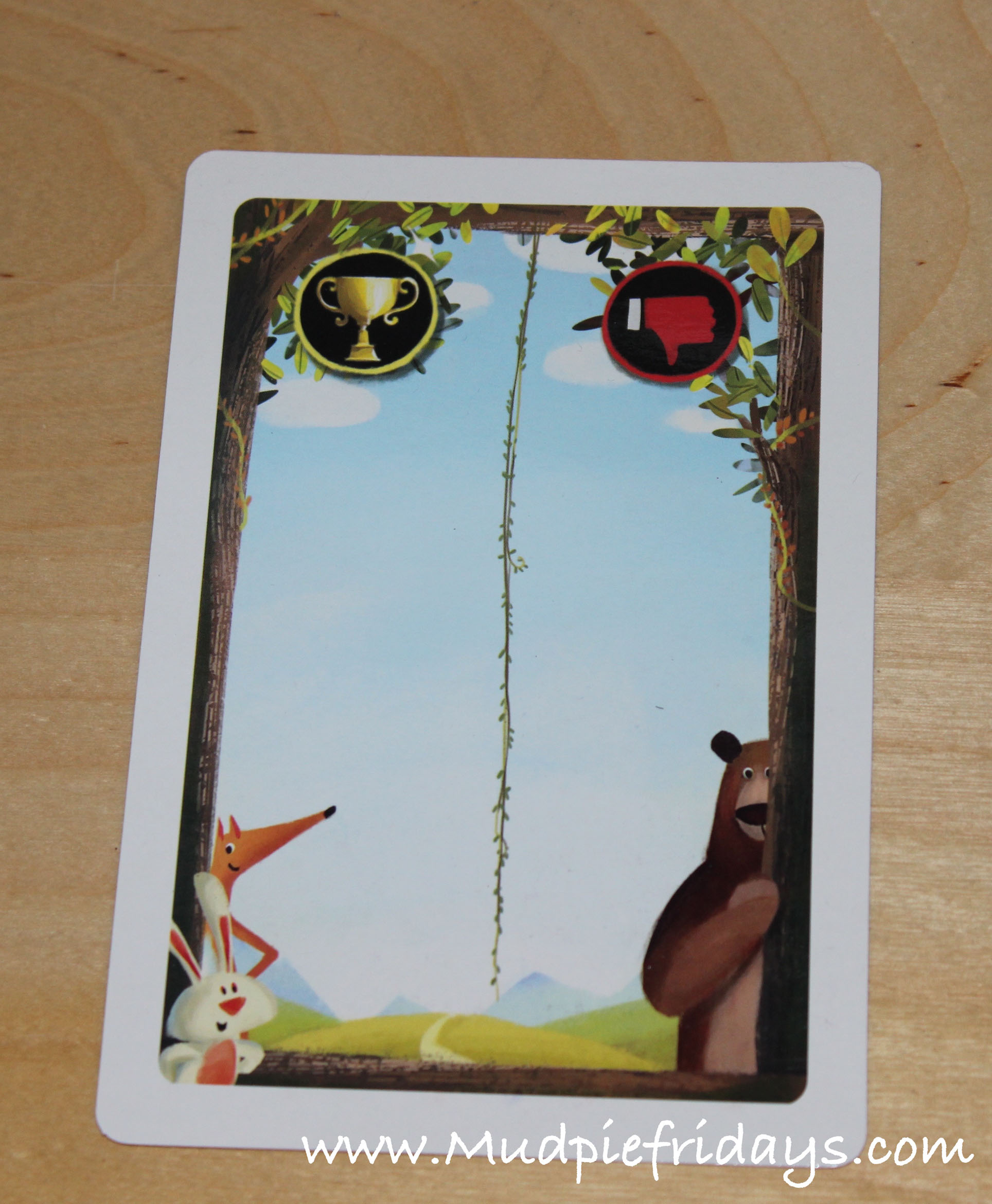 As he gets older I will be using them to spell certain sight words and other words which are important to him, such as his name..

The only improvement I would like to see is the addition of lowercase letters to the set. This would open the number of games you could play with the cards and cement the learning process through play.

I was genuinely impressed with how he was happily entertained writing on the cards, wiping them off and doing it again. The cards retail at £9.90 and would make a really good educational present, they also ship all over the world. If you are interested in finding out more check out their website here. 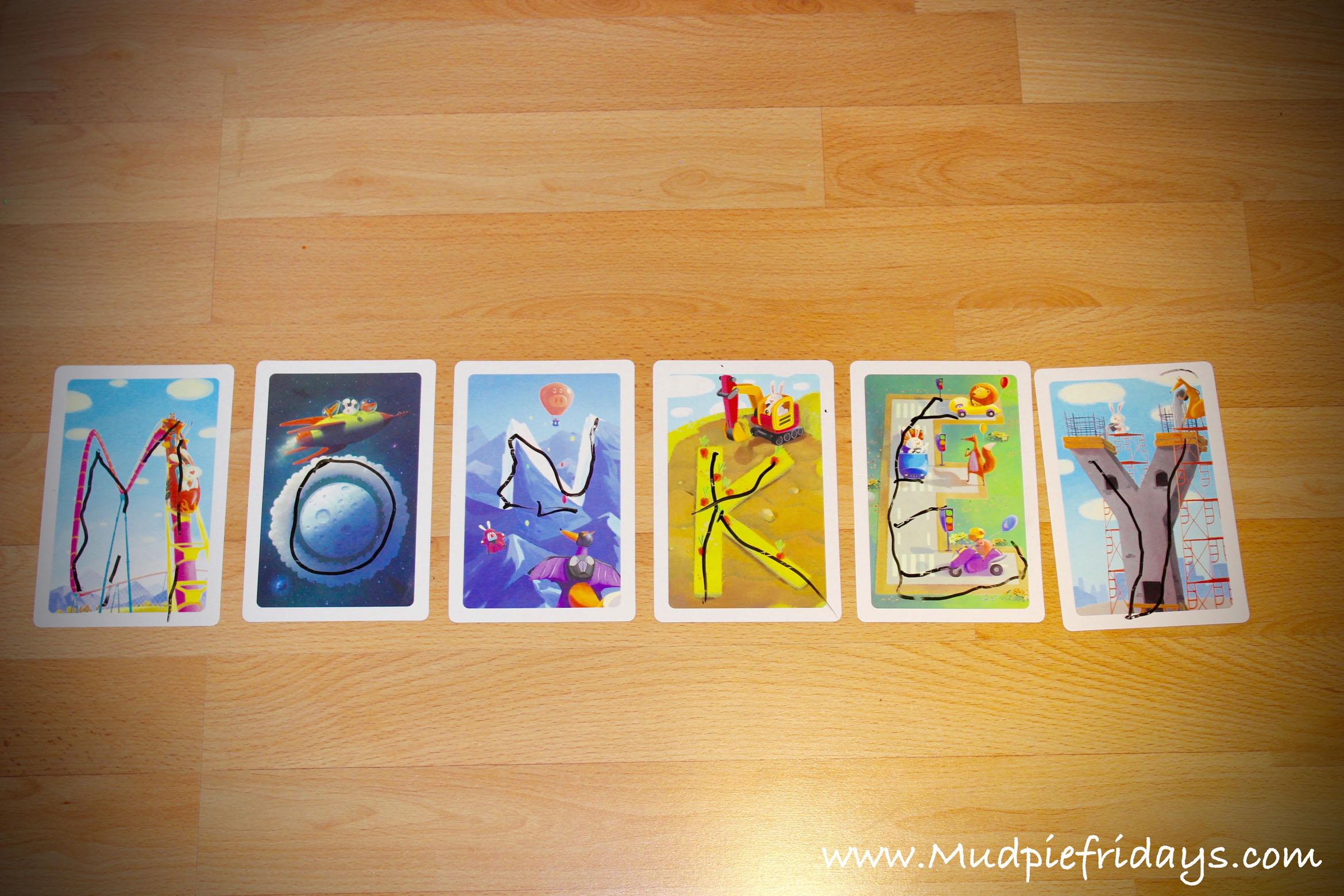 I was given the Appealing Rabbit Alphabet Card Game to review. All opinions are my own.