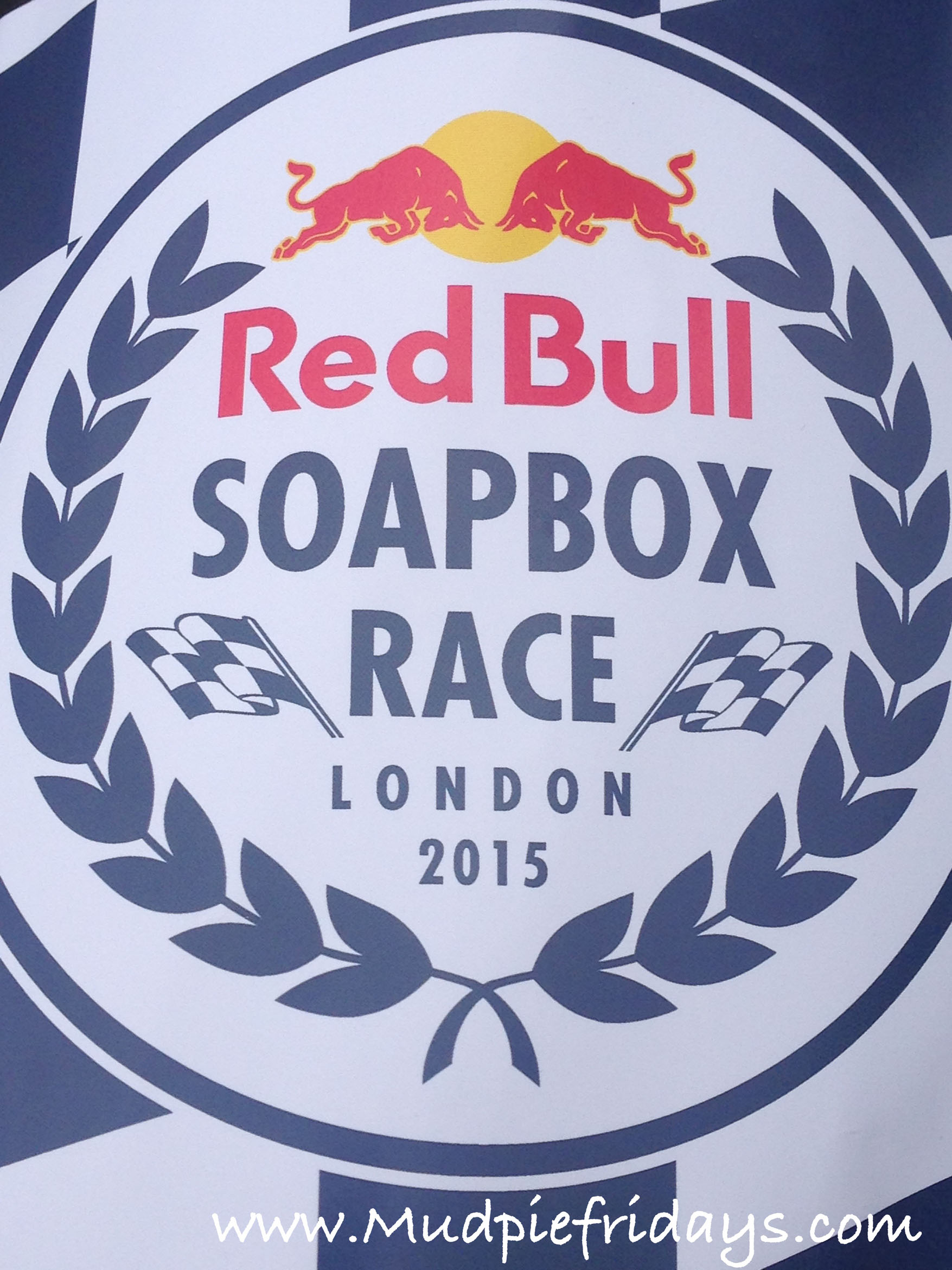 Its something we have always fancied doing – The Redbull Soapbox Race – but is it something which you can do with a three year old? This year on the 12th of July we headed to Alexandra Palace, London to find out!

Getting There & Getting In – Monkey loves travelling on the train but to be honest if there is an option to drive then we will. Having checked out where Alexandra Palace is and the fact they have a carpark for 1500 cars we were relatively confident if we arrived early we would get a space. Now tickets are purchased via Ticker Master, and the tickets clearly say there is no parking. Which it transpires there is not! We got very lucky indeed parking just down from the Palace on a side road. Thankfully with it being a Sunday parking permits were not in operation. I would not recommend this! However if you want to give it a go then we arrived around 9.45, it opened at 10.30.

There were a number of people walking up from the station (Woods Green) and it looked as though there was some parking towards the town. But as we didn’t need to venture towards it I can not promise. The drawback of getting the train with little ones is the queues on the way out. They were controlling the number of people onto the stations when we left (and we left early). I guess if you are local and know the area then it really isn’t a problem. I think if we go again we would still probably drive but build in extra time to find side street parking again.

Its a fair walk from the bottom of the race track (next to Alexandra Palace Train Station) to the entrance which is actually up by the palace. The website says its 10 minutes with a little one its nearer 20, and there is a steep hill at the end. Hubby was less than impressed since Monkey was on his shoulders at this point. It caught a fair number of people out who were taking a break on the way up. I feel sorry for those with pushchairs! They allowed pushchairs in and I was pleasantly surprised by the number that were there. They however do not allow chairs in – so do not bring them with you as they will take them away as you enter. Incidentally they do not allow glass bottles including medicine (we carry piriton as a matter of course due to allergies) either.

We had to wait 10 minutes or so to get into the ground as we had arrived prior to 10.30, the queuing was sensible and well managed.

Amenities – As we were near the beginning of the queue (it attracts 20,000 people) we pretty much had the pick of where we were going to set up. We had brought a blanket which proved useful as the weather was a little temperamental and it also meant we could reserve our own space as such, as it does get very crowded. We all know how little ones like to spread out. 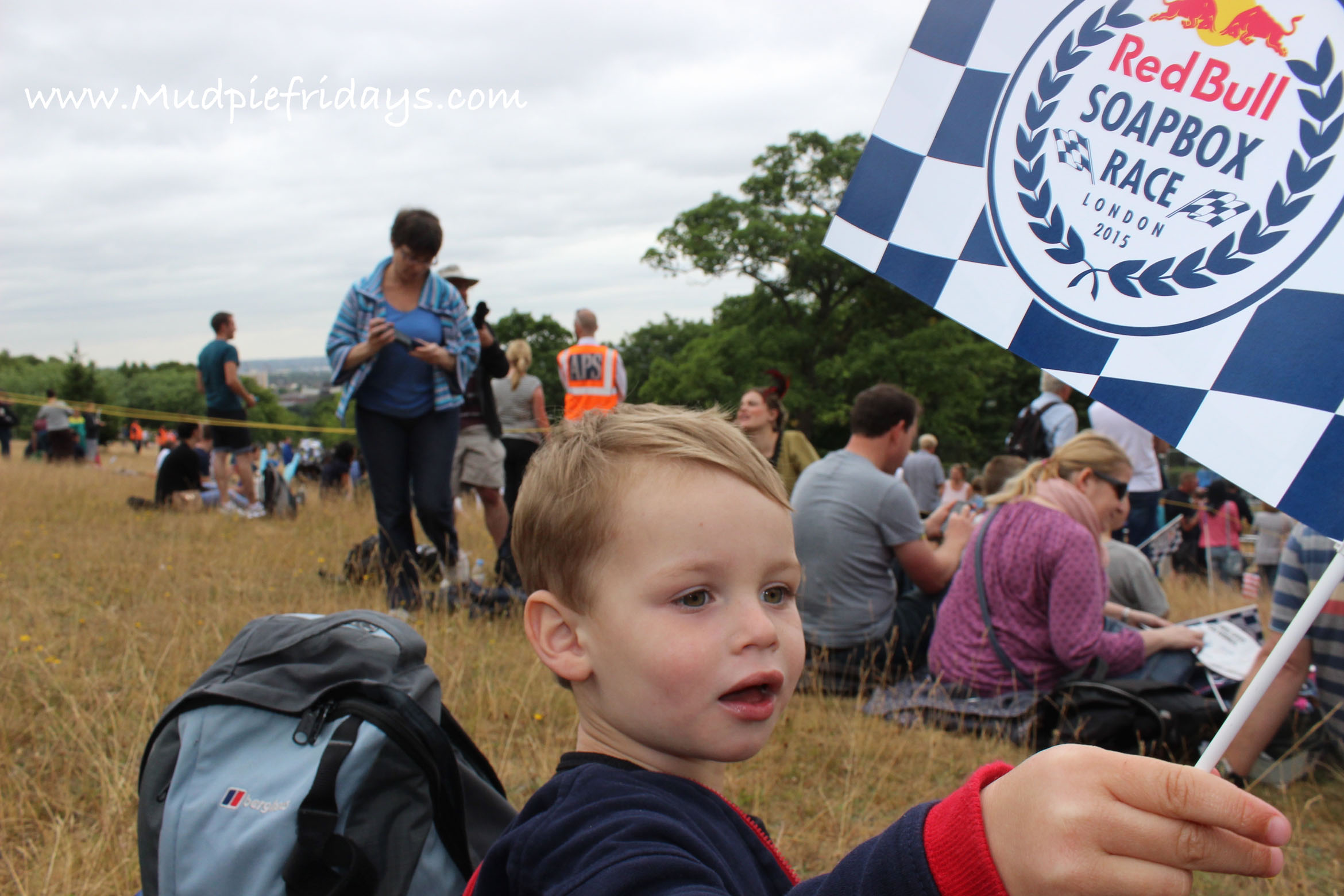 Never having been before we opted to go near the start, firstly its on a hill which means it gave a better vantage point for being able to see. We also wounded if a number of the cars may fail at the first obstacle which was just down from the start – “The Piston’. As we were near the top we were lose to all the food places. Whereas towards the bottom are a lot more of the drinking venues. Plus its reasonably close to the pit lane if you want to go and check out the cars before they head down the track.

Surprisingly not as many as we thought failed at the beginning, I think Hubby would 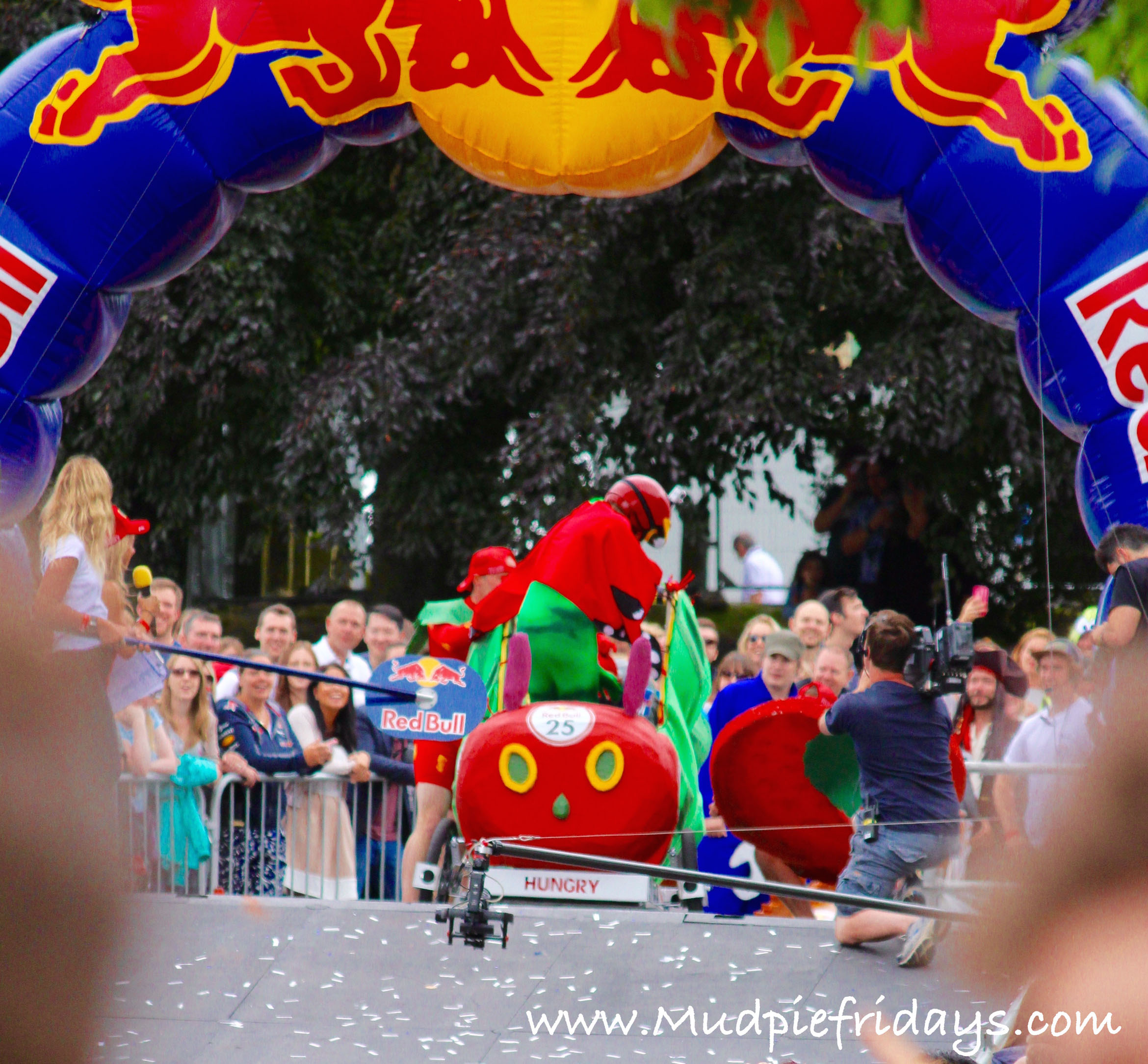 secretly have liked to go towards the end of the race, but with a little one I think we were probably in the best position.

There were plenty of toilets and they weren’t too bad. I also liked the fact that they were handing out little flags to the kids. There was also people walking between the crowds when we first arrived offering face painting. With Monkey’s eczema we didn’t take them up on it, not sure of the price – kind of got the impression it may have been free and linked to the photo booth.

There was a handful of sponsors placed around the garden, next time we would probably visit these a bit earlier as they were giving out foam hands, by the time we realised they had all been given out. Monkey was a little disappointed until we found the ice cream truck.

There was a also a photo booth, where people were getting all dressed up and pulling funny faces, we didn’t give it a go so can’t pass comment but it looked good fun.

Food – There were several different food options. On the tickets it says that you will not be allowed in with excessive food. Not sure what exactly excessive is. We took a few snacks and enough for Monkey planning on getting ourselves something there. We ended up with Burritos which were very nice, but two chicken ones plus two soft drinks cost £18. So its not cheap. There was a stand selling chips with various toppings, a stone baked pizza place and a burger stand. Several coffee places and somewhere to buy alcohol. Picnics seemed to be a popular option for those with families and I think we would probably take enough for all of us next time.

There was also an ice-cream van which went down well!! 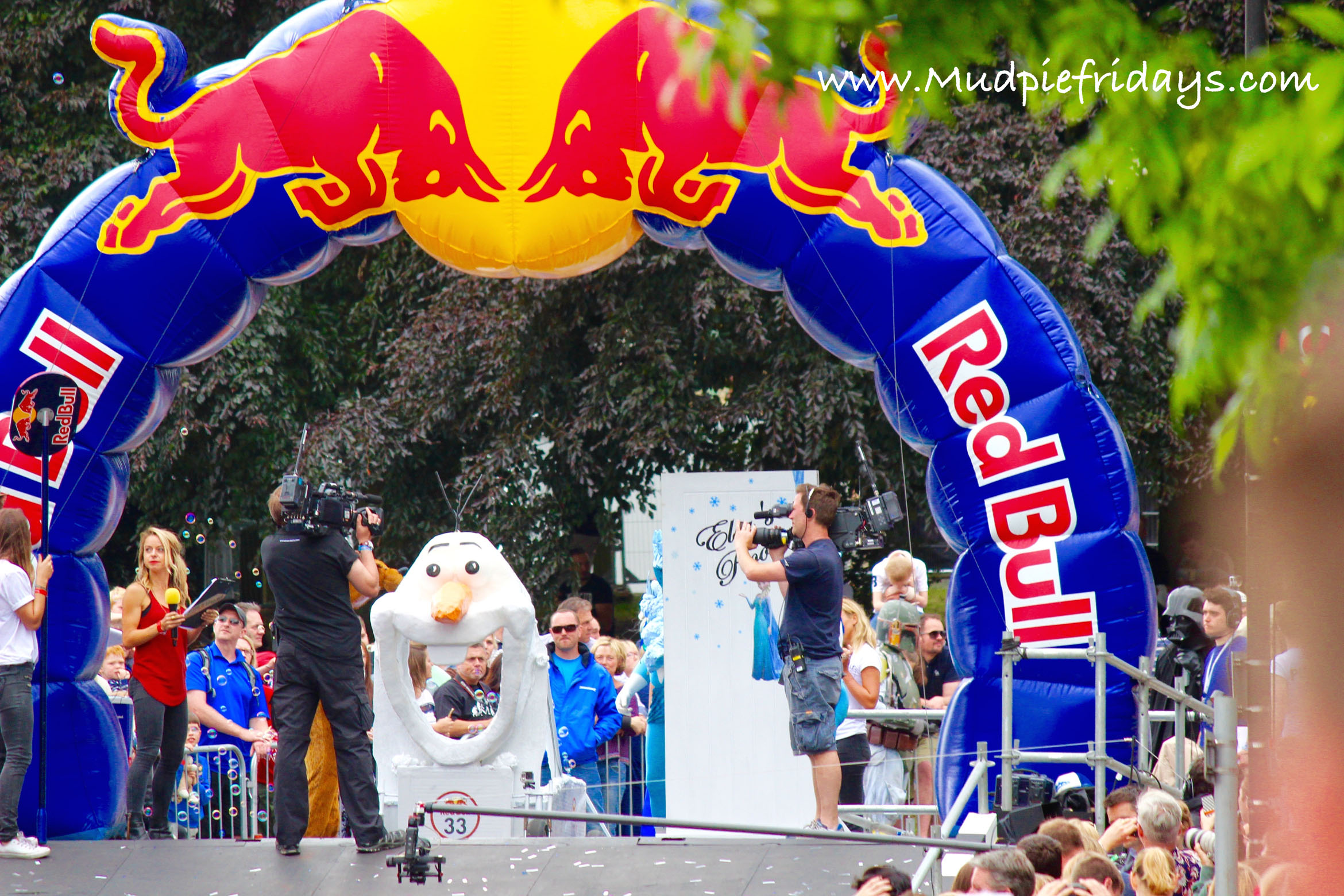 The Race – There were 67 soapboxes in total. We didn’t get stay until the end. We left around car 57 as Monkey was getting bored and Hubby was flying to Germany the next day. But initially he was really interested and to give them credit there was not a long wait between go-karts. As we were on the hill we were in front of a screen so it meant that we could easily see the shenanigans that went on when a new kart pulled up. Each one had a short 20 second performance routine before heading off.  My favourite was the Hungry Caterpillar one, Monkey loved Olaf (theres a surprise) and Hubby the SteamPunk Mechanical Bull – which was very impressive as it actually released steam all the way down.

I was shocked by just how much work had gone into some of them some other notable ones included the The Wonka Factory, Turtle Heads, The A Team and the Lego cart. 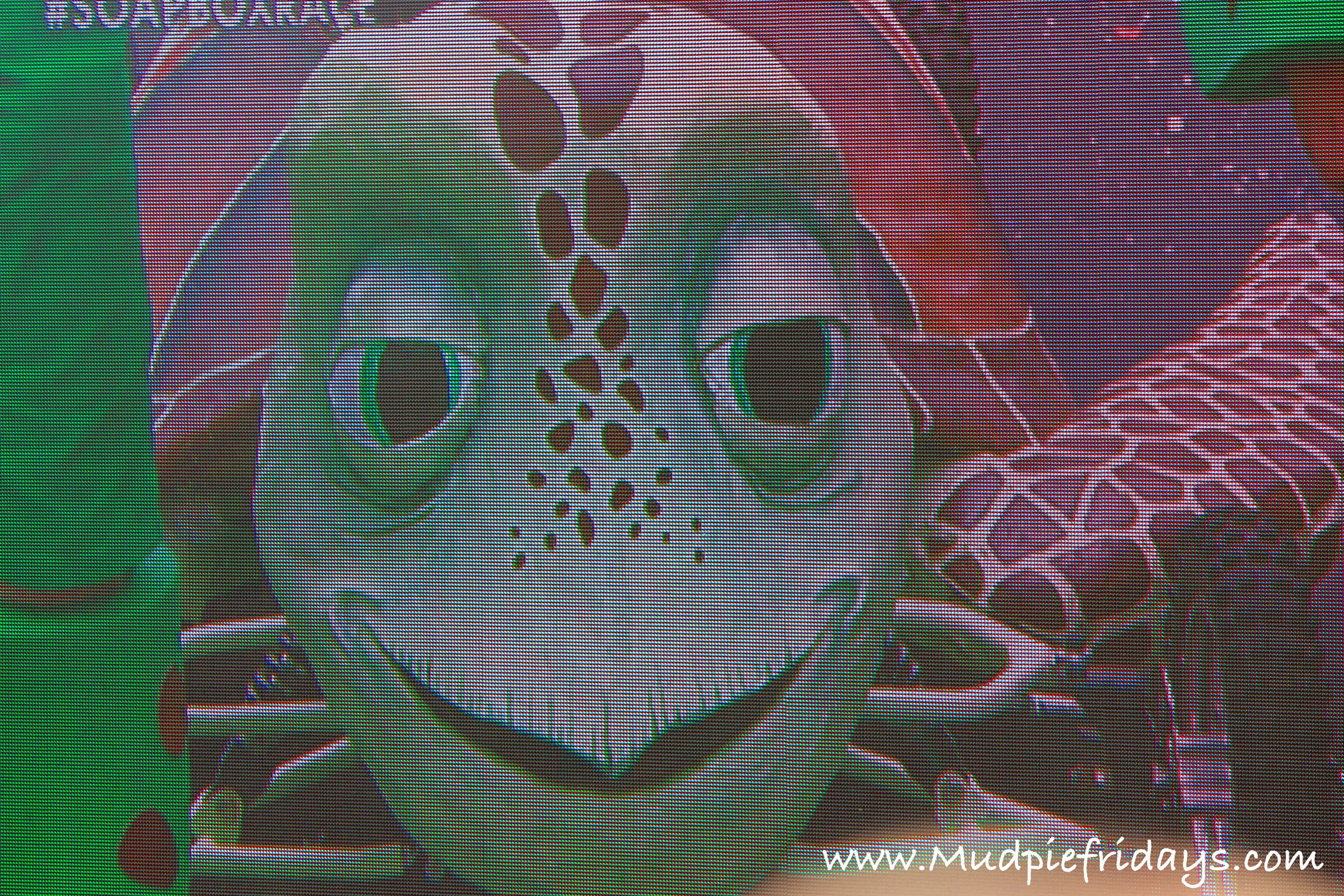 The best bits – Overall it was a great day out, the soapboxes were brilliant, Monkey enjoyed himself. It is definitely doable with a 3 year old, I would probably not want to go with a toddler as it gets crowded so they can’t go off an explore like they always want to do…. We would stand in the same spot. Leaving slightly before the end worked for us, I appreciate people don’t like leaving before the end of an event but 20,000 people heading back out would have been a bit much. Plus its a reasonably long day without a nap!

Things we would do differently – I would take something to keep him amused in the breaks, busy bags or similar and we would take more food and drink. I would also try to get round all the cars in the pit area, which we didn’t manage.

Overall a good day out, I am very glad we went and it is very doable with a 3 year old!

Letter B Activities – A letter a week (ish)