After our visit to The Hop Shop where we picked some delicious apples and also some quince I was determined to make some Quince Jelly. If successful I thought it would make an ideal treat to add to a homemade hamper for Christmas. I say if successful, as we have never made it before. Although we do make a lot of preserves and chutneys somehow Quince Cheese sounds difficult! Originally I was going to make it in a little metal tins and then seal it with food grade wax, however I discovered that our local cook shop did not sell the wax. I was worried that the quince may go off if I left it much longer so we settled on some little Kilner Jars. In all honestly they would suit jelly better than cheese but Monkey had his heart set on cheese so heres how we got on… 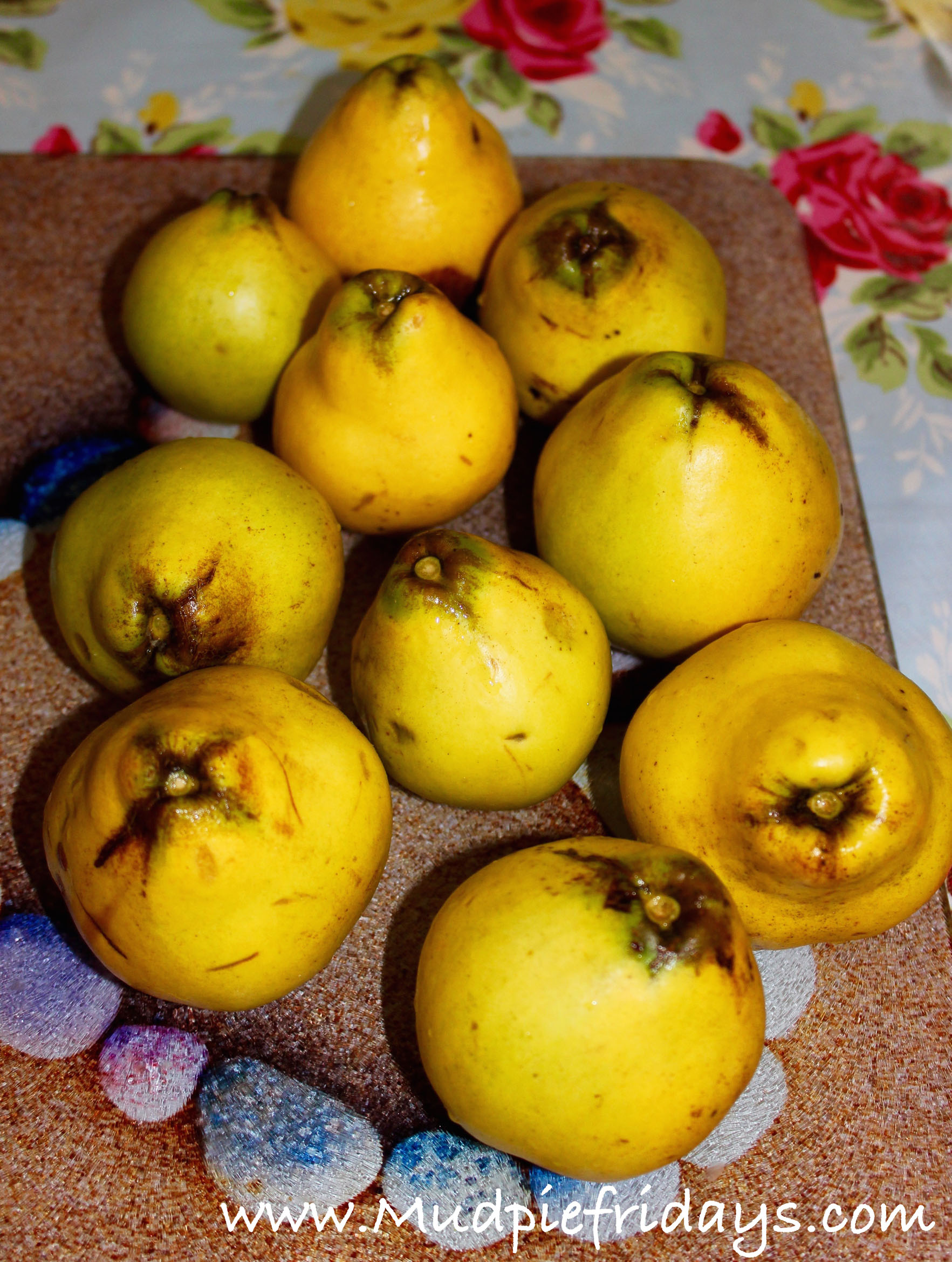 First you need to wash the quince. I also removed the stalks and the leaves at the bottom. Then you chop them roughly, now this could be where I made my first mistake. I’m not sure I cut them small enough. I quartered each and then cut each quarter into two or three depending not the size of the quince. You do not need to core them, remove the skin or the seeds. As once cooked down you put the pulp though a sieve so everything can stay in. Which is just as well as they were much harder to cut than I thought they would be. 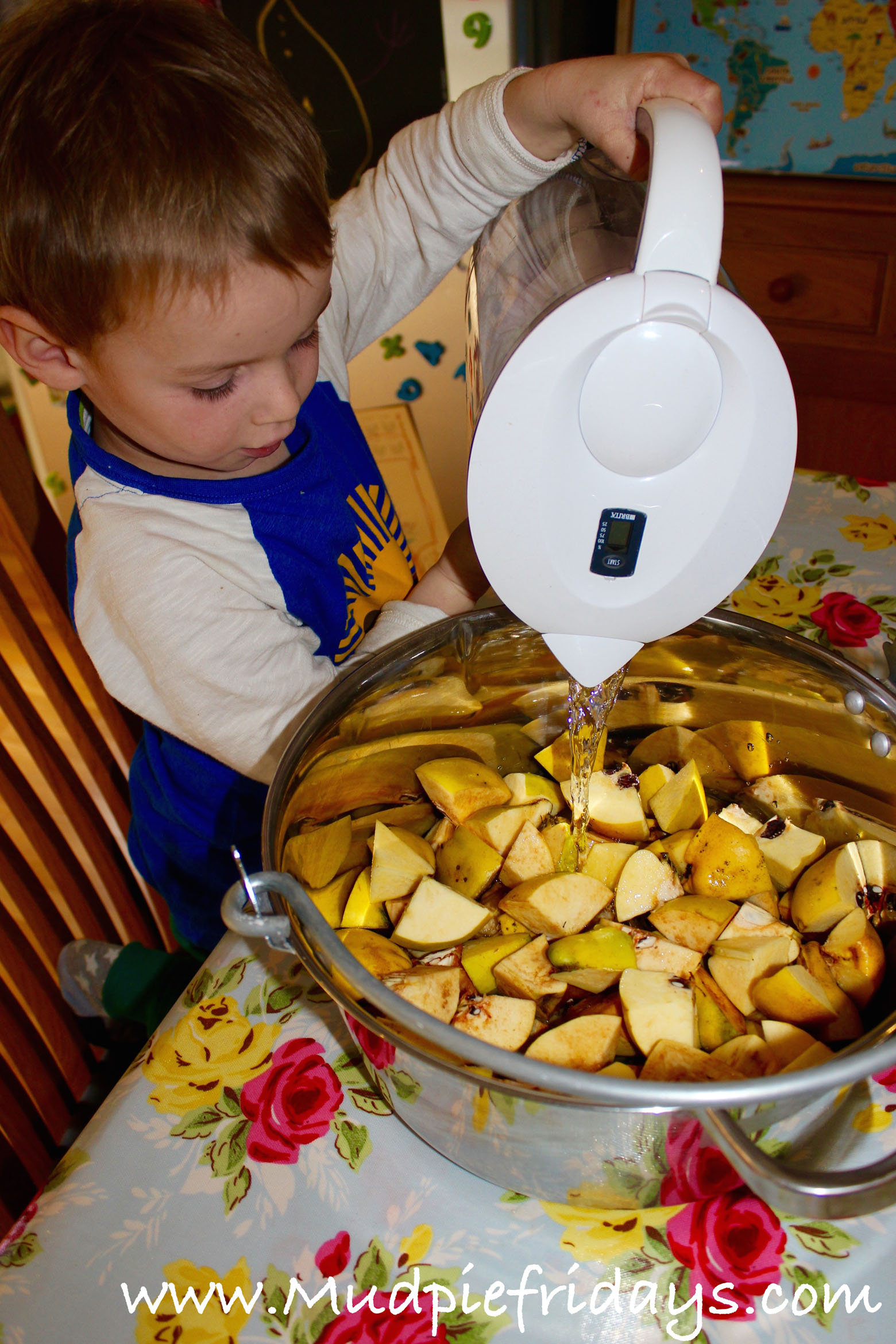 Once chopped Monkey transferred them to the jam pan and added some water. Ideally you only need to make sure the pieces are just covered before allowing it to simmer down to a pulp. In theory this should only take an hour. Which is why I think I may have made a mistake, as it took ours nearer three hours and I had to keep topping up the water otherwise it would have burnt.  Mistake number two, it may have burnt a little!

In the end I took a fork to it and started to break it down myself. By this time it had turned into an orangey colour. I left it to cool down over night, and then with the help of Hubby passed it through a sieve using a spatular. It was easy to do and generated a lot more pulp that I imagined. 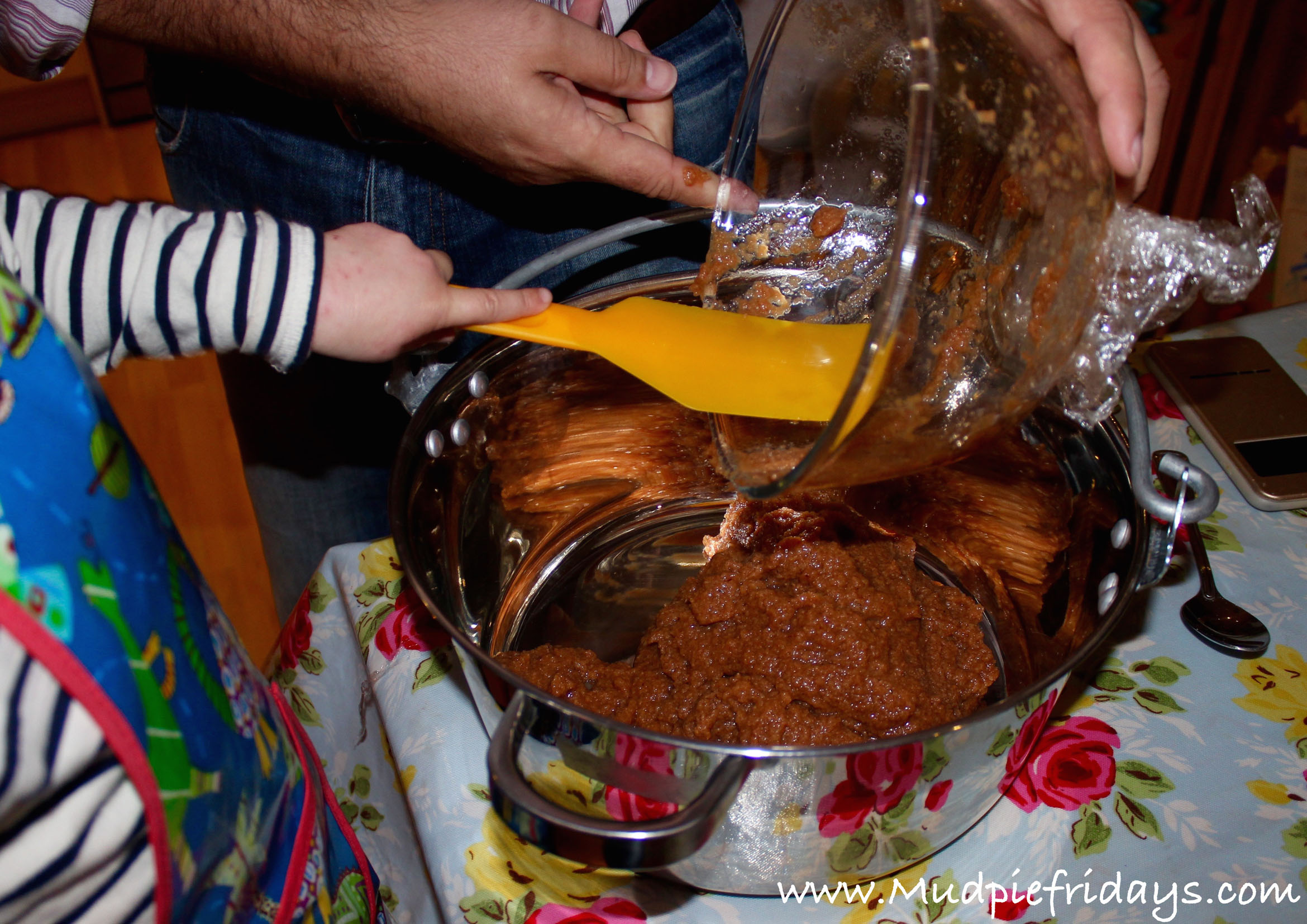 Once completed weigh the pulp  and return it to the pan before adding an equal amount of granulated sugar. Monkey was eager to help out again, so he added the sugar and then enjoyed mixing it together to make it disappear. 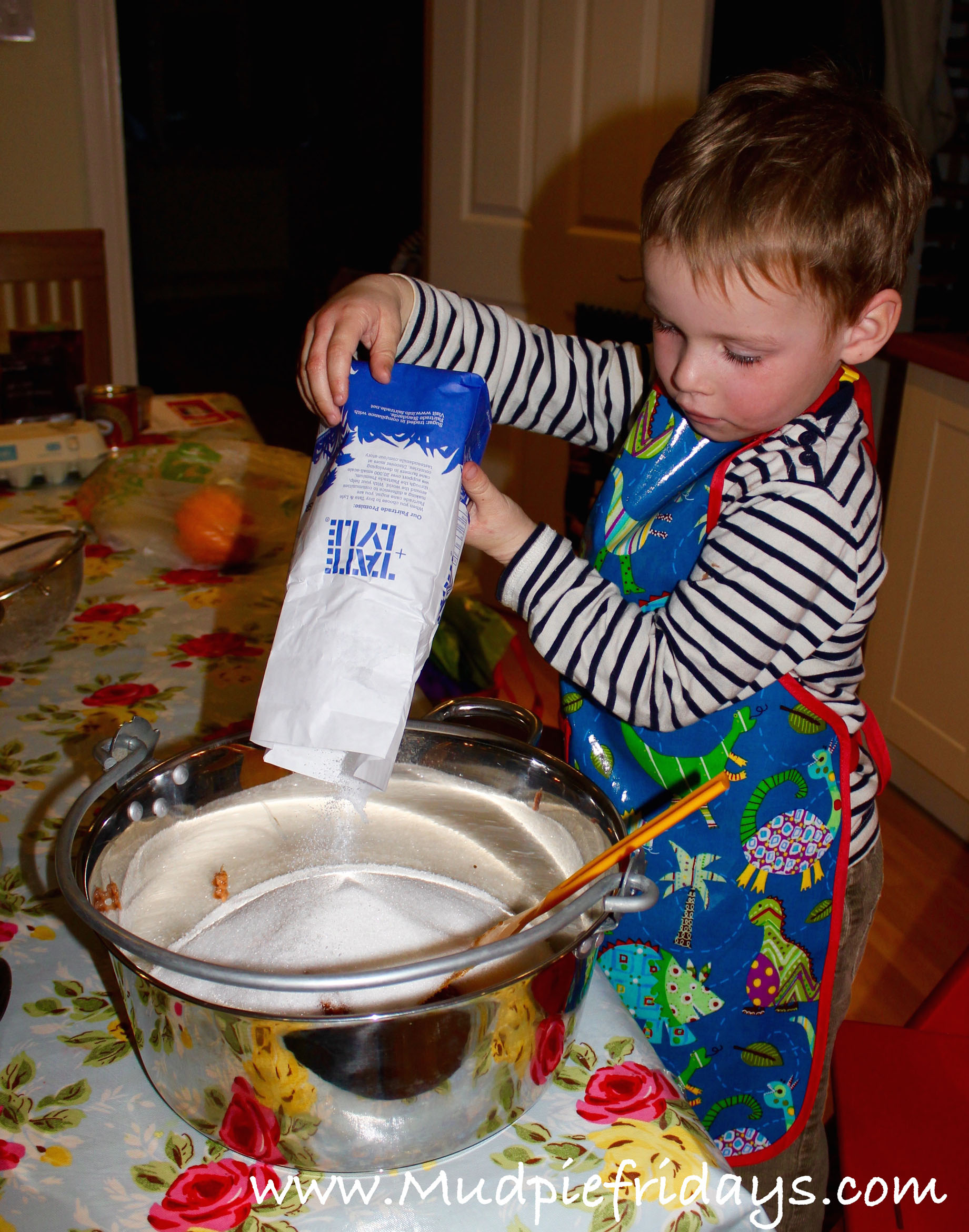 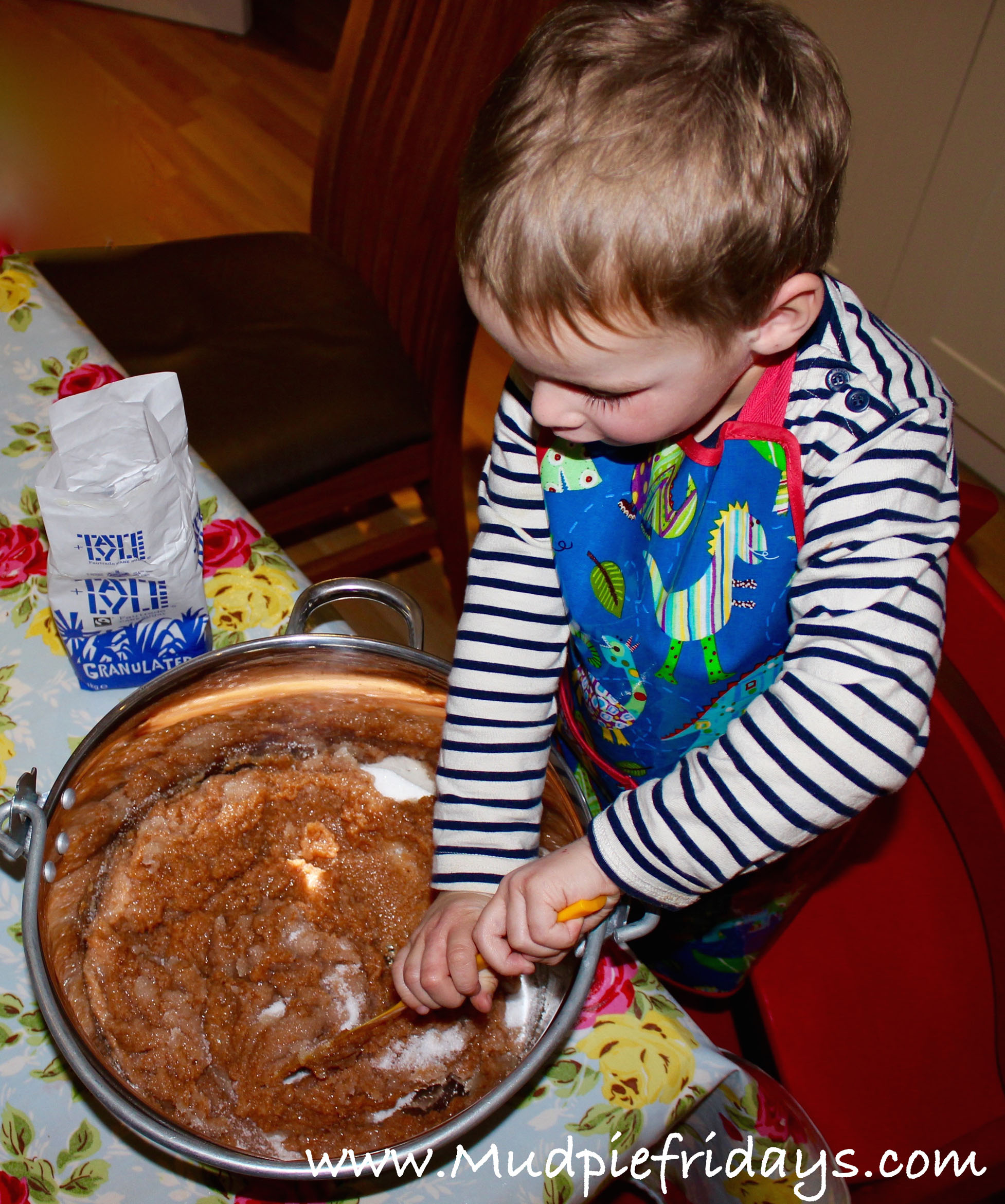 Once it has been throughly mixed together it can go back on the heat and brought to a simmer. You need to let it simmer for about an hour. Although you will need to stir it constantly until the sugar disappears and then regularly afterwards, otherwise due to the high sugar content it will stick and burn! We managed to catch ours just in time. Its ready when you draw a straight line across the bottom of the pan and mixture doesn’t spring back straight away.

It took a lot longer than I thought it would to make, but even with our little mistakes it tastes as it should so I think it was a success, I guess we will let the reciprocators decide.

I would love to hear about your favourite recipes in the comments below.