While we were at Bluestones we took the opportunity to visit some of the local beaches as the weather was glorious and we wanted to make the most of it.

The ones we visited were: We headed here on a bit of a whim Hubby had seen it and wanted to test  it out. It is only a few miles from Bluestones and only took about 15/20 minutes by car. As you come into the village you get the option to head towards the South Beach or the North Beach. We decided to head North which feels like you are being taken away from the village and the beach. However you will see a sign for a large purpose built carpark a few hundred yards down the road. Its a pay and display carpark and has a cafe as well, although we didn’t visit it, instead heading straight down to the sea. There is a reasonable flight of steps which takes you right down onto the beach. 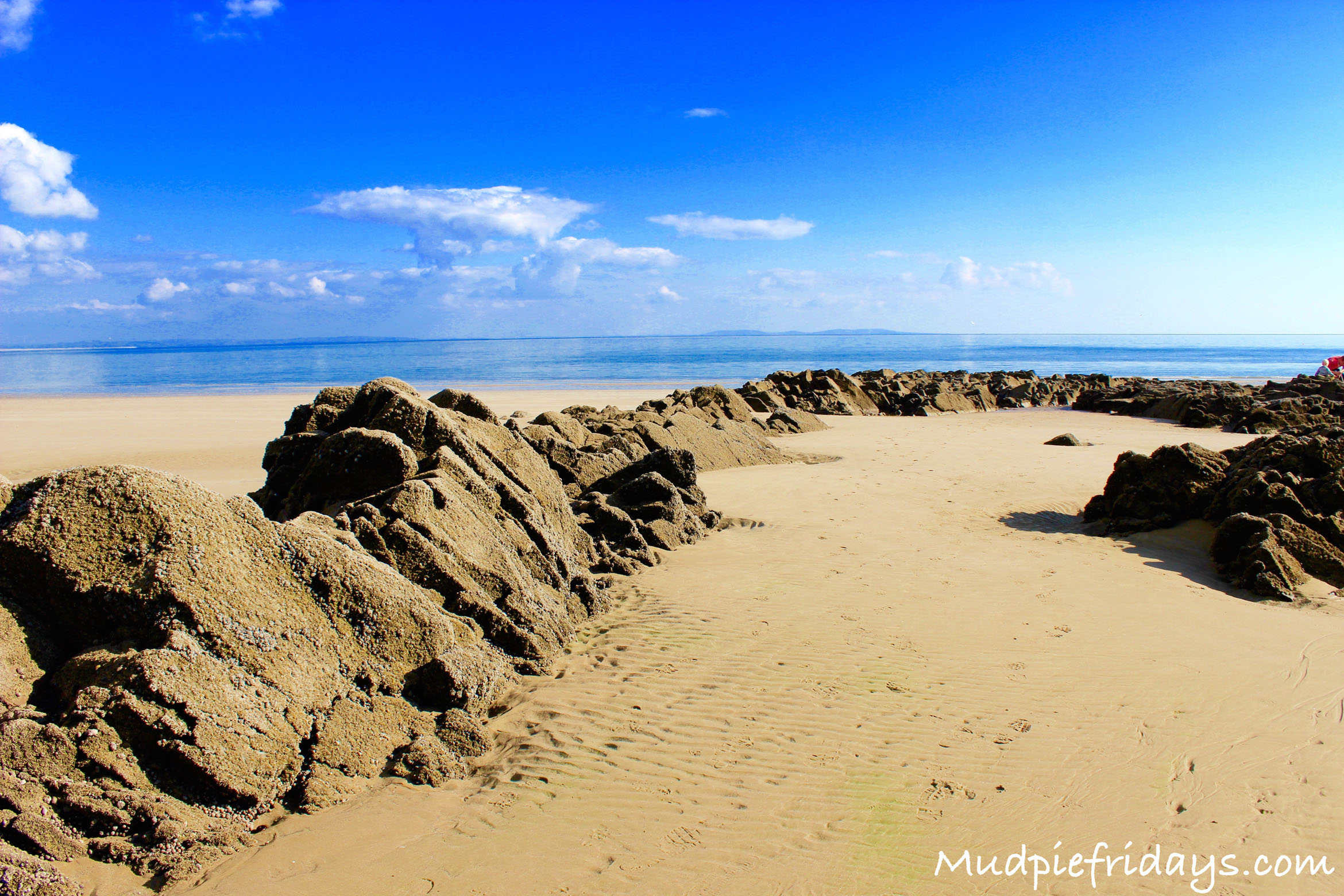 Where we were was unspoilt, it looks as though there might be more of a promenade towards the South area. However Monkey was more fascinated with the rocks that the receding tide had left behind. They were covered in barnacles and muscles with plenty of rock pools, Hubby set about finding razor clam shells straight away. We kicked ourselves that we had left the net at home! There were crabs and little fish as well as anemones and even a rather dead looking dog fish! We had only put an hour on the car because we had planned to go onto the Tenby and it went in a flash. Monkey had a lovely time climbing on the rocks and investigating the sea life. It would be a great spot for a picnic. From Saundersfoot we took the short drive to Tenby and parked in the town centre in the carpark which was the closest to the beach. Again it was a pay and display. It looked like a lovely little town and if we had, had more time then I would have loved to explore. Instead we headed straight to the beach. There is a very steep cliff face with concrete steps and a hand rail, we managed with Monkey but if you had really young ones you would need to carry them and its not suitable for buggies. However once on the beach this is the view you are treated with when looking back. Its is very pretty and a vast beach! The tide was on its way out when we visited and left behind sand which was really soft and sunk away so it was fun leaving footprints behind. We took a walk along the shoreline to the fort. Monkey had noticed a cave and wanted to explore. We weren’t really prepared with rugs, buckets and spades so couldn’t really build a castle so it seemed like a good option. He enjoyed running back and forth on the walk over. To be honest it was nice to get out in the sun, and it was so warm we didn’t even need a coat, Hubby was walking around in a T- Shirt in October!! Once we got to the cave, Monkey had second thoughts and we had to convince him to pose for a photo. Might be something to do with the troll stories that Hubby had thought up on the way over!! There were a couple of other caves as well although smaller. The stones and shells found in the caves were a lot bigger that other parts of the beach. We found some shell pictures which really interested Monkey and he insisted we made our own. It was possible to climb up to the fort although we didn’t as Monkey was getting tired. Of course we did have time to stop by a little cart selling ice cream, which we greatly deserved after the climb back up. Although Monkey did insist on having the ‘blue’ one! I will never like the bubblegum flavour! On the day we left we decided to pay a visit to Llantwit which is on our way home and a village which I actually spent the first three and a bit years of my life living. I wanted to replicate a picture I have of my Father and me on the beach when I was a toddler, although Monkey is a bit older than that now!! The beach itself is about a mile away from where I use to live and down a single track road. There is a small carpark, toilets and a cafe. Other than that there is a beach full of grey stones, its quite unlike any other beach I have ever visited. It does make access reasonably difficult, again it wouldn’t be any good with a buggy. Monkey was okay balancing although in places he needed our help. Its quite stunning really (although I am biased). 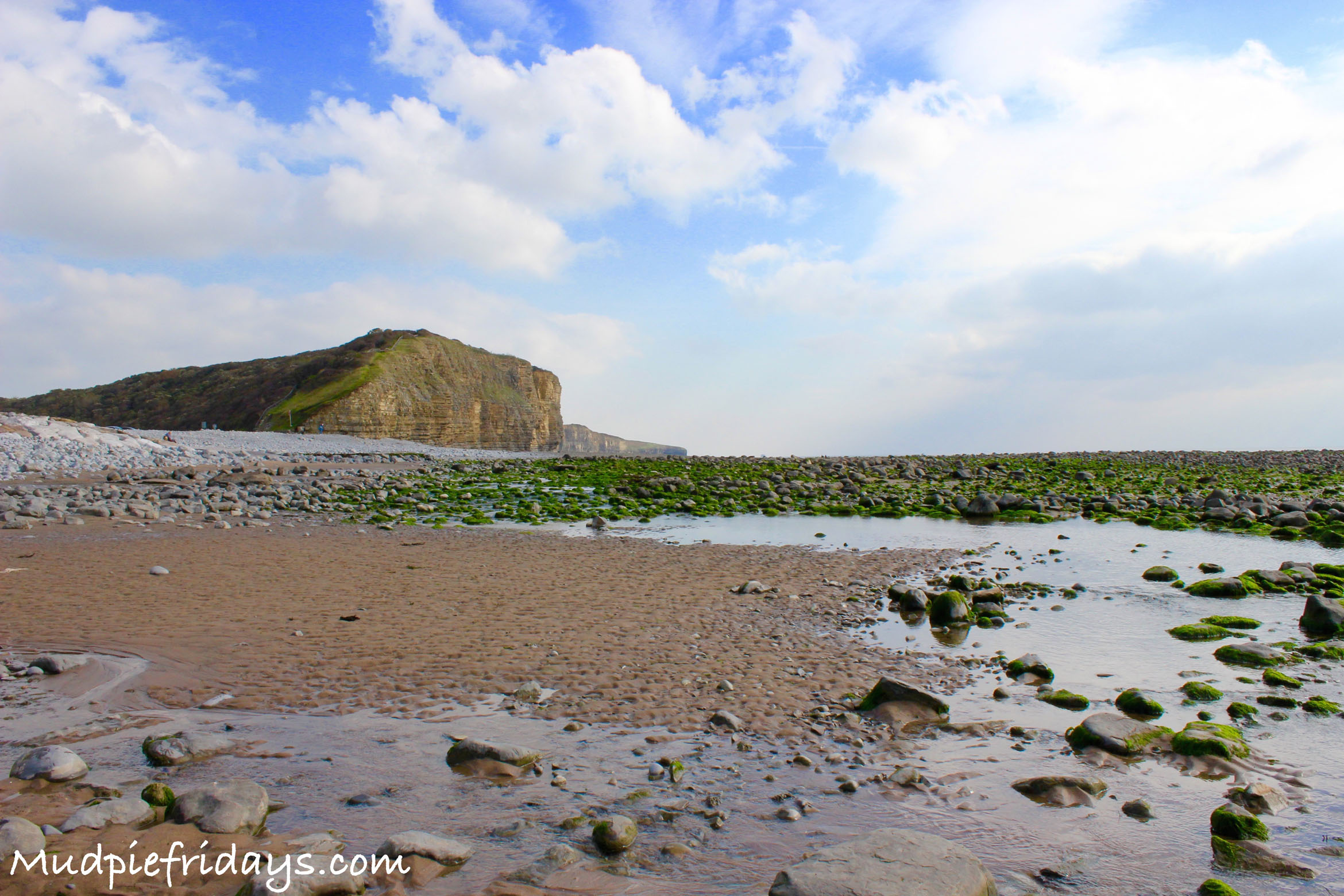 As the tide was out some sand was revealed although it was very wet so we couldn’t build anything! But Monkey had fun splashing about and digging in it with his wellies. Many of the stones had green seaweed on them and soon a game of stepping stones broke out, especially as Hubby did not have wellies on and didn’t want wet feet! It was a nice trip down memory lane. I am not really sure if Monkey got that I lived there when I was his age, he is still trying to get his head round the fact that Nannie is my Mummy and Grandpa is my Daddy. A fact which is made harder by the fact that both my parents have remarried. But selfishly it was nice for me to relive some childhood steps. 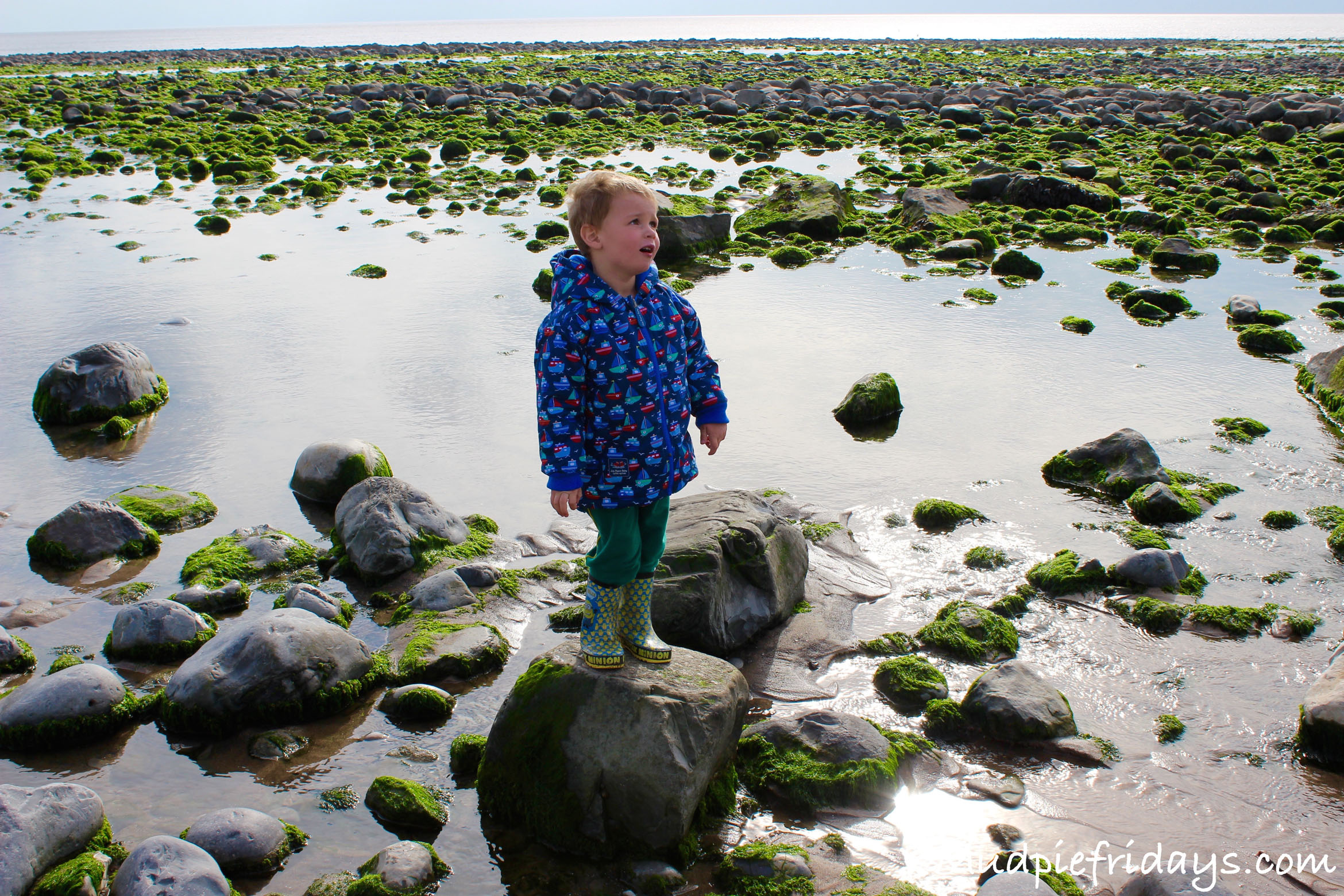 Do you have a favourite beach?