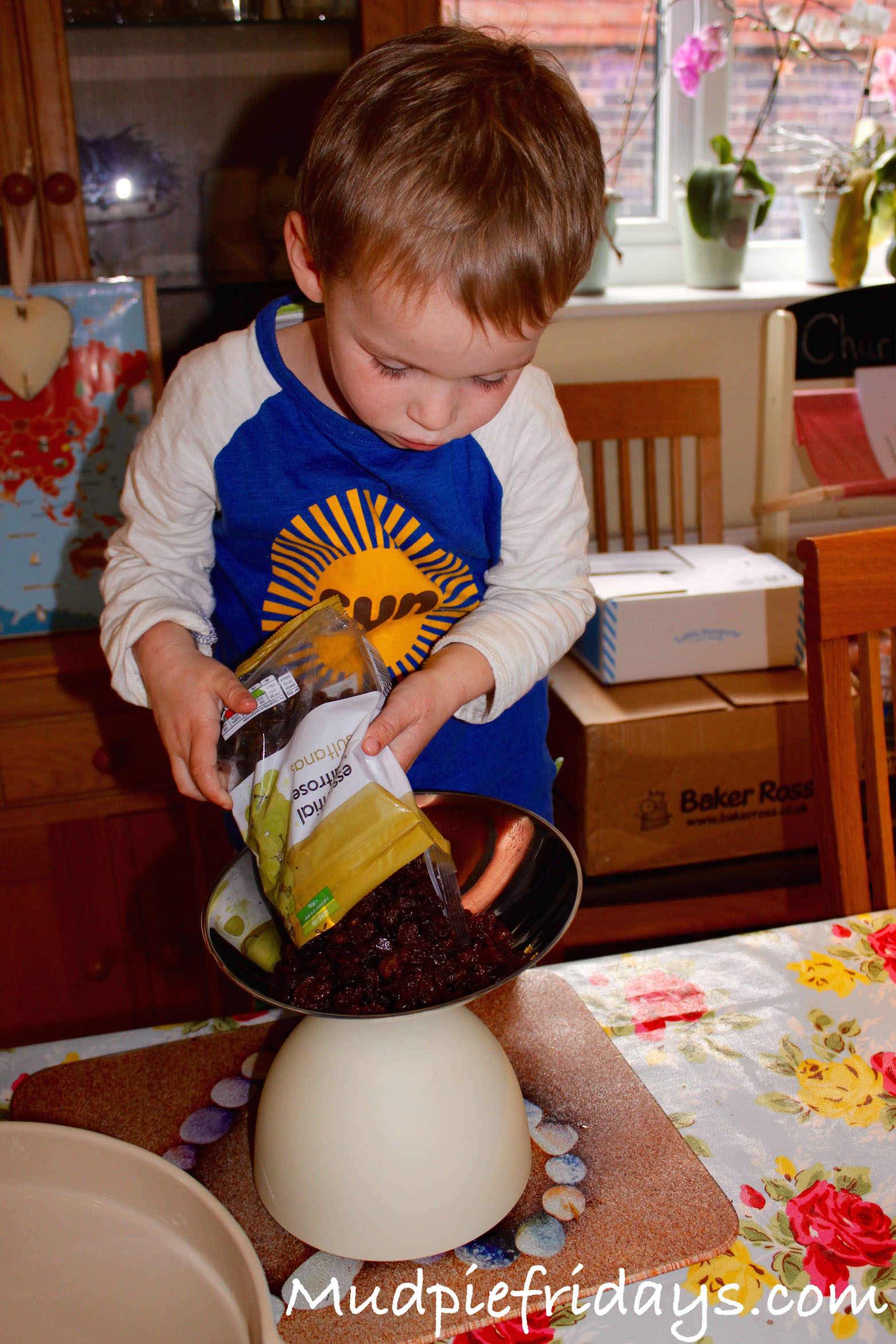 This weekend we decided to finish off the Christmas Puddings. We started when we made the Christmas Cake, soaking the fruit at the same time but with puddings it can be left for longer (we left ours for a week). Making the Christmas Cake and Christmas Puddings is something I use to do with my mum as a child and a tradition I want to carry on with Monkey. The recipe we used this year can be found on Nigella Lawson’s website here, its not one I have tried before but it sounded indulgent just right for Christmas. Like with Christmas Cake its a great recipe to do with kiddies because it involves so much measuring and weighing which mean they can help out a lot and learn their numbers at the same time.

Initially we weighed the dry fruit and chopped the cherries before adding them to a jug with the all important Sherry (plus a little extra). Just be careful when you are picking the prunes off the shelf as I didn’t realise Monkey 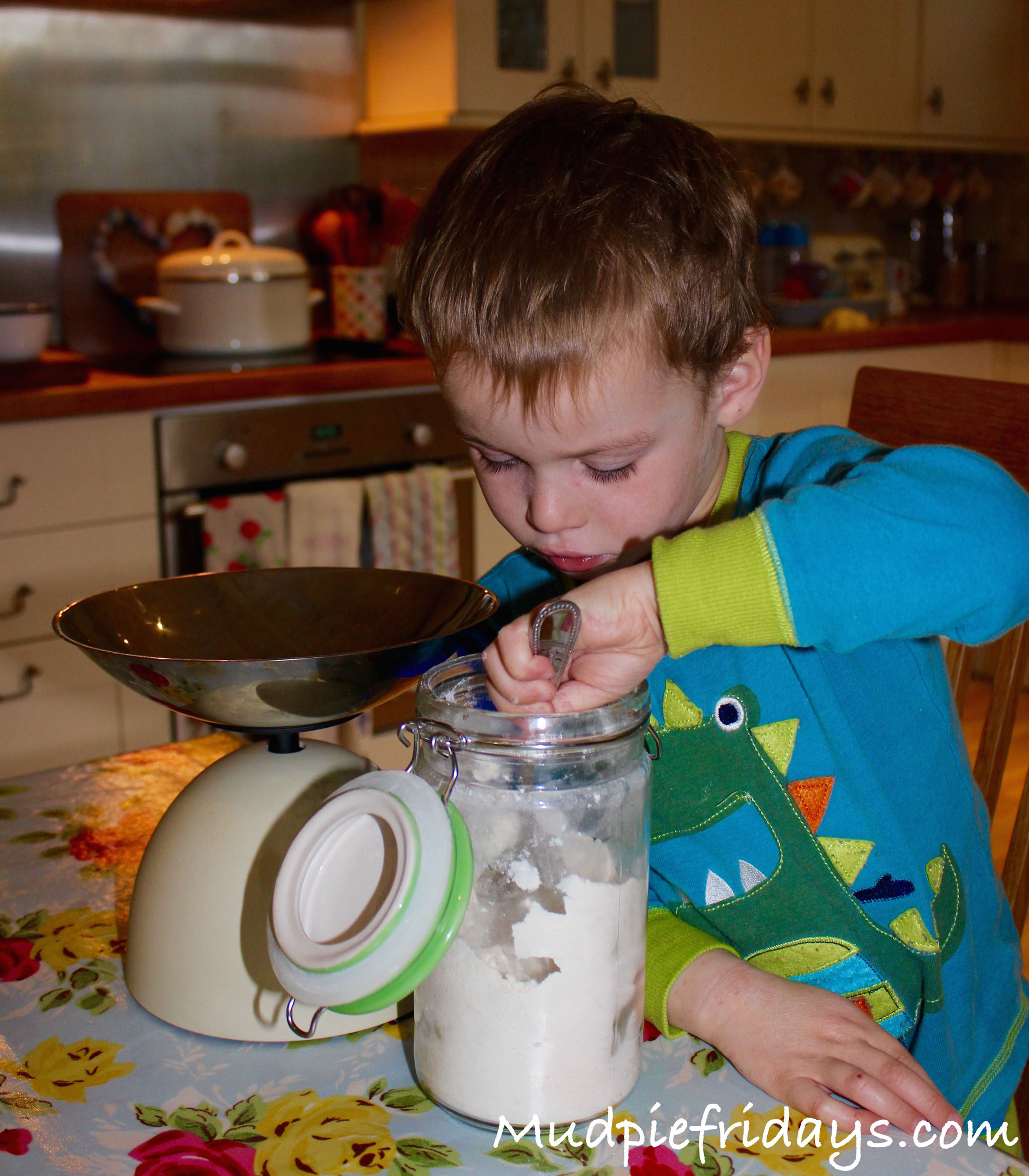 had picked the ones up with stones in!

The recipe is for a three litre pudding, the bowls we had from pervious years are only one litre each. So the plan was to make three, one for Christmas Day, one for Boxing Day and one to save. However either something went wrong with our calculations or the bowls are a little bigger than one litre as we only managed two puddings. 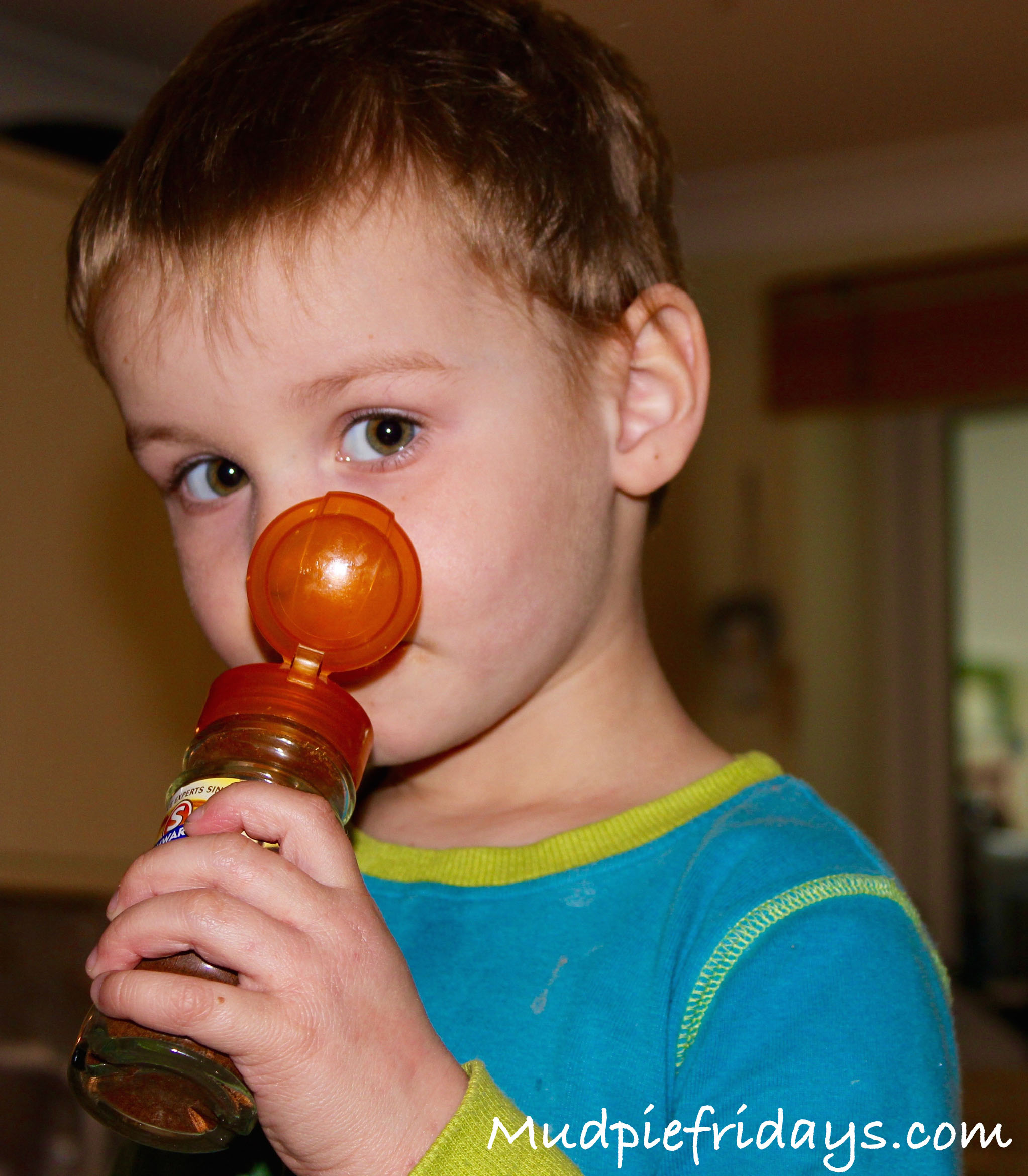 It is a very straightforward recipe requiring you to combine the rest of the ingredients together. First Monkey helped to measure them out – flour, bread crumbs, suet and the dark muscavado sugar. He had never seen suet before and was quite interested in it wanting to eat it – yuk!

As far as the spices and baking powder was concerned I did the measuring of these just incase we ended up with a little two much. Monkey particularly liked the smell of the ground cloves. 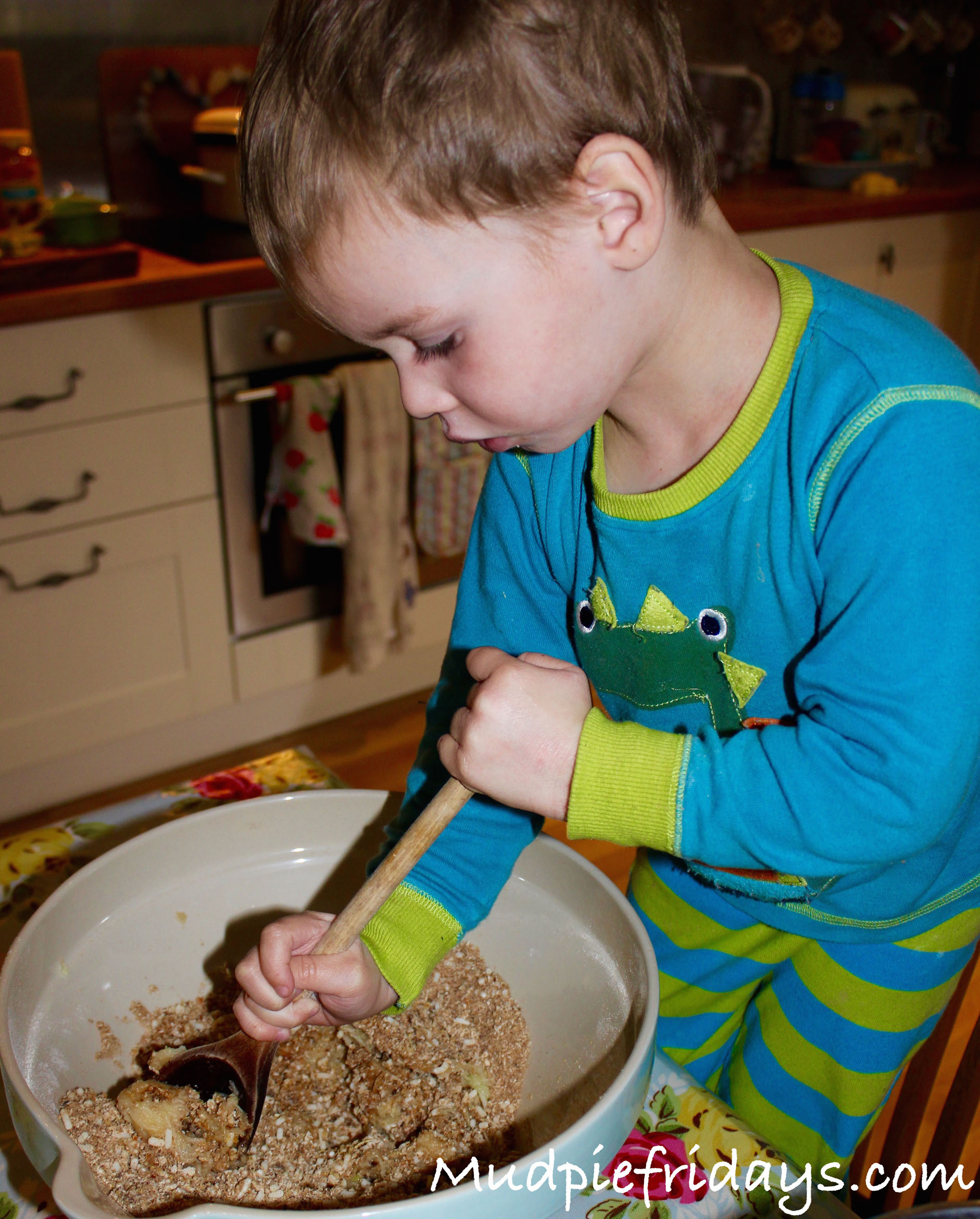 Monkey had fun trying to combine all of the ingredients into the mixing bowl. It was easier for him to mix than the Christmas Cake due to the amount of dried ingredients. Once we added the eggs and the dried fruit I took over as it had got a little harder.

The pudding bowls need to be buttered before the mixture goes in. We had also put a pan of water on the heat when we had started, as you need to steam the puddings. Depending 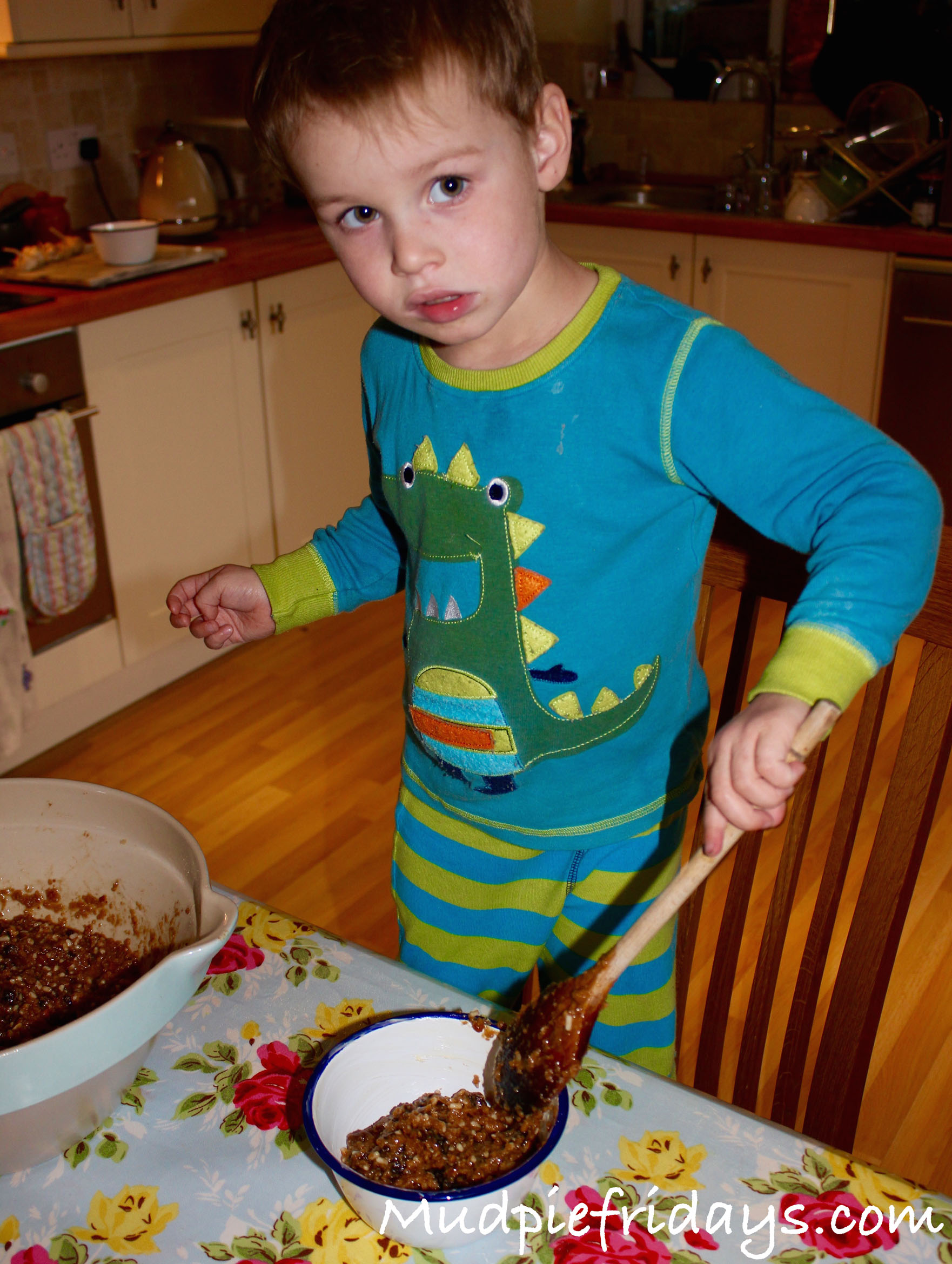 on the size of your bowls will depend on how long they need to be steamed for.  We worked out a litre pudding needs a one hour and 40 minutes. Monkey of course helped to put the mixture in and then we called on Hubby’s skills to cover them.

He put a piece of butter parchment on top of a piece of foil (butter facing upwards) before folding a pleat in. This will allow the pudding to breathe during the steaming process. It was then secured over the top of the pudding bowl with string. Plus I found something to do with Monkey’s old muslins. By tying them around the bowls it means that they are easier to get in and out of the steamer/water. 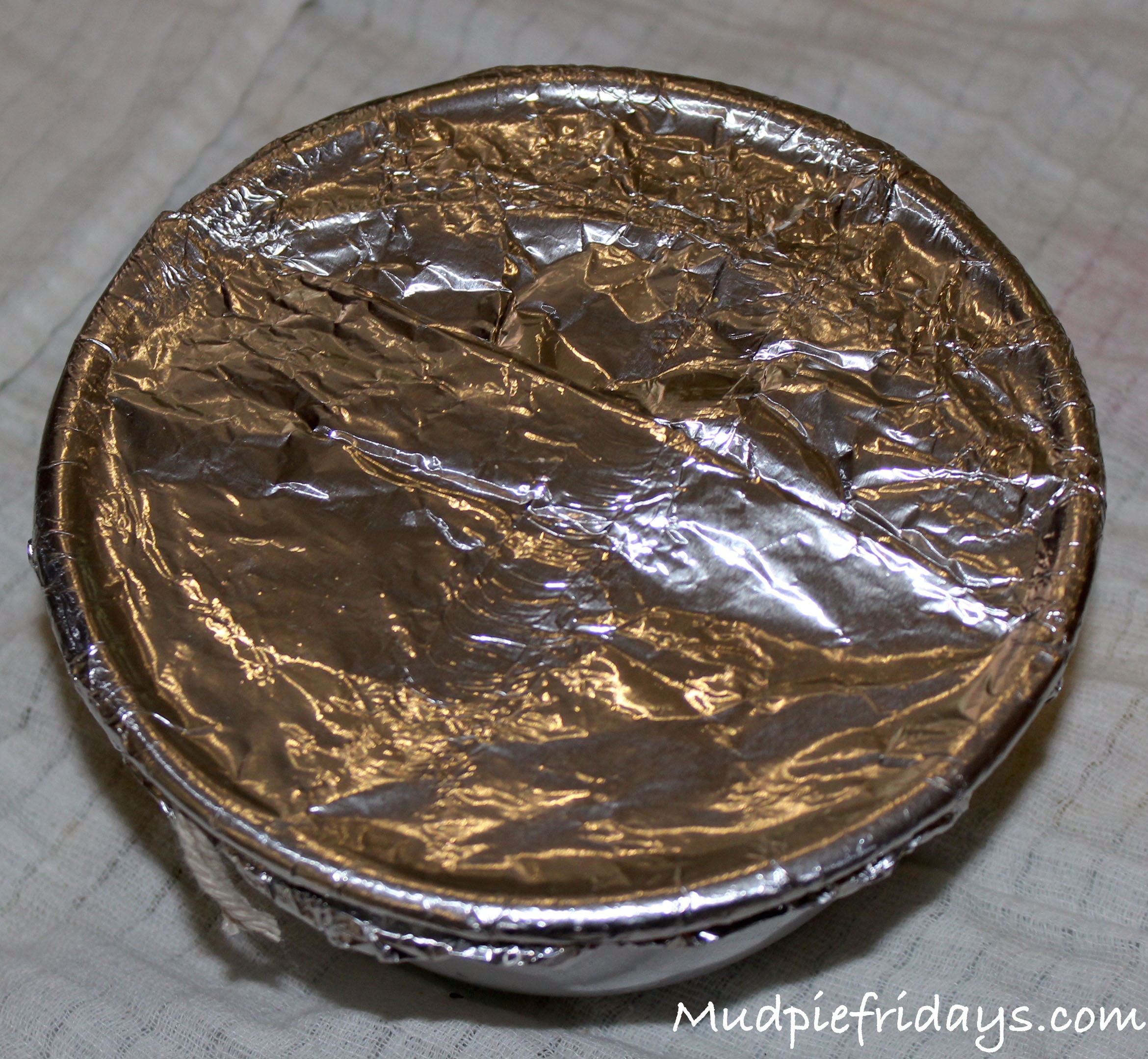 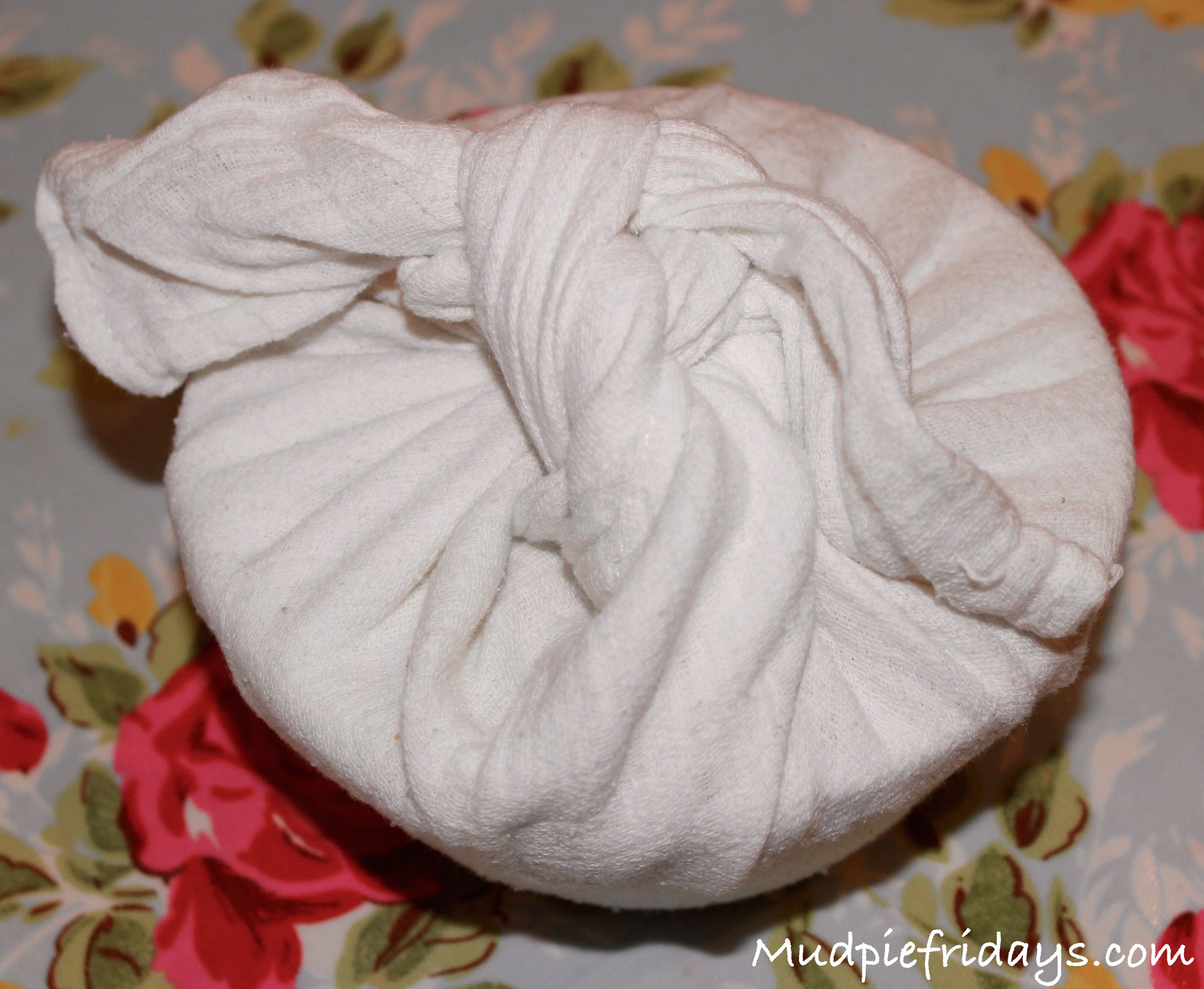 Hopefully they will taste delicious on Christmas Day. We replaced the paper and foil with new versions so they are ready for steaming further on the day.

Do you make your own Christmas Puddings? 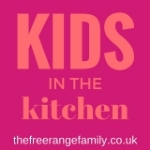 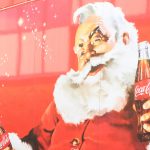 25 Advent Activities for a 2 year old