While we were in Devon the week before last we took a trip down to Cornwall to visit the Eden Project. Hubby and I have visited before when it was still very much in its infancy so I was really looking forward to taking Monkey and seeing how it had grown since our last visit. Plus my photography class is learning all about Macro so it seemed like a perfect chance to get some interesting pictures too.

When Monkey saw the Biome’s he suddenly became very excited, he’s not seen anything like them before (our small green house doesn’t cut it!) and wanted to go an explore them straight away. 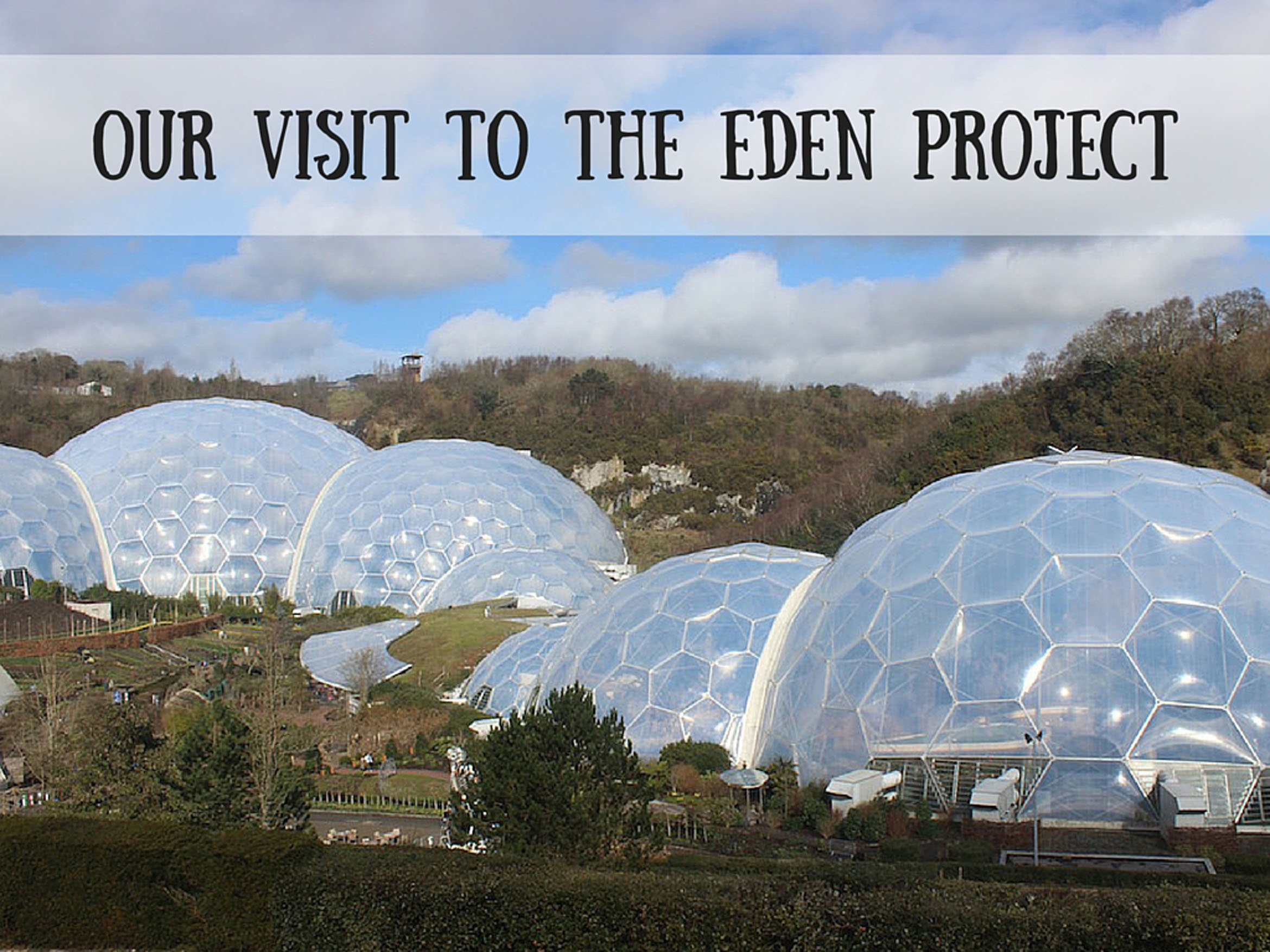 As its early March and the weather has been less than consistent we decided to have a looks around outside first. Many of the plants are just waking up from their hibernation this time of year although there are plenty of spring flowers and rows of daffodils and white tulips inserting colour into the green slopes. The area looks vast but its actually very easy to walk around, we picked up a map and investigated some of the play areas first since Monkey had been cooped up in the car for a couple of hours it was good for him to stretch his legs.

There are several play activities scattered throughout the site, they also have a really good page on their website which is worth viewing if you are planning on Visiting with kids. Monkey was fascinated by the vegetable area, even though its March there was still garlic, swede, cauliflowers, sprouting broccoli and leeks. We grow veggies at home but to see them on a larger scale was great. 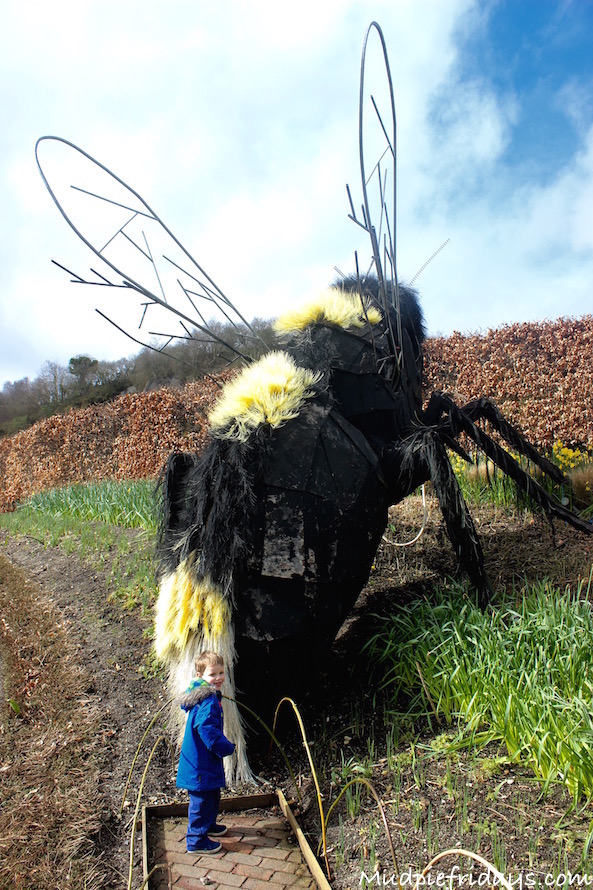 We also met a giant bee on our walk towards the larger of the two Biomes. Monkey was drawn to it as it was very tactile although it was quite funny watching him go up to stroke it. He was a little nervous of it and needed some encouragement.

To access the Biomes you enter through The Link which is where the main restaurant is. It has inside and outside seating areas, a jucie bar, toilets, shop (stock up on liquid for the rainforest Biome) and a cloakroom. We only spotted the cloakroom after we had walked around the rainforest. Its free and I would highly recommend using it as the temperature in the Rainforest Biome when we visited was up at 31 so carrying coats and layers round can be a bit of a juggling act.

As you walk into the Rainforest Biome which is the largest of the two it really feels as though you are going sub tropical with ripening banana’s hanging high up and large leafy plants. I love the educational nature of it, there is so much information available throughout, even with Monkey only being three and a half there was still lots to keep him entertained. He loved finding out about the canoe plants in particular 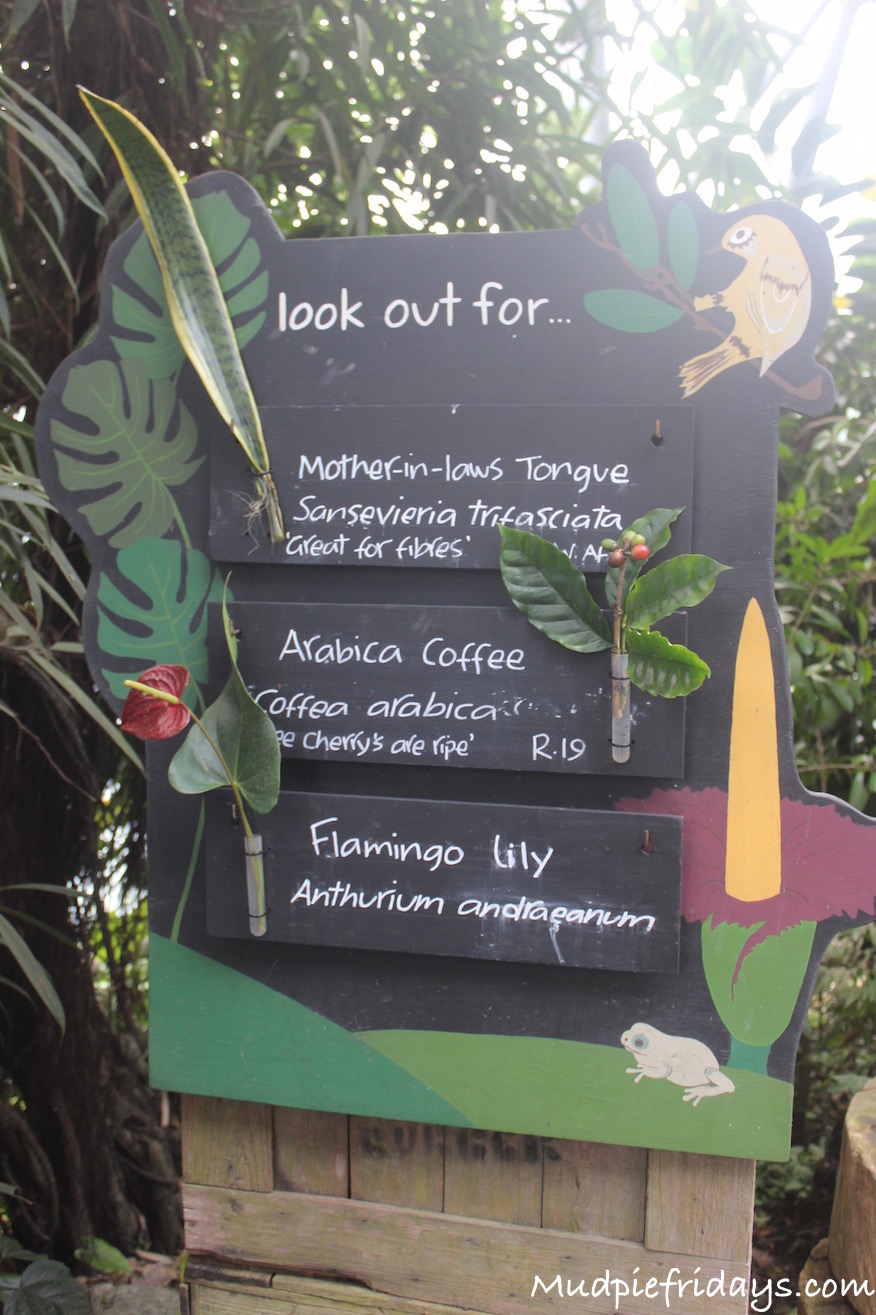 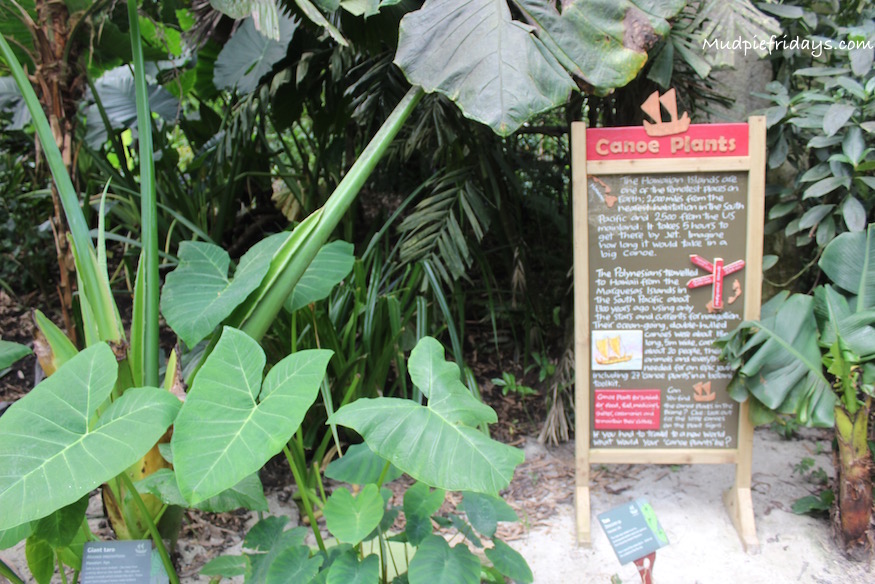 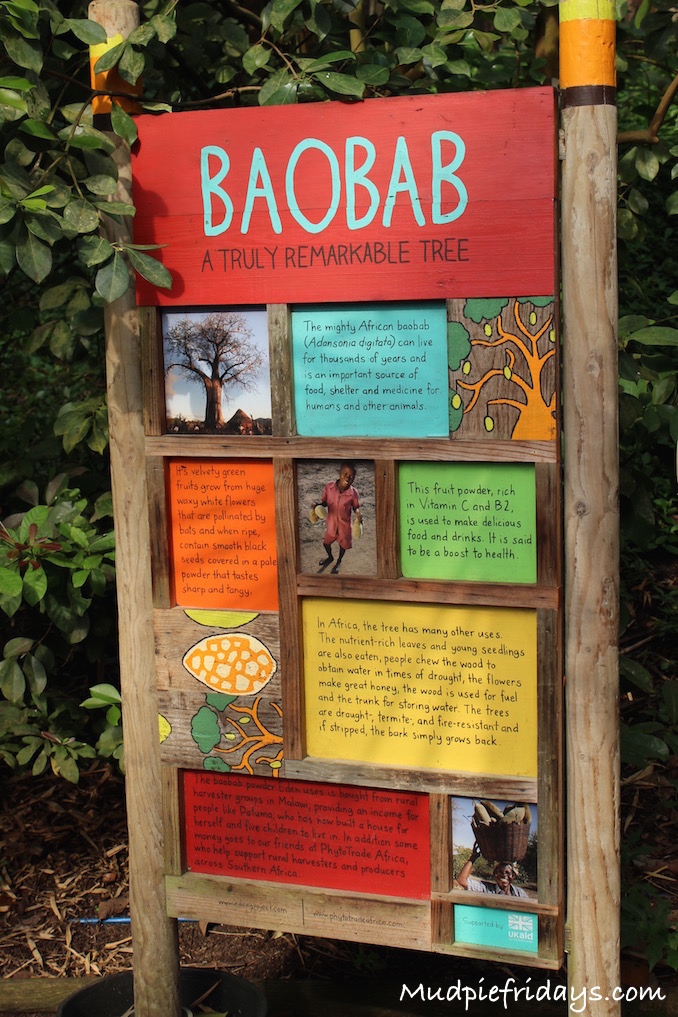 He also liked looking for the little birds which have been introduced to keep the insect population down. We took a steady walk up to the waterfall stopping to investigate the various exhibits on route. 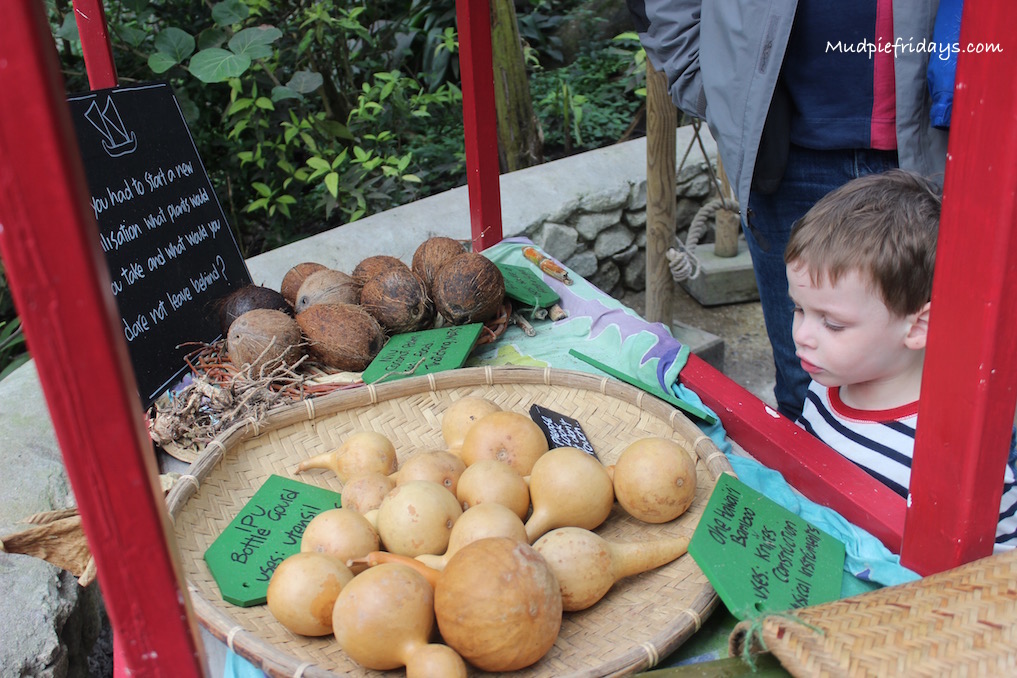 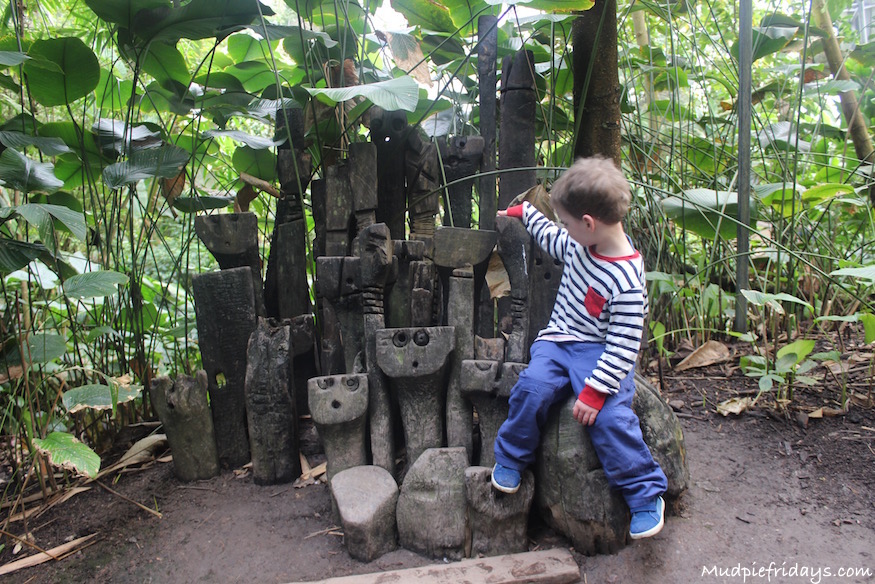 At the top of the Biome they have built a walkway which means you can get above the tree canopy. Its only operational at certain times of the day and if it gets too hot then you will not be able to visit. They suggested that as I was 31 weeks pregnant it was probably not a good idea for me to walk up the 84 steps to the top. So Hubby took Monkey while I took the weight off my feet. He got some great photos and Monkey really enjoyed the view. 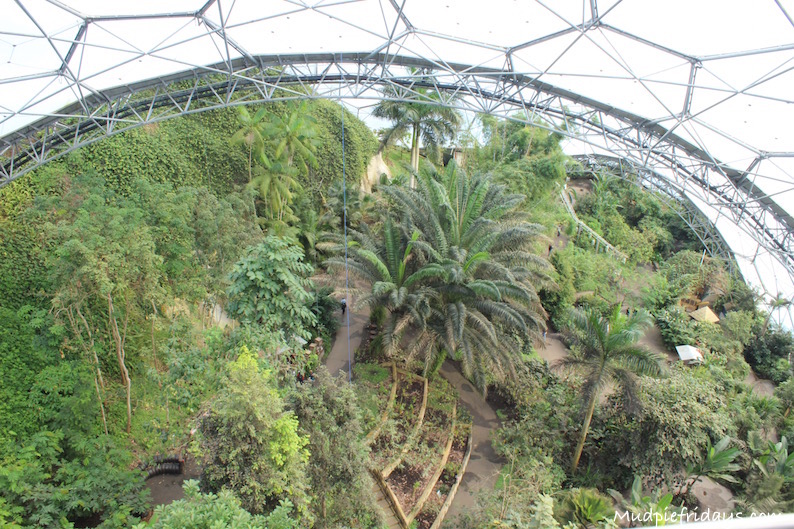 When they came down Monkey was very hot sot I decided to leave him in his vest for the rest of the visit. As you come down from the top you pass a Baobab bar, serving drinks made from the Baobab tree. I would have normally opted for the one with gin, but for obvious reasons we settled with a coconut milk and lime leave infusion. I was quite surprised when Monkey said he liked it, it could have just been the heat! 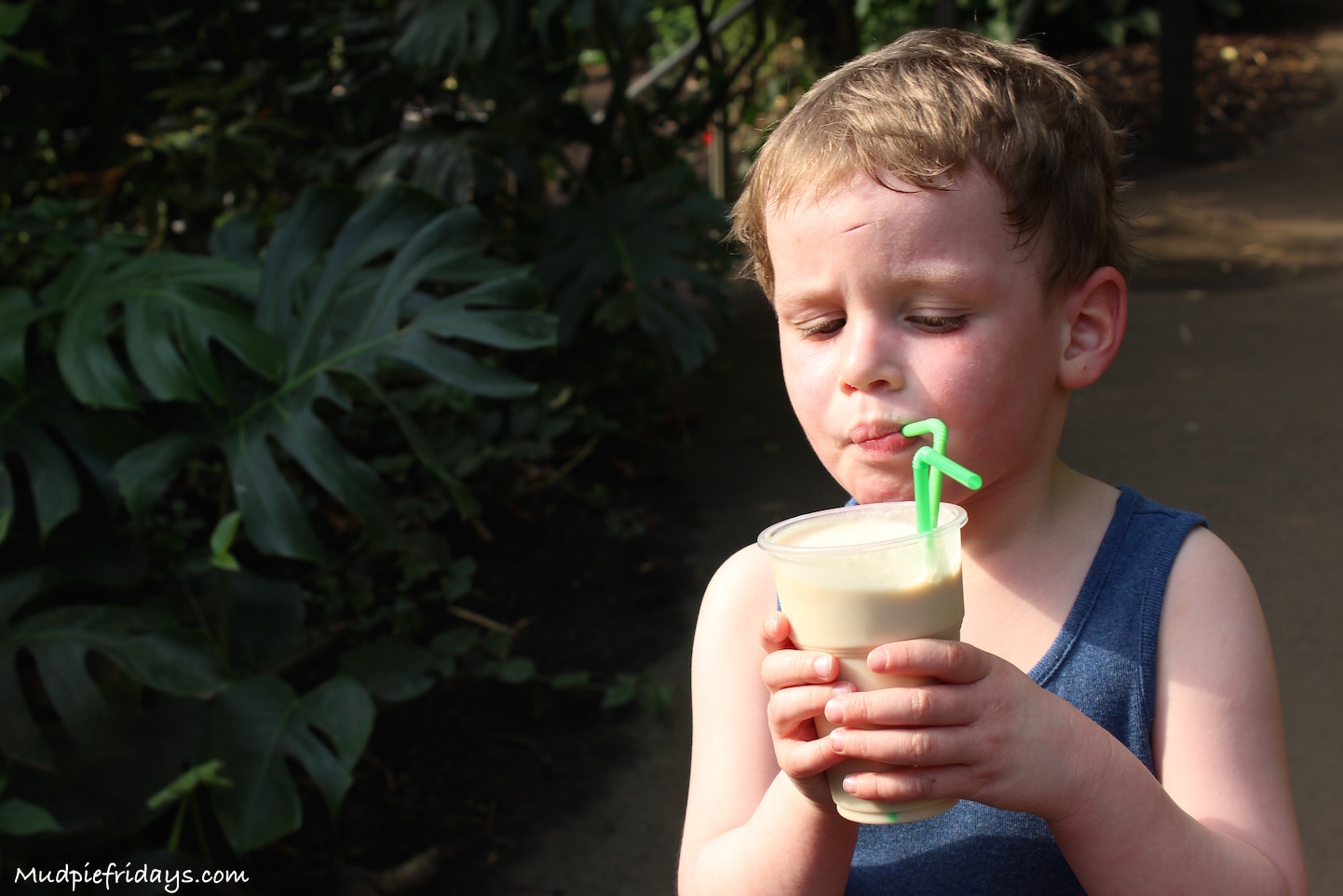 I really love the fact that Monkey learnt about how all sorts of different food stuffs grew including ginger, coca, sugar cane, pineapples, cashew nuts and spices to name a few. We probably spent 45 minutes to an hour in the Biome, I could imagine with older children you could easily spend a lot longer.

We decided to stop for lunch before heading into the Mediterranean Biome. There is a large restaurant serving hot meals made on site. Outside is a pasty shop which also serves sandwiches. For children they have a a good selection of lunch items to put in a little bag, and to Hubby’s delight they also sell beer.

The Mediterranean Biome is much more me temperature wise, its very pleasant and you are instantly transported to a Greek Island. It looks as though they are in the process of putting a new restaurant in (below) which we have decided to eat in next time we visit. 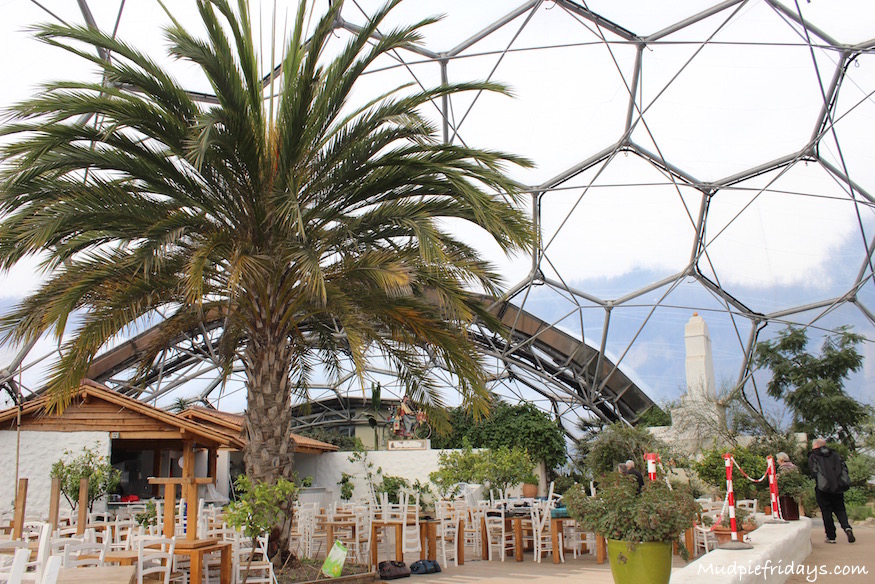 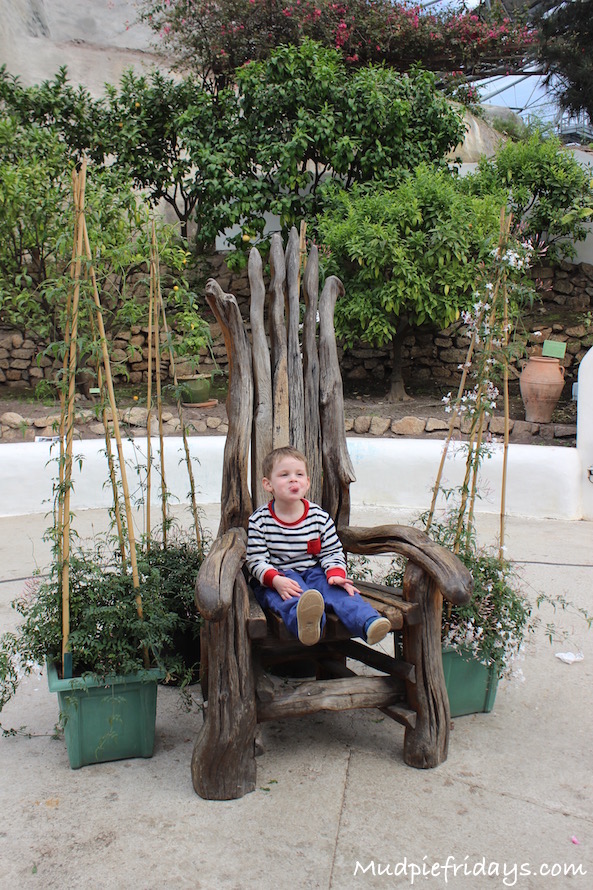 They have a lot of tulips in the Biome at the moment which gave me chance to practice my photography while Monkey had fun exploring the citrus trees and balancing on the white walls which run round the flower beds.

After exploring we headed back outside to investigate some more and visit the Core. This had been shut last time we visited so we were unsure what we were going to see. On route we found another play area with willow tunnels and musical instruments.

The core is the sites interactive learning zone, in the middle of the first room there is a giant nut cracker which Monkey was fascinated with. He could just about manage to turn the handles but Hubby stepped in when he got tired. There are various other displays and a large magnetic wall made out of old white goods. In the centre is a the seed. There is also a soft play which Monkey made a bee line for. 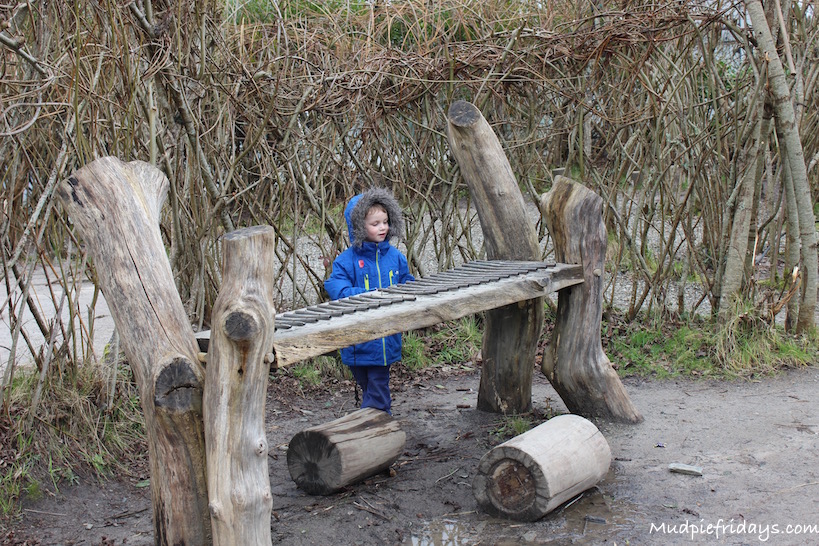 Its a great size and has lots of equipment and seating, initially Monkey decided to make a tower before putting on a bug outfit. Although it took a lot of persuasion to get a photo! It was a great opportunity to take the weight off our feet before the drive back to our holiday home, especially as it had started to rain outside.

We had a great day at the Eden Project, and we did not see all that it had to offer in the five hours we were there so we will have to visit again! It definitely lived up to expectations and is a great place for children of all ages, I would highly recommend a visit if you are local.

We were given tickets to the Eden Project for free for the purpose of this review all opinions are my own – we loved it!

If you have enjoyed this post then this is a bit of a shameless plug, I have been nominated for the MADs under craft and pre-school and would really appreciate it if you could spare a few minutes to do the same but clicking on the badge below which takes you to nomination page. I honestly would be so grateful the awards close on 8th April. Thank you xx