The Lion Guard is an amazing TV series for little ones based on the classic Lion King movies. The series follows Kion, the youngest child of Simba, as he follows in his dad’s footsteps and protects the beautiful Pride Lands. We were very lucky to be asked to review some of the new toys from the series before they launch on the 2nd of July. 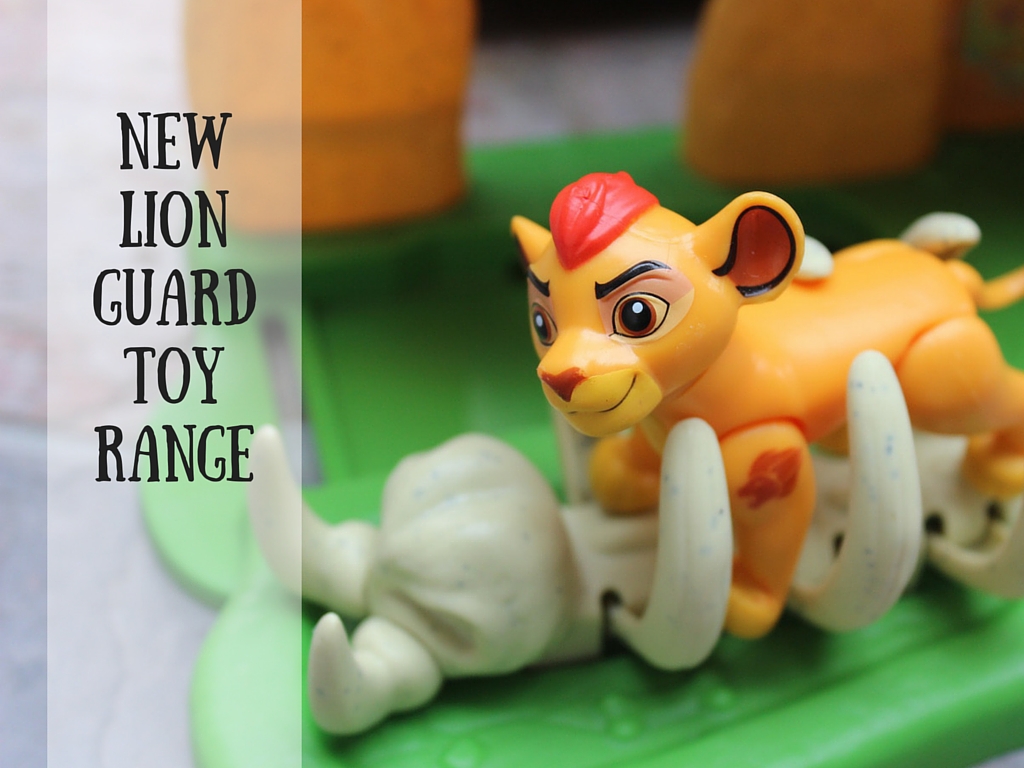 Lion Guard a great cartoon and we have it on record so that Monkey never misses an episode. It also appears that we are not alone! I initially set out the toys for Monkey and two of his little friends to play with, the squeals of excitement when they saw the boxes was brilliant. At that point I wish I was a vlogger as well as a blogger!! However as excited as they were it made capturing photos for the review of the toys by Just Play Fair almost impossible as they were so engrossed acting out their own versions of the stories from the series. 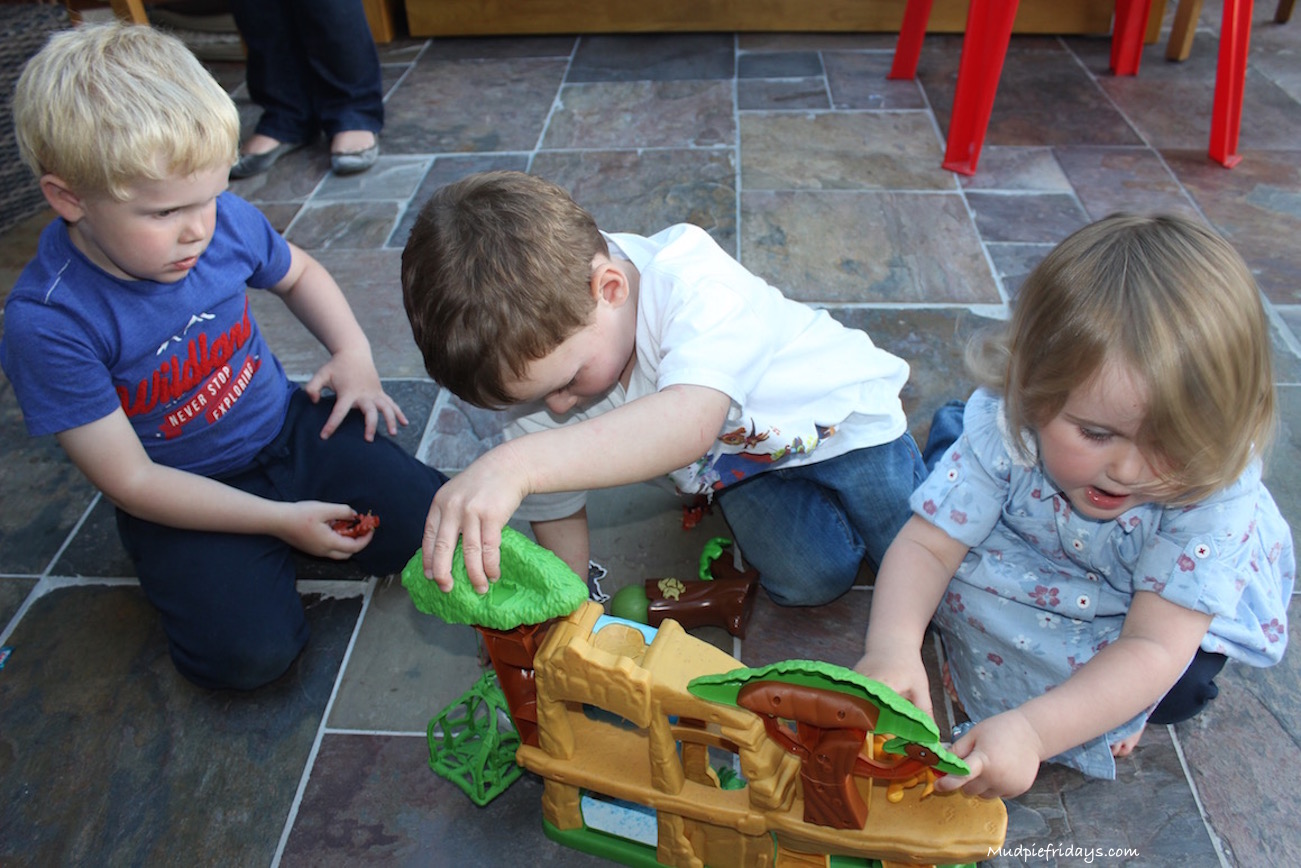 So I gave up on that idea… I need not have worried as Monkey has had the toys accessible now for a week and he keeps returning to them which means I have had other opportunities to snap away. I am also very pleased that its not one of those play sets which gets played with once because its new and then not really looked at again. 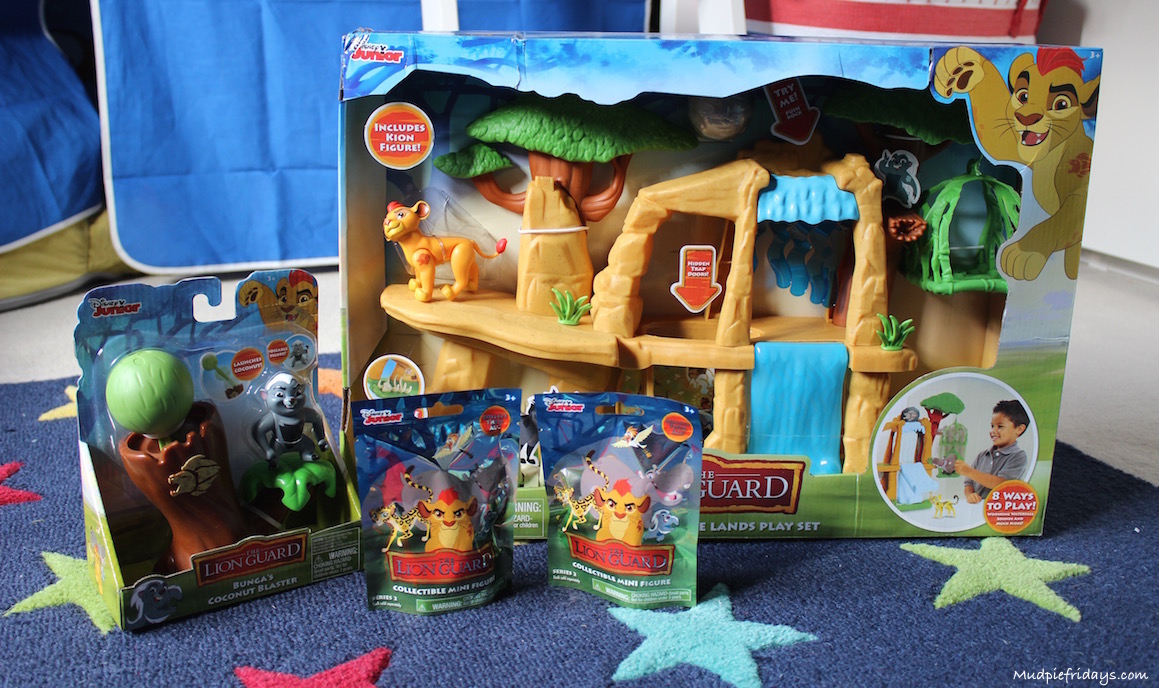 We were very lucky and received the Defend the Pride Lands play set, Bunga’s Coconut Blaster and two blind bags. I am only just learning what blind bags are! Basically incase you don’t know, each ‘blind bag’ contains one collectable mini figure and you have no idea which one you are going to get. Hence the name! They are perfect for pocket money toys with a RRP of £2.49. I can imagine the kids playing swaps with them in the playground as they try to collect the whole set. There is even a limited edition rare figurine to hunt down. Monkey went straight for the blind bags ripping into them with his teeth! I hassen to add this is not something I encourage..

We actually received two of the same character – Pumbaa, Monkey gave one of them to his little friend as she loved it so much. I suddenly felt very proud of him. They are a good size for mini figures, I can see Monkey wanting to try and collect them all.

The second toy was Bunga’s Coconut Blaster, he is one of four characters which comes with their own accessory. The other characters available include – Kion and a toppling wall and Beshte with a boulder catapult all retail at £9.99. Unsurprisingly this also became a firm favourite with the two boys. It works by pressing the leafy tree branch, which  fires the green coconut into the air. Monkey and his friend decided it was good fun to aim it at the other characters.

I must admit I am a fan of toys with action that don’t require batteries as you know they will always run out when you don’t want them to, and you won’t have any spares in the house. Unless you take the ones out of the TV remote! I was also really surprised that the Defend the Pride Lands play set didn’t require batteries either. Especially as there is a lot going on with this set which includes an exclusive Kion figure. 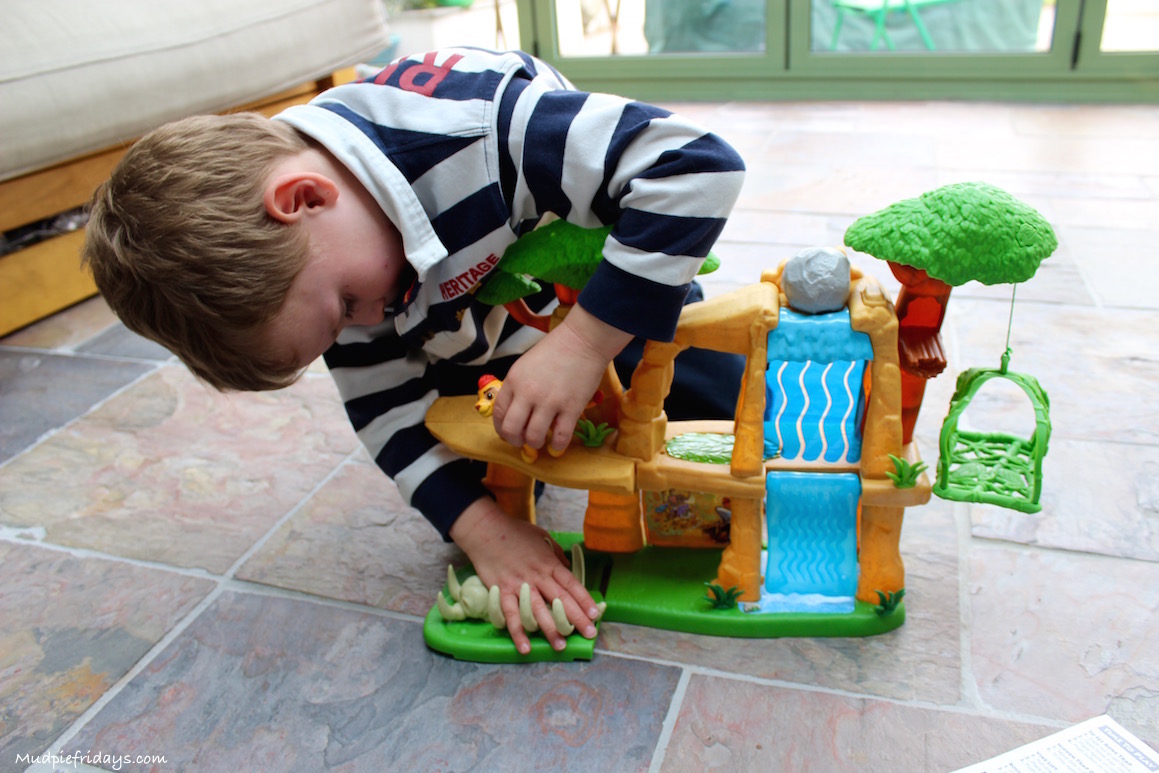 First of all you’ve got the bone trap which works by simply spreading the bones with your hand. It also pulls out a little to let whatever character you have on the ledge above fall into the trap. The ledge gives way when you press a button at the top of the tree. 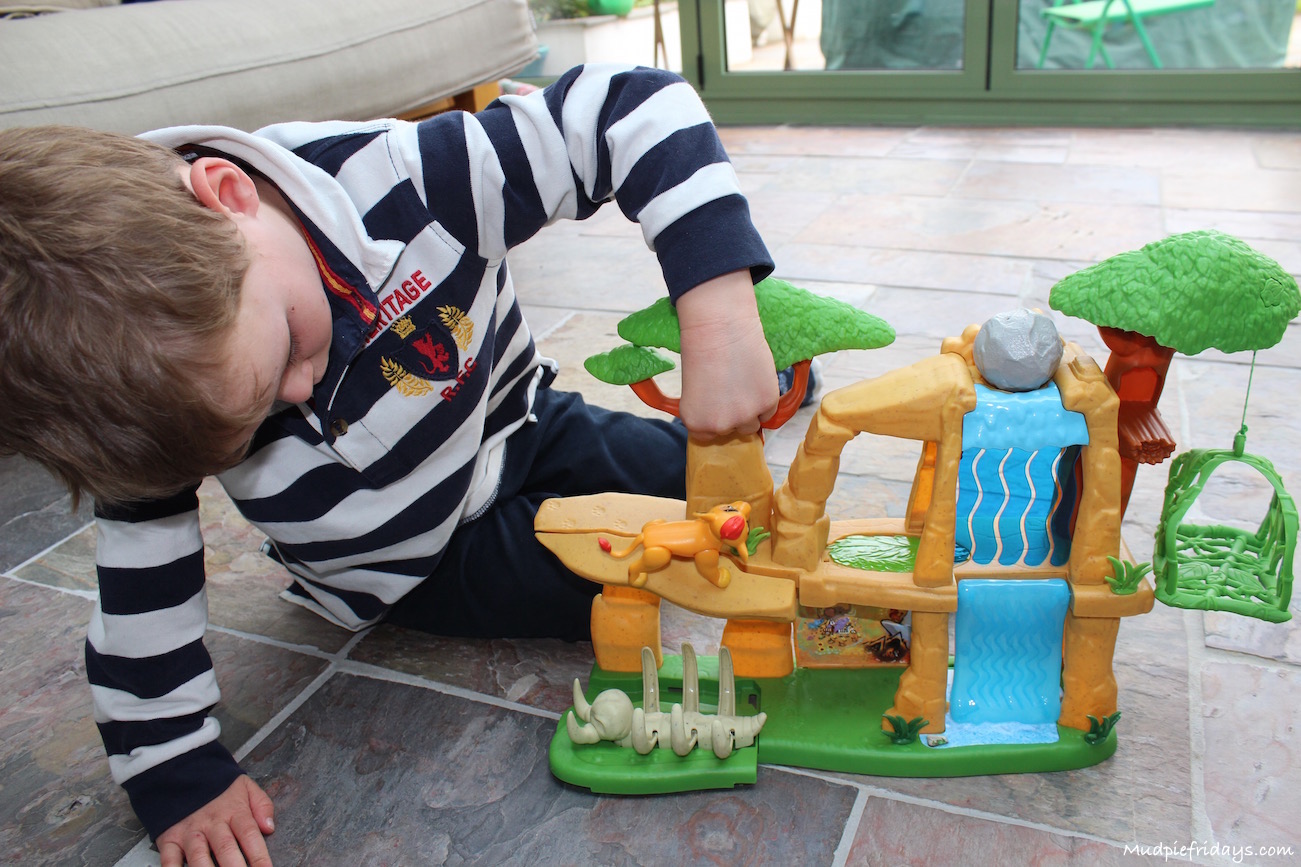 Monkey particularly liked the hidden trap door and spent a large amount of time trying out the different characters and how easily they fell through. In order to get the door to release you need to move the tree next to it. Don’t worry you get an instruction manual which will tell you how to operate all the features. Which is just as well as I think we would have missed a couple if not, the trap door being one of them. 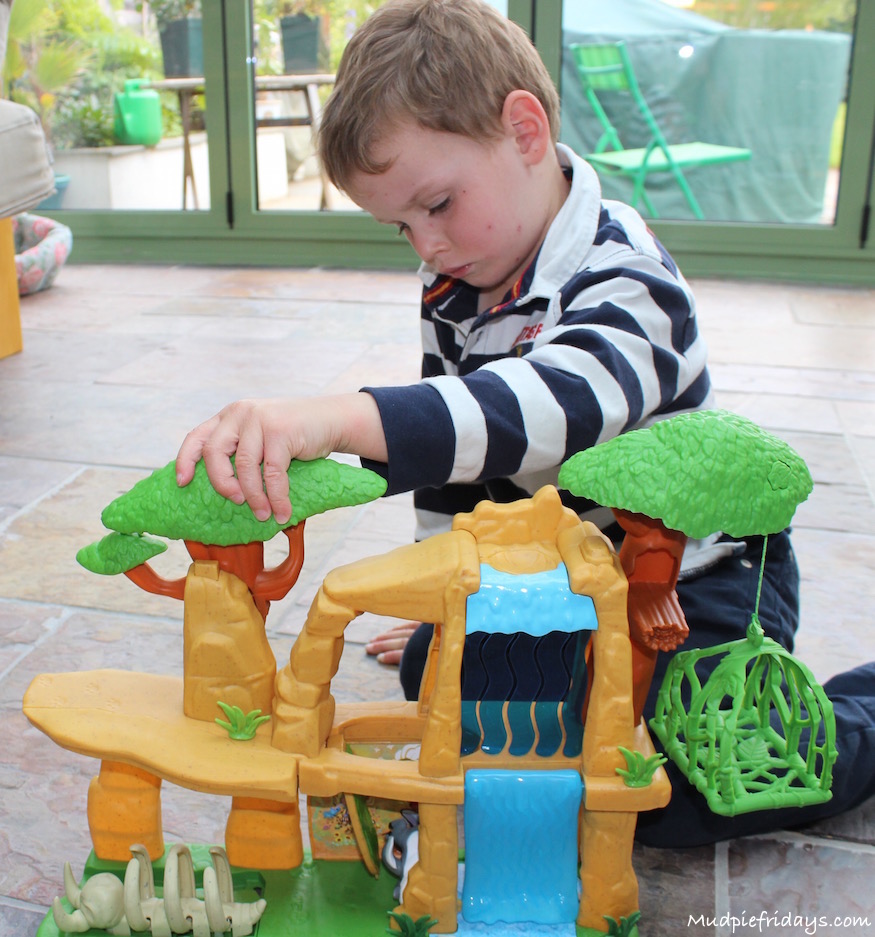 There is also a vine lift which is operated by a button on the tree that takes it up and then you pull it down by hand. The bottom part of the waterfall has little beads in it so as you swing it in and out it sounds like water, working just like a rain maker. And how can I not mention the boulder launcher? 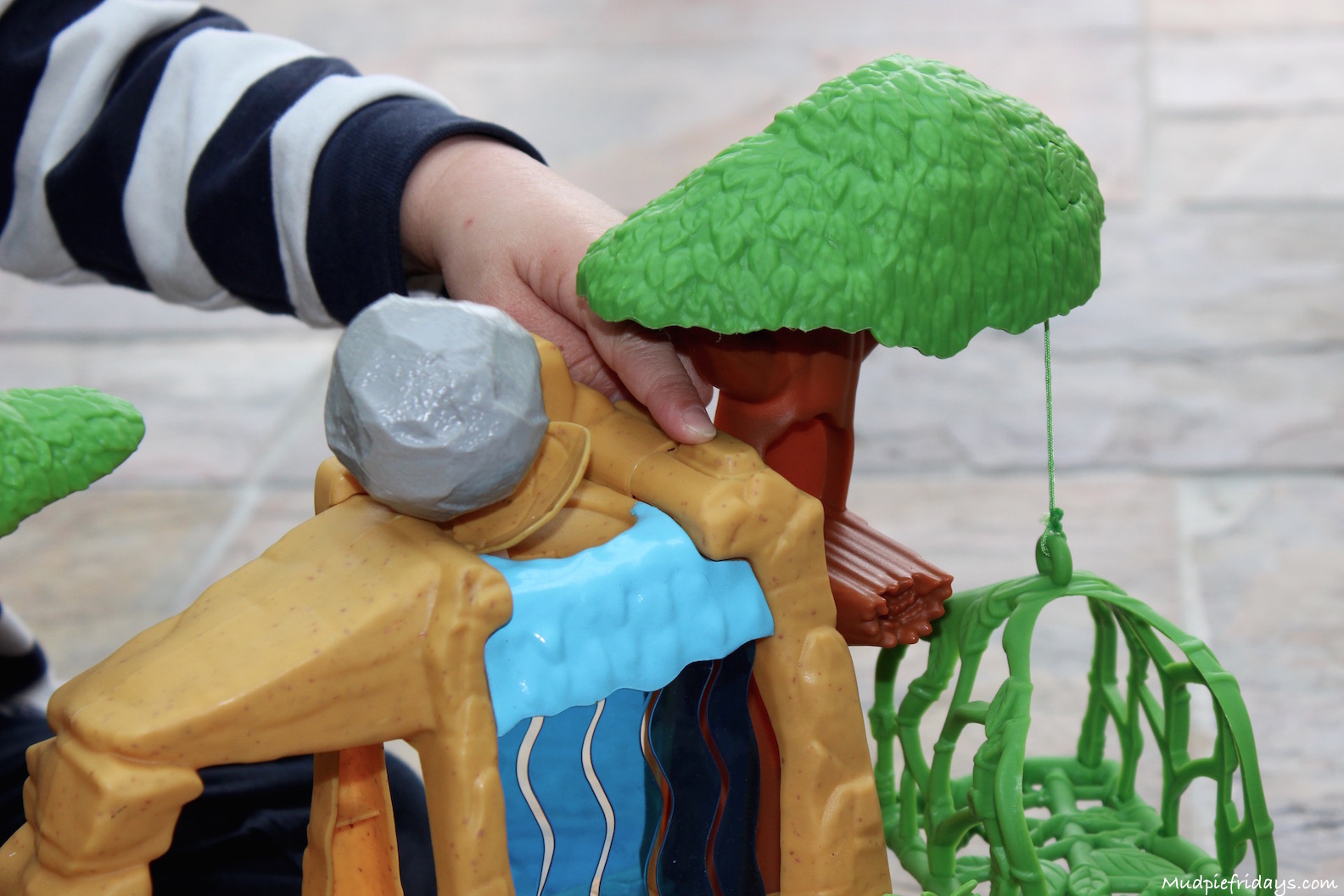 Overall there are eight features to this toy, I often think play sets like these can be a little boring. But not this one, theres lots to do and loads to build your own stories around. Its also not too big, textured and imaginative not bad for RRP £39.99. I really do like this play set as does Monkey and would recommend it to friends and family.

You can find out about the whole range of toys here.

We were given these toys for the purpose of this review, all opinions are our own.

Linking up with TriedTested