I have a thing about roses, so much so that we have planted our own little rose garden. When I heard about Mottisfont and their rose garden I thought it would be lovely to visit although its a bit of a way from us, around two hours by car. For one reason or another we didn’t actually end up visiting until far to late into the season for the roses – maybe something to do with having a new baby? As they don’t dead head their roses it meant many of them were past their best towards the end of July. However we will be visiting again next year in June as they recommend on their website as its simply lovely and as soon as I walked through the new entrance I felt a pang of guilt that Monkey wasn’t with us. We arrived around 11am and the carpark was already a struggle and its  big carpark! By the time we left there were cars abandoned all over the place! We got lucky and managed to find one in the shade. They have obviously undergone some building work and had a lovely new wooden entrance with a shop and toilets. Part of the pang of guilt was done to the fact that they were running a 150th Anniversary Beatrix Potter Trail with all sorts of games and activities. I love Beatrix Potter and couldn’t resist a nose around the shop while my mum renewed her membership. I refrained, unfortunately I was not so well behaved in the plant shop taking home a white thistle, Verbena and Japanese Anemone… oops.

If you have not visited before,  the main path takes you up to the House and its large sweeping lawn. You pass over a river that runs down the side of the property and we saw some huge trout, mainly brown trout although one had a vivid pink under belly. All the kids were fascinated watching them move around in the fast current hoping to catch a meal. There were also a couple of swans. The fact that it had taken us two hours to drive there and that Kipper was still very young only 7 weeks we headed straight to get a coffee and have a feed. We initially went to the Old Kitchen which is to the right side of the house, they had some lovely tables and chairs outside right next to the river with weeping willows. It was perfect apart from they didn’t start doing food until midday and they had very few sandwiches. We didn’t see the point of stopping again so walked around the front of the house to the Coach House Cafe which had a better selection. Based in the adjoining stable block there is plenty of outside seating in both the sun and shade. There is also an ice cream shop in the same block, but be warned on a hot Summer’s day it gets very busy!

After we were all fed and watered we headed to the walled rose garden. I am sorry to say we were disappointed!! Although this really was only because we miss timed it. As you walk through the hedging you come across an open court yard area with another little coffee place and seating. As well as some raised planters. We could see a few of the remaining roses but it was not the spectacular display I was hoping for. Not to be deterred we walked through into the walled element and there were some gorgeous beds of herbaceous perennials organised in such a way that you could walk between them. The area is essentially divided into four lawns surrounded by borders on all sides, with a more traditional rose garden at the end. I really liked that there was plenty of seating – important when you have a baby in tow that may decide he wants feeding at a drop of a hat. 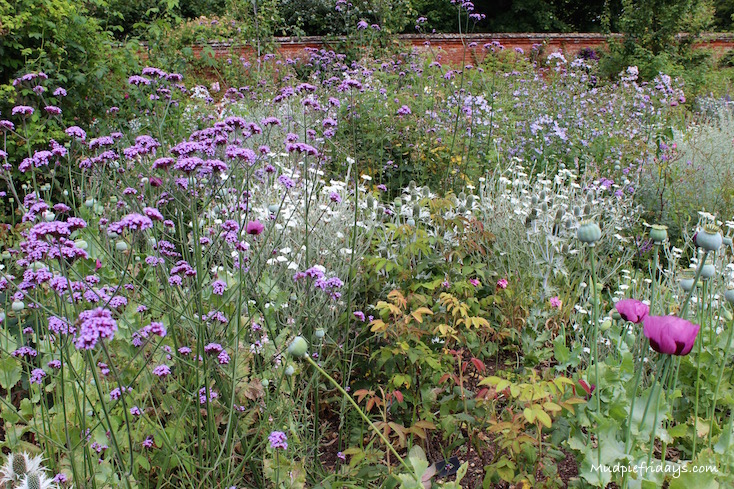 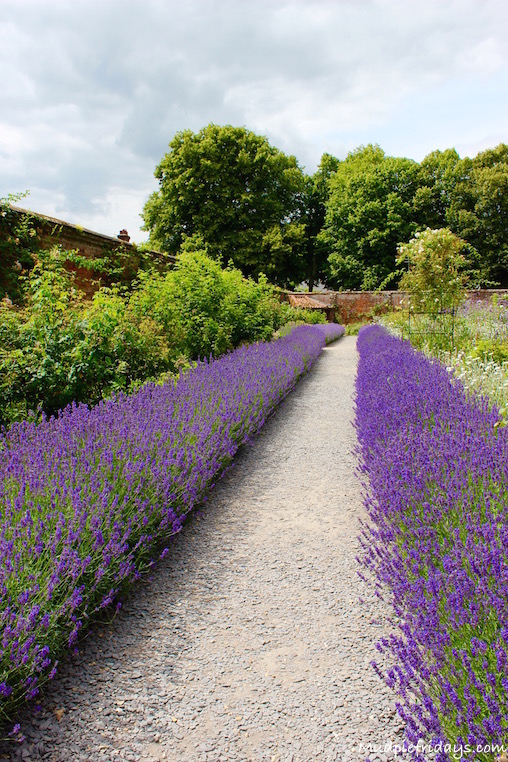 One thing I would say is that we could really tell the difference in the temperature inside and outside the walled garden area. Initially we walked through and went and sat in the shade for a little while to try and keep Kipper comfortable. Thankfully it clouded over and we were able to have a better look. It was a haven for wildlife and we saw the lovely purple poppies. I also really liked the lavender and it reminded me that I must take Monkey to the Mayfield Lavender Farm. You can see that despite the roses being past their best there were still some lovely flowers to look at. And we did see the odd rose and I am sure there is a reason why they don’t dead head but I have never known that in any of the other National Trust properties I have visited.

The grounds are huge, you could easily spend a whole day walking around them, we didn’t as we had the pram and also didn’t want to hit rush hour on the way home. It does mean that there are loads of trees so plenty of shade to set up base camp for a picnic with friends and kids. In fact we used the shade a couple of times to let Kipper have a kick around. Unfortunately we didn’t have time to have a look around the house, and because Monkey wasn’t with us we didn’t make it to the play area either although it did sound great on the map ‘wild climbing an water play features‘. So there is definitely more to see and the fact that they also have a Winter Garden I can see us returning at some point. Although I think I will wait until they have another event on, as two hours is quite a long time for Monkey to be in the car. I will also be returning in June to see the roses in full bloom.