When we were offered a Furby to review by the lovely people at Hasbro I was secretly very excited. You see I was a little too old to have had one when they were popular in the 90s. Despite the fact that deep down I would have quite liked one. I wasn’t sure if Monkey would be taken with it or not, something in the back of my head made me worry that it maybe a huge flop. After all can the must have Christmas toy of 1998 be remodelled for todays kids? 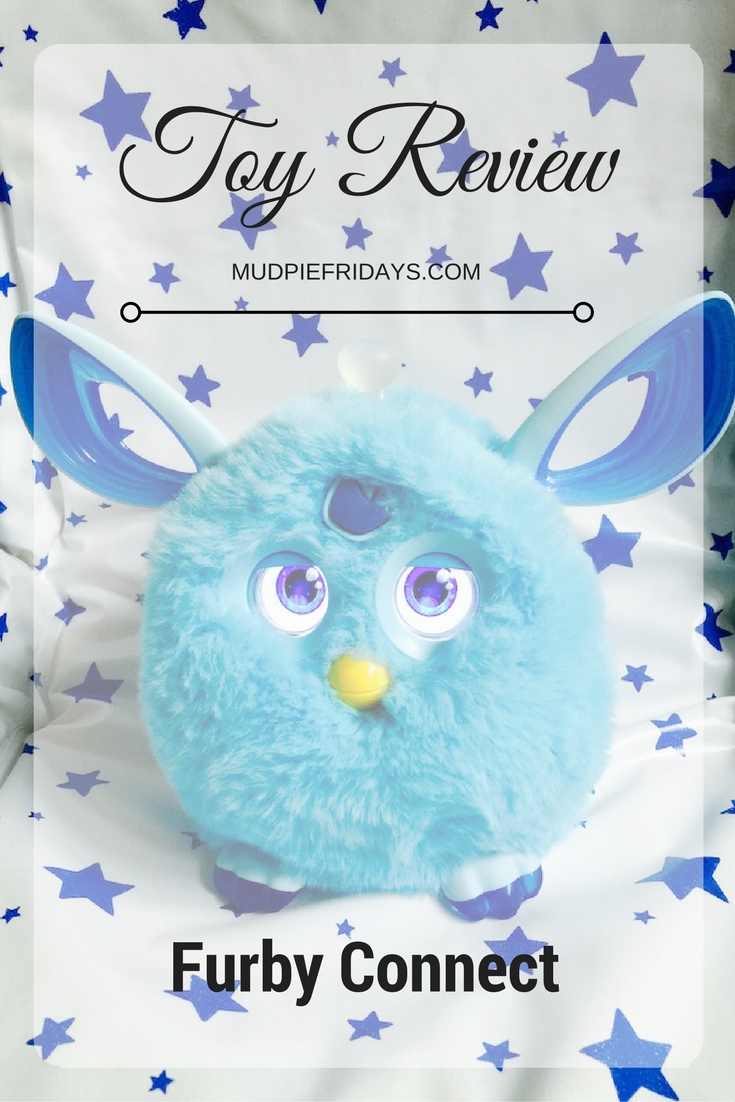 I need not have doubted the toy makers genius. As soon as he saw the box he was excited and once out and fired up he quickly learnt if you pulled its tail it farted! Needless to say after fits of giggles it has become his new best friend! I must admit there is something rather endearing to the blue ball of fluff which is very, very soft. I think it must be the eyes which are LCD screens and have 150 different animations! So far we have seen various eye movements such as opening and closing, blinking, going crooked….as well as graphics such as hearts, rainbows and music notes. It really is fascinating and I can see why children are drawn to them. 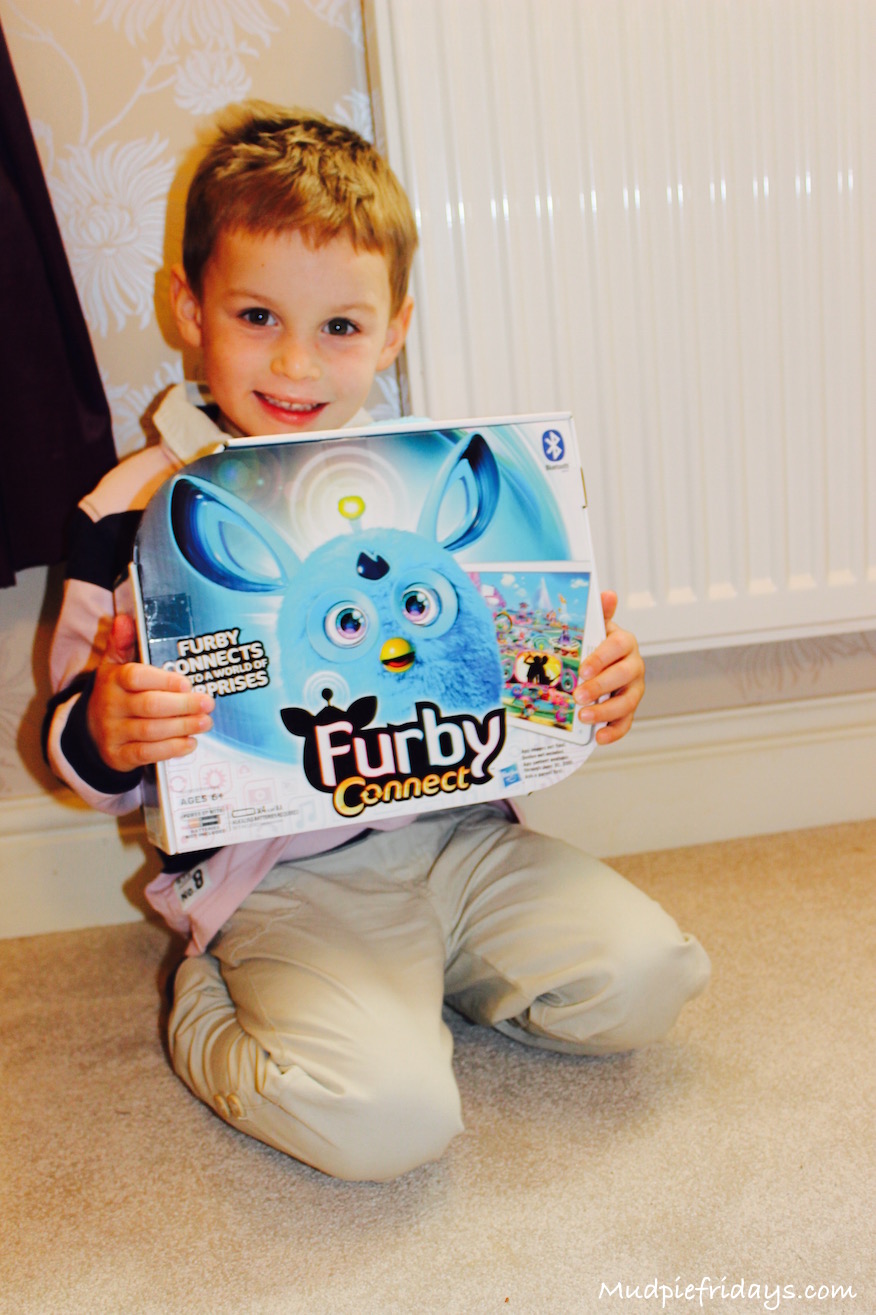 Before we go into its features and how much Monkey loves it, and he really does, Furby has slept with him every night since we received it. Lets get the elephant in the room out – that annoying lack of an off button with the previous versions. I know one of my friends only put batteries in her daughters once because it use to scare her when she walked past her bedroom! You will be please to know this has now all been fixed. Furby comes with a little eye mask which when attached to Furby’s crest will make him sleep. To wake him up all you need to do is remove the mask and pull his tail or move his antenna.

I was impressed that ‘Furbish’ is actually quite easy to understand, in the instructions there are some translations such as wee-tee meaning to sing. However we have found he speaks just as much in English if not more. He’s also very ticklish, enjoys being shaken and turned upside down, he’s even been thrown in the air (and caught) a couple of times. His ears move up and down as he talks and you can move his antenna like a joystick. I am not sure if we have had the same reaction more than once yet! 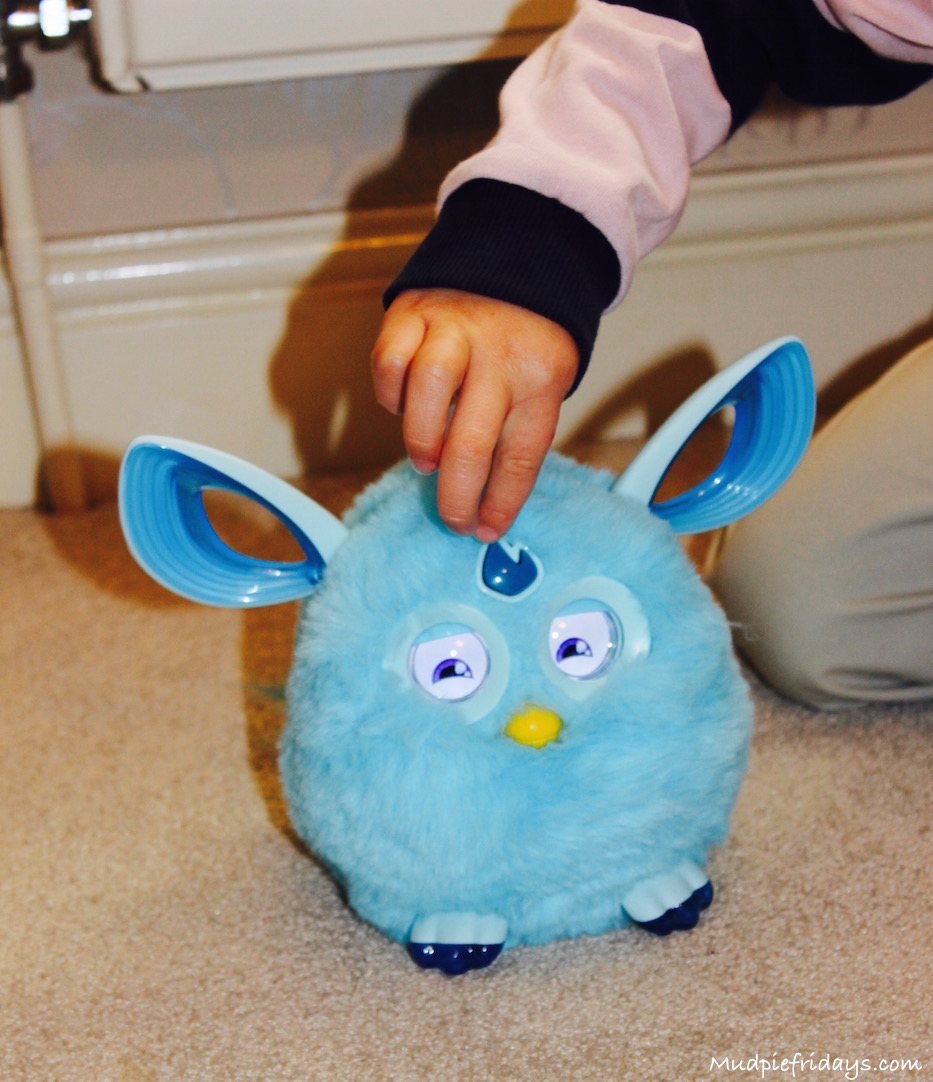 To bring Furby up to date there is a Furby Connect app, which is compatible with both Android and Apple devices. Monkey has a kindle and it worked fine. You will also be pleased to know it doesn’t take long to download. However I would probably download it prior to Christmas morning if you are considering this as a Christmas gift. 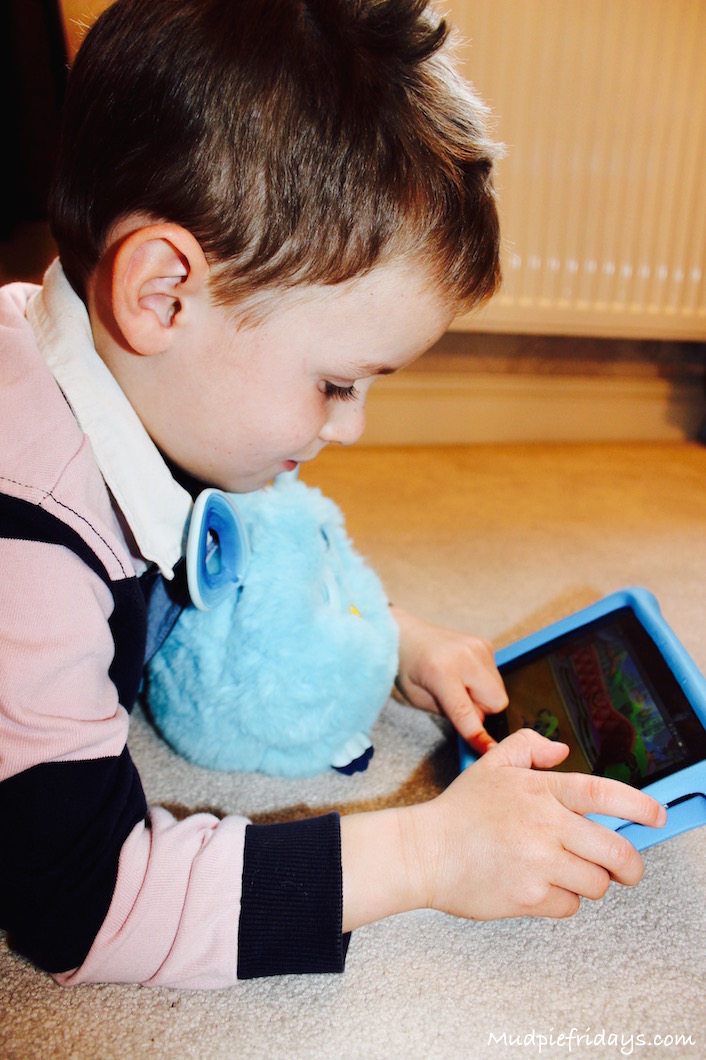 The app is the way which he is updated on a weekly basis he will learn new phases and songs by being connected. When Furby’s antenna glows blue there is something new to discover in Furby World.  Furby communicates with the app via bluetooth so you need to remember to connect it when you open the app up. Because he is bluetooth enabled he has an internal year round clock, meaning he knows when it is Christmas Day, Easter or Valentines Day. 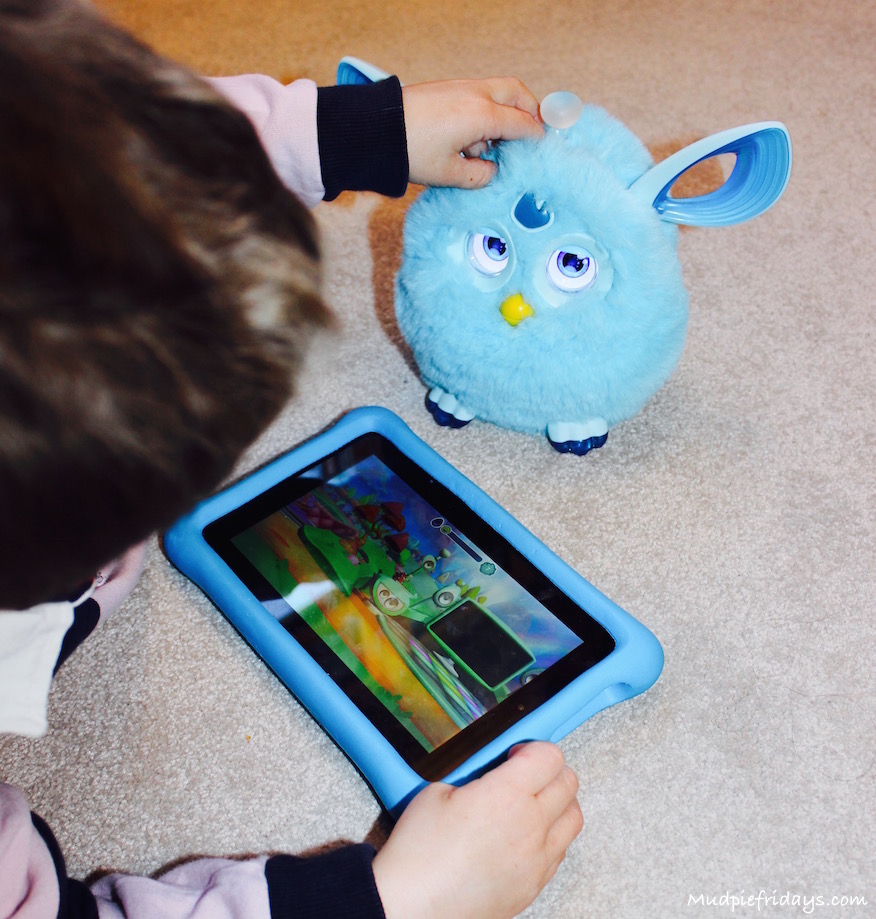 The app allows you feed your Furby and to Monkey’s amusement its also how he goes to the toilet! Yep you read right, once he’s fed he will need the loo, so you hold him over the device and he produces a poo! Also within the app you have the chance to collect food and other useful bits and bobs. After you have completed a task you are given a present. These presents will also including Egglings and fur. Meaning you can hatch your very own Furblings. Another source of excitement!! Its good that you don’t have to do too much to start to collect them, I think we have about six so far!  It holds Monkey’s interest for quite sometime. He does need me to sit with him when he plays to help him move around the app and read the instructions. However at 4.5 years old he is younger than the intended age range which is 6+. I suspect as we play it more he will get use to the graphics and tasks. 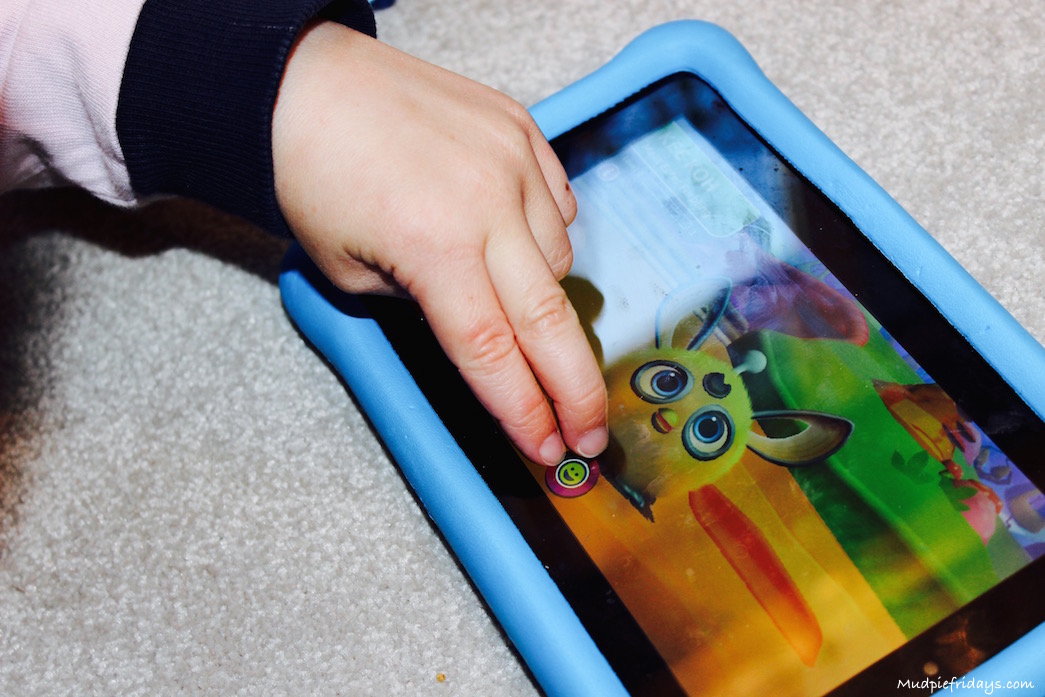 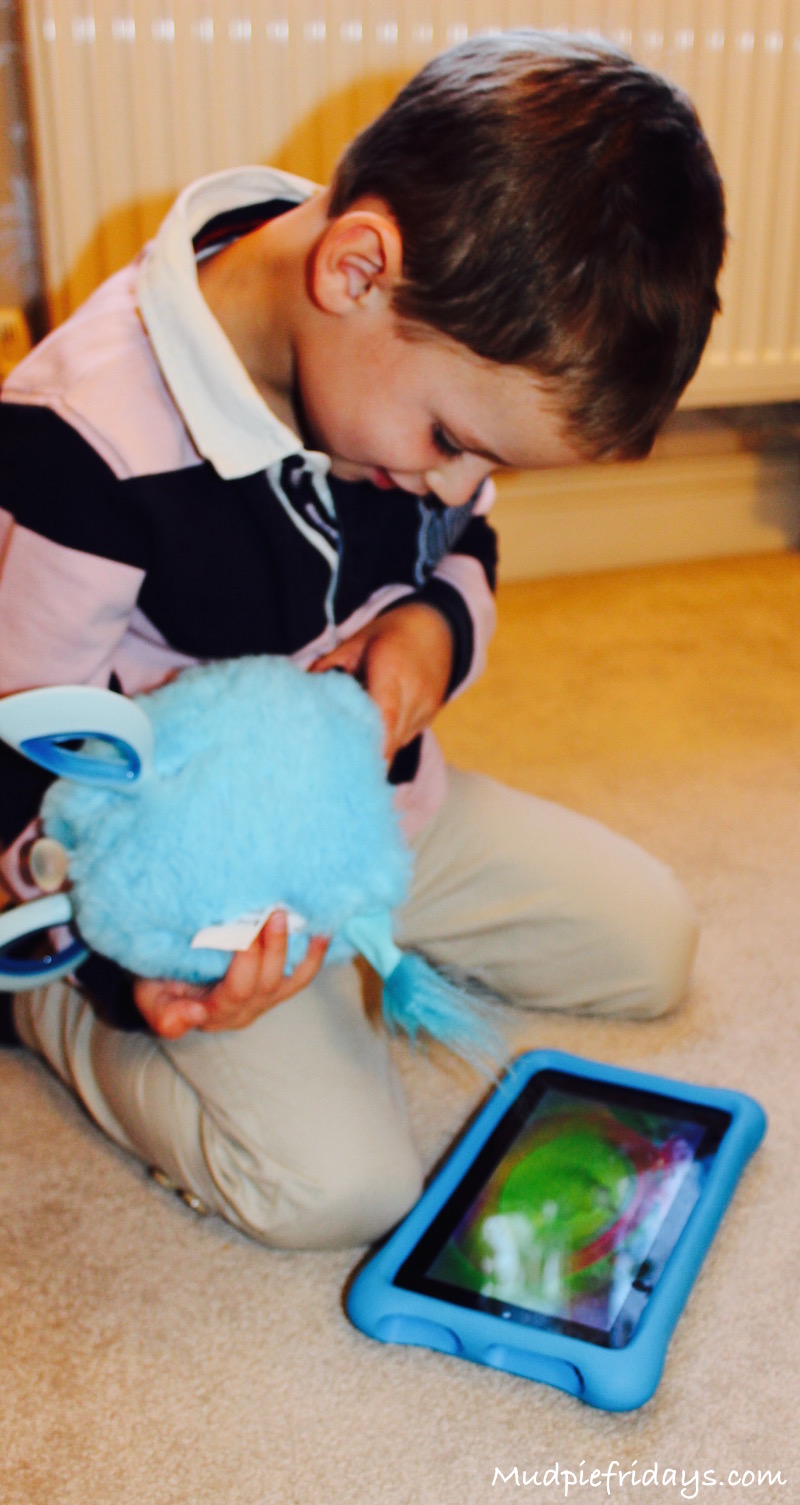 Available in pink, purple, blue and teal his RRP is £99.99, available at all good toy retailers including Amazon. You can find out more on the Hasbro website

Monkey loves his Furby and we still have a lot to discover on the app! It does say that there are in-app purchases which will enhance the game. To date we have not needed to buy anything. I can see this version of Furby being another must have toy of the Christmas season.

Did you have one as a child? I would love to know your thoughts?

We were given a Furby for the basis of this review all opinions and words are our own.

Linking up with #MarvMondays and #Triedtested 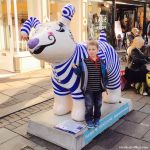 The Snowdogs of Brighton