Coombes Farm Lambing 2017: Last year we could not go lambing as I was heavily pregnant with Kipper so not only did I not feel up to it, I was told it was not safe to do. Although Monkey had been with grandparents it meant I had not taken him since we visited the Seven Sisters Sheep Centre in 2015! As it was Easter Sunday when we visited we also brought Monkey’s grandparents along.

Its funny as living in the area now for a good number of years I had no idea that there was a farm in Lancing open to the public. This is partly due to not having ever noticed the lambing signs before. To be fair Coombe Farm would not normally have been our first choice, but our local National Trust farm had already had its lambing weekends earlier on in the month. I am glad we found it as I would definitely look to go back next year. 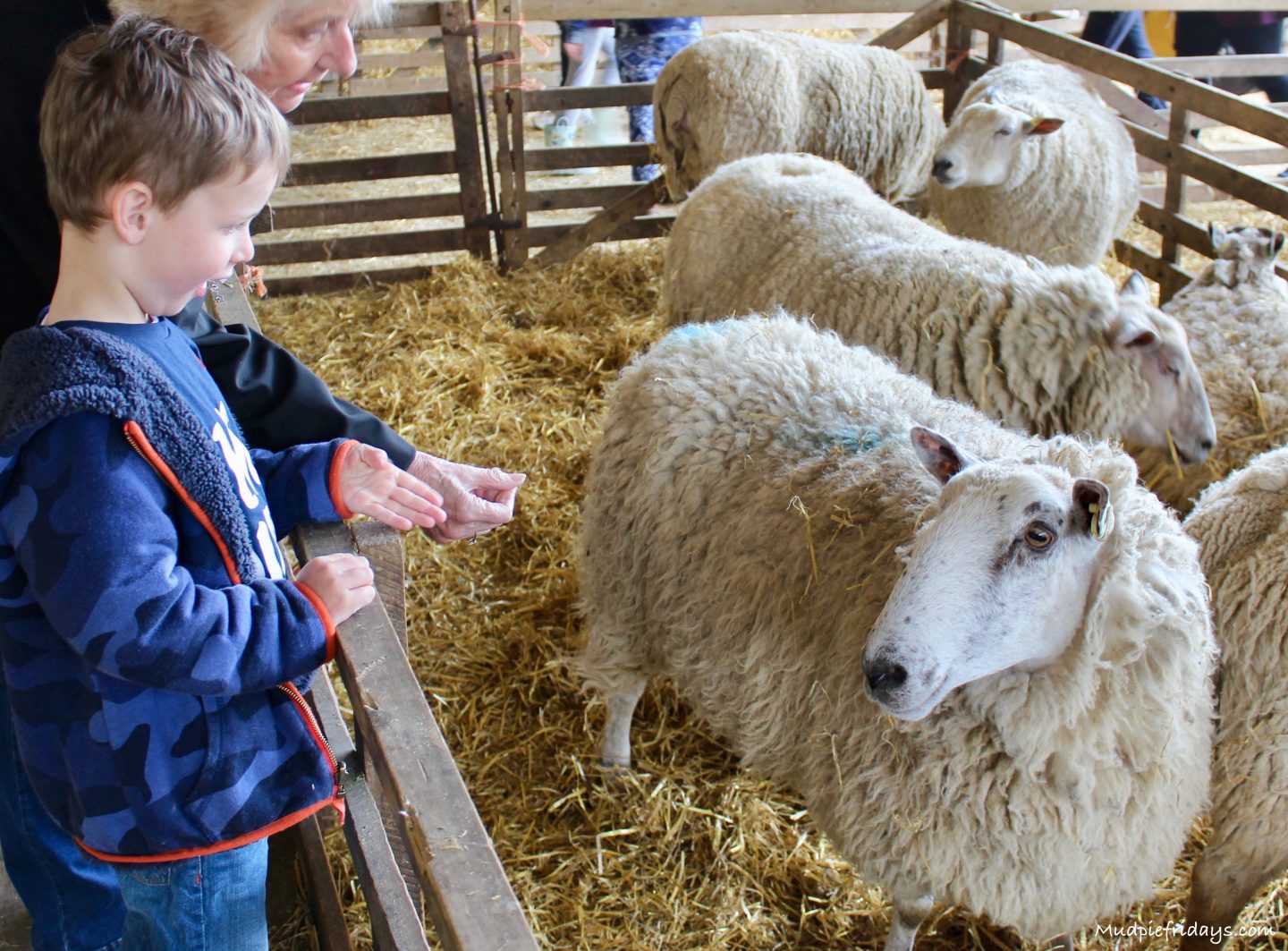 Entrance is £2 for children and £3 for adults. Kipper was free. They also have a tractor ride which lasts for a whopping thirty minutes and that is an additional £2.50 per person and recommended for ages two and above.

As you walk into the farm there is a little kiosk to pay which does only take cash so this is worth bearing in mind. As you enter the farm yard there are two large barns with lots of pens. You need to remember this is a working farm so its rough and ready. Not that we mind this, but it was mildly entertaining listening to people moaning about the smell. Saying that its not overly dirty, although the yews are lambing so you have to expect some mess! There are lamb pens at the back of the first barn which are large enough to climb into. In fact children are encouraged to do so, and although here is a sign which says do not pick up the lambs many of the kids were. Thankfully there was a farm employee on hand to help. The hay in these pens is clean and fresh, many of the kids were sitting down and the lambs being naturally inquisitive would come up and sit with them. However Monkey was in one of those moods so I had to work really hard for just one photo! 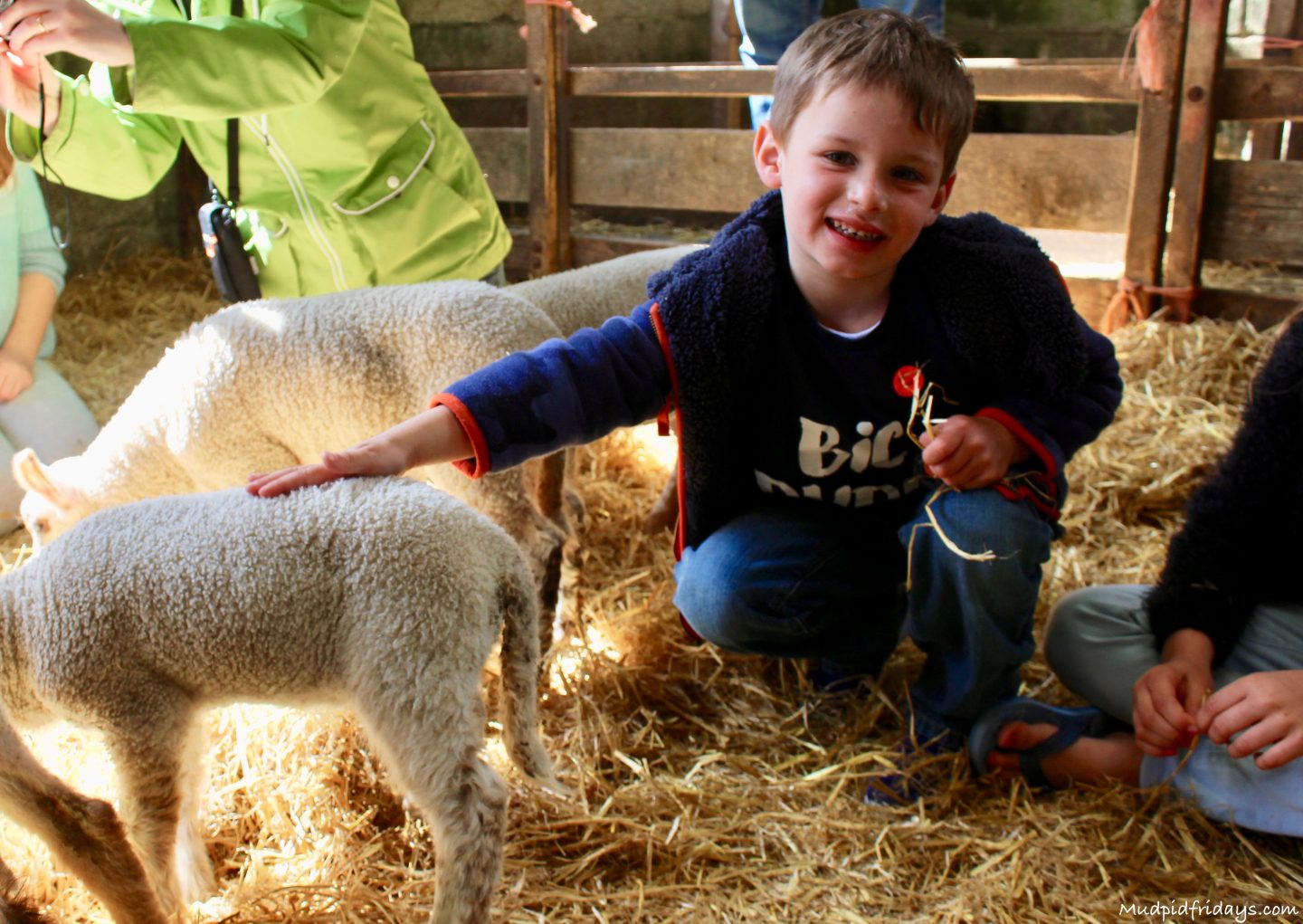 While we were there the children also had a chance to feed the lambs. Despite going on about it for the last month or so, when he actually got the option Monkey decided he didn’t want to feed them either. I may just have to face the fact that he’s starting not to want to have his photo taken so much! The lambs were pretty cute though.

After petting the lambs Monkey headed off to go on the tractor ride with his grandparents while Hubby and I went to feed Kipper in the cafe. There is plenty of seating inside should the weather be less than satisfactory, we got a cuppa from the cafe and sat down at what only resembles old school tables. The cafe is really pretty basis, only selling cakes and sandwiches but that was fine for us as all we wanted was a drink. When Monkey came back he declared he was hungry and we had a look Bens Kitchen – a mobile place outside which did burgers, baps and sausage rolls. There was a few picnic tables but since we had a rug we sat on the floor. This gave Kipper a chance to explore. Monkey enjoyed cabining a tree next to where we were sitting along with a number of other children. 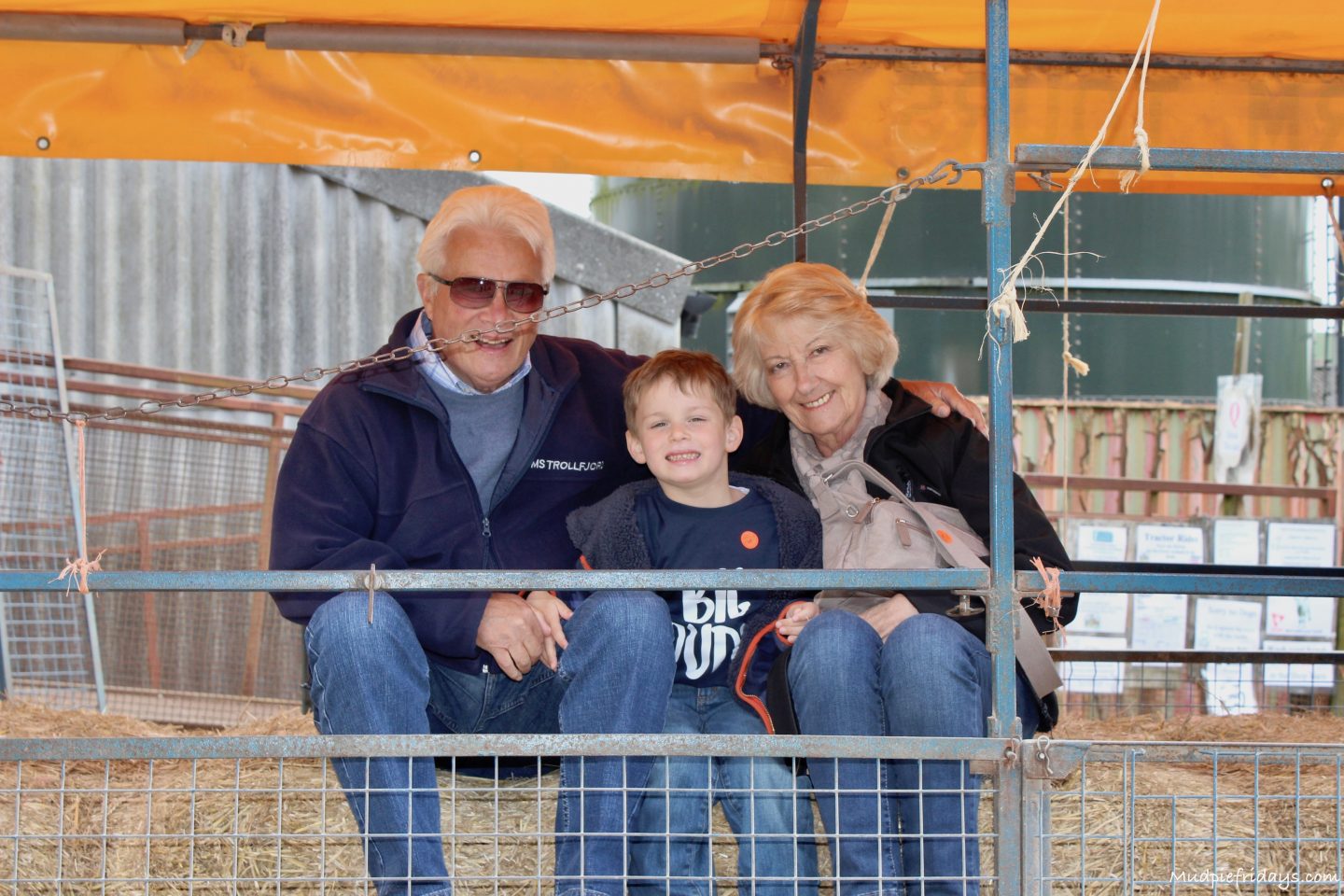 The weather started to close in so we decided to make a move, as we left in a bit of a hurry we didn’t manage to look around the old flit built church also on site. I believe it dates back to the Saxons so I have made a mental note of it, for when Monkey does school history projects. We spent a good couple of hours at Coombes Farm which is not bad considering it only cost us £14 to get in. Being a working farm I did wonder if it would be set up for a buggy but it was fine. 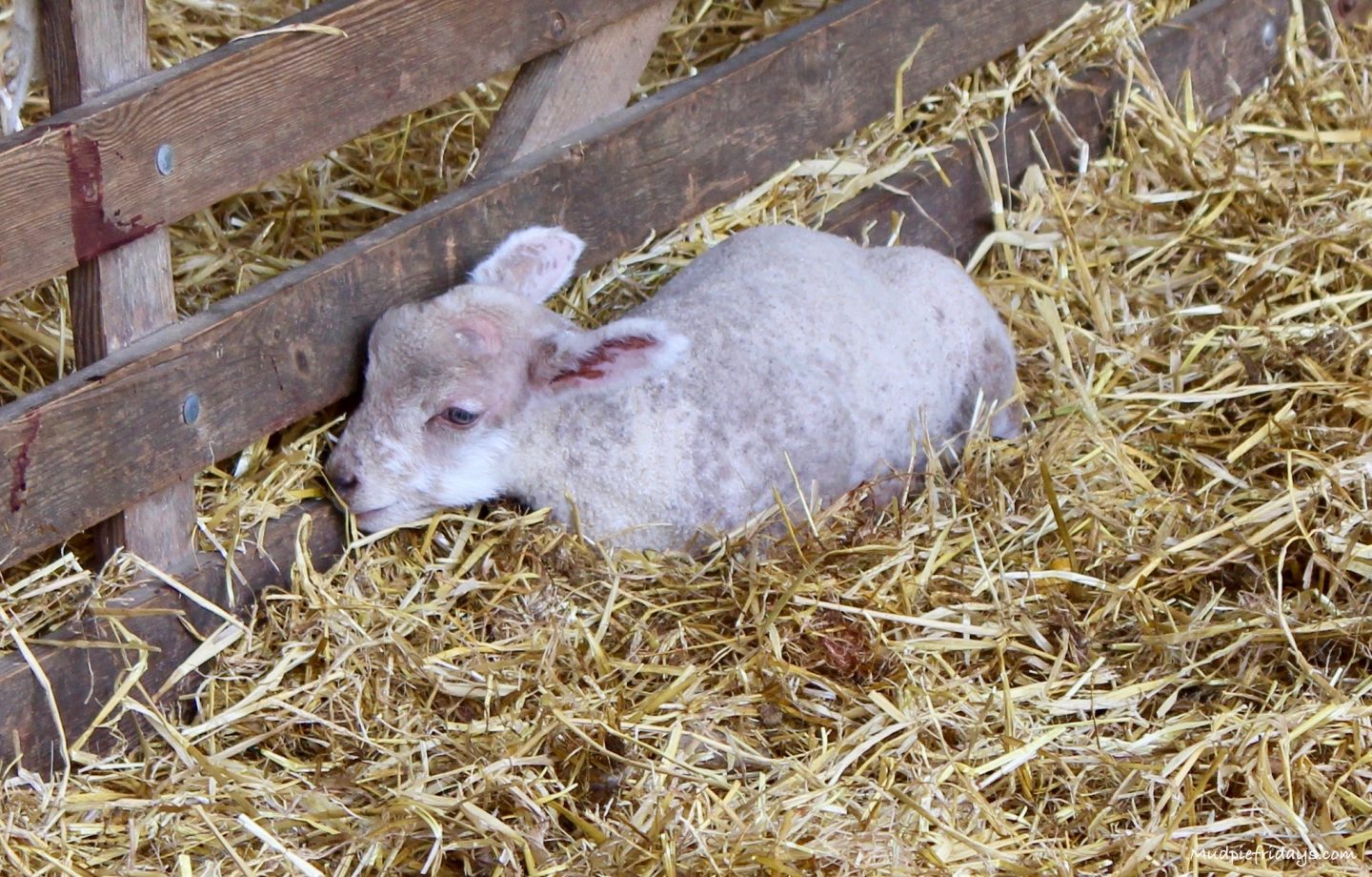 The only thing I would say is that parking is in a field adjacent to the entrance and although the grass is cut short. If it had been raining and muddy I am not sure I would have got my car out, as its pretty hilly. Saying that the farm runs events throughout the year so I expect we will be back to visit. You can find out more on the Coombes Farm Website. The farm is open this year for lambing up to the 23rd April, so you still have a week left to visit.

Have you been to a farm recently for lambing? What did you think? Have you any recommendations? Please let me know in the comments below. 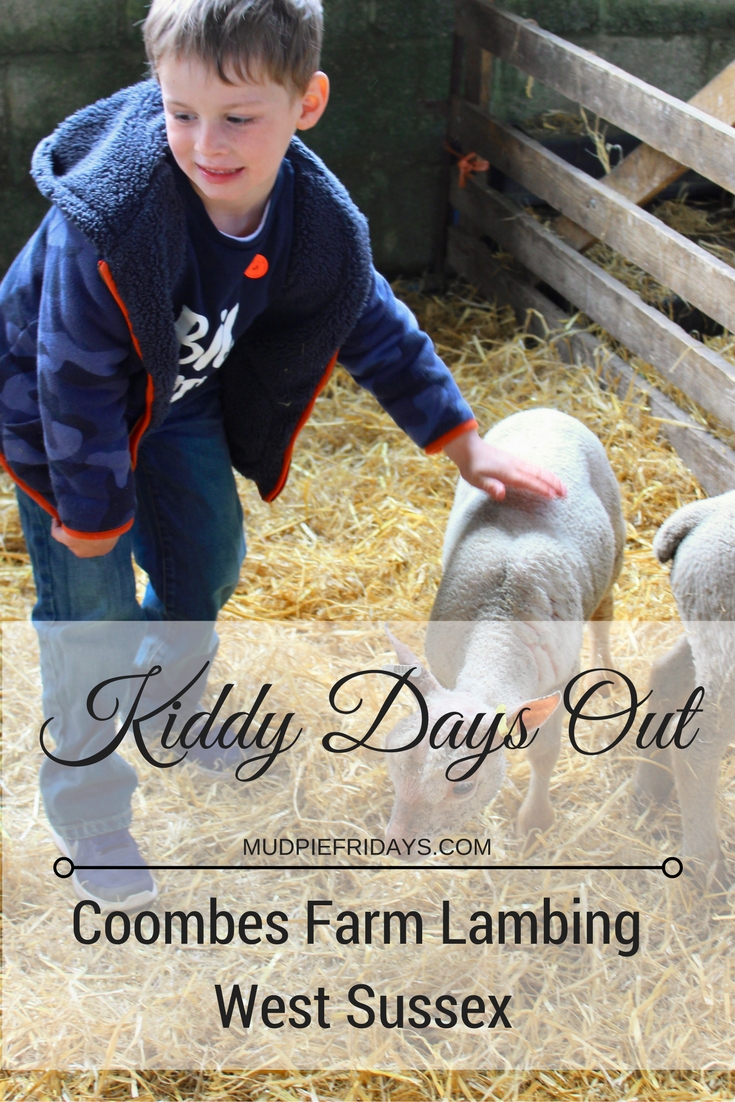 How to foster a love of reading