Baby’s twelve month update: My youngest has turned one! Its strange to think that little over a year a go I was getting ready to have him. Looking forward to a long hot Summer with them both, blissfully unaware of the juggling act that lay in wait. Not that I would change it. Kipper’s Birthday was a very different affair to Monkey’s, much more laid back and relaxed. It was a lot kinder on me too. I will be writing about the Peter Rabbit theme shortly. 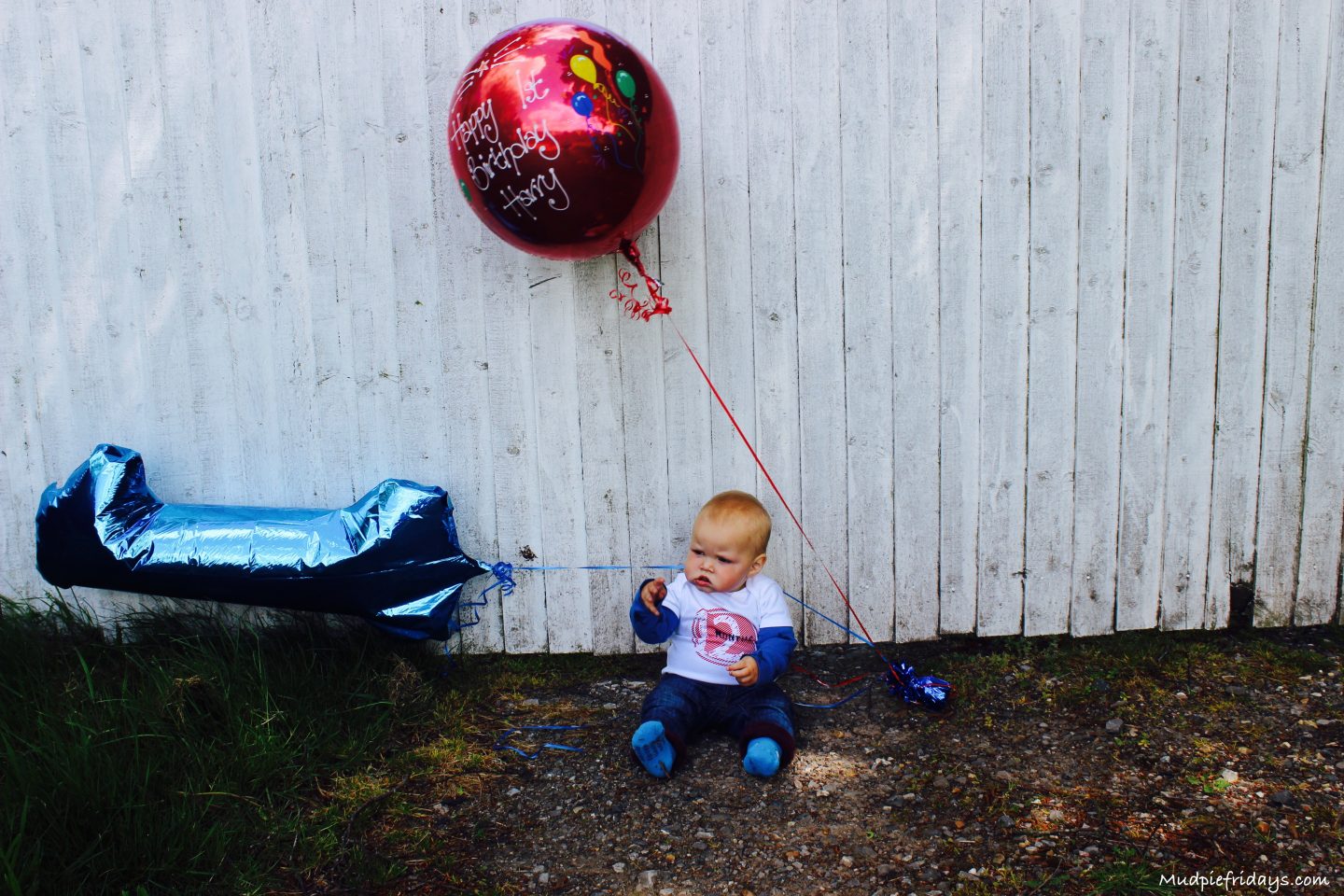 Clothing Size – some 12-18 some 18-24 months! Its the shoulders he is so broad that some things we need to size up on. I was right though because the bits in the loft are very Autumnal and with our trip to France I have enjoyed buying a few new things. Kipper has been going to nursery in baby grows. They are cute, easy to manage and wash, no lost socks and since he will be my last I like to make the most of them. I may have had to get some new ones just because….But since he is now one I have decided that he’s probably too old now for baby grows during the day. Much to the disgust of the girls in the nursery who were quite upset when he turned up in a vest and trousers. We lost three pairs of socks that day. Which is enough to make me reconsider the baby grow situation…

Teeth – We have two top and two bottom plus a half! His top right incisor is starting to cut, although I think its been a bit painful for him. There are no signs of any of the others. He definitely doesn’t seem to be so bad dribble wise as Monkey did we have hardly had to use our bibs.

Health – We have had our second paediatrician appointment and he has prescribed two different types of inhalers. One which he has four puffs four times a day and one which is two puffs twice a day. Which feels like a lot and sometime he protests, although we have started to get into a routine which makes it easier. We have also discovered a way for him to get his morning pill with0ut needing to dissolve it. We pop it in his mouth after breakfast followed directly by his beaker so he doesn’t have time to think about it or to try and chew it. It seems to be working quite well. We will have to go back to see the paediatrician in the Autumn time to see if he has improved. If he hasn’t then he mentioned we may need some x-rays to make sure everything is okay.

Loves – Making his chalkboard picture for his Birthday I realised I had never played chase the baby with Kipper. I am not sure why and now feel very guilty, especially as he thinks its hilarious. He’s really quick at crawling, much quicker than Monkey ever was so he likes to wait until you leave the lounge door open and then he’s off…up the stairs. He loves climbing the stairs probably because he knows he’s not allowed to do it. Kipper also has a draw and cupboard obsession whcih Monkey never had either. I can see me needing to buy some locks just for my own sanity.

For his Birthday we brought Kipper a swing to attach to the climbing frame and he loves it of course most of all when Monkey pushes him. Also now he’s a bit older and robust the boys go down the slide together which seems to amplify the fun! 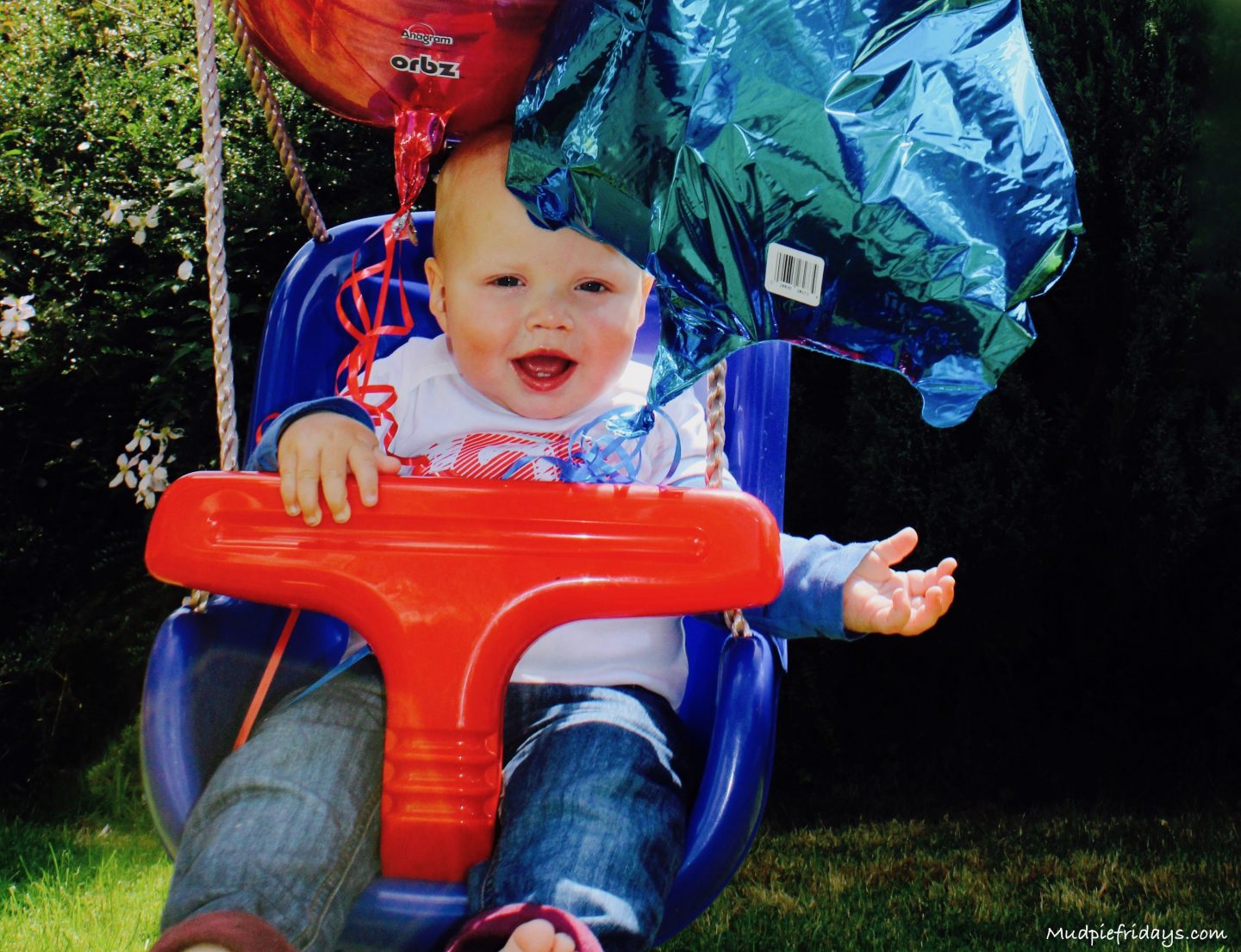 Hates – It when either I or Hubby leave the room, even if there other one is still in the room, if you don’t scoop him up straight away then there is a mini melt down before you know it. If you get him to do something he’s not wanting to do he throws a tantrum… like sitting in the high chair, putting shoes on, going to bed…

Habits – Naptime in the day is still a bit of a hit and miss affair. But his two most noticeable new habits are wanting to hold a milk bottle as he drops off. If he falls asleep with his 7pm bottle he will quite often fall asleep holding it. Even though its empty. Initially I use to try to take it off of him but that was normally met with tears and then it would take me ages to get him to drop off again. So I have taken to letting him fall asleep with it now. The other is that he likes to shake his head when he doesn’t agree with you!

Kipper also has a couple of new games which he likes to play, the first is taking his dummy out of his mouth and offering it to you. You have to say ta. Then he says ta and holds out his hand to get it back. The other is when you turn him upside down and then bring him up to your chest. He loves it and makes the same sound as you do with a massive smile on his face. 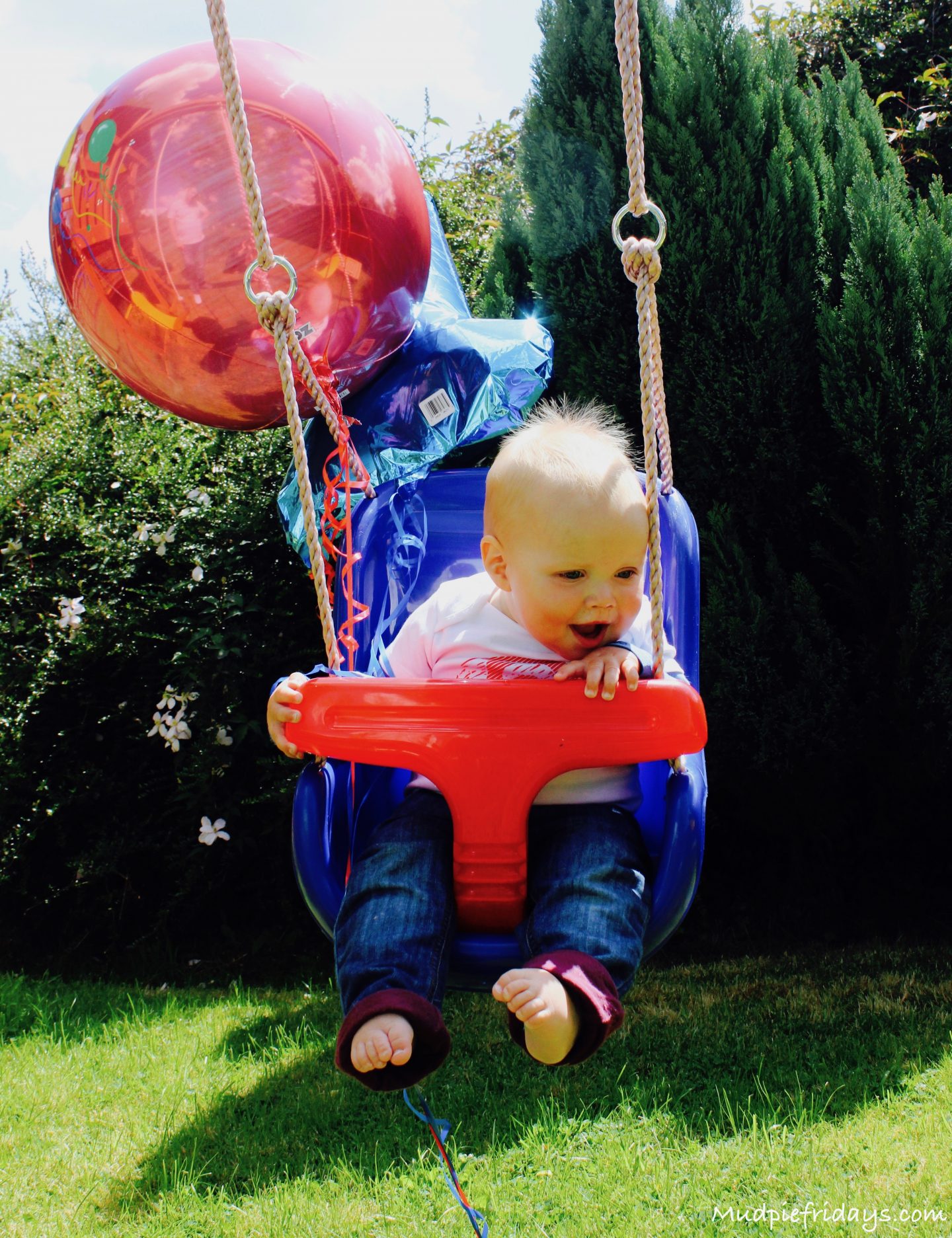 Milestones & Firsts – Kipper walked two steps on his Birthday. But he’s not really taken to it like Monkey and although he is very apt at walking around a room by hanging onto various pieces of furniture or walls. He still prefers to crawl everywhere. Although he will now walk holding your hands, but it has to be both hands.

Of course he has had his first birthday now which has probably got to be the biggest milestone, we also had a little party with his NCT friends. This month Kipper played in the sand at St Ives, which is he first time he has really been able to explore a non pebble beach. He’s also been out for his first Thai – he loved the spicy prawn crackers!

Development – His personality is coming on in leaps and bounds and he has developed a really cheeky little streak. He tends to interact with people by trying to touch their face. Kipper has developed a bit of a jealous streak in the last couple of weeks, he was particularly put out by Monkey sitting on my lap the other day. He wanted to have a cuddle. Its starting to cause a few issues when we do Monkey’s reading homework.

Eating – We are pretty much off the purees. In Kipper’s Eleven Month Update I mentioned how he only seemed to want to eat pureed food. Well now he’s gone the other way, happy to try anything and refuses food unless he can deed himself. I am not sure why the sudden shift change but it does make like easier to a certain extent. He particularly likes raisins, and will eat rice (as long as it has some sort of flavour) grain by grain.

Milk wise he is still one four bottles a day although sometimes he will not have the nigh feed. I am hoping that this sometimes will become a permanent thing. I am sure the reason he’s not walking is because of his size and I always worry about over feeding.

Sleeping – So its much better than last month, but I’m wondering if this will now fate that. It can be difficult to get him down sometimes especially if he has had a long sleep at nursery during the day. But generally he will now stay asleep. I am sure some of it is to do with his inhalers and that he’s no so unsettled with coughing all the time. Naptime is a different matter he will just drop off when he feels like it. Normally in the buggy or the car fitting around what ever we are doing. I may just have to accept that partly because he’s a second child and needs to fit round everyone else that he is just a little boy that doesn’t need a lot of sleep.

Toys – His favourite new toy is the swing in the garden. Although the ball bit was a source of fascination for a little while he much prefers a box or a basket with things inside which he can take in and out. I do remember Monkey having a bit of a thing for this, but I thought it came much later on. He got given a fire engine walker for his birthday that he also enjoys playing with. Although he much prefers to sit in it and be pushed around by his elder brother. he drapes his arm over as if to wave to his royal subjects, with a very smug look on his face. He especially likes it if Monkey goes fast when pushing… I am less keen.

Favourite Outfit – It has to be the bunny baby grow I brought for his Birthday. My very own Peter Rabbit!! It will be one I treasure. Although the ears kept falling over his face so getting pictures was a little hit and miss. Ive been looking for rompers this month for our impending trip to France, but theres been very little I like and those I do are not yet in stock. We have some well worn ones from Monkey which will do for the beach but I would like a couple of new ones.

I managed to giveaway two large blue bags of Ikea clothing for the 6-9 months and 9-12 months to a friend. I pulled out some of the sentimental pieces to make into a blanket. Although I am struggling to reduce the number of these down… thankfully the lady who will be making it seems adaptable. Although at this rate I think I may end up with one which would cover a double bed without any problems. 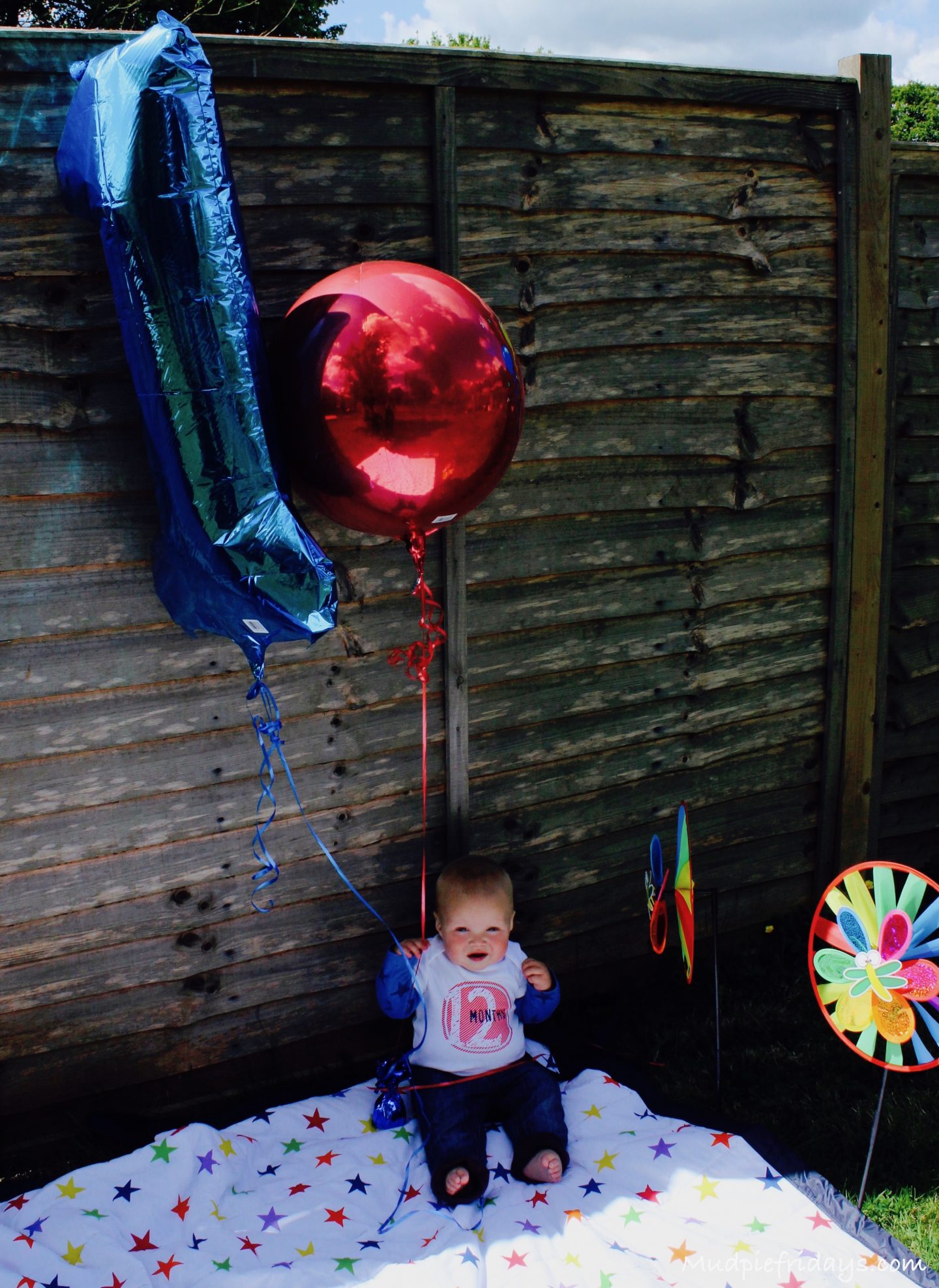 Things I don’t want to forget – He’s been more cuddly the last couple of weeks, and sometimes he will even make the ahhhh sound as he does it. His shocked face when he felt sand between his toes and the way he tries to put his dummy in your mouth

Looking forward to … our French adventure as a family of four. 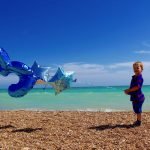