Review Henry VIIIs Sporting Academy – At the weekend we visited Hampton Court Palace to test out one of their new events for kids. The Henry VIII Sporting Academy. Monkey was very excited about the invite and couldn’t wait to try out the games. Did it live up to expectations?

I have only ever visited Hampton Court for the flower show and have not looked around the Palace before.  I was looking forward to doing just that. However that will have to wait for another trip. There is so much to do for the kids that we never got a chance to explore any of the buildings. Which at least gives me an excuse to go back! 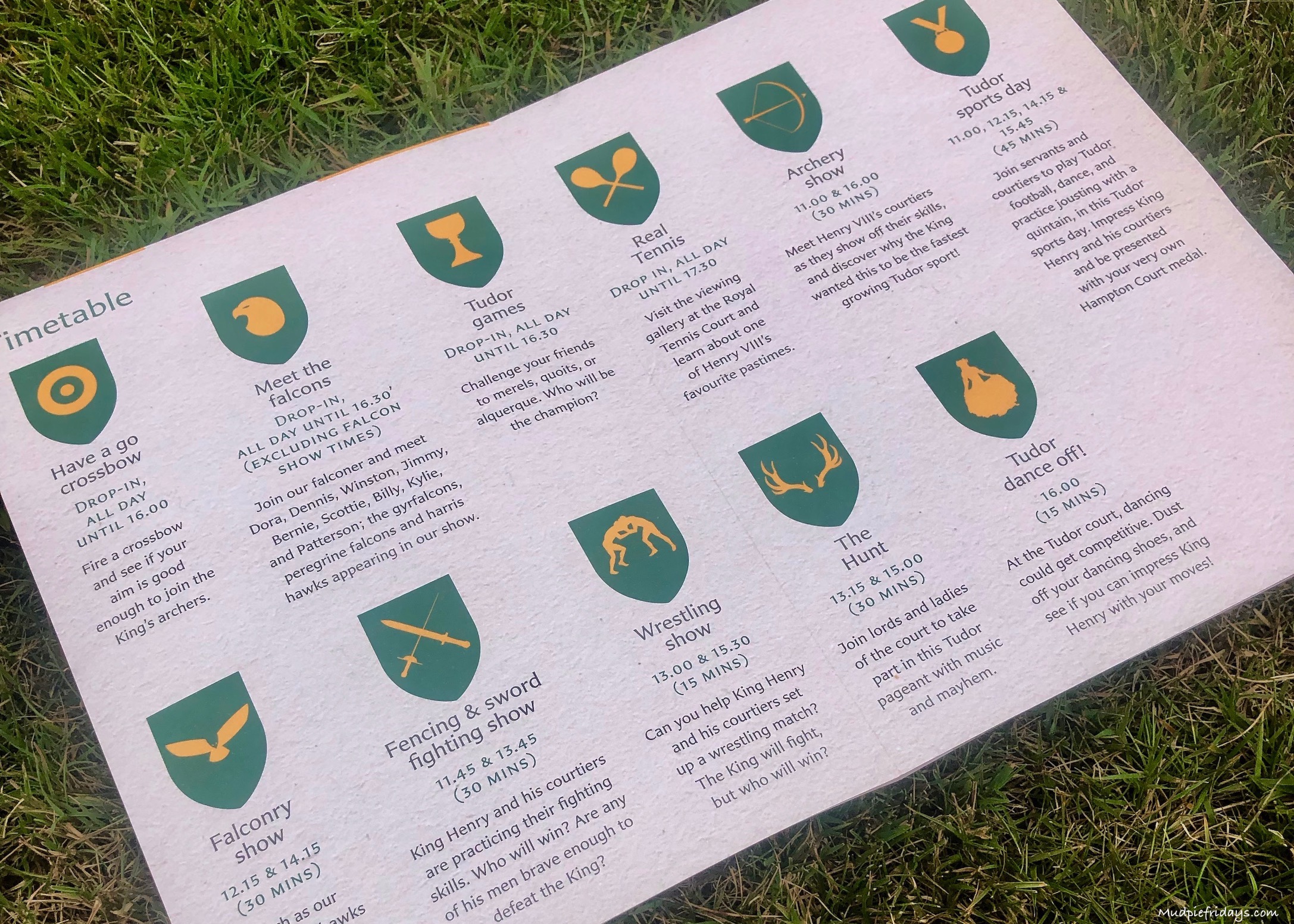 The Henry VIIs Sporting Academy is held at the back of the Palace on the East grounds. One thing I really like about the attraction is the amount of information available. Not only are there tons of different maps and leaflets depending on what you want to get out of your trip. But they also had lots of helpers to guide you. One of the maps showed exactly where all the different activities were. I liked that some are timed slots so you can build your day. Others are drop ins and available all day which means that there is always something to do.

We arrived around 11am and headed to watch the fencing and sword fight. Monkey particularly enjoyed watching everyone fighting with various different weapons. There was a good amount of adult humour thrown in as well which is always good.  The show lasted for about half an hour. It is possible to sit around all four sides of the show so plenty of opportunity to get a good view. Right next door there are some Tudor games which you can pick up and put down. So for little ones they are close enough to play with if they are not interested in the show. 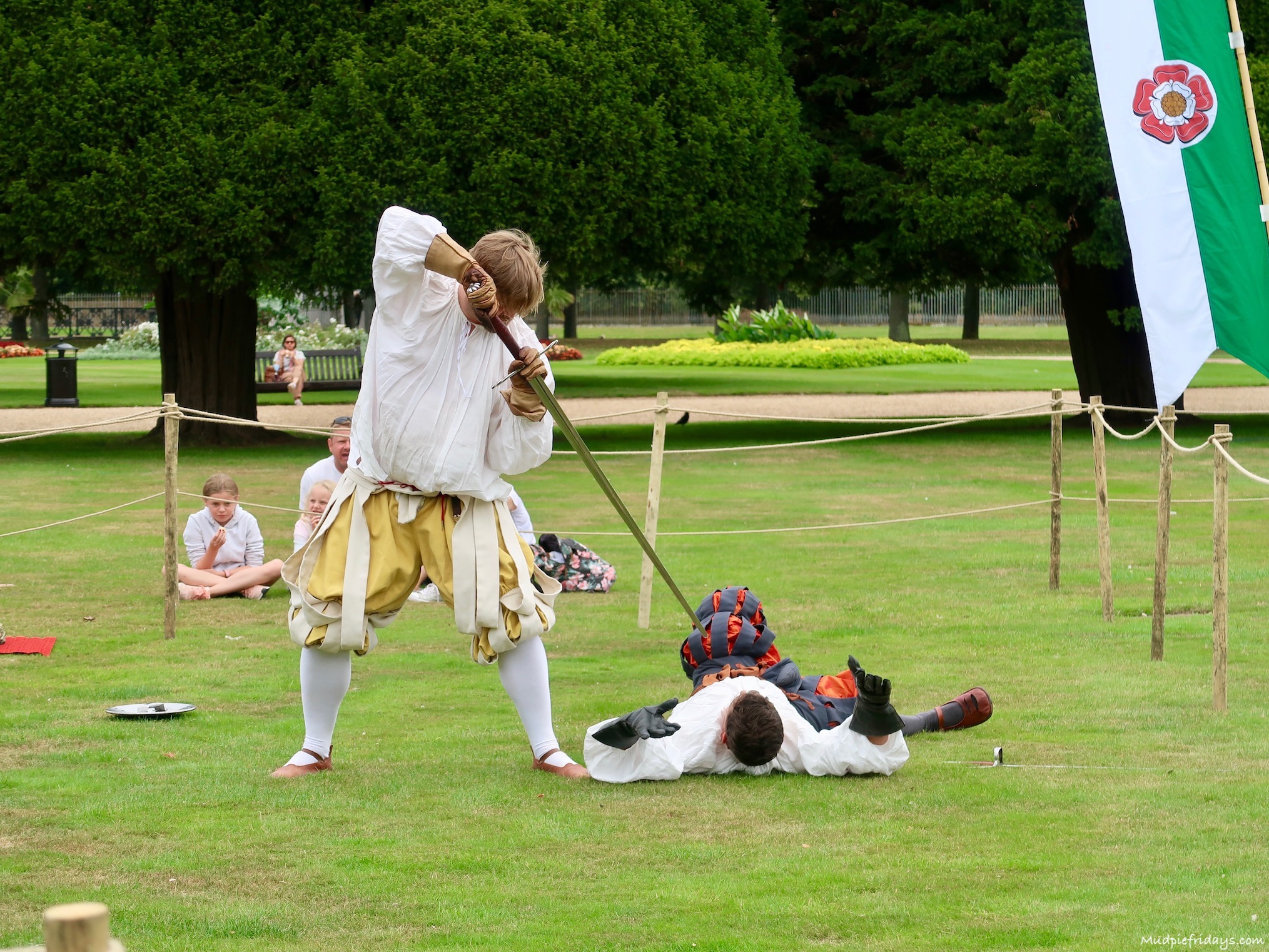 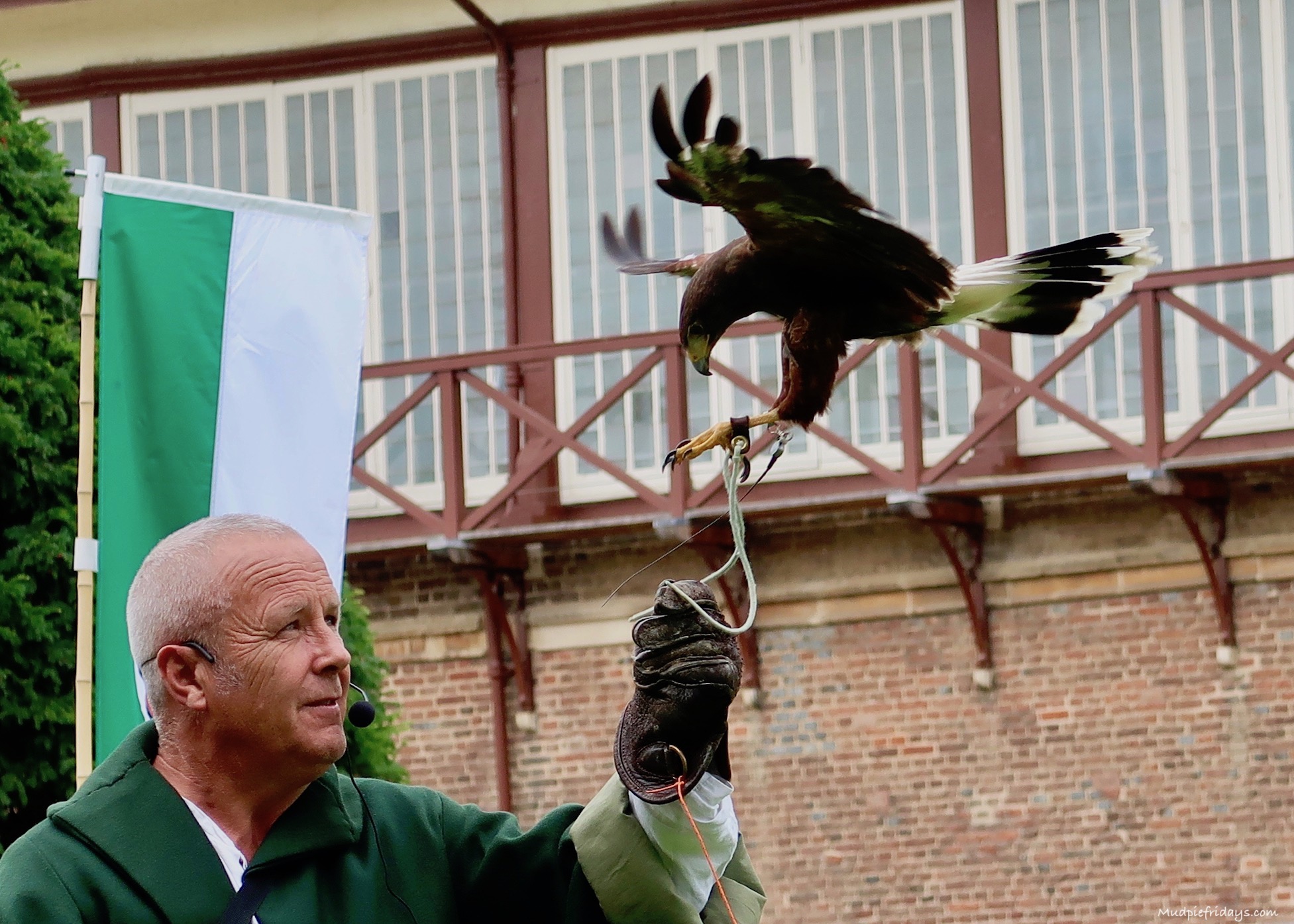 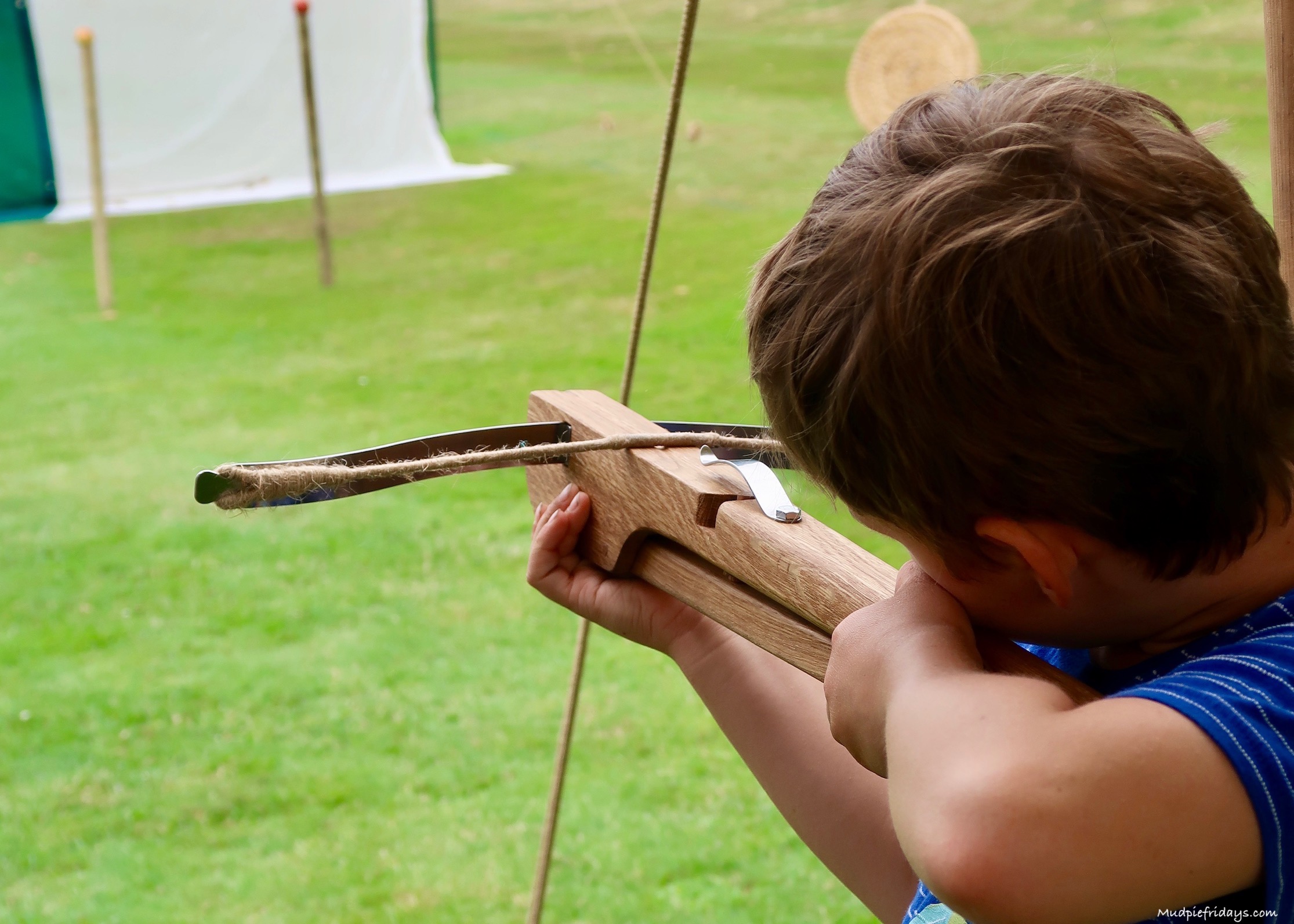 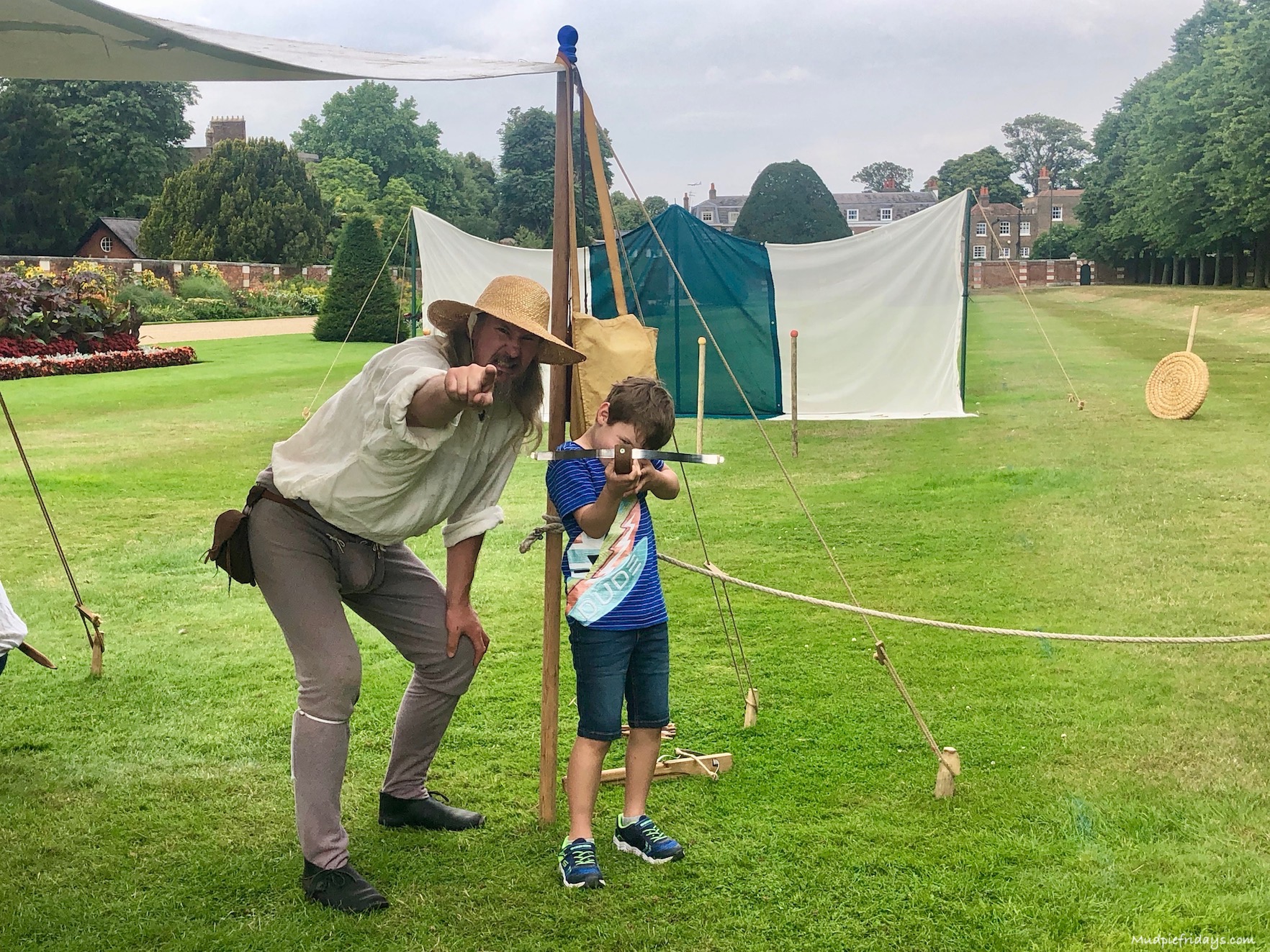 Next we headed over the falconry area which is a short walk away to watch their show. There is a Henry VIII theme that runs throughout the day. In this show Catherine of Aragon presented one of the birds and then resided over the proceedings. The birds shown definitely put on a display swooping around the buildings and the trees. The boys thinking it hilarious as they resided in the trees above them. As well as the show running at various points throughout the day, you can pop by and see all the birds at any point.

Once the show was over and with it threatening to rain we went next door to the crossbows. An activity you can drop into. On the back of the map there is a list of alternative locations for most of the activities which is so clever. After all we never know what the British weather is up to. The crossbow on the other hand was a massive hit with Monkey. Kipper was a little nervous and didn’t fancy it. But Monkey went back for a second time. I think given the option he probably would have stayed there most of the afternoon constantly re-queuing. The staff and actors were really helpful and friendly with the kids which for me really makes a difference. 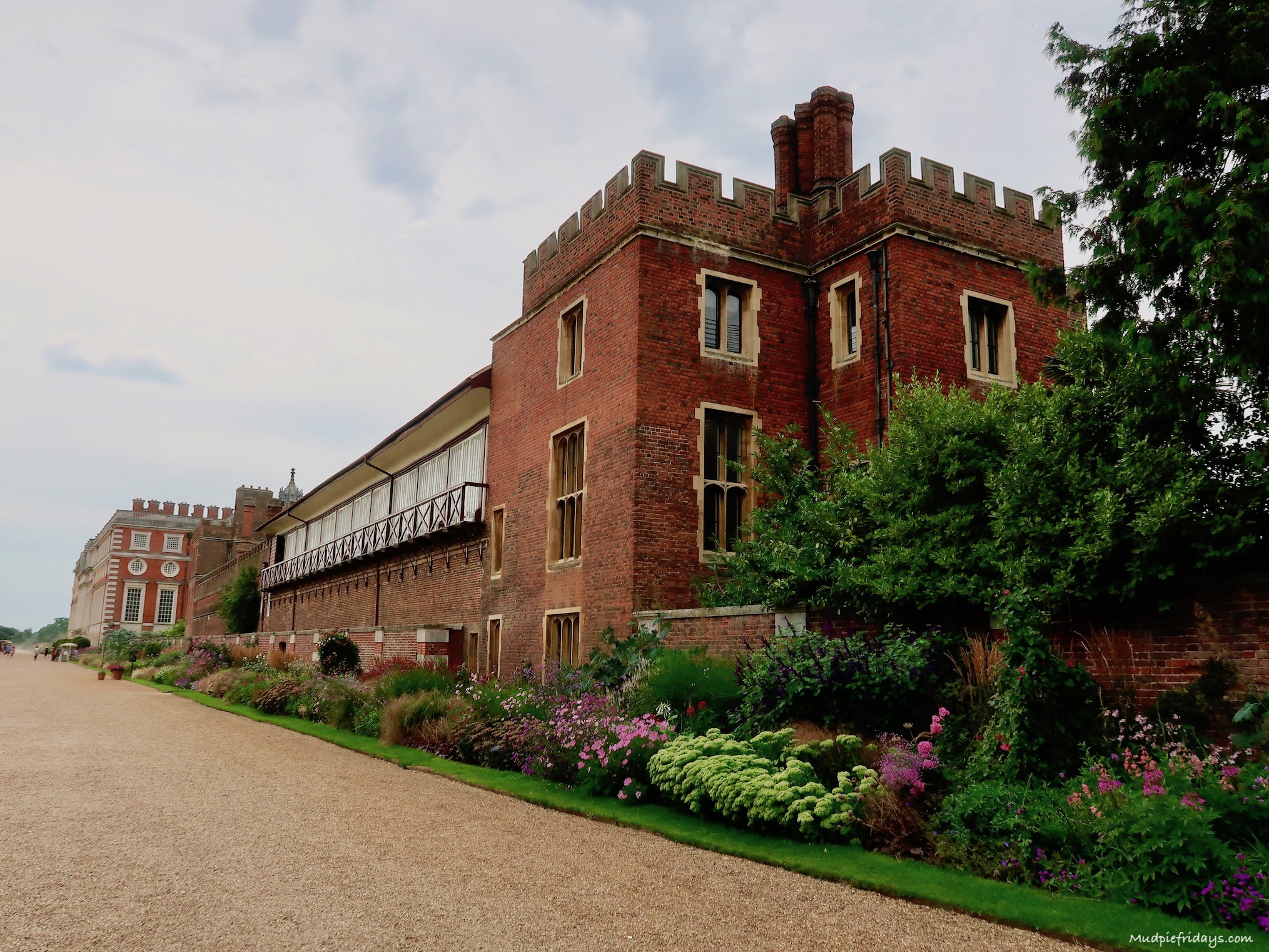 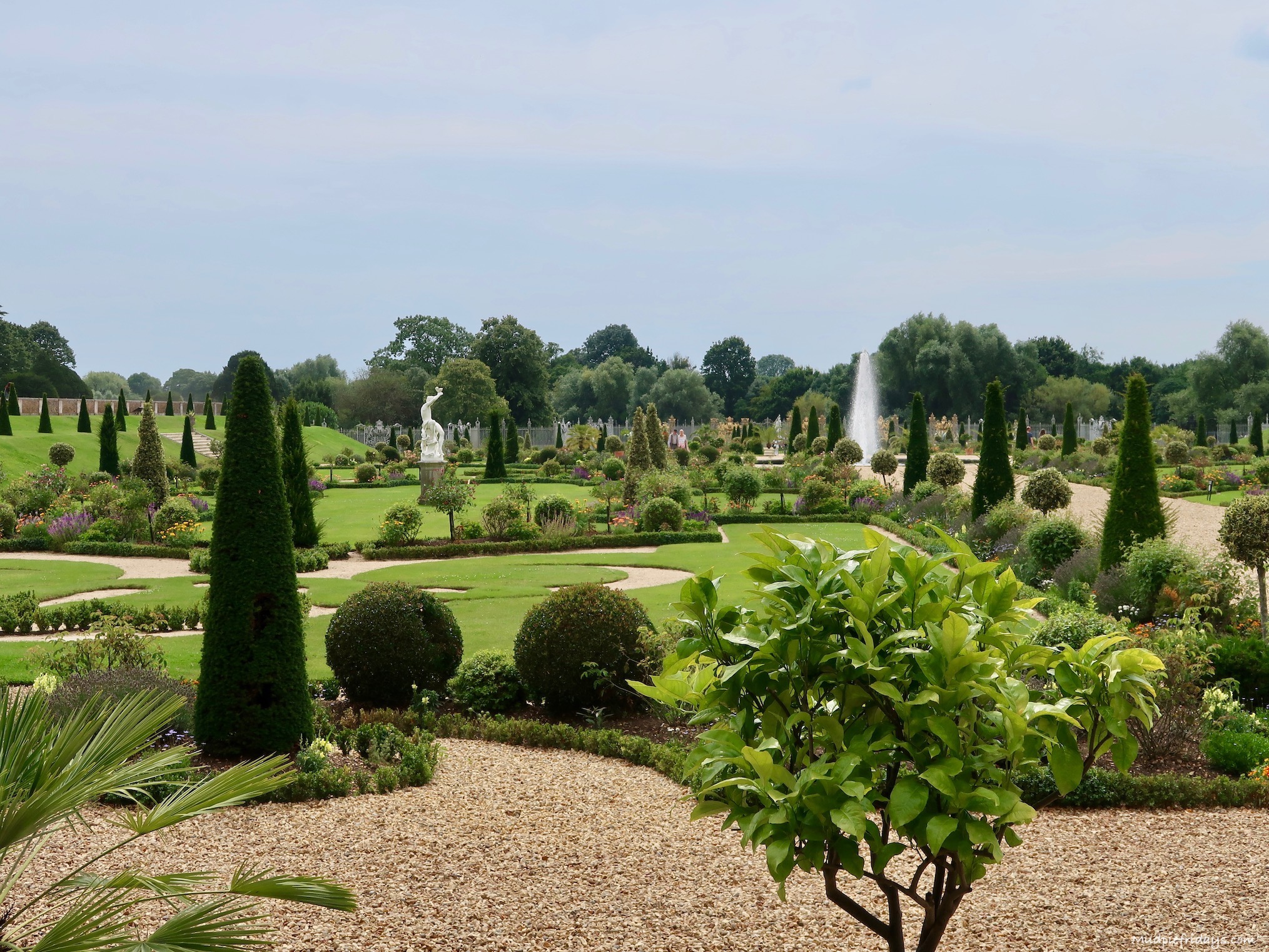 Monkey was desperate to have a go at the Sports Day and we had a little bit of a wait. So decided to have a ride on the horse and carriage. You do need to pay in addition for the ride but its a great way to see the grounds with young ones. As you go round there is a historic tour guide with you, so you get to understand more about the working Shire Horses and the Palace Gardens. It also served as a good opportunity for the boys to sit in the shade.

While we were waiting for the ride to go we saw the ‘Hunt’ which involved actors in masks being chased by children. Good old fashioned fun that really kept the kids entertained. The Sports Day lived up expectations and more. They had dancing and football. Kipper joined in too and found the football particularly fun. Since in Tudor football you can pick up the ball! At the end of the forty five minutes each child is awarded a gold medal with Hampton Court Palace printed onto it. 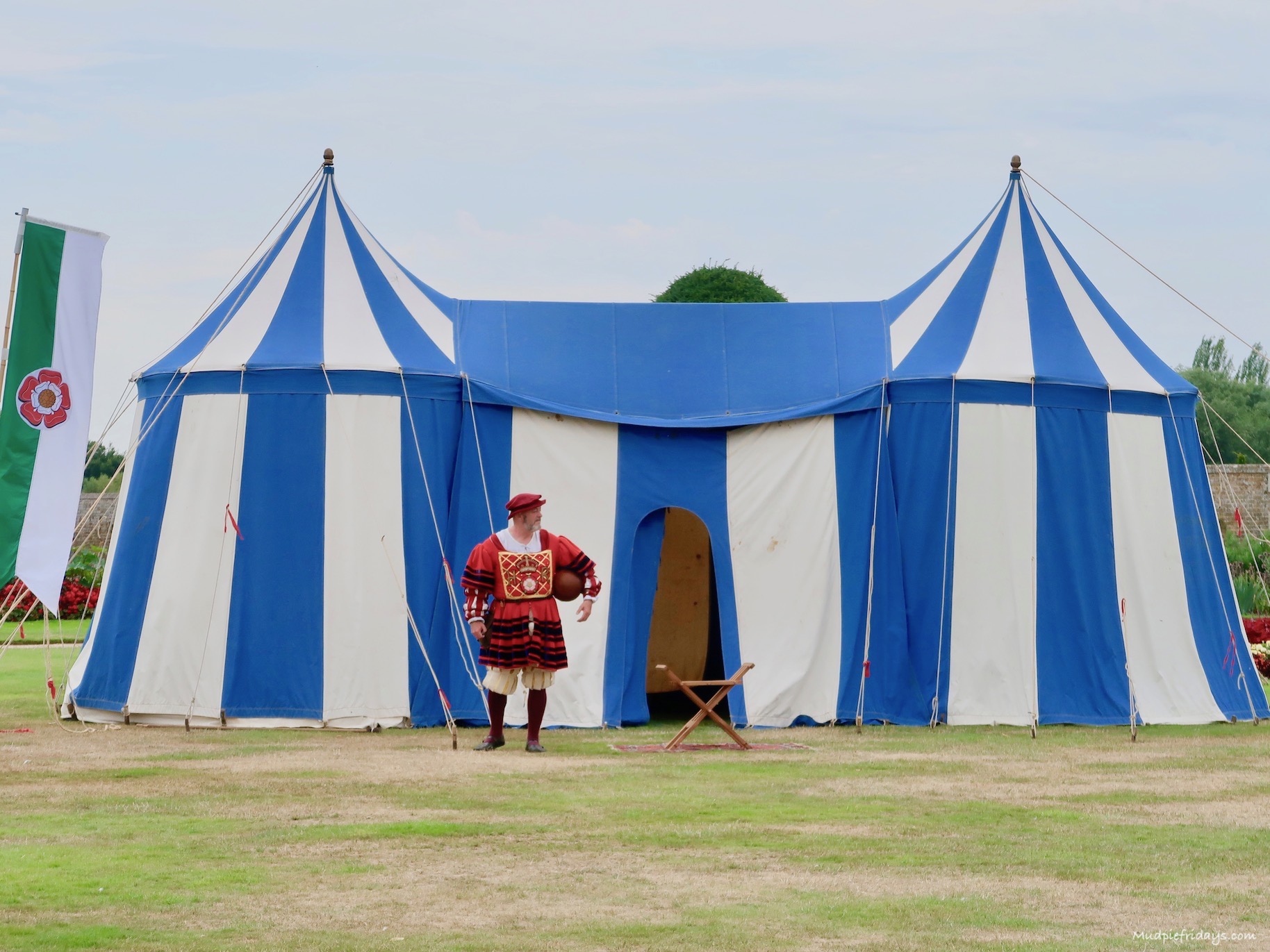 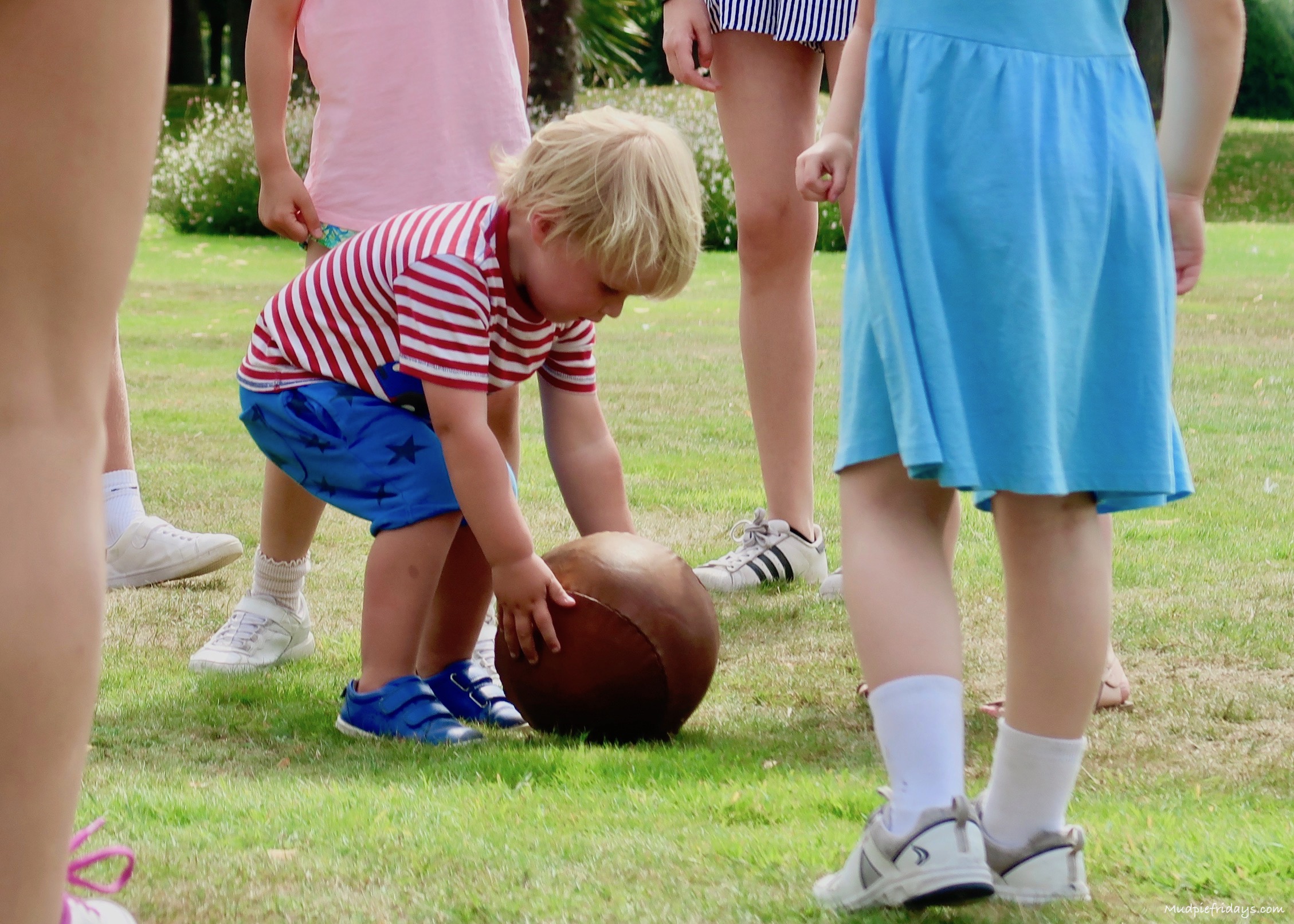 I was so surprised when I realised we had spent four hours taking part in the sporting academy. You really could do that and nothing else. The boys really wanted to try out the Magic Garden before we left. Entrance is included in the ticket price and its right next to the beautiful vegetable garden. Unsurprisingly it was very bus, there is so much to do and its so big that we could have easily spent another four hours in there as well.

Kipper found the water almost straight away. Thankfully I had packed a second set of clothes for him, but not for Monkey. Next time we will take swim wear with us! There was  also a sandy area with more water that they enjoyed playing in together. Before Monkey headed for the treehouse and Kipper enjoyed sliding down the hill. With plenty of seating in the middle, toilets and a cafe it had everything we needed. If you are visiting to take part in the Sporting Academy then I would definitely recommend allowing a bit of extra time for the Magic Garden 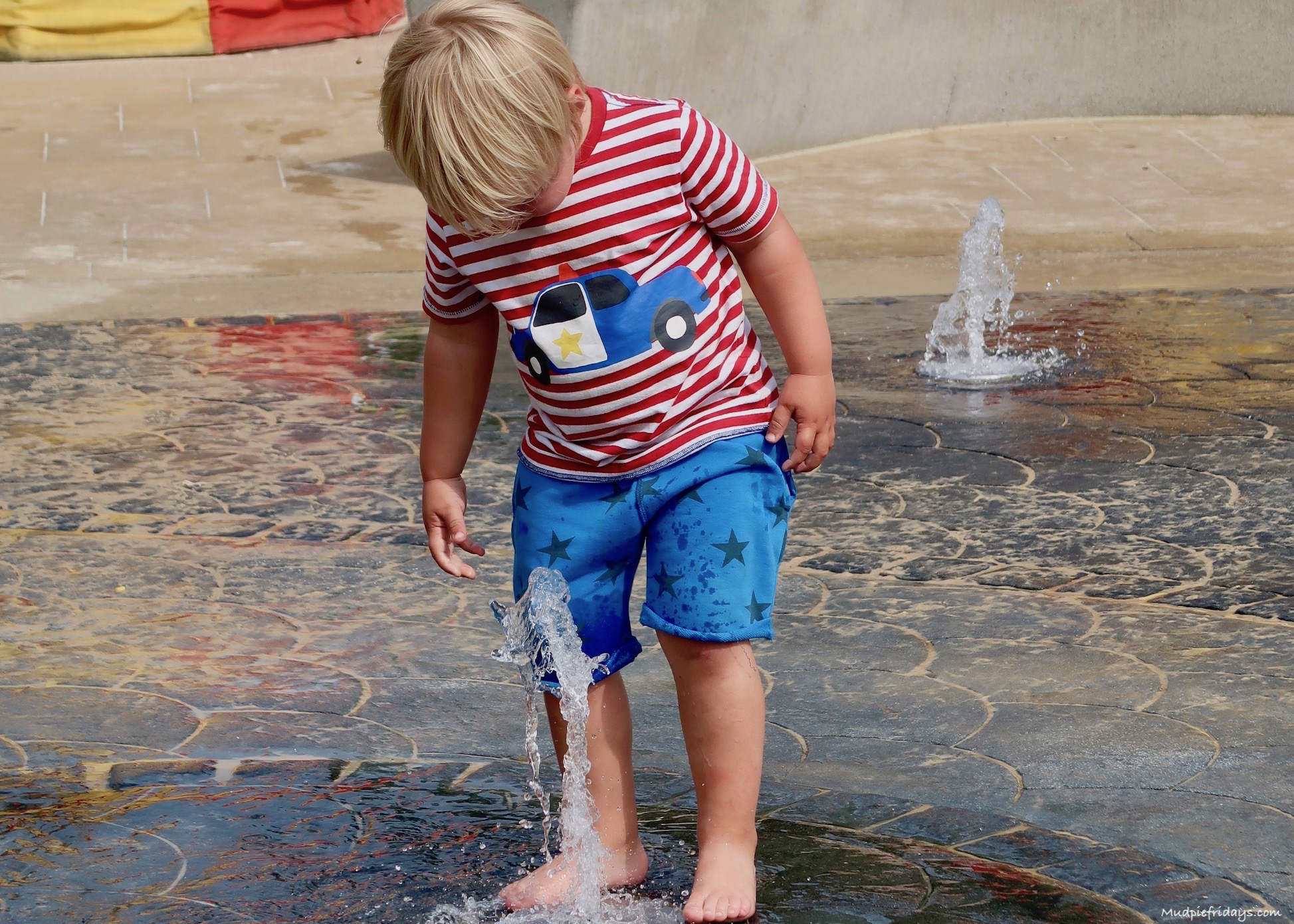 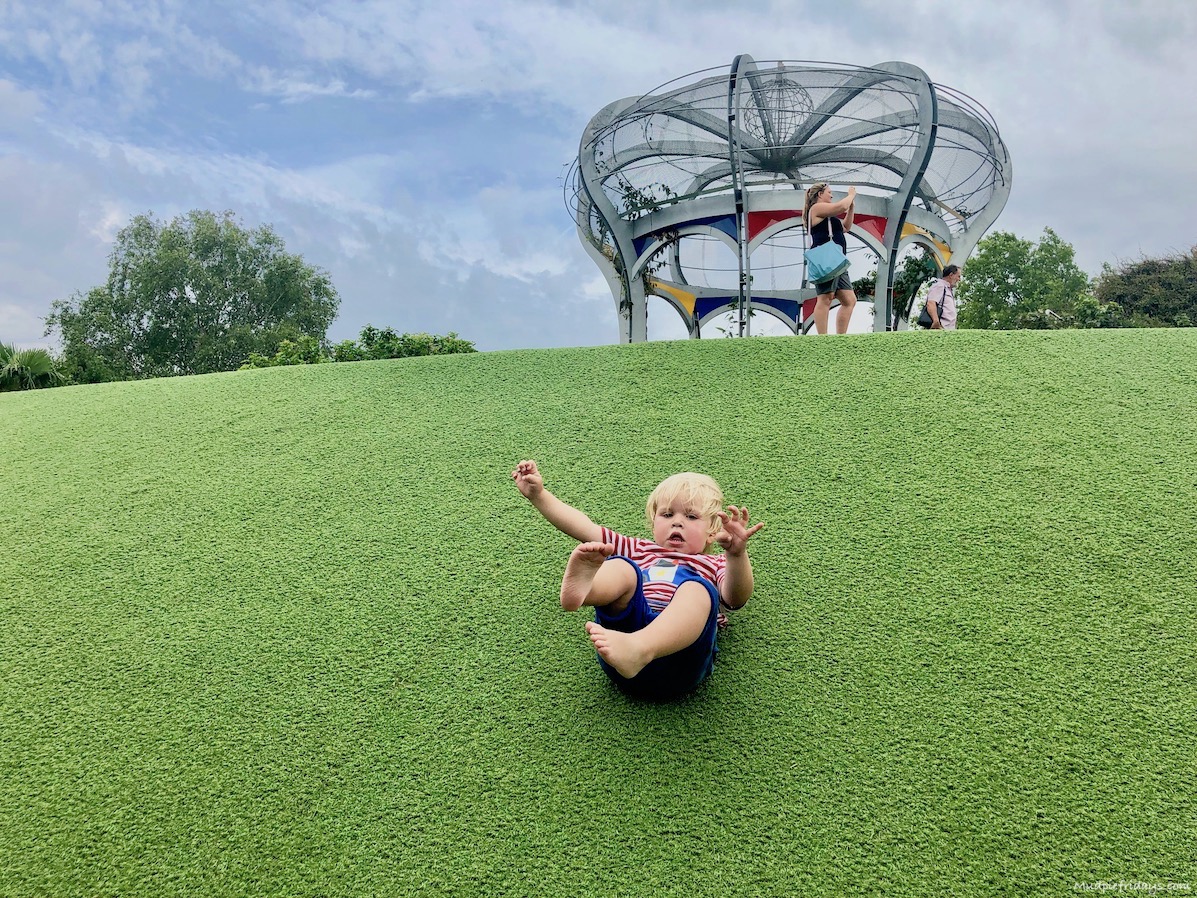 We had a fantastic day at Hampton Court Palace taking part in Henry VIIIs Sporting Academy. It is running until the 11th of August and well worth a visit if you are local. 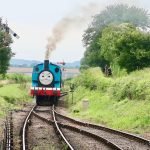 Review A Day out with Thomas on the Watercress Line