I have always had this nagging thing in the back of my mind about buying Monkey a sandpit. It has always seemed to gravitate towards sand, be it in the park or round a friends house. If they have a sandpit he’s in straight away. He had a small sand table when he was about eighteen months but it got wrecked as it had been left outside. Theres nothing worse than sand with bugs and old leaves in it! So when we offered the chance to review the Flip Sandpit by Wickey which came with the all important lid I of course said yes. The timing was perfect, as it was the beginning of the Summer holidays and the warmer weather was finally making an appearance. 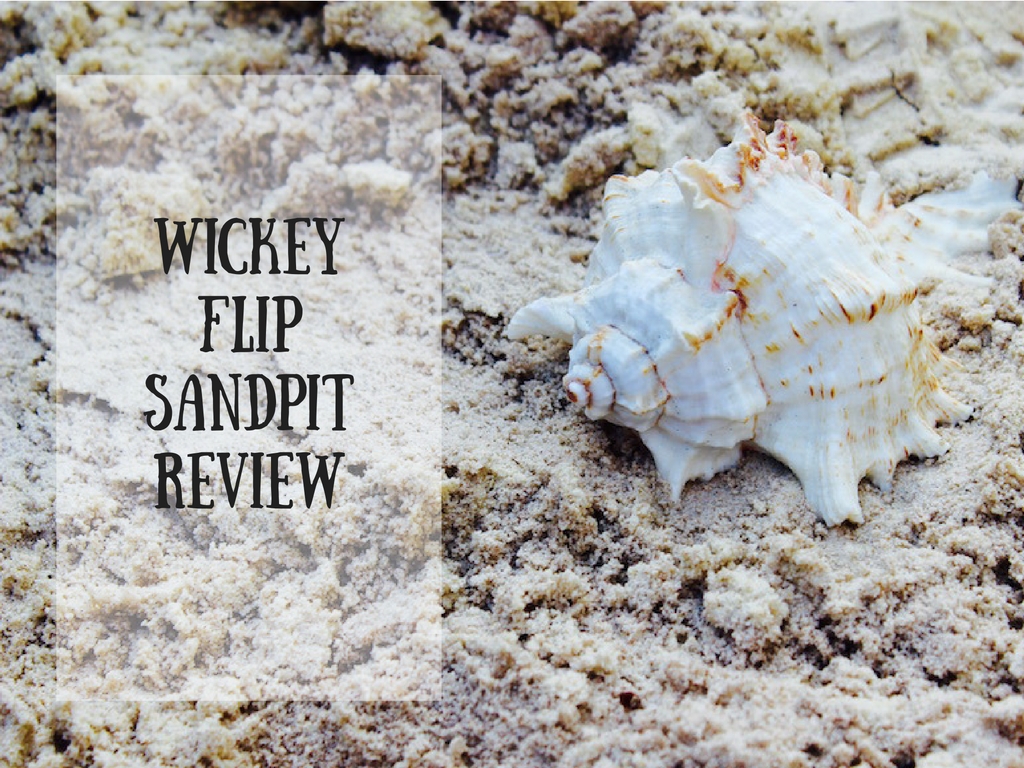 Wickey make a whole host of wooden play equipment for the garden including, climbing frames, play houses and of course sandpits. The Flip sandpit comes in two sizes 100cm x 125cm or 120cm x 125cm, we opted for the larger one as it would fit perfectly next to Monkey’s climbing frame. They also have slightly larger Flippey sandpits which go up to 150cm x 165cm. It arrived flat packed, Hubby took one look at it and rolled his eyes ( I put some beer in the fridge for later!). 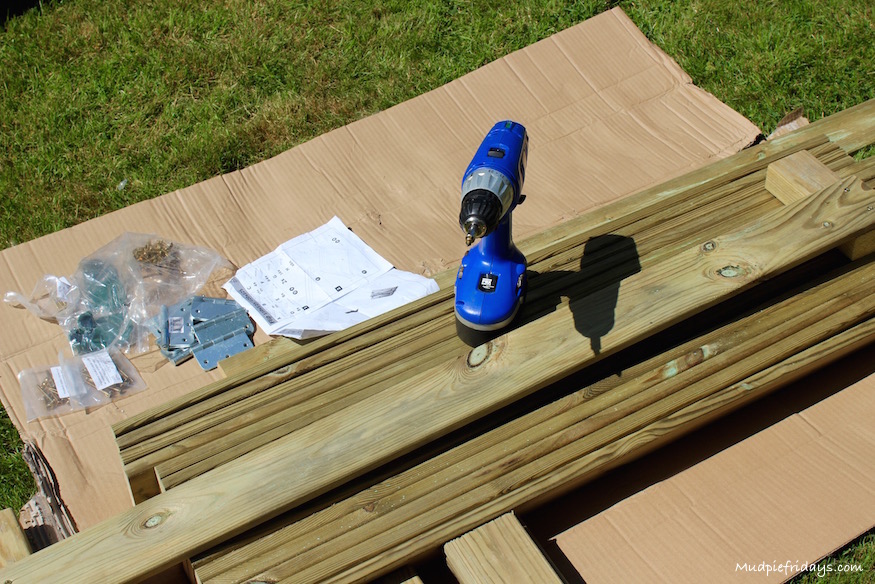 Thankfully it was actually quite straightforward to put together even with Monkey lending a hand! Although it did take him quite a while, probably getting on for four hours. I’m not sure how much help Monkey actually was, probably more of a hinderance!  I would also  just say that the instructions are pictorial and there is an amount of measuring required to make sure it goes together properly

The frame went together really easily and quickly. Its made from hard green KDI impregnated treated wood, which basically means it doesn’t need to be protected in anyway from the weather.

The lid took a bit longer due to the measuring. One of the other features of the flip sandpit is that the lid essentially folds creating seats on each side. The one thing I would say is that it will need to be covered with a tarpaulin in the Winter months to stop the bugs setting up home. As although the lid does cover the top its slatted in nature, which it needs to be to make the design work. However that does mean that there are gaps between the slats. All this building is thirsty work: 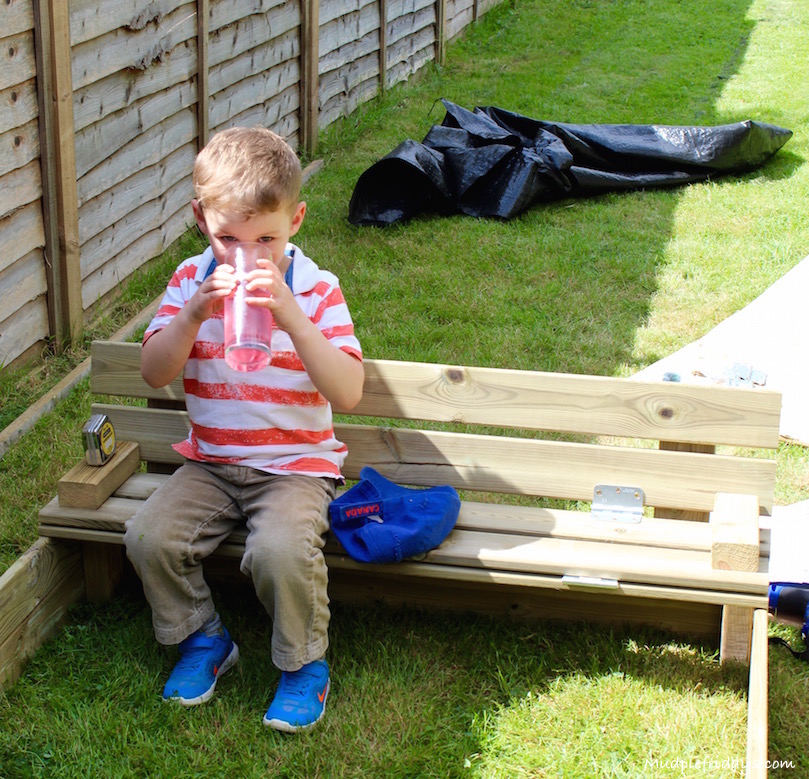 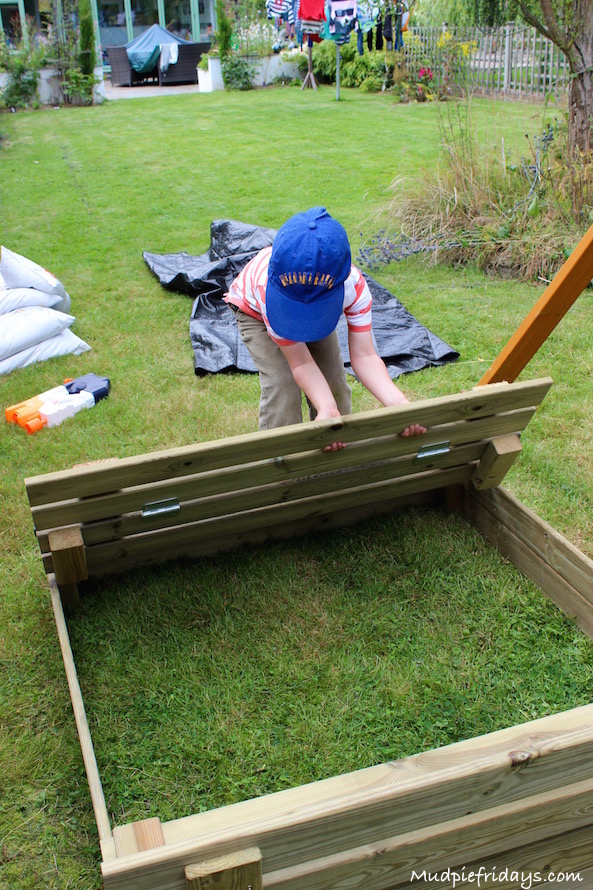 I do like the seats as it will mean I have something to sit on when Monkey wants to play! Saying that they are the perfect size for children and I am sure will be perfect for sitting on while playing, drinking or eating ice creams or ice pops!

The lid effectively folds in half thanks to the heavy duty hinges. It is also very easy to use and Monkey took great pride in showing me how it worked. Putting it up and down himself, at just four he’s average build and height so that should give you some idea if your little ones will manage it themselves as well. I think Monkey would struggle if the lid came off as one and would need us to lift it on and off for him.

Monkey was very keen to put the sand in but before we did we needed to put in a Sand Foil to stop the grass coming up into the sand. There was no instructions to do this, we decided not to tack it in place or cut it. Instead we folded the edges over. Although we don’t have any intention of moving the sandpit, by doing it this way it would mean that we had the option of storing it away over the Winter months if we wanted. 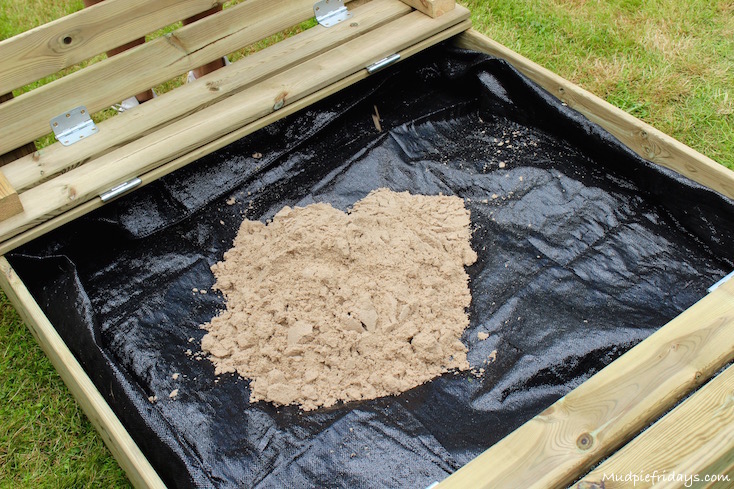 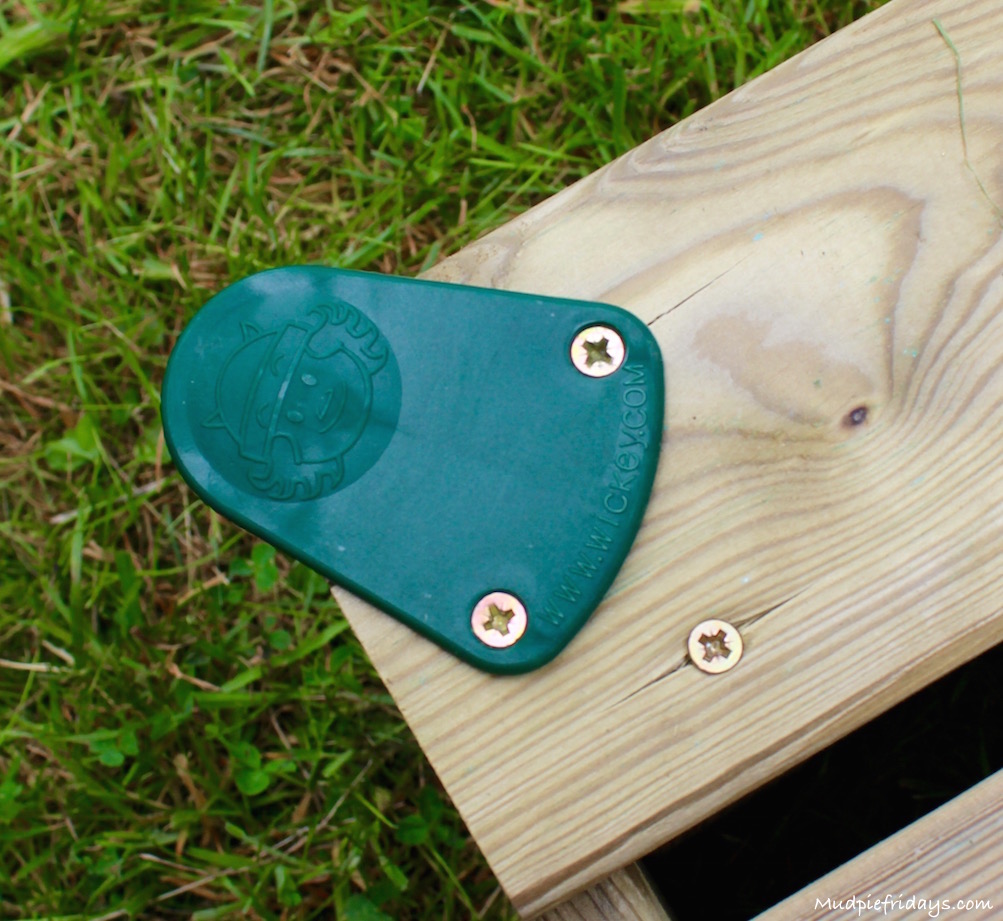 You do need to purchase the liner separately, the one we used was 200cm x 200cm. Wicky had also supplied us with a set of four sand pit corner protectors, designed to make sure it is as safe as possible. Made from heavy duty plastic they are simple to fix.

The sandpit took 10 bags of 15kg play sand. That didn’t fill it completely but it was ample for Monkey to get stuck into it.

The Flip Sandpit RRP is £93.95 but its currently on their website for £70.50, the ground sheet is normally £10.95 but on offer at £8.25 and the set of four plastic sandpit corner protectors are also on offer at £8.25. It is more expensive than the cheaper plastic alternatives but it looks great in the garden and should last longer than some of the cheaper alternatives.

The only thing which I am a little disappointed by is that we still require a tarpaulin to keep the sand dry and the bugs out. However this wouldn’t stop me recommending it.

Linking up with TriedTested