Last weekend we decided to venture a little further afield and try another National Trust property over near East Grinstead – Standen House. It came recommend by a friend who also joined us there. Standen House is an Arts and Crafts family home with Morris & Co. interiors, set in a beautiful hillside garden so not automatically on my list of places to visit with Monkey. However looking on the website there did look like a fair amount to keep children entertained. 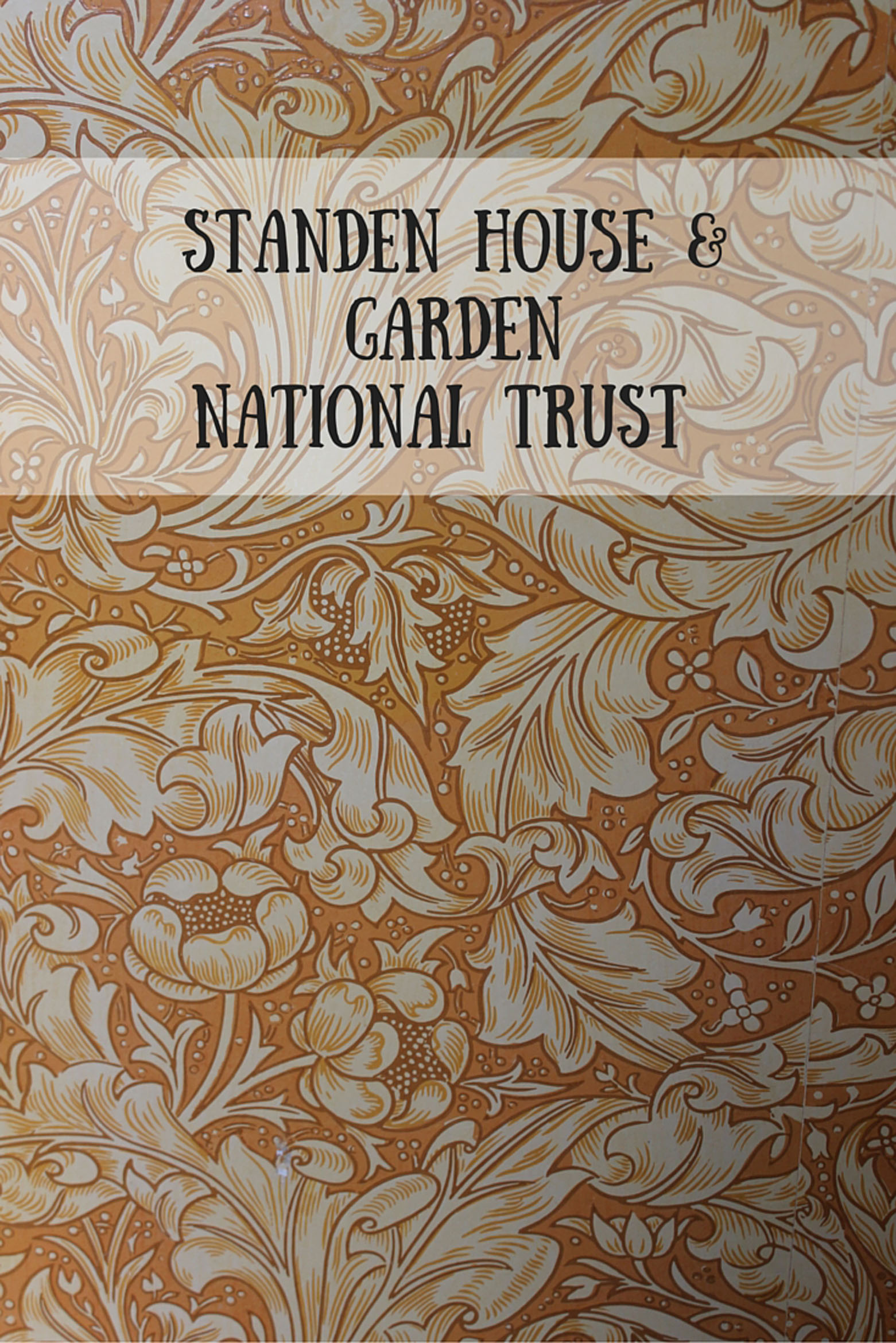 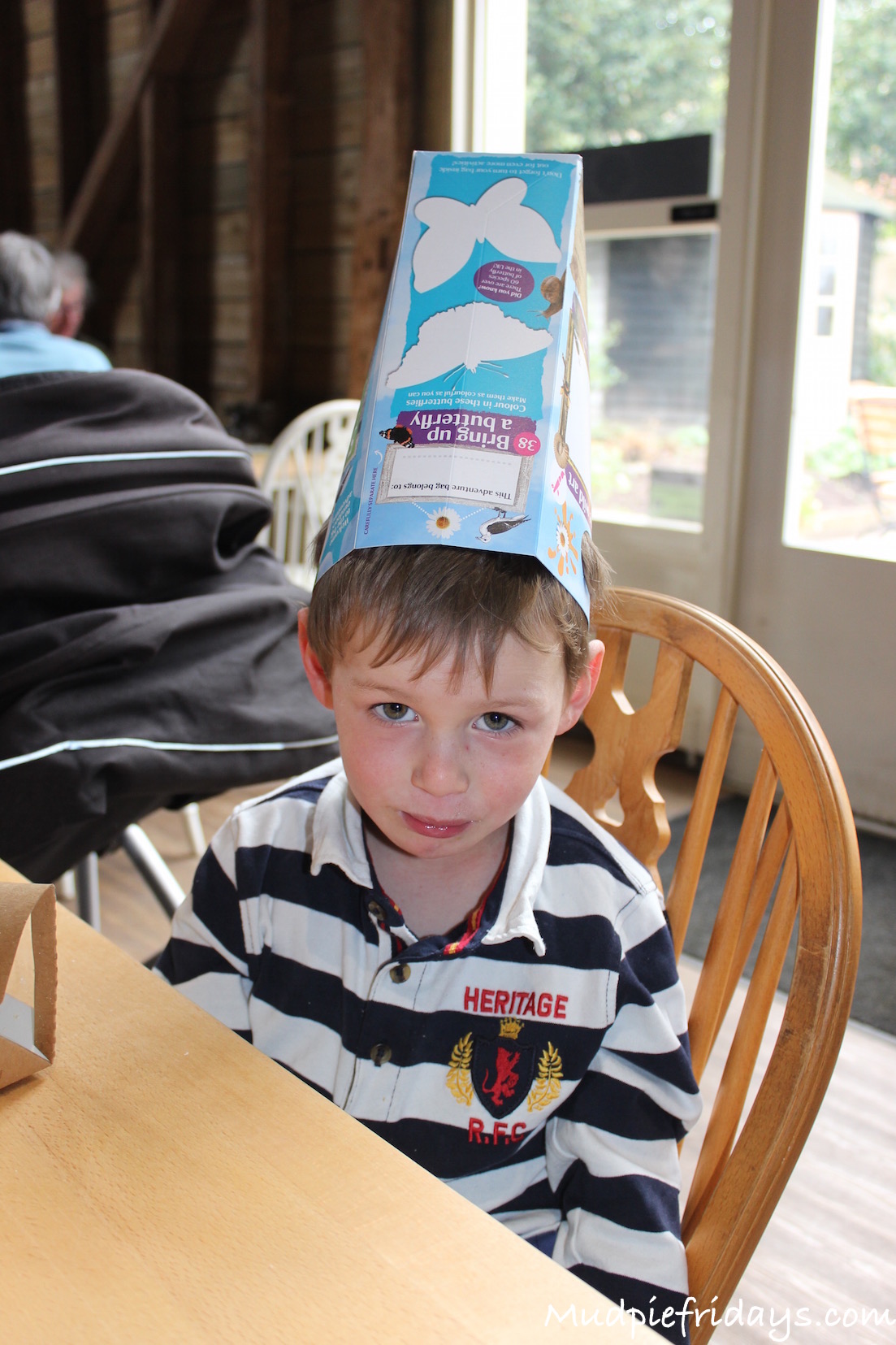 We arrived around lunchtime and the carpark was busy, I could imagine that parking during peak times could be interesting. As you walk up to the house you pass the vegetable garden, they have a little stall with seasonal produce for sale. There were lots of volunteers when we visited sorting out the gardens for the spring, cutting back fruit bushes and turning over soil. They also have a chicken house with some lovely white hens named after the people that work in the garden. We decided to head straight for the cafe. There was lots of seating outside although a little cold so we squeezed around the last remaining table. Monkey opted for a lunch box while I had a jacket potato, the food was good and well priced just as I have come to expect from the National Trust. They also has a small selection of hot meals. Once we had finished Monkey decided his lunchbox would look better as a hat! Although he looks miserable in this photo he was just larking around and all the other ones are blurred so I opted for the miserable one!

From lunch we headed towards the house, the friend I was with loves the Morris & Co wallpapers and fabric. There are plenty of people on hand to ask questions and to make sure all the children were behaving themselves. Thankfully they had an egg hunt game on, where we had to find a little natural looking egg in most rooms. Ten in total, for the older children they also had spot the wallpaper. I do like the fact that they always think about something to keep the children amused. 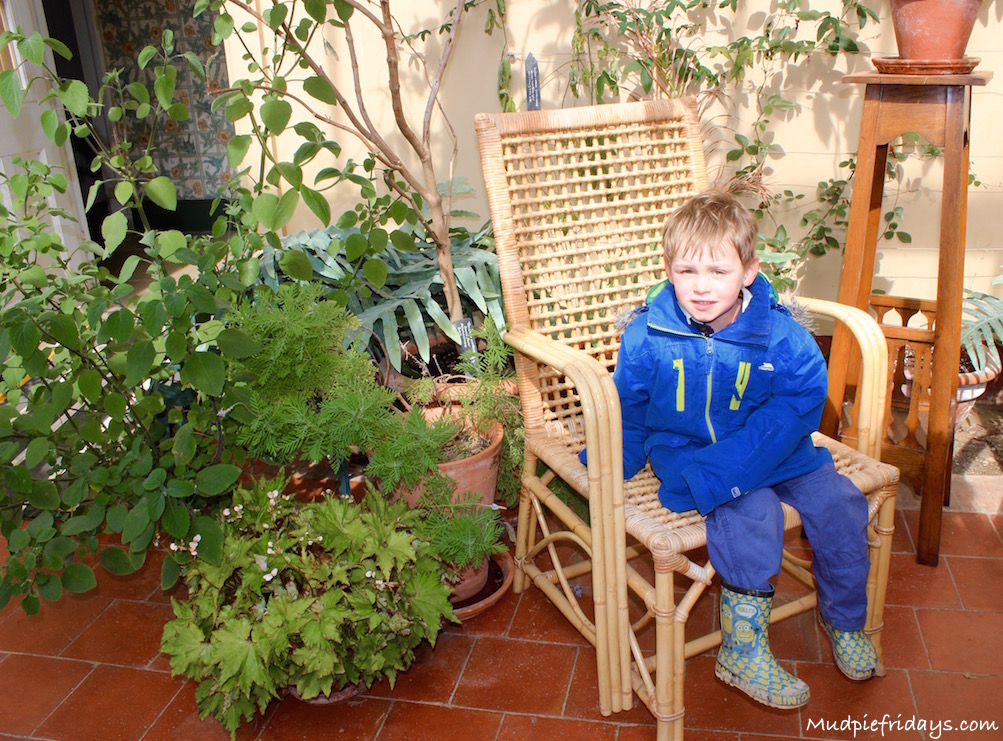 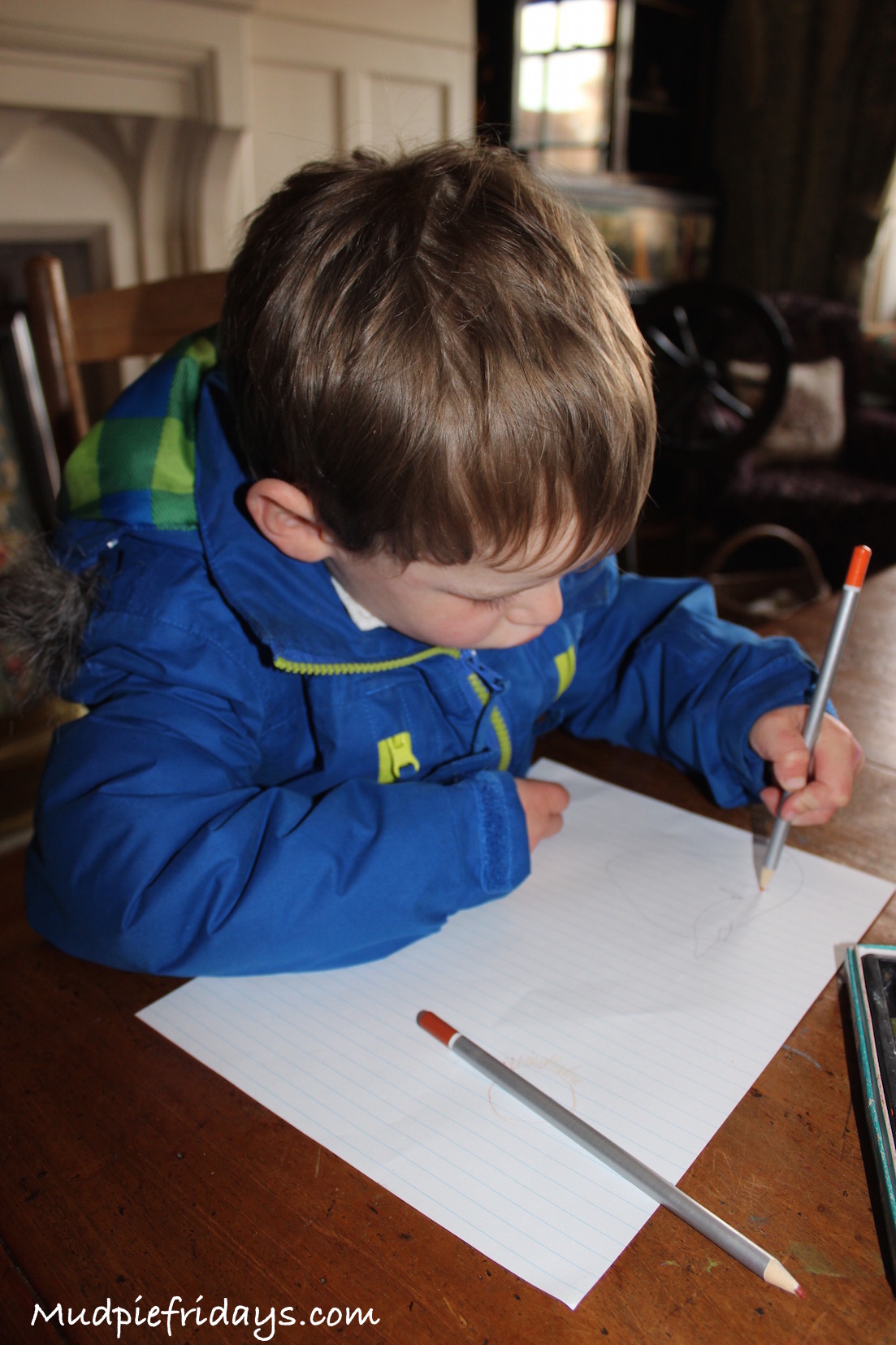 We had a reasonable wander around with the promise of going to look for the natural play area once we were finished. The wallpapers are beautiful and we learnt a lot about the history of the house from the volunteers. Monkey was particularly taken with an old tin bath and the fact they didn’t have running water (although the house did have an actual bathroom on the ground floor unlike many of its it time). In one of the rooms they offered the chance to do some drawing which kept him and others entertained while we looked around. He insisted on drawing some Easter Eggs and then wanted to draw a picture for the baby. It was a picture of him, the baby and me. He drew me while I drew Kipper and him. Also contained within the house is a toy room, it was  originally a play room for the owners children and the Trust had decided to keep it as such. We didn’t manage to find it initially, only when we were leaving did we spy the entrance which is separate to the main house.  Although we were on our way home by then, but its a good option for Spring Showers! 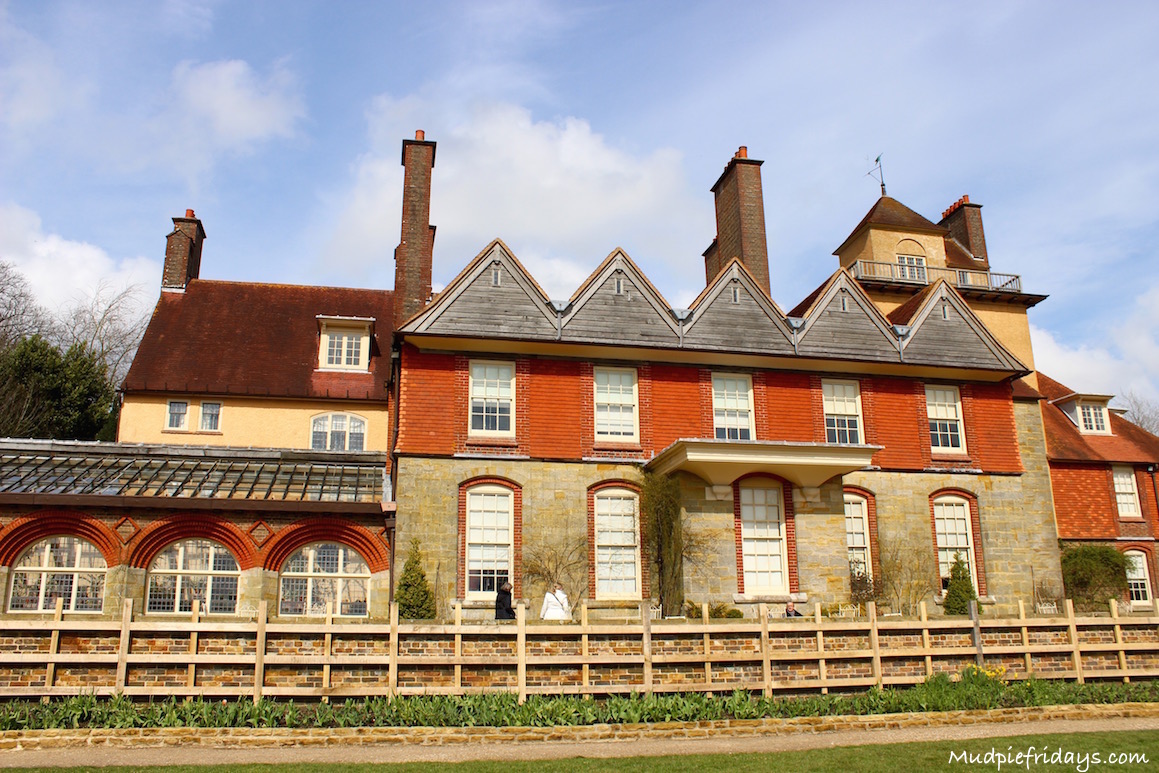 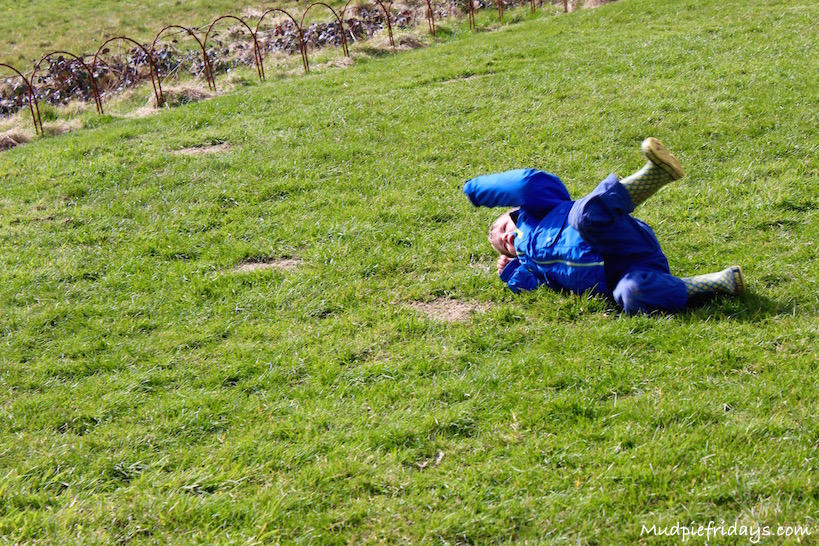 You need to go through the giftshop to get out of the house which is probably my only criticism as of course Monkey wanted something… Once outside we walked around the back of the house, it has a lovely patio area and I can imagine sipping tea (or something sparkly) in the good weather. The house overlooks a small lawn, with the groundsmen getting reading for the Tulip Festival coming towards the end of April. If Kipper’s not made an appearance by then we will be back to visit, as tulips are one of my favourites. The lawn has a slight hill to it, so you are invited to take part in the National Trust’s 50 things to do before you are 11 3/4 – roll down a hill. Monkey needed no encouragement what so ever.

From the lawn we headed up round the back through the steep gardens to the natural play area. It was starting to get quite cold so we didn’t stay long, but again I can imagine picnicking in the Summer with the kids running around in and out of dens which they have created themselves or have been left from someone else’s play. 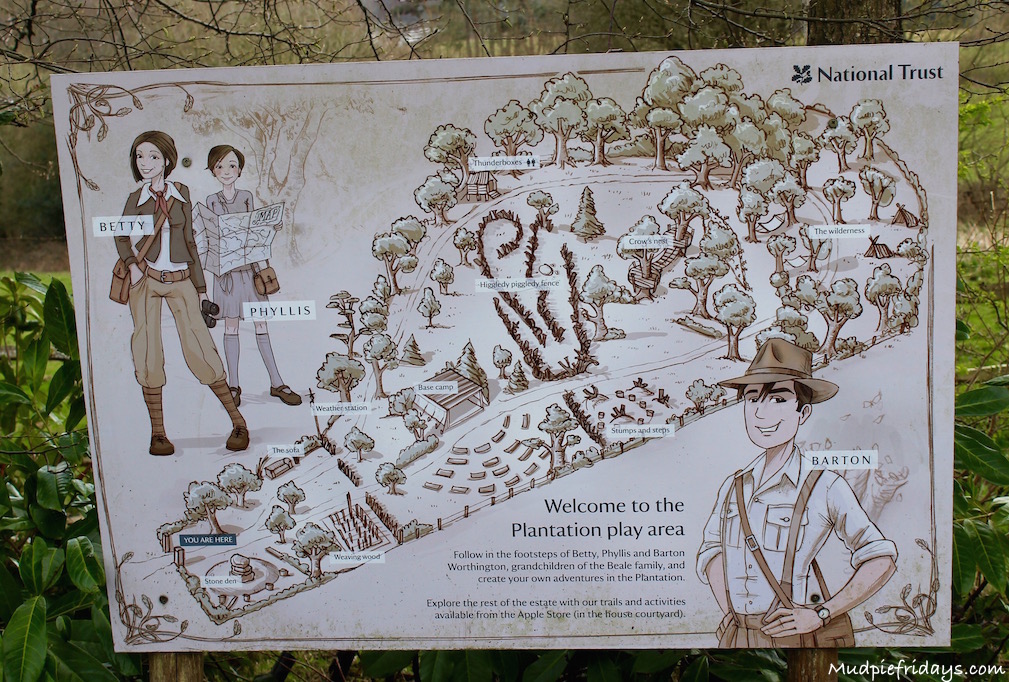 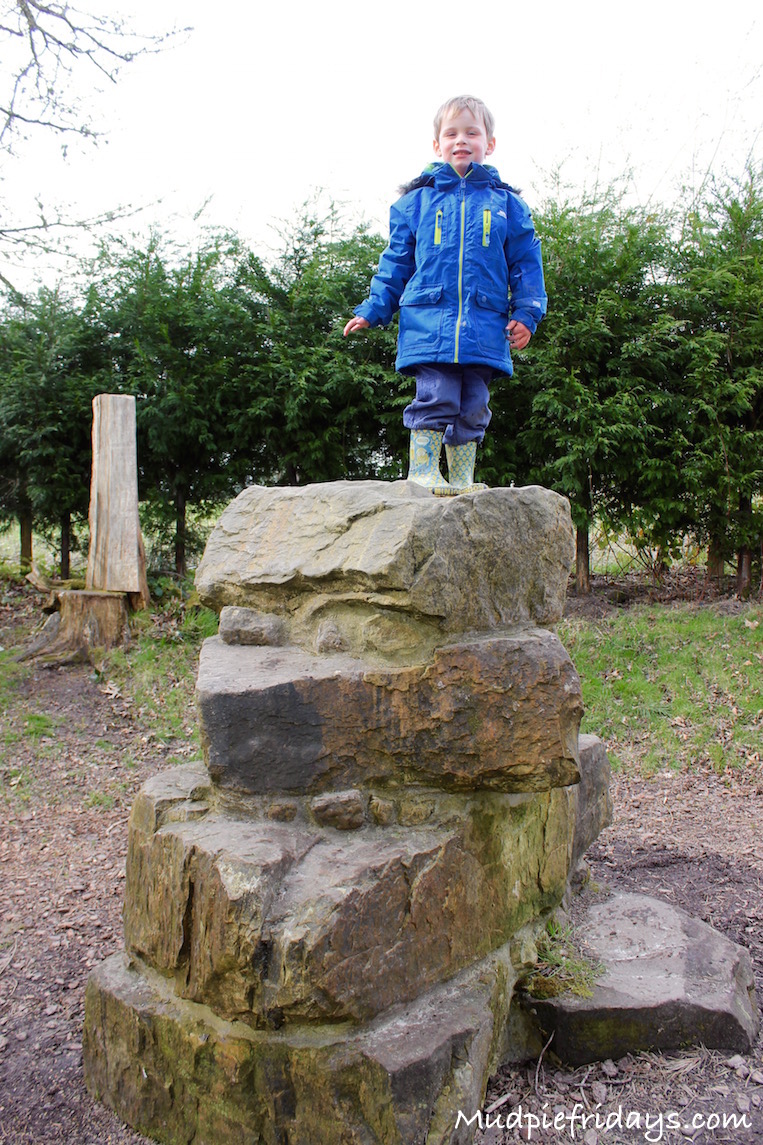 As far as natural play areas go theres a lot to see and do, I can imagine all sorts of things going on a base camp in the Summer holidays. Monkey enjoyed the Stone Den climbing easily to the top, playing in the Crows Nest and jumping on and off, ringing the bell in the Weaving Wood and climbing all over the Higgledy Piggledy Fence. (I am not sure its really meant for climbing on!).

There is a fair amount of work going on around the gardens at the top which I am sure will look stunning when finished. As the weather was closing in we decided to head back to the cars. In total we were there for about four hours and probably didn’t even see half of it. Next time I would like to look around the vegetable gardens and walk in the woodland. Monkey of course would like to spend more time in the play area and collect more sticks! I think it will soon become a regular haunt for us in the warmer months. 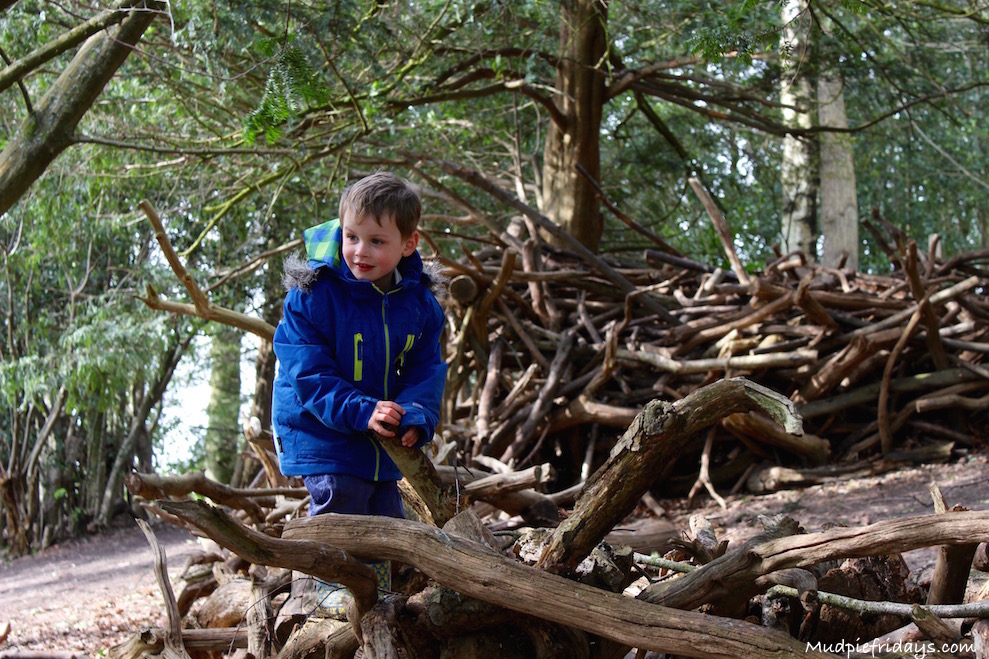 Have you been to any National Trust properties recently? We would love to hear about them in the comments below. 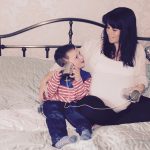 Things to do on maternity leave before baby arrives