24 hours in Warwick with little ones: In February we visited Warwick for our monthly weekend away, while there we visited Warwick Castle and then on the second day we were a little stuck. I had visions of us wandering around the city taking in the old wobbly buildings, exploring the streets and maybe stopping for a drink or a curry. Just like we did in our 24 hours in Cambridge. However the weather had other ideas and it became apparent that it wasn’t going to be an option. Of course we will have to visit again so its not all bad news. But it did leave us with two little ones to entertain, and it had to be inside and not soft play.

Morning & Lunchtime: Our first stop was the British Motor Museum which boasts the largest collection of British historic cars in the world. We were in luck because it was half term they had a number of lego activities on.  The first lego activity we came across was helping to build a life size lego Mini with a Union Jack roof. Monkey put some sets of blue blocks together to help carefully following the instructions. 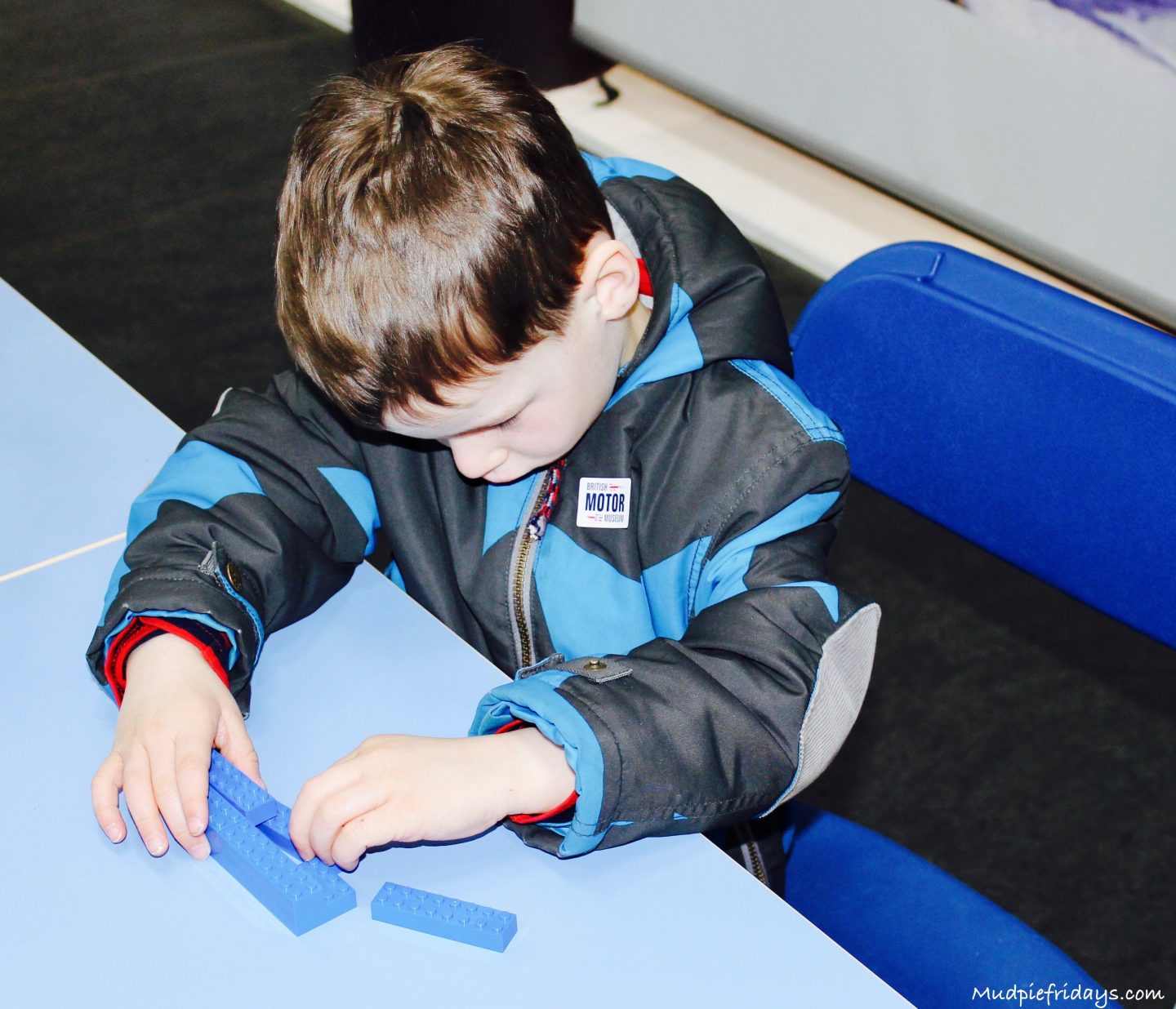 The second lego activity included building a car with a small number of bricks. Monkey chose the biggest tyres he could find and I am not really sure if he or Hubby had the most fun. I liked that they had some smaller kits for the younger visitors which were simpler and would have suited Monkey better if he had been doing it alone. At the end of each activity you collected a sticker for your certificate. I get the impression that they often host a lot of things for children to do and Kipper loved the Shaun the Sheep hats. 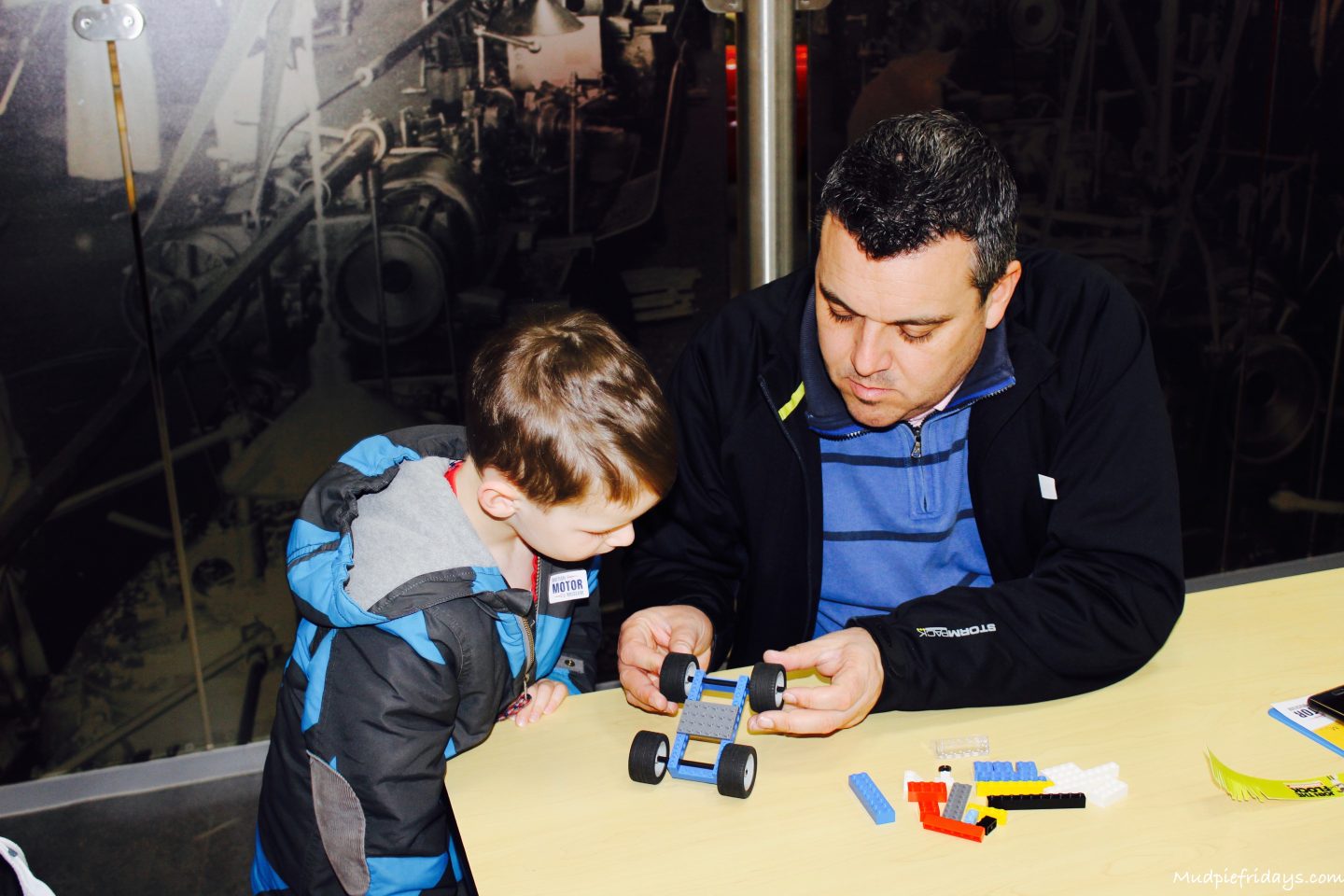 The third lego activity included a treasure hunt trail amongst the cars. They had a lot to look at, Monkey is not really at the age where he’s that interested. Although the old MG sawn in half was pretty interesting as it meant he could see how an engine was put together. They also had some well known vehicles from the movies such as Lady’s Peneople’s pink limousine and Back to the Future’s Delorium. Of course we had to get Monkey to pose, not that he really understood why he was posing! 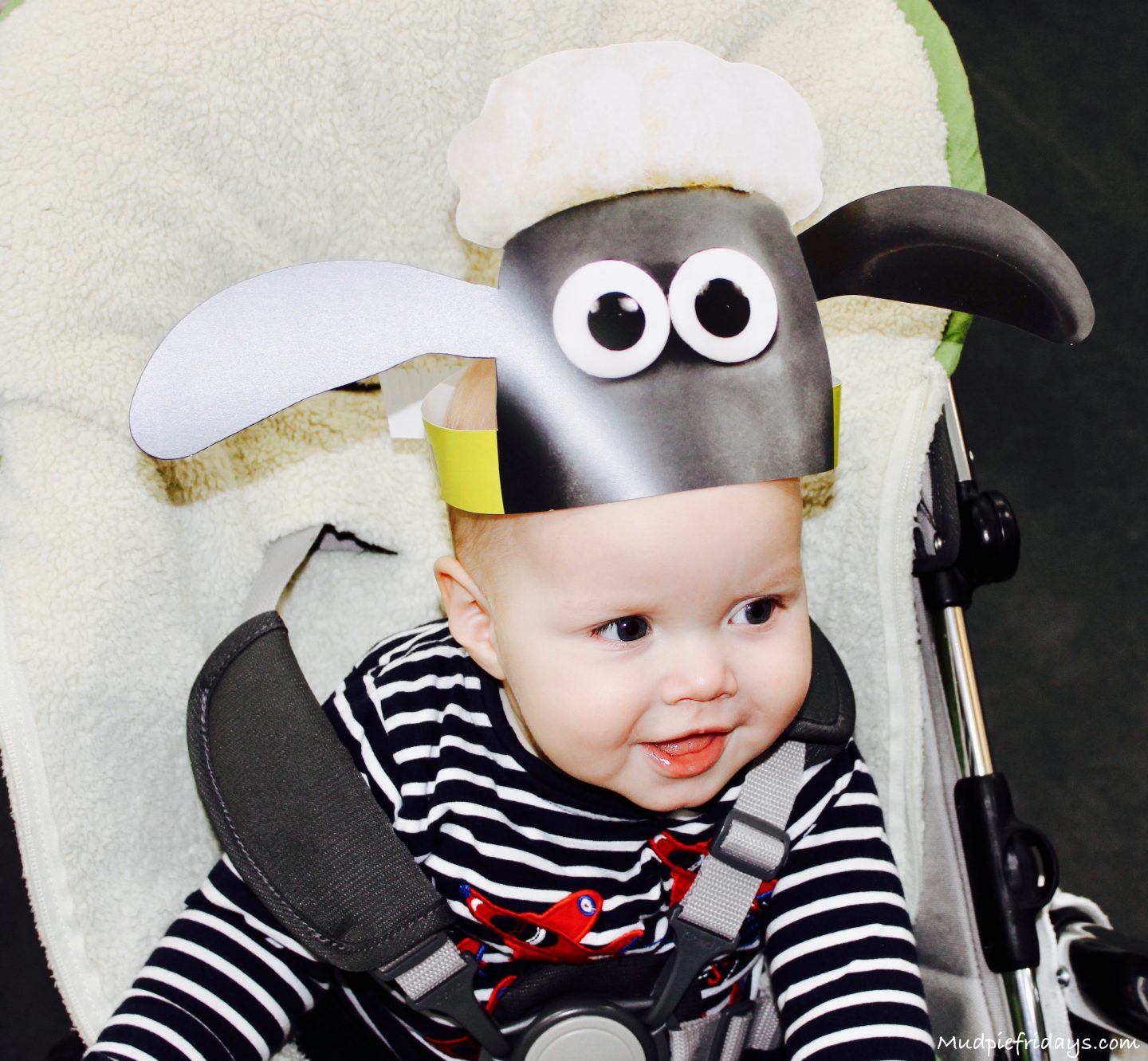 Upstairs there is a well priced cafe with plenty of seating where we decided to stop for lunch. They had a selection of cold options and hot lunches. A kids lunchbox and a salad came to just under £12. It was the perfect way to spend the morning.  It would probably have been better if Monkey was just that little bit older as we were lucky that they had the lego activities on. I also really liked that they had thought about their younger visitors not just with the activities but also with some push around cars. All the staff were really friendly and I would recommend a visit here. 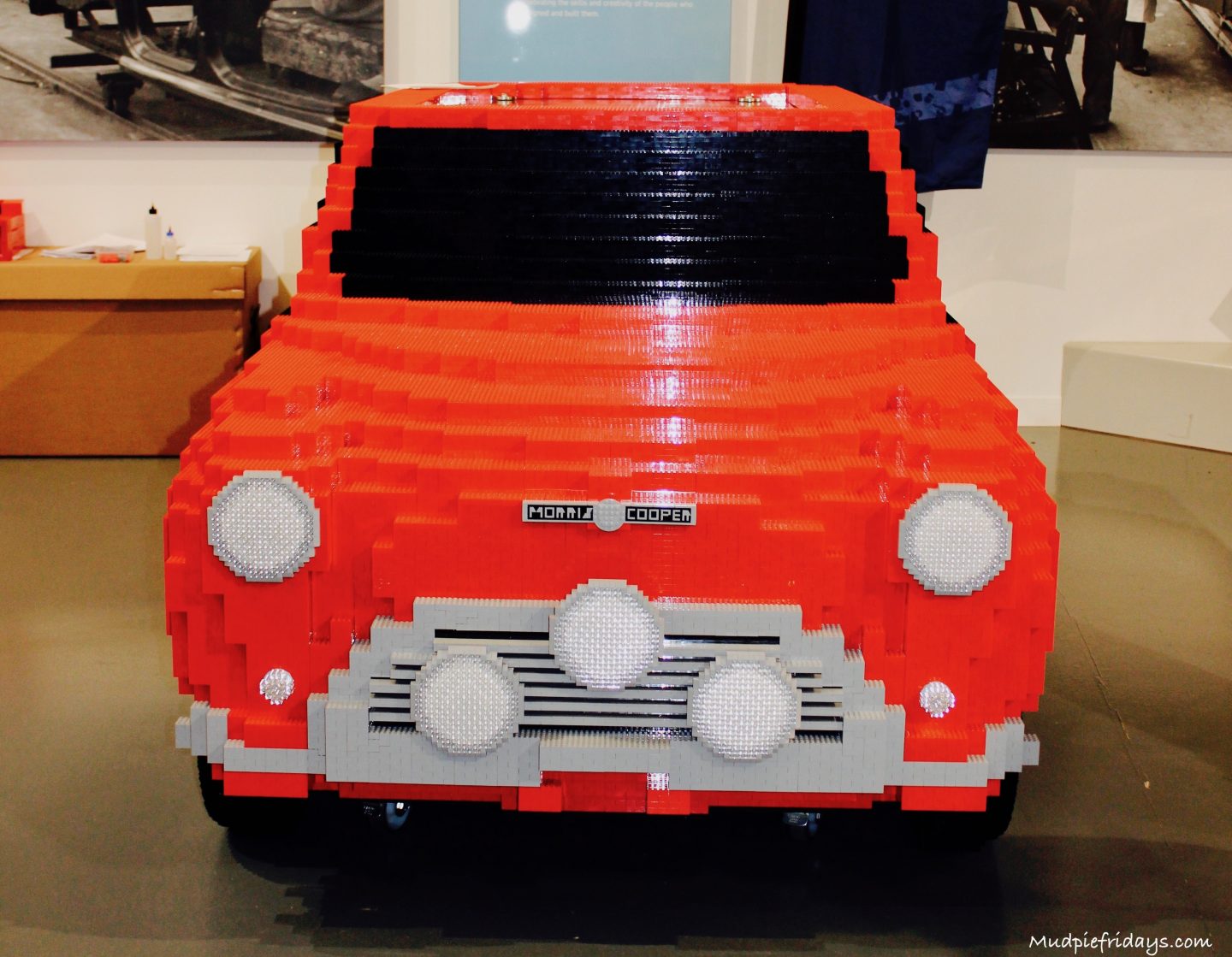 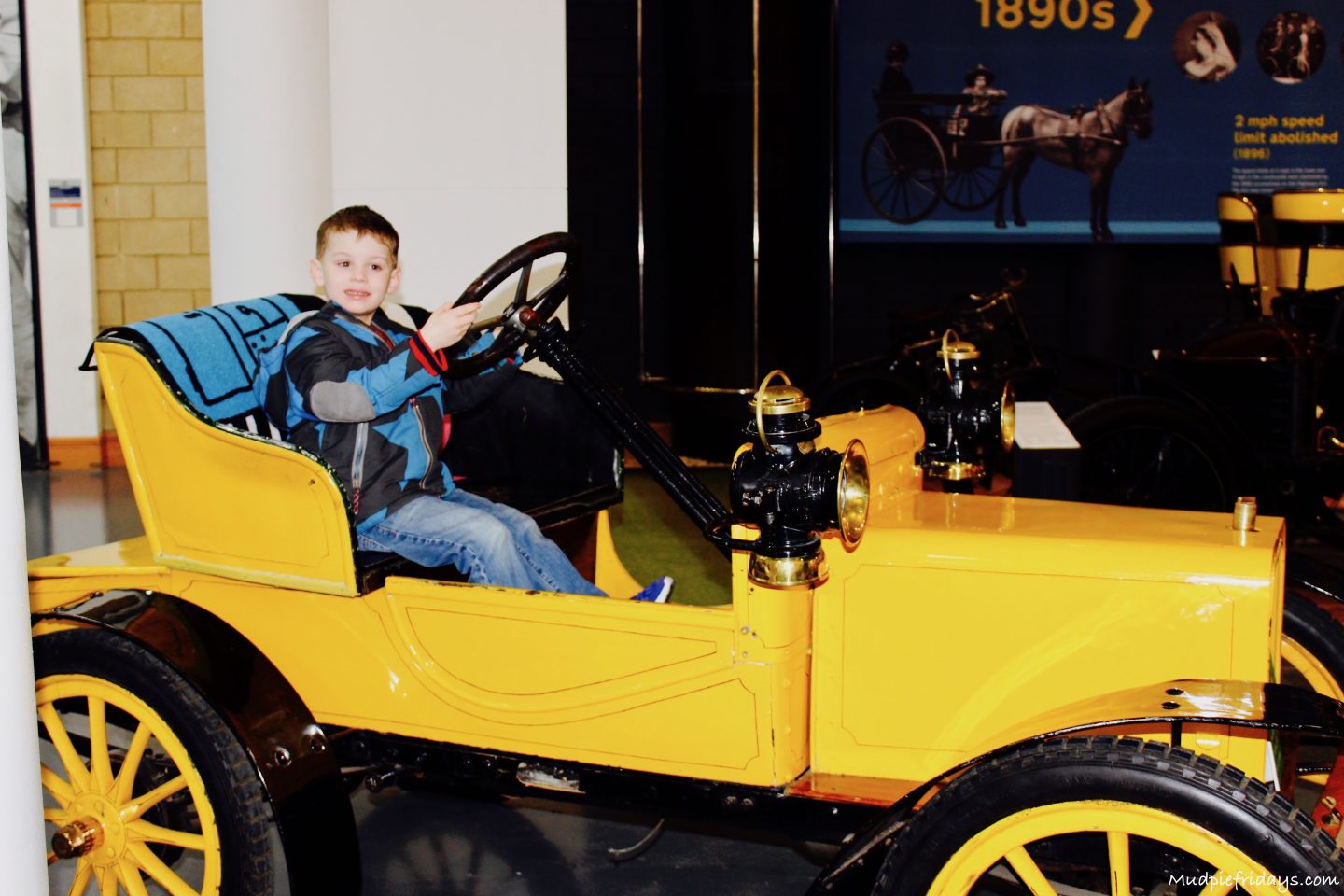 Afternoon: About a fifteen minute drive from the National Motor Museum is the Butterfly Farm located  right on the river at Stratford-Upon-Avon. There is a large carpark next to it and disabled parking on site. Its not particularly big, in fact you could probably walk around it in the 10 minutes if thats all you were doing, but we were there for just under an hour. Its the perfect way to spend some time when the weather is bad. They have a lot of species of butterfly under one roof, more than I have seen when we have visited Wisley Glasshouse. 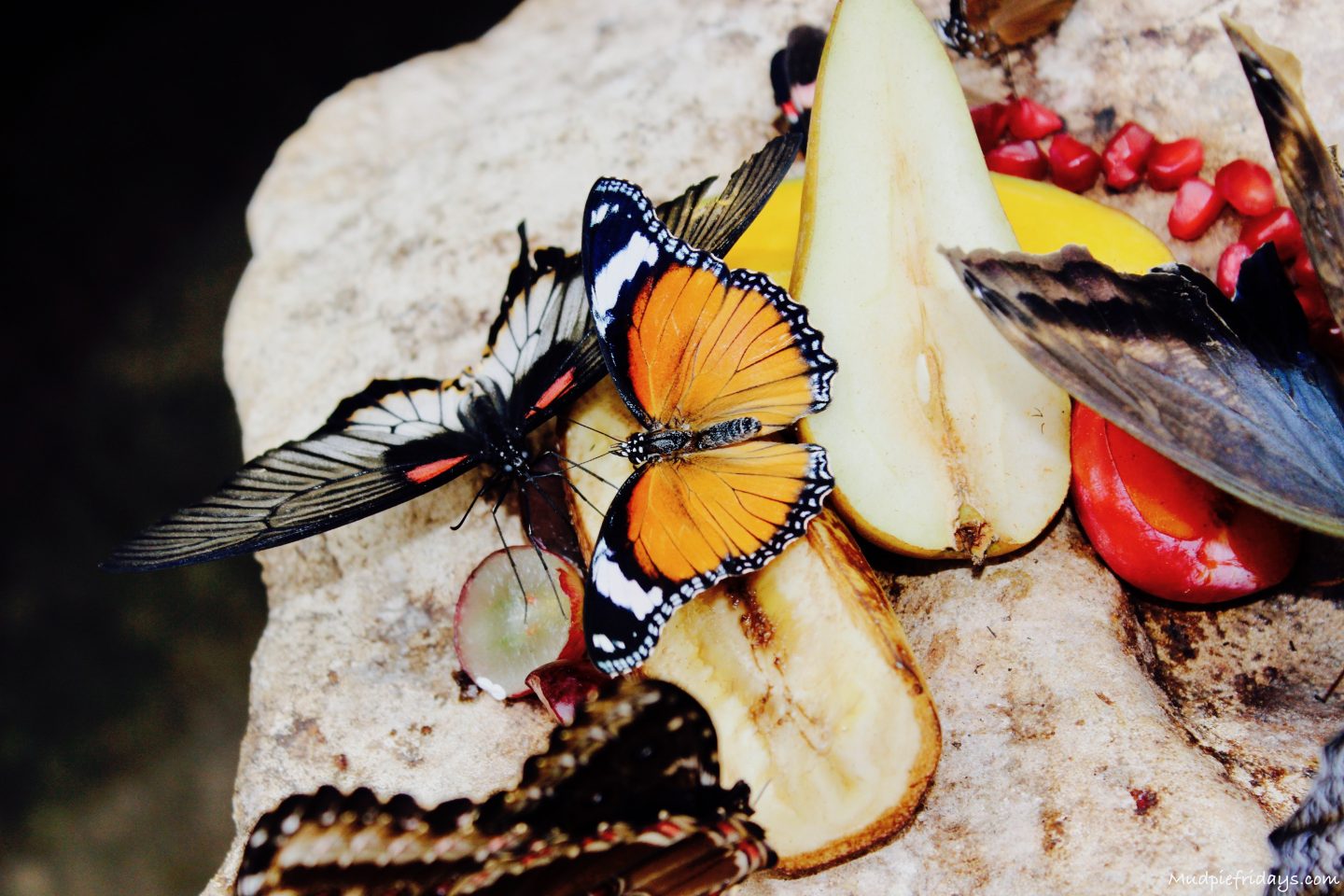 The food tables are placed in good positions to make sure all the little ones can see whats going on easily. We visited early afternoon so it could be that we caught feeding time, but there was a lot on food in each table which attracted a lot of different varieties and meant there was plenty of opportunity to view them. Saying that the butterflies also seemed a lot friendlier and they liked to land on people. Monkey was really excited by this and really wanted them to land on him. 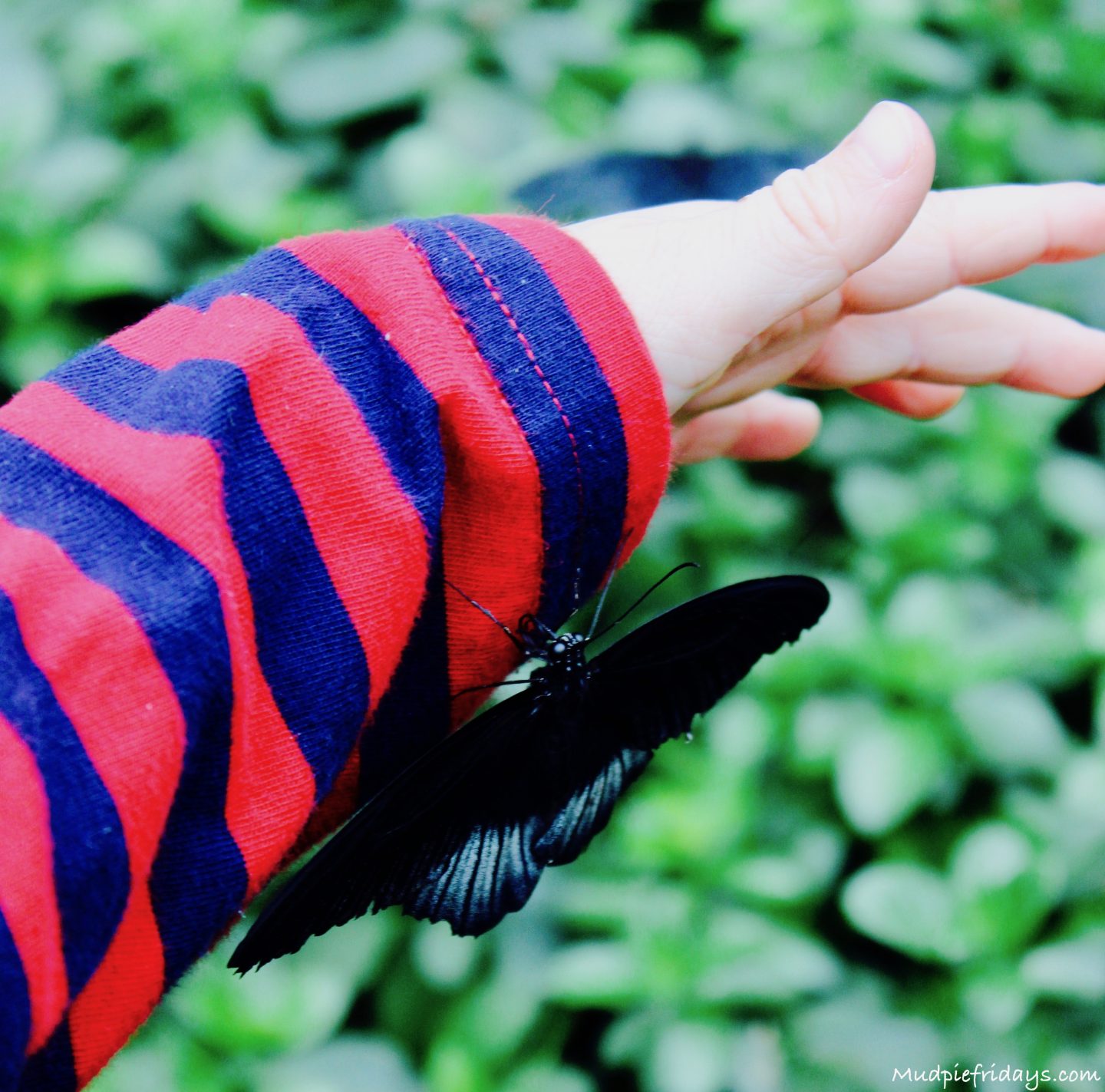 He didn’t have to wait long, this black species particularly liked his top. Monkey found the whole experience very exciting which is wonderful to watch. Although it was very busy because of the bad weather you didn’t feel as though it was too crowded. There is a buggy park in the entrance and somewhere to hang your coats which is a great idea as its pretty humid as you can imagine. Not having to to carry everyone’s coats meant our hands were free to take pictures and hold Kipper. 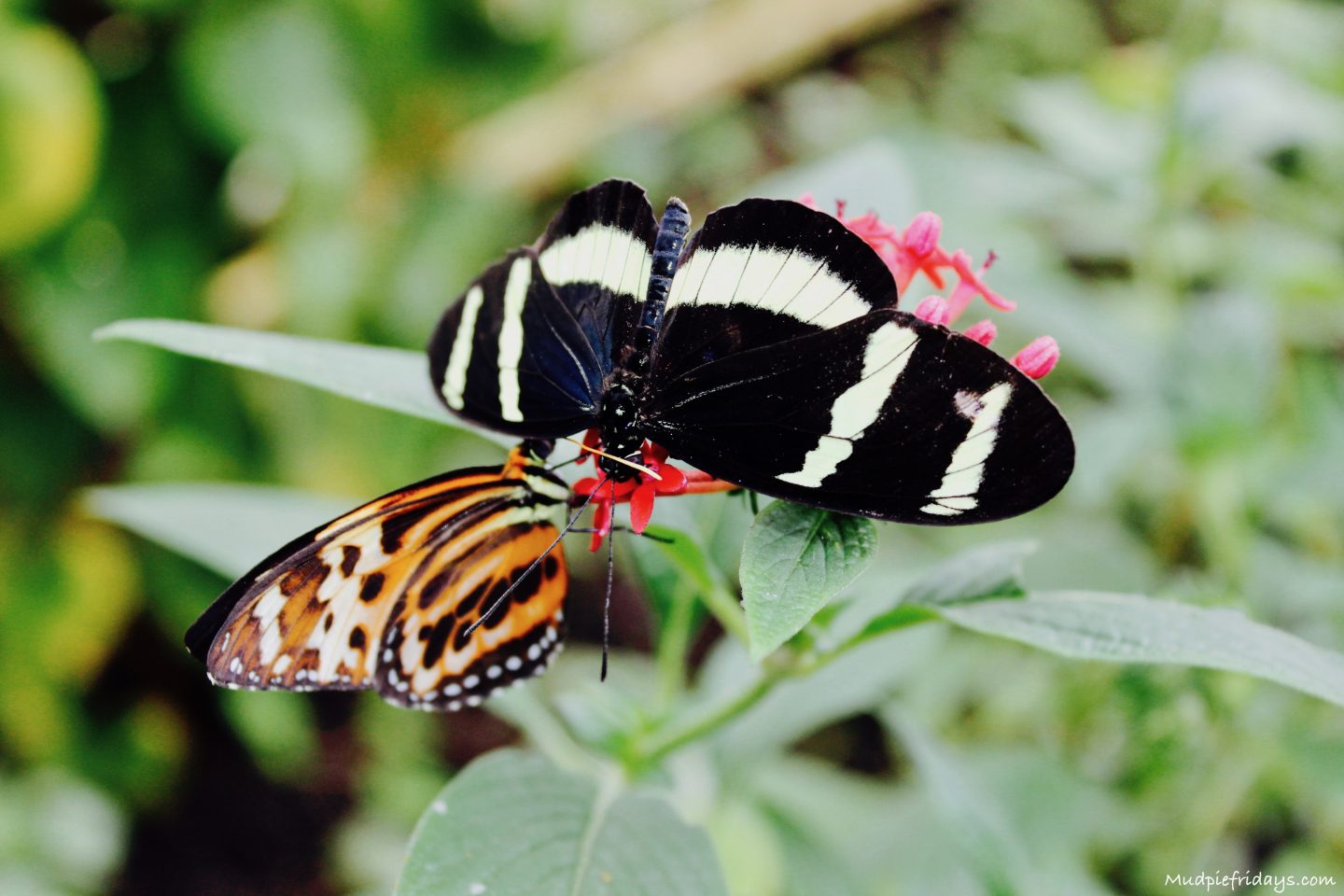 Saying that you can take buggies round if you want and although its uneven in places you would only struggle to get over the little bridge. In the centre there is a large pond and the paths go round the outside. Off to one side is a mini beasts area where they have just that as well as frogs, toads, snakes and lizards. The tanks are completely glass so its easy to spot their contents and at a good height, although I did need to pick Monkey up so he could see at some points. 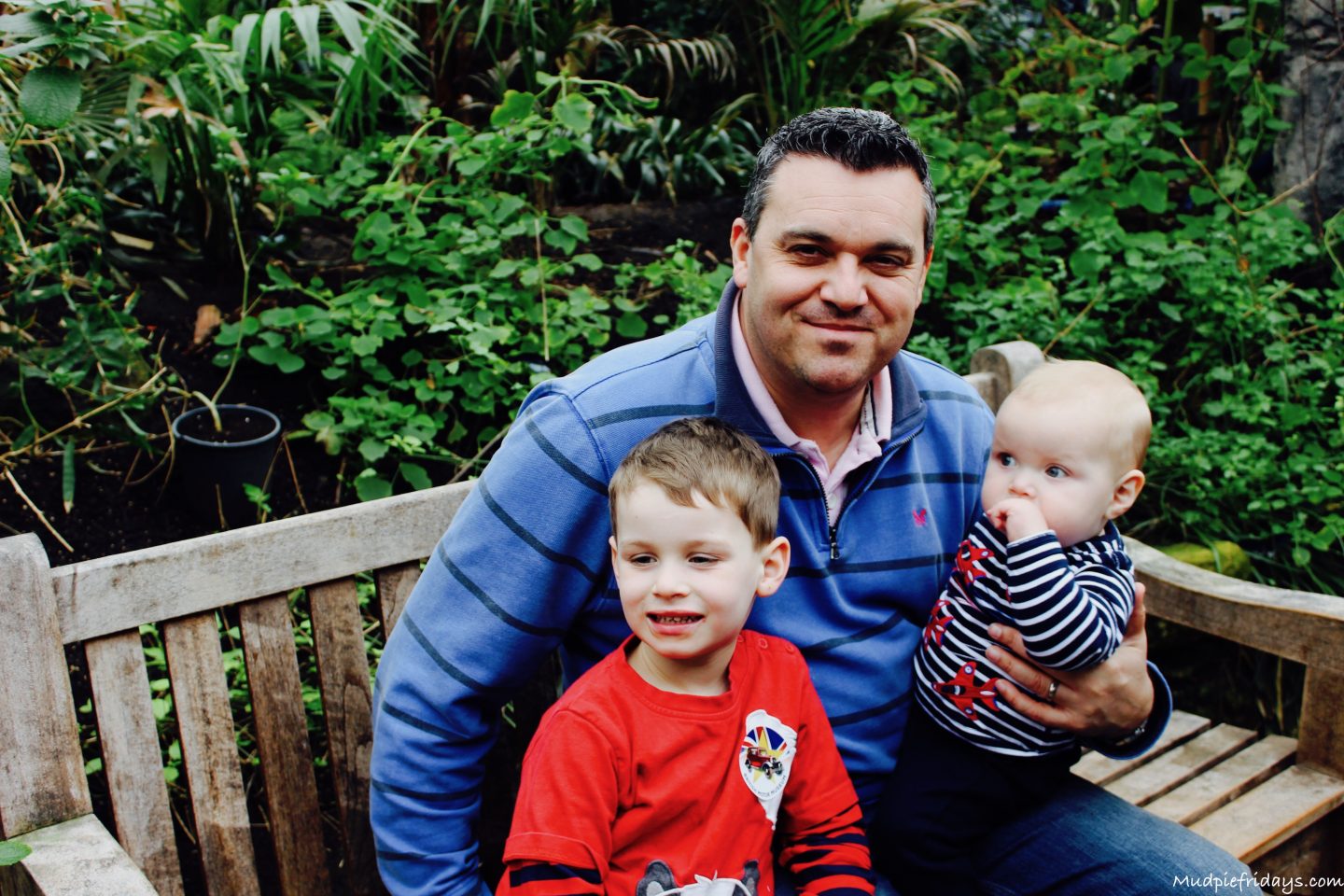 There is plenty of seating around should you wish to stop and take it all in. That wasn’t possible with our two but I can imagine its very relaxing watching the butterflies fly back and forth. I think Monkey’s favourite bit was where all the chrysalises were, as there was a number of moths and butterflies emerging when we visited. He stood for quite some time watching a tiger moth emerge, eve I found it fascinating as it wasn’t behind glass just hanging in a tree. And they really are the size of a small bird. I think the only thing the Butterfly Farm is missing is a little cafe, I would definitely look to visit again. In fact Hubby and I are thinking we may go to Stratford for a weekend away without the kiddies so this will be on our list. 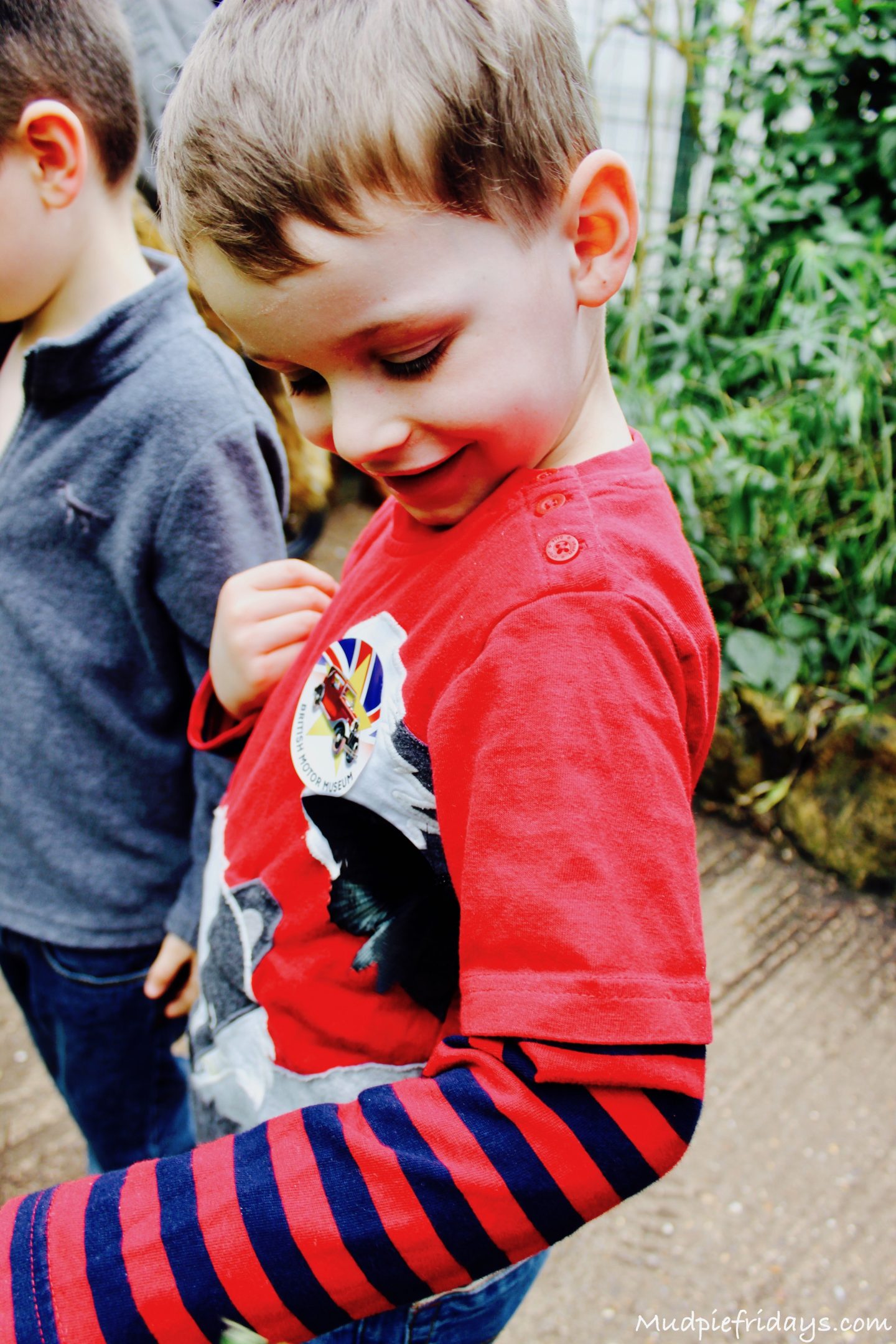 Early Evening: When we came out the weather looked like it has improved a little and Monkey had requested ice cream. Having picked up a map of Stratford in the Butterfly Farm we decided to head into the centre walking along the river first and then past the theatre. Here Monkey met Shakespeare although it took a little bit of explaining who he was. I get the impression that the centre itself is quite small although as we started to explore the rain came down again so we jumped into Hoorays. 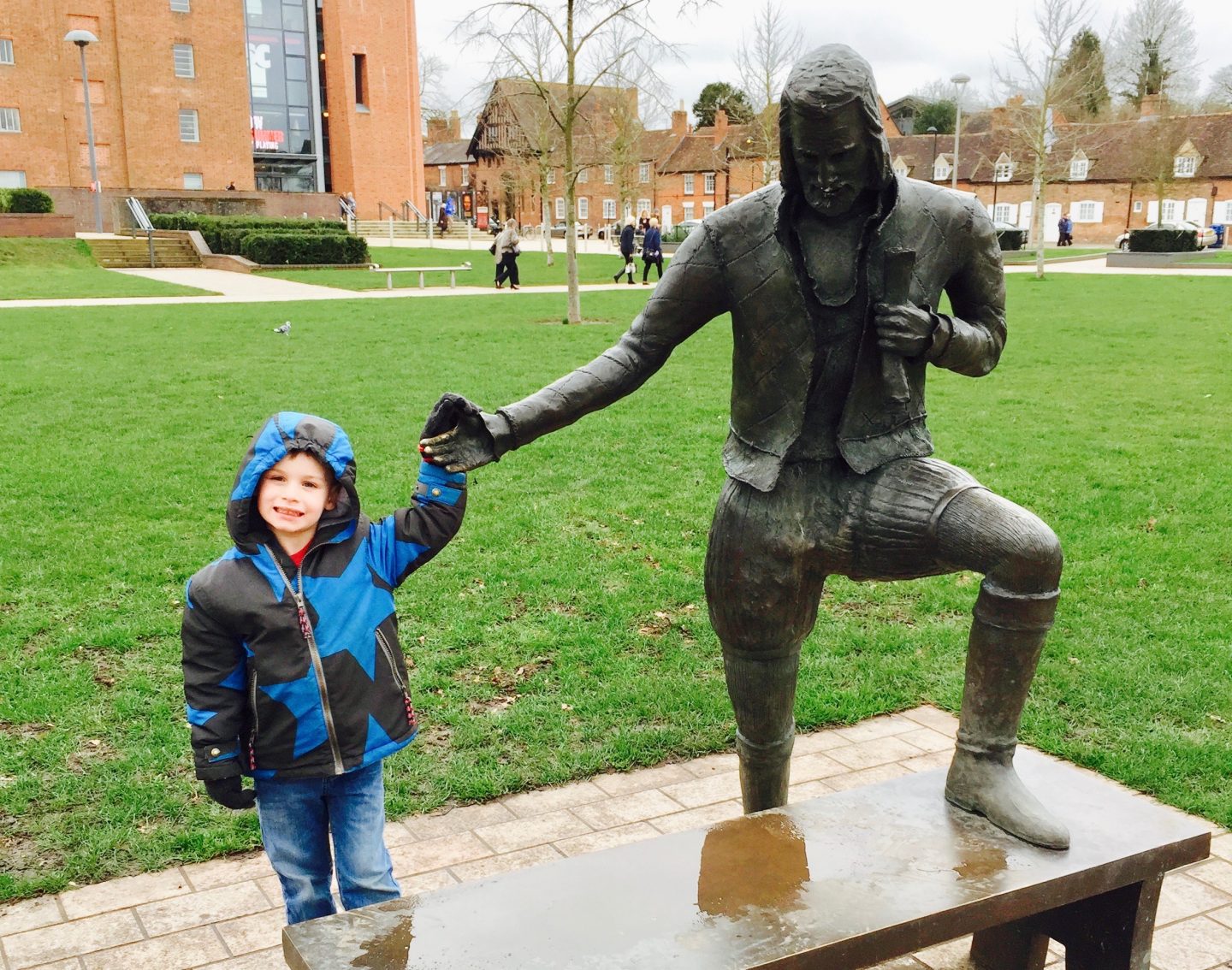 Which is a British Gelato Kitchen and very popular, luckily we managed to bag a table just as someone was leaving, as although there is an upstairs we had no way of getting the buggy up there. We sat and watched the world go by and the rain come down, and although it was very busy with people coming and going it was also very relaxing. The menu is extensive and the waffles looked amazing. However as we had already booked a table back at the hotel for dinner we opted just for some cones. I love that they do mini portions so Monkey thought he was getting the same as us!

We decided not to explore anymore and head back to the car as soon as the rain stopped. Even though it was a bit of a washout we still had a great time. I would like to thank Mary at Over 40 and Mum to One and  Jaki over at Jaki Jellz for the recommendations, without you both our weekend would have been very different. Thank you. We will definitely be back to visit both to Warwick and Stratford Upon Avon hopefully when the weather is a little more favourable! 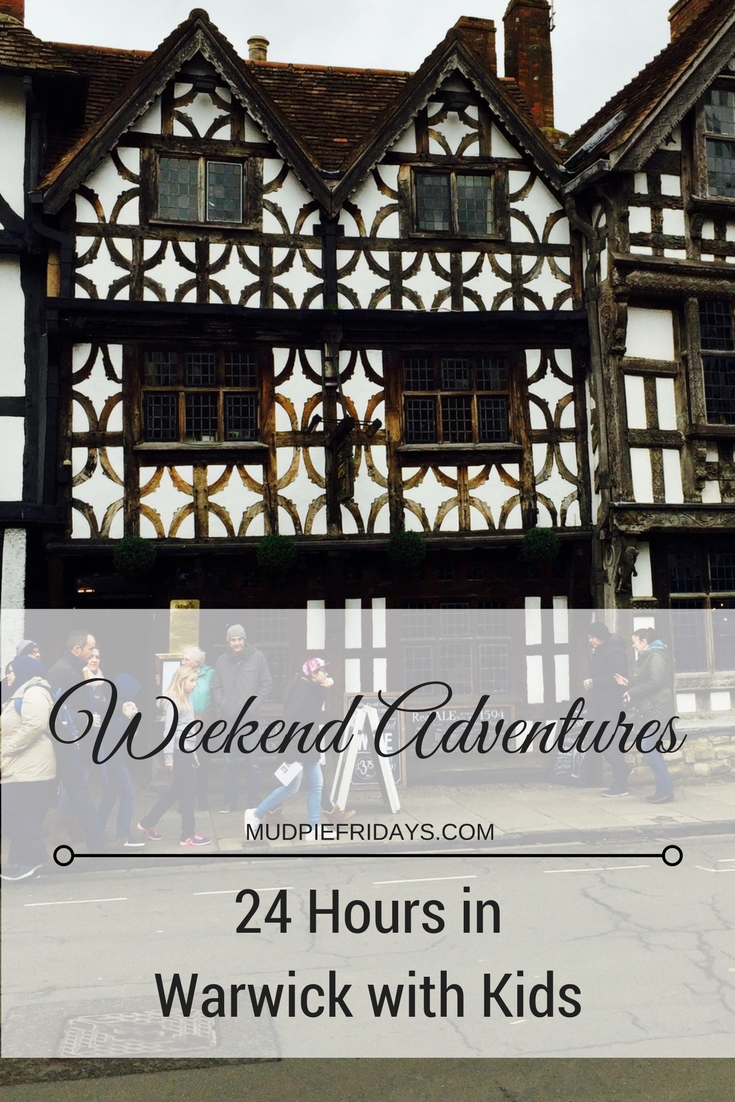 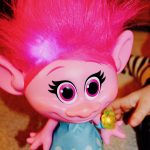