You will know that Birthday parties are a big deal with us so when Monkey asked if he could have a Superhero Birthday Party for his 5th Birthday I wanted to make it extra special. It would be the first one that he would get to invite his new school friends to which also meant I was going to do things slightly different this time round. Normally we hold birthday parities in our garden, being Summer born has given us a better chance to managing the weather. Yet the thought of thirty, five year olds tearing round made me decide on a hall. Im glad it did as when Batman made an appearance and proceed to chase them all around it was like a herd of small elephants. 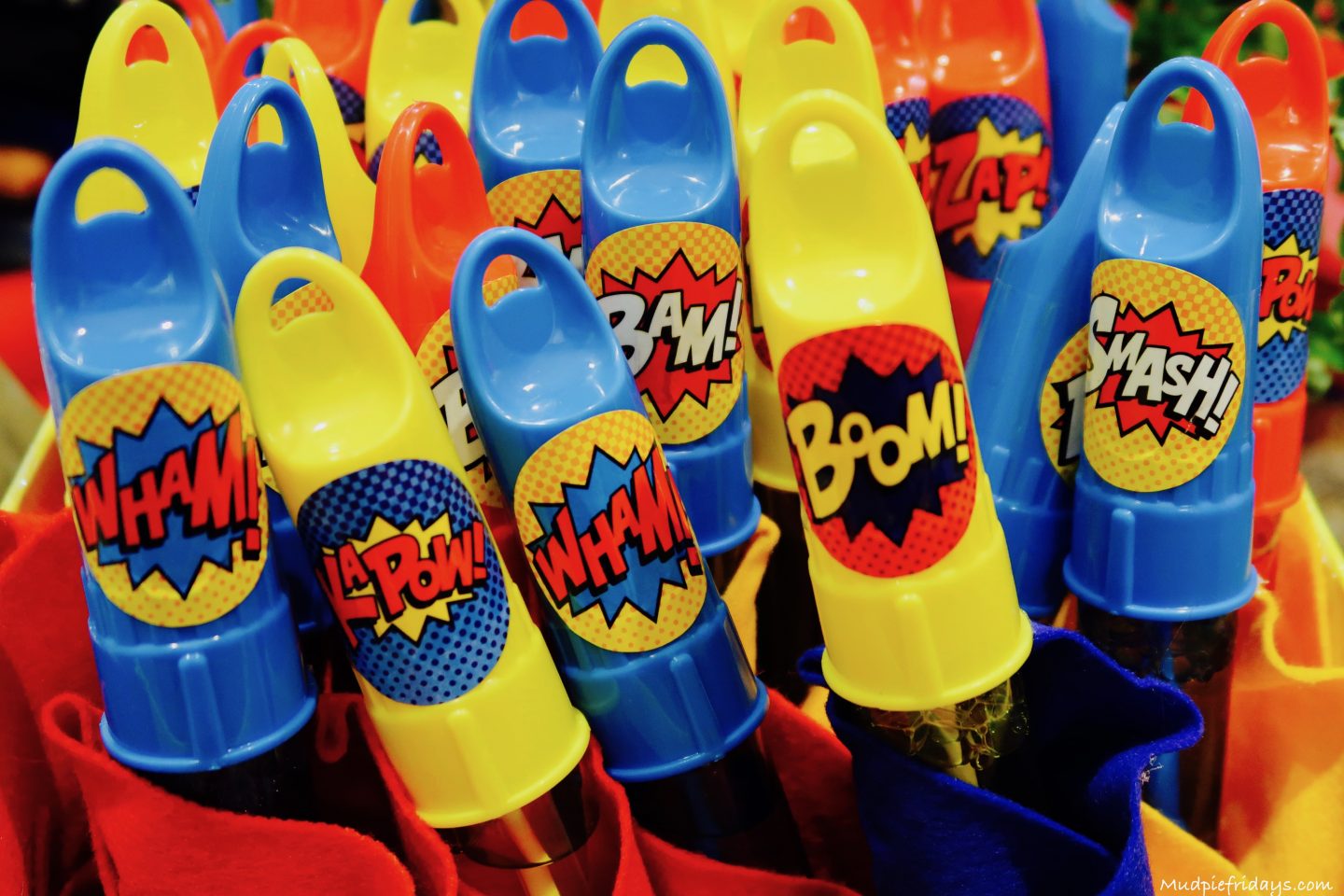 That was the other big change, we have never use a party entertainer. I have always run the parties myself. Yet I seriously doubted my ability to maintain order with that many children, so decided to pay an expert. We hired a Superhero entertainer that was friends with Captain America, Batman and Spiderman. For two hours the kids were entertained with party games including a superhero assault course which Monkey loved. Each game helped them develop a special superhero ‘power’. It was really well thought through and really made Monkey’s party and took a lot of stress away from me. 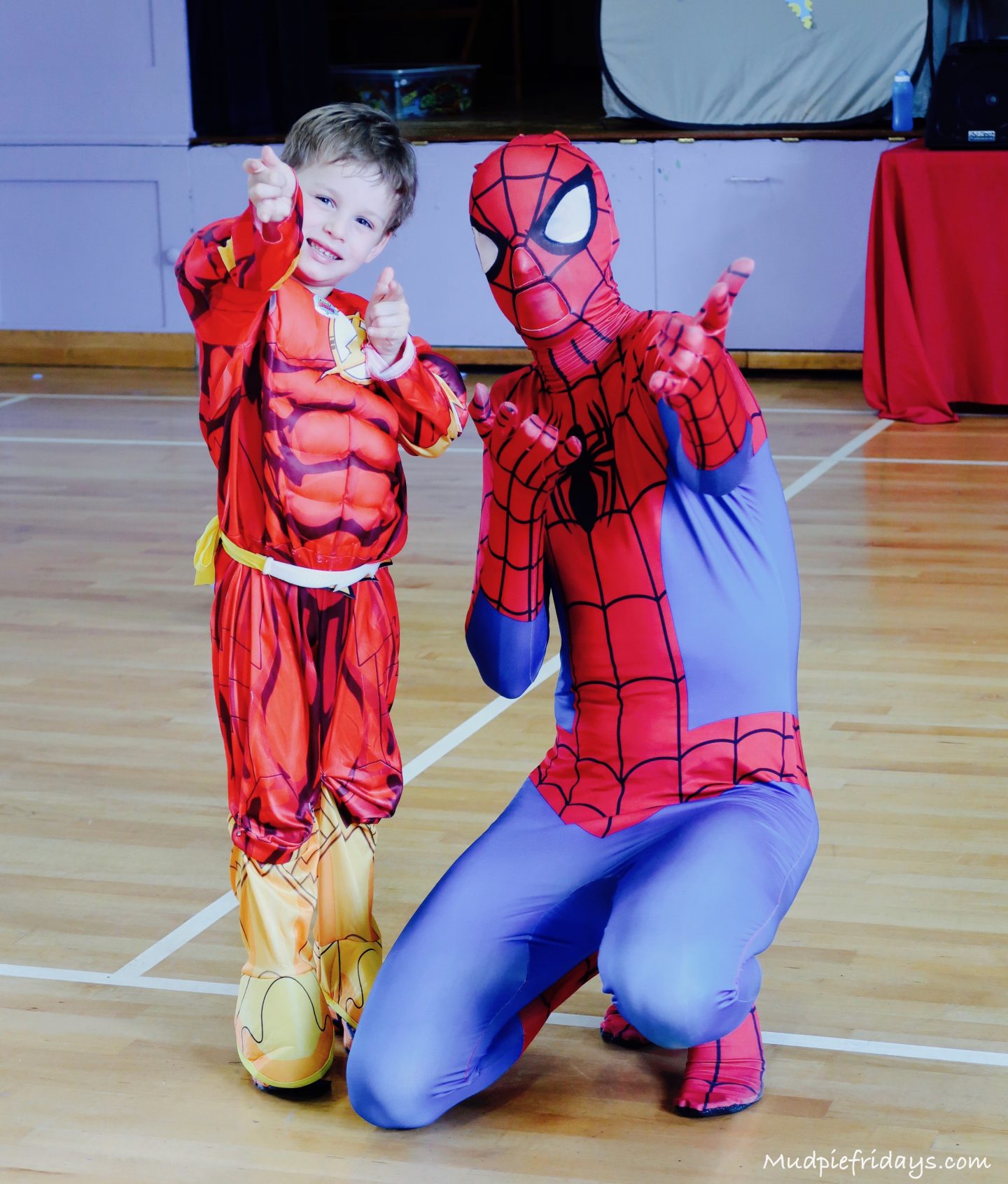 Food was always going to be easy as we had already decided to have simple party food with coffee and biscuits for the parents. Yet I wanted the cake to be the centre piece of the table. Looking on Pinterest I fell in love with a number of different designs. I realised quickly that if it was going to look like the picture that was quickly forming in my head I wouldn’t be the one decorating it. As with Kippers Peter Rabbit themed party I decided to use a cake maker who knew what they were doing, Since Sugared Pumpkin had done such a great job I opted to use her again.  Not only are her prices reasonable the cake itself was everything I hoped it would be and more. It also tasted really delicious we opted for vanilla, lemon and chocolate. On the top there was a sugared superhero power flash with Monkey’s name in it. I have kept it and will be framing it to use on the door to his bedroom. 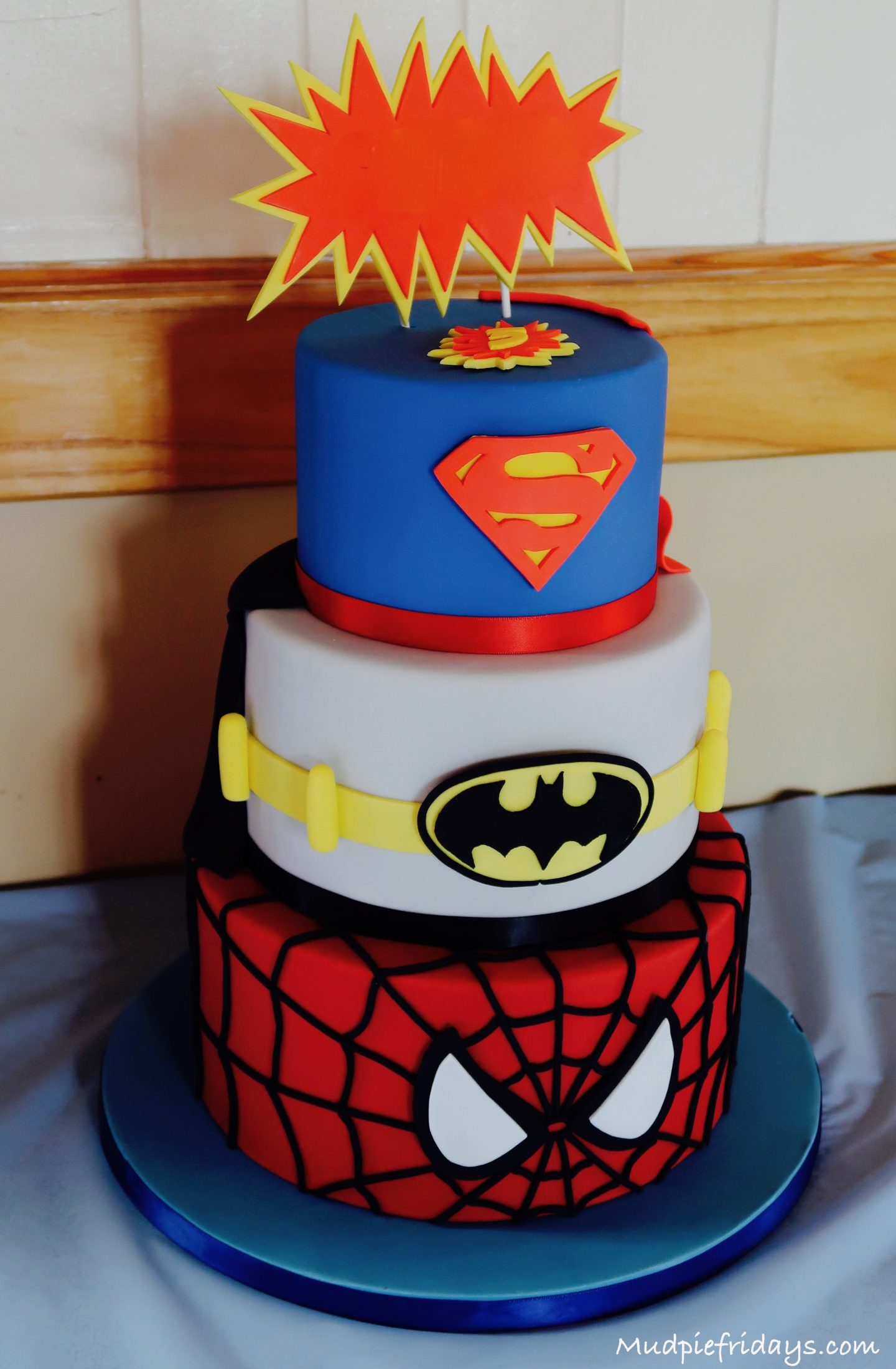 Monkey already had a couple of the superhero outfits but he asked specifically for Flash. Which is not one I have seen in the supermarkets. Thankfully I managed to find his size on Amazon which worked well since none of the other children came dressed as the same. Kipper already had a batman babygrow which he has been given by his aunty which worked well since it was footless and so limited the chances of him slipping over as he started to toddle. 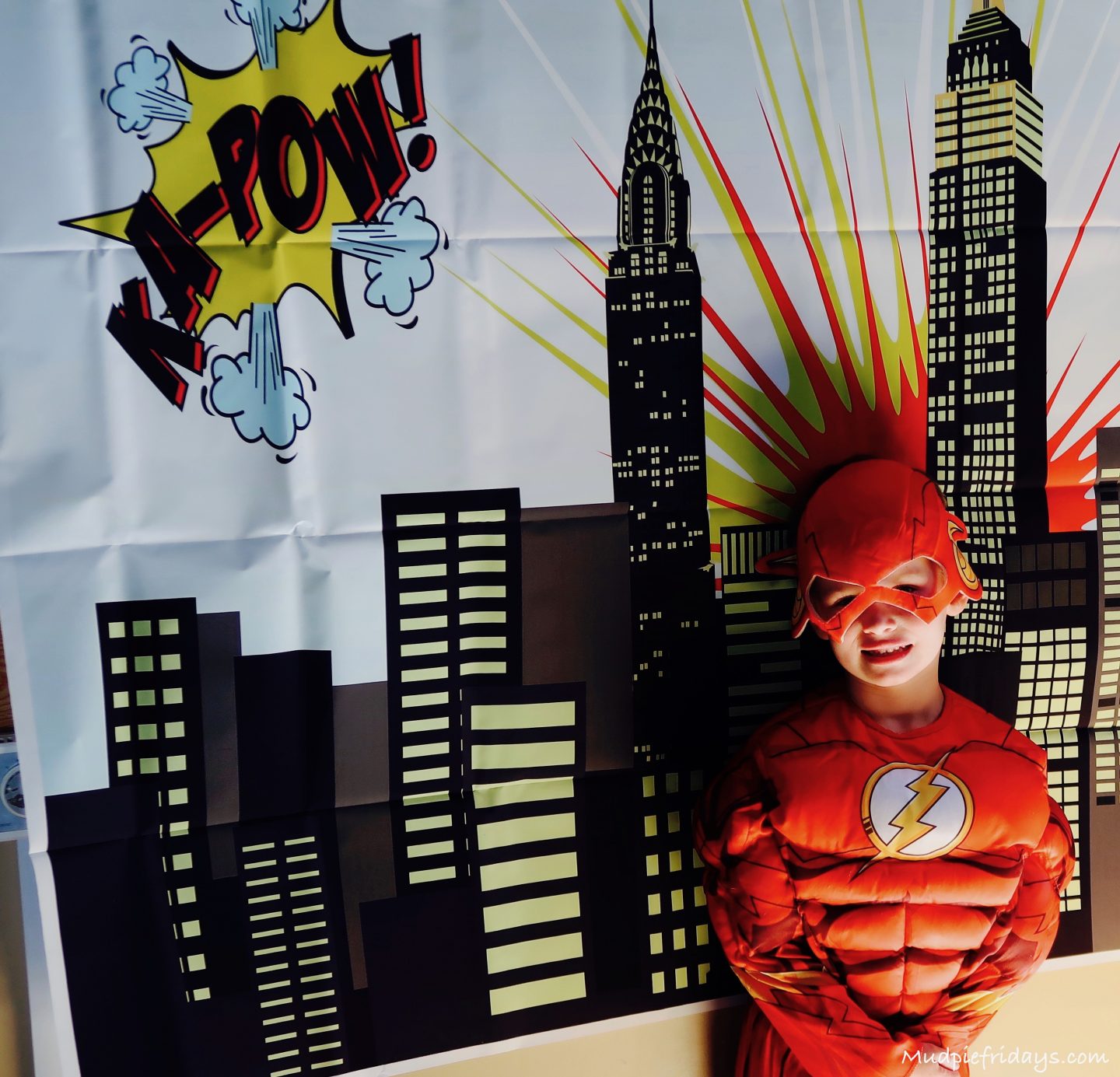 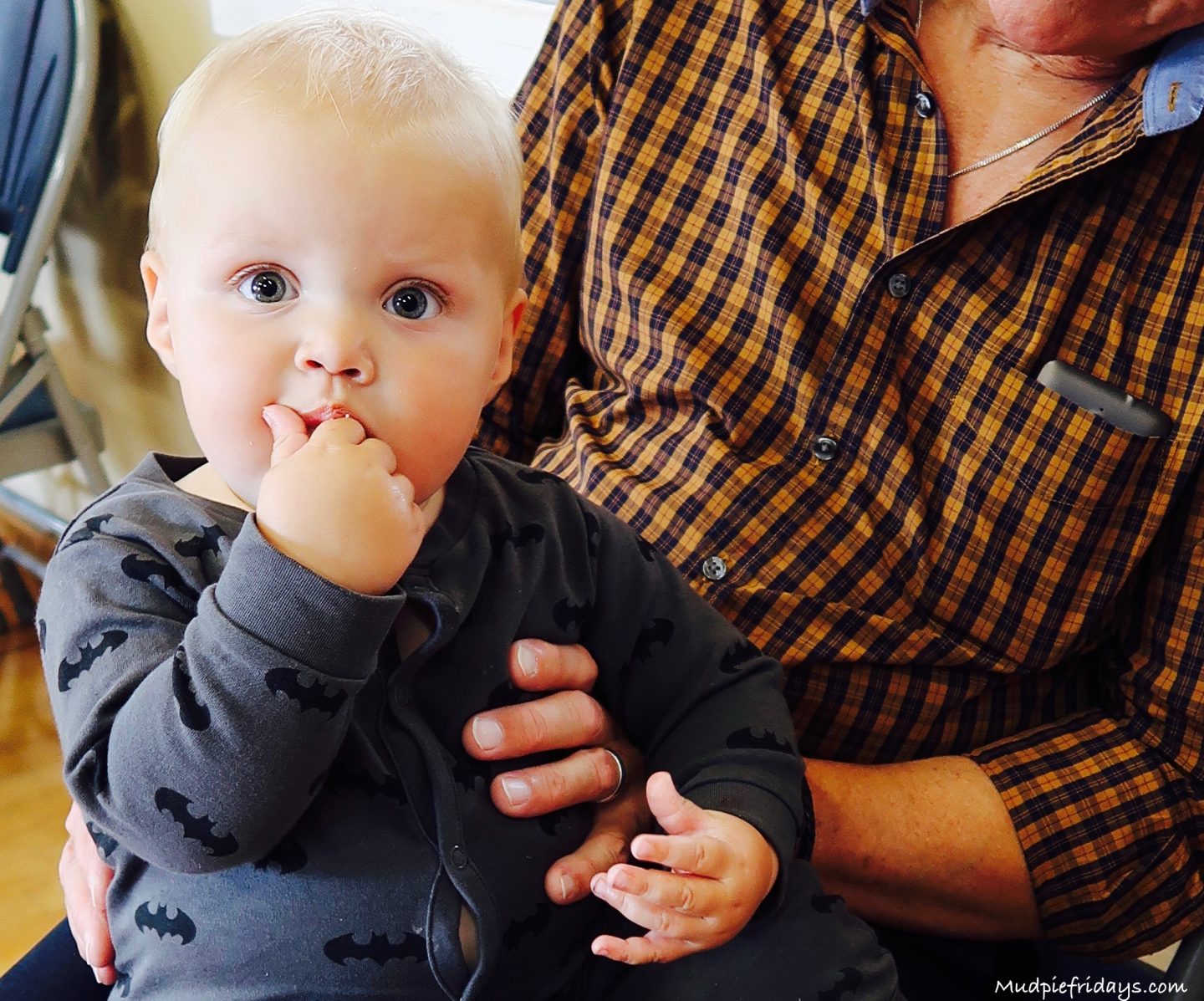 I didn’t want to go down a specific Superhero route because Monkey hadn’t  expressed a favourite so when I came across the pop art superhero range it seemed to fit the bill perfectly. Rather than individual table cloths I brought a table role which worked out considerably cheaper and will last for a good couple of parties. 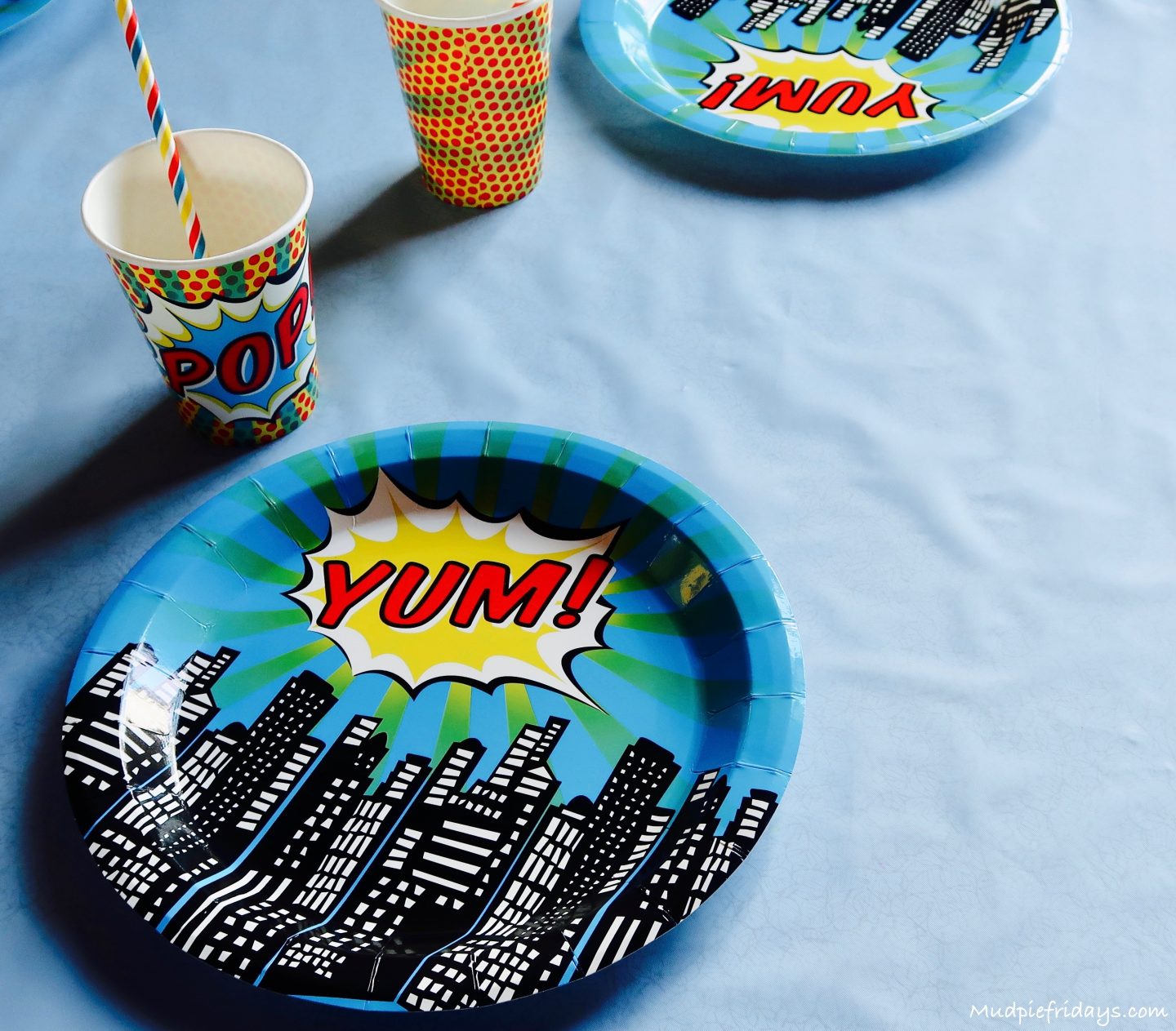 With regards to decorations since we hadn’t used the hall before I wasn’t sure what change there would be to decorate. We had already brought some superhero balloons but I quite liked some paper fans in the pop art theme. They weren’t very cheap so I decided to make our own. Buying really cheap tissue paper fans off of eBay and then printing out some superhero pop art onto photo paper. To attach the cut outs to the fans I used silicone glue. As it meant I didn’t need to apply to much pressure and squash the fan. I think they worked really well. 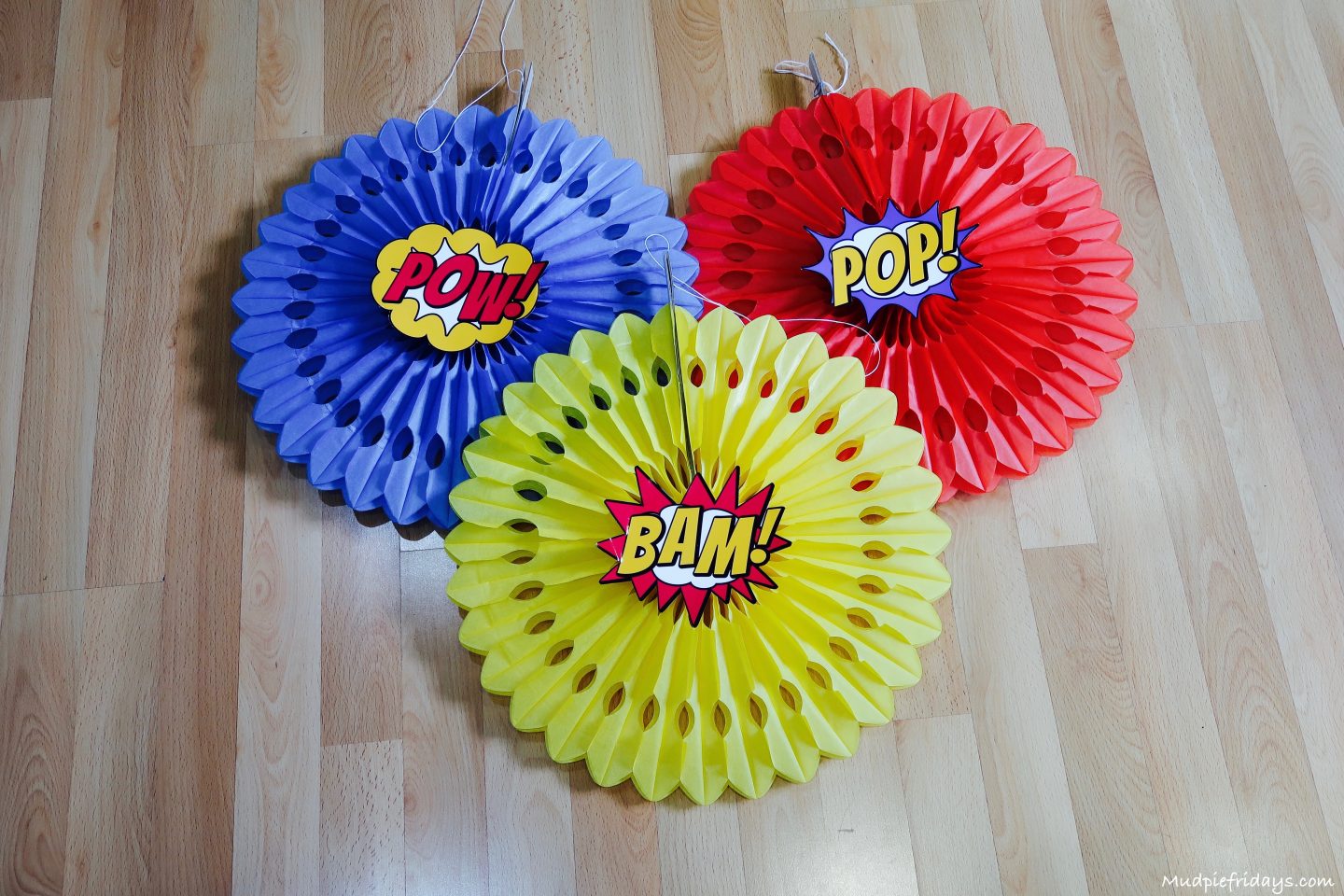 I had also purchased a photo backdrop from Amazon which I had intended on setting up with the DSLR and tripod so we could get pictures of all the kids. Unfortunately there wasn’t really anywhere in the hall to allow us to do it which wouldn’t interfere with the main entertainment. So in the end I put it up behind the tables and managed to get a couple of snaps of Monkey.

I am not a lover of party bags, but kids love them even if the parents don’t. So I tried to reach a happy compromise with sweetie cones and bubbles. The lovely people at Swizzles had sent us some sweets for all the children which I had bagged up into cones and added a Superhero sticker. 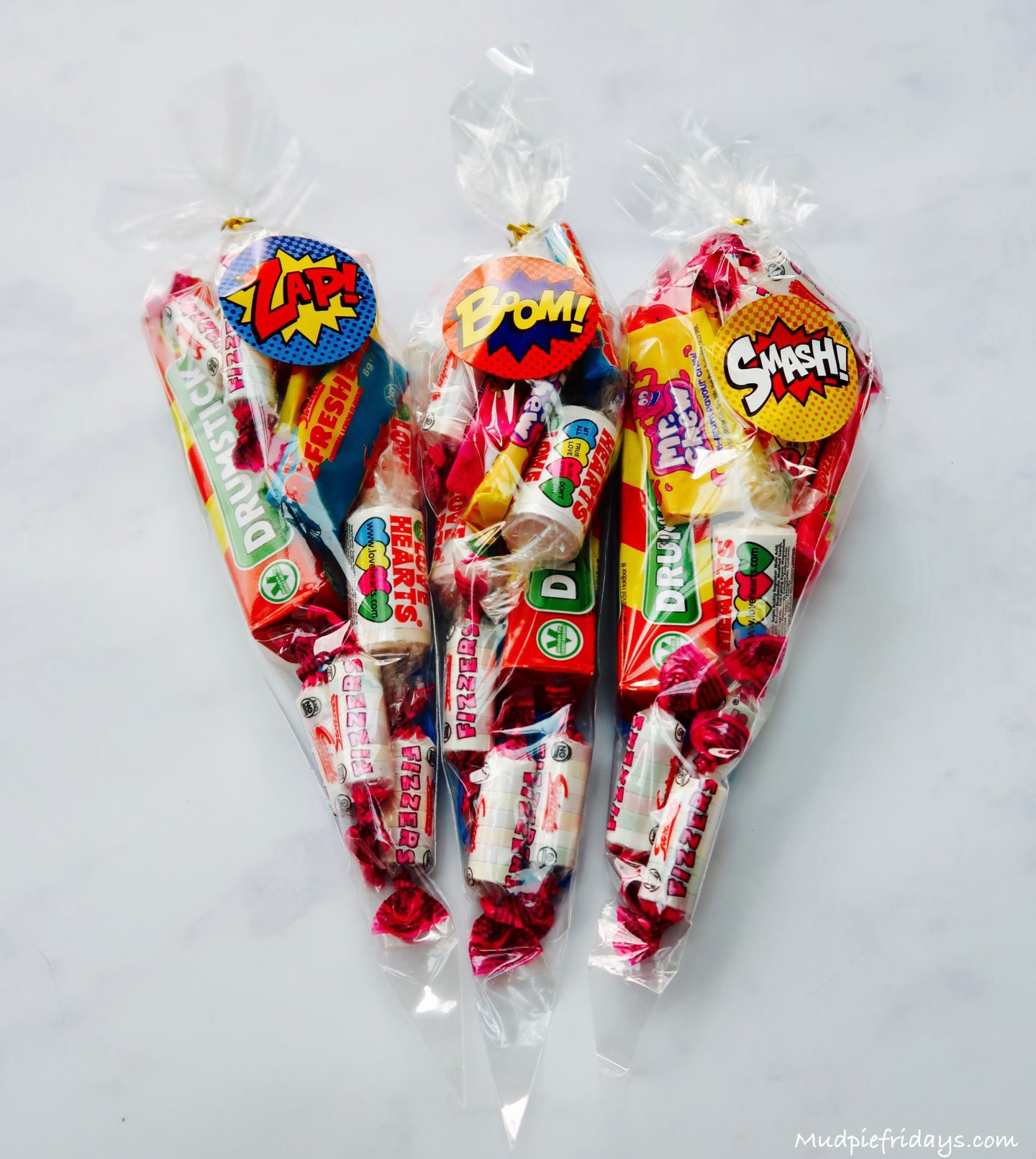 To make the Superhero bubbles I used the same stickers (although needed to be secured with sellotape) on the top of the bubble wands. Cutting triangles of felt I used a glue gun to stick these to the back of each one. You do need to be careful that the glue is not hot enough to melt the plastic. 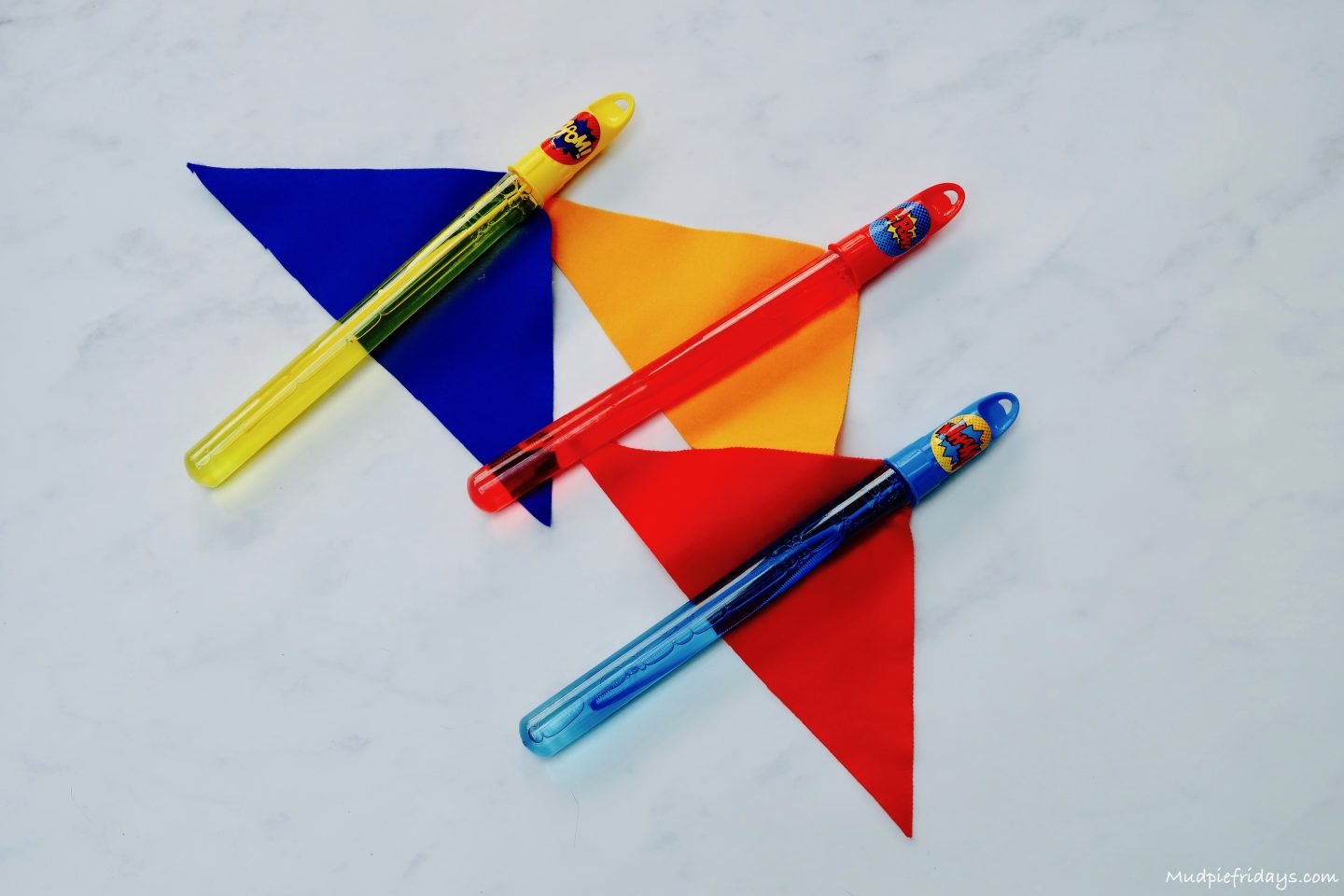 I suspected that a number of younger siblings may also make an appearance. With this in mind I set up a couple of activities to the side of the hall. We had some superhero tattoos and make your own masks. This was really straightforward and included felt masks and foam star stickers. It wasn’t too messy so even the youngest of of the siblings could get involved.
So there we have it, Monkey is now five!  If you are thinking of holding your own Superhero inspired party then check out my Pinterest board below:
https://www.pinterest.co.uk/mudpiefridays/superhero-party-ideas/ 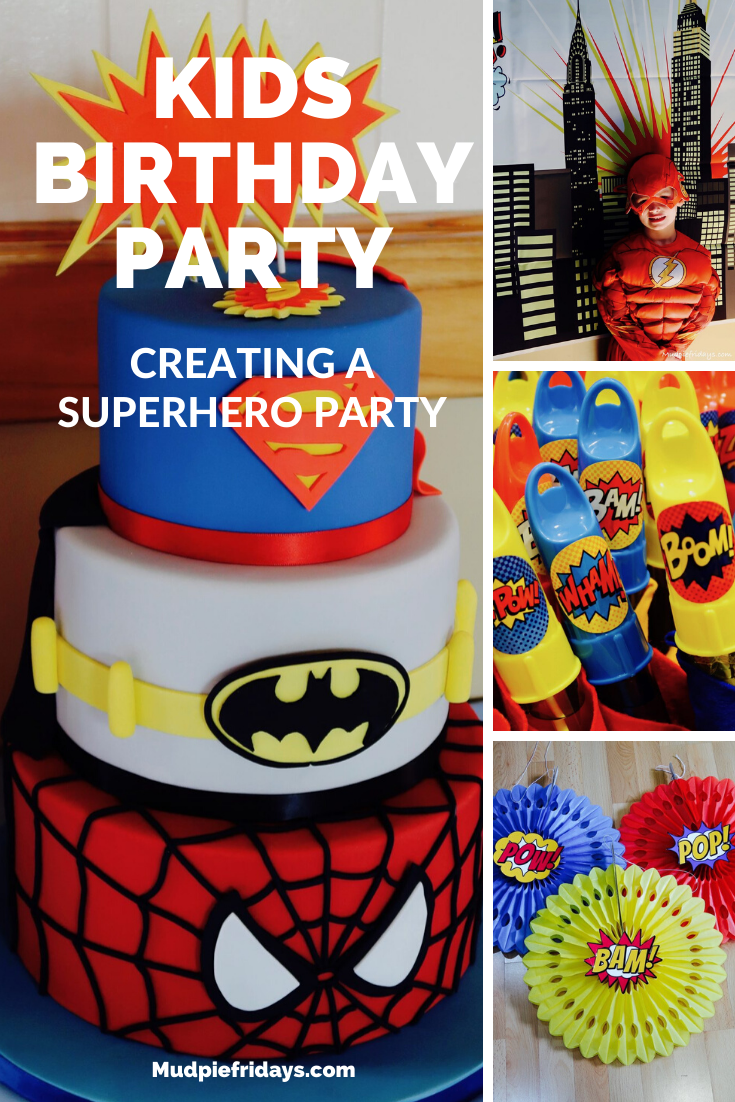 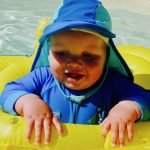