Top 10 things to do in Barcelona with young kids: During the first half of the Easter holidays I decided to do something spontaneous with Monkey. My wanderlust was kicking in and I had the idea in my head that at almost six he was old enough to experience his first city break. Once it was all booked I did have a monetary wobble… its been a long time since I have travelled alone. Plus I was responsible for a child, 100%. Anyway determined to prove to myself that I could do it we left Gatwick early on the Tuesday morning excited by what awaited us. Needless to say we had a brilliant time and squeezed so much into our little three day adventure.

Open Top Bus – There are a couple of different bus companies operating in the city. When we visited we opted for City Tours which I booked online before we left. I booked for two consecutive days which would cover the majority of the time we were there. Booking on line saved me around 10%. A child and an adult ticket came to 54€. Although its not cheap it gave me the confidence that if he got too tired we could always jump on bus. Plus it meant I didn’t need to navigate the metro. 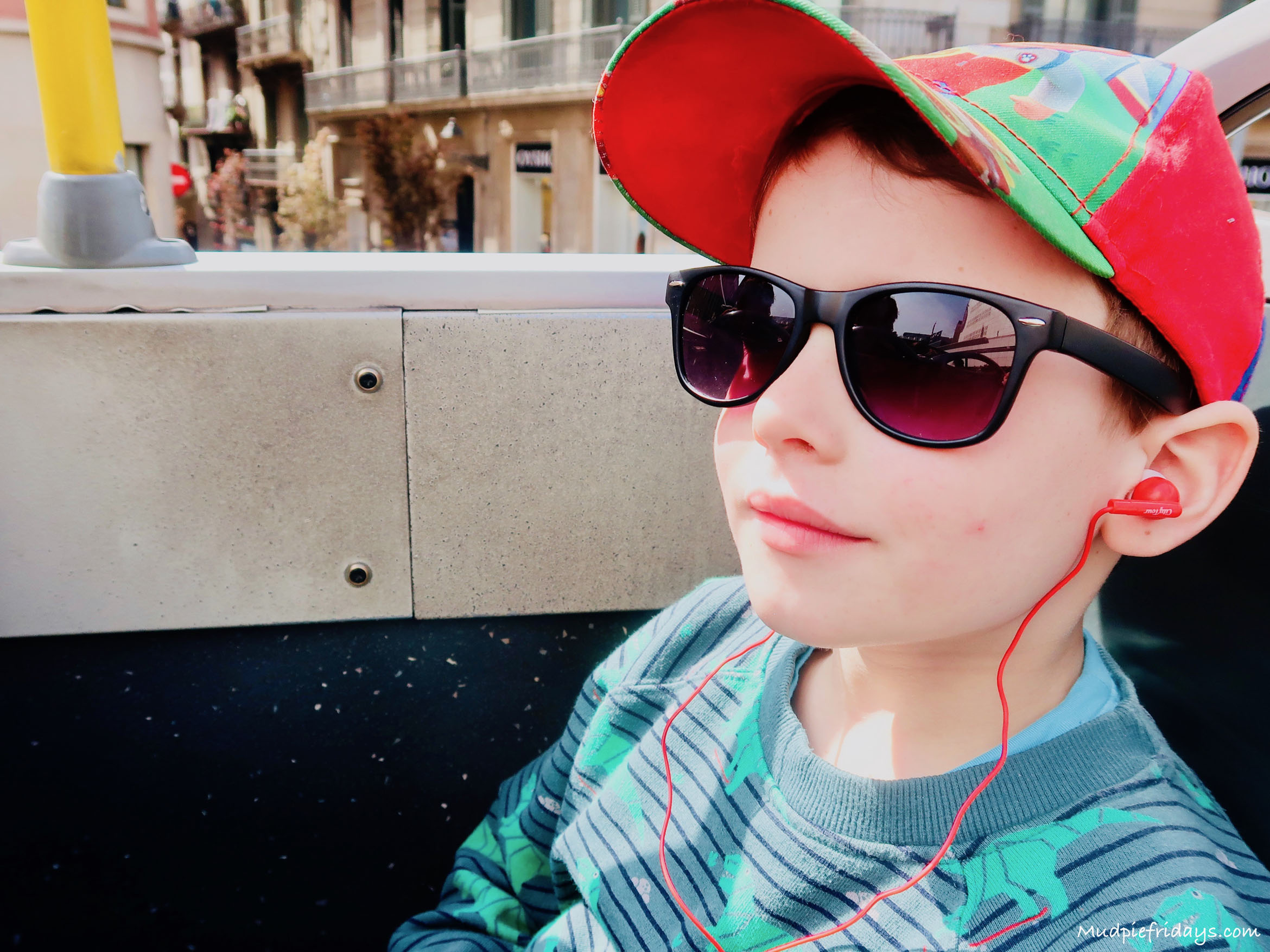 City Tours have a green and an orange route which covers all the main attractions. Each route is about 2 hours – 2 hours 20 mins. We did one route the day we arrived only jumping off to see Park Gruell. This worked well as Monkey was tired by the early start and travelling. The Orange route we picked up on the afternoon of our second day. Although we didn’t see any of the attractions in detail it was perfect for his age group. He really enjoyed listening to the head phones and hearing all about the monuments we were passing.

Aquarium – We pre booked our tickets online which meant we avoided the very long queues to get in. I think its probably the best aquarium we have been to. The majority of the tanks are large and high which means that even when its busy you can get a good view. There is a metal bar in front of most of them which also means that you are a little spoilt with the photo opportunities too. The aquarium also boasts the longest water tunnel in Europe. Its so long that there is a moving platform which slowly goes through the tunnel. The tank is huge and full of different types of sharks. They are fed throughout the day which is interesting to watch. 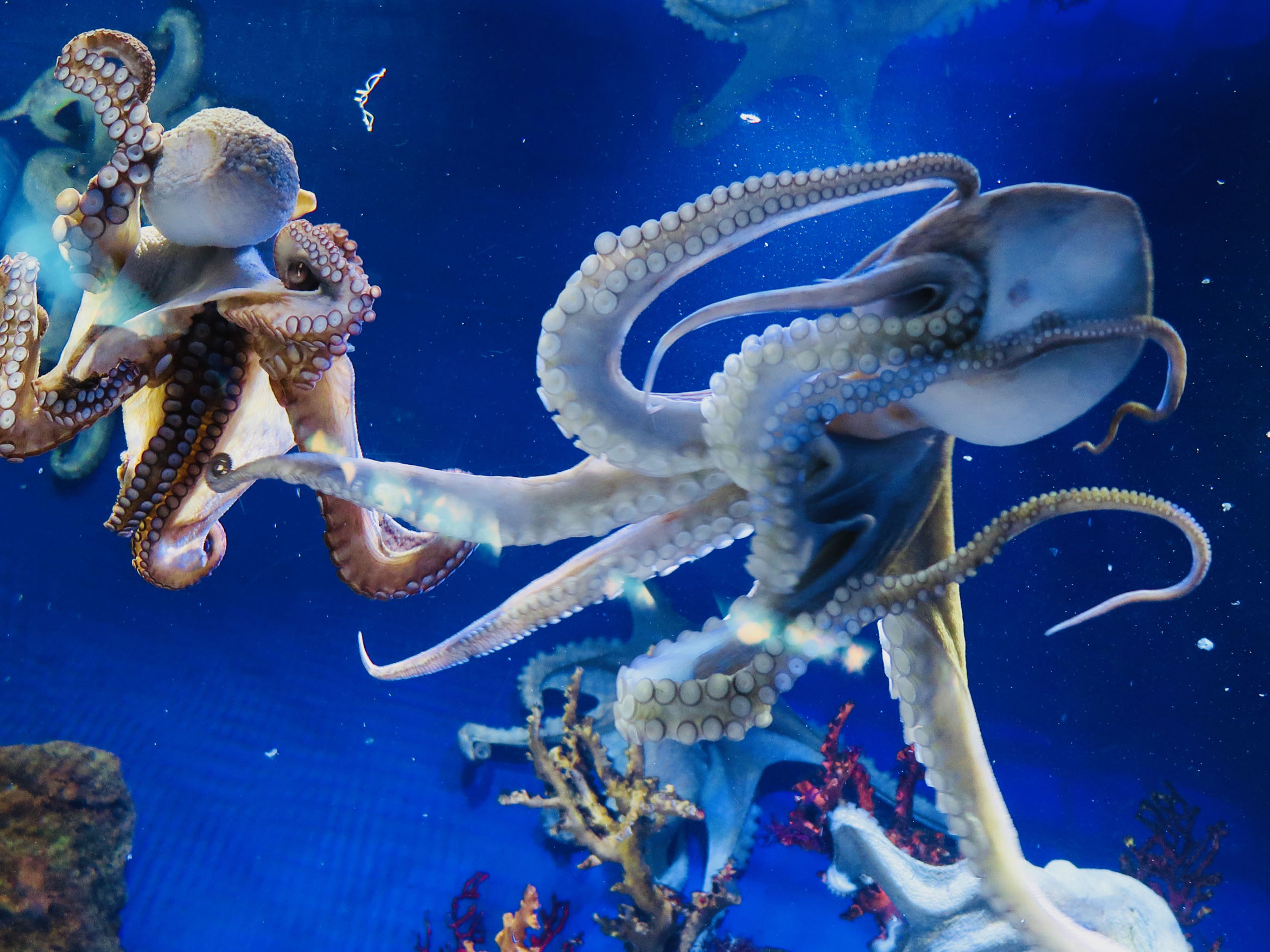 Upstairs there is a snack bar, ice cream shop and education discovery area. Including a model of a whale which you can walk through. The penguins are also upstairs and fed hourly. You probably only need a morning or an afternoon in the Aquarium itself.

Beach – There is a long stretch of beach ideal to soak up the good weather. There are plenty of street vendors selling throws and cold drinks on the beach. In the most part its golden sand flanked by stones at the waters edge. We spent a morning there when we visited although could have easily spent a whole day looking for sea glass. Of which there is tons! I have not been anywhere where there is quite so much. We found white, brown, blue, green, yellow and red glass. Monkey was very proud of his treasure.

There are a few bars and restaurants placed along the front which we used for toilet breaks. Although it did mean we would need to purchase a drink to use them. We discovered early on that Barcelona is not good for public amenities and the beach area is no different. 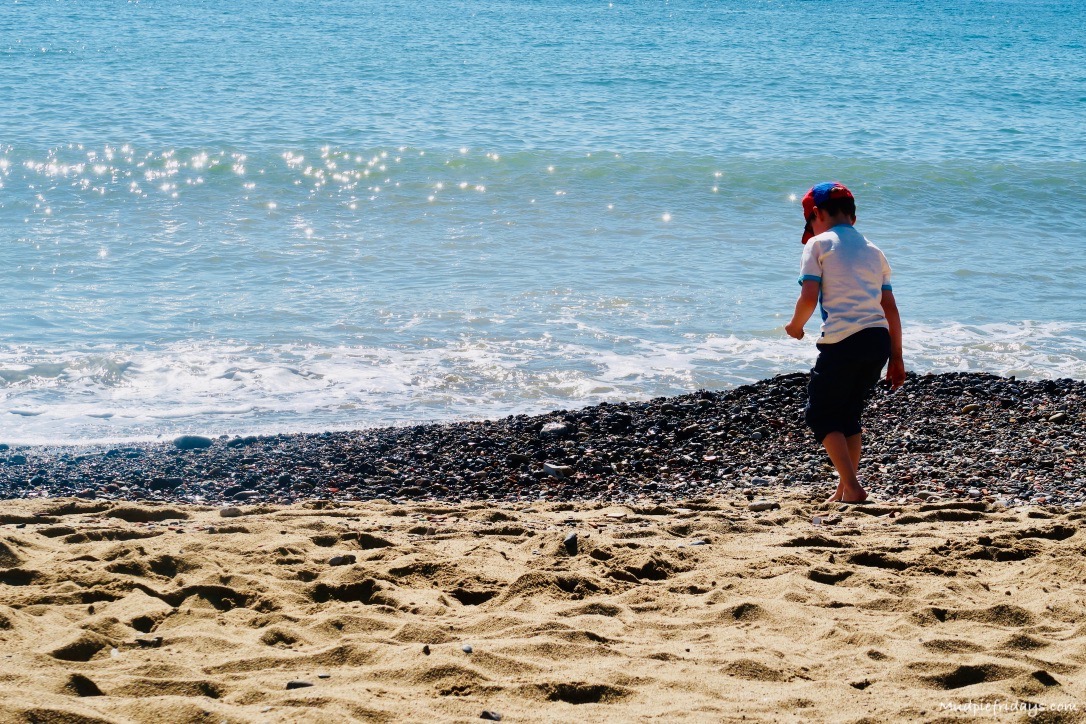 Port Cable Car – We decided to try this out around the middle of the day which was a bit of a mistake as we had to queue for two hours! First you queue to get the tickets, then for the lift and then for the car itself. But Monkey was so desperate to give it a go. Thankfully they do have toilets at the top of the tower. It was worth the wait I must say as we zoomed across the port area. The views were spectacular. Kids are also free so it only cost 11€ one way. It is possible to have a return ticket but the queue was just as large at the castle end so we had already planned to explore a little on foot. 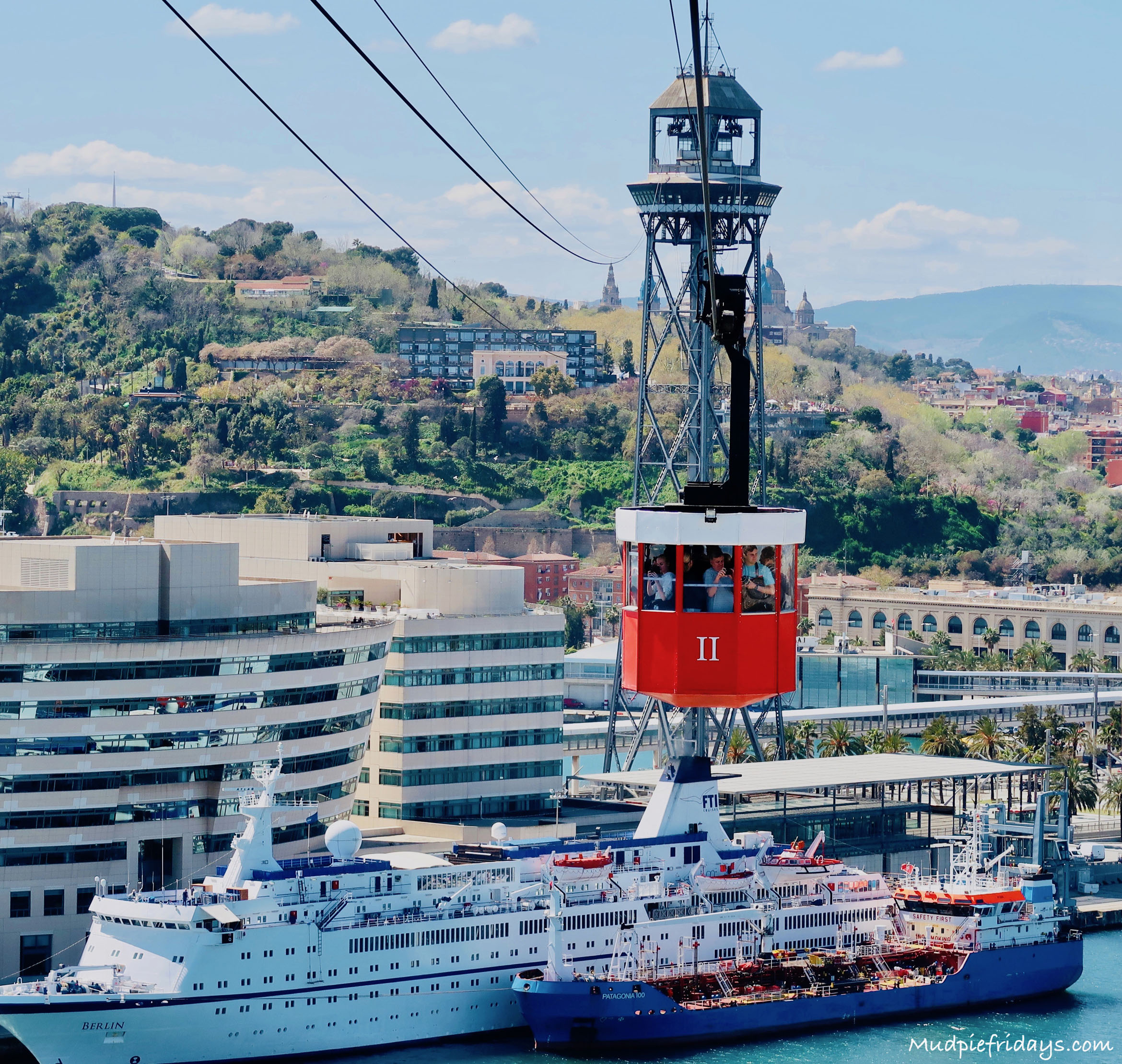 After the wait we also stopped for lunch in a bar which had the most amazing views of the cable car. Its not the most extensive menu and I am sure probably not the cheapest. However it was hugely convenient and just what we needed after our wait! Plus there are no cafe’s or other resturants by the Castle itself.

Castle & Cable Car – I was a little worried after having to wait so long at the port to catch the cable car that we would have another long wait to get up to the castle. However when we arrived about 4pm we walked straight on. We got returns this time. The cable cars themselves are much newer and smaller. More like the ones LINK over Docklands

I was blown away by the size of the castle. Monkey thought it was ace running around and seeing the canons and the guns. Although there is not much there other than the fortress itself you do get great views of the city. It also allowed him to let off some steam by running around the top and in the courtyard. 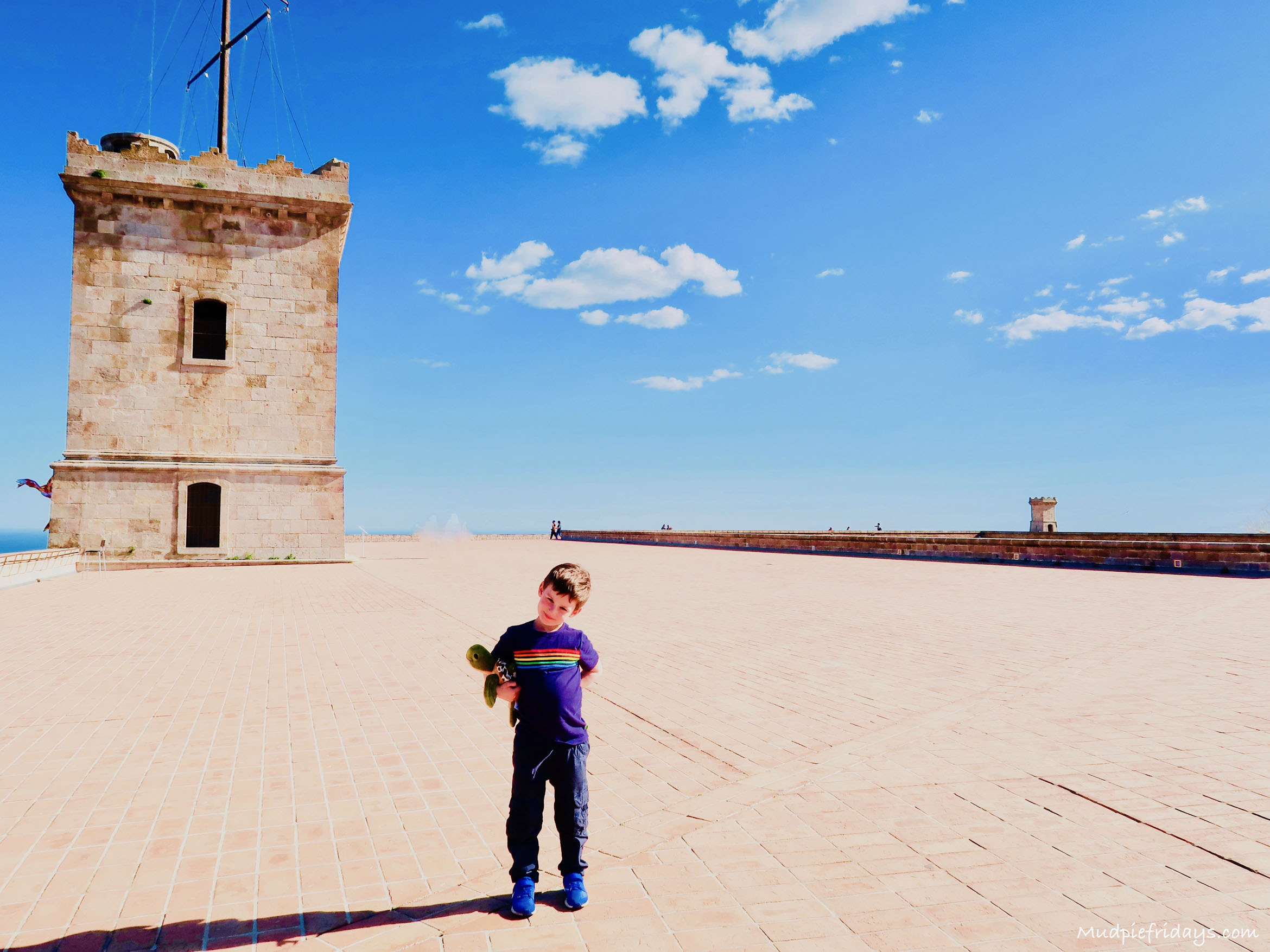 Funicular Railway – There are a couple of different funicular railways in the city. We gave the one from the castle a go. It operates just like other areas of the metro. A ticket cost 2.20€ which you must buy from the machines. Although its only a short way down its still a great experience. Monkey sat at the front of the train watching through the window as we descended. 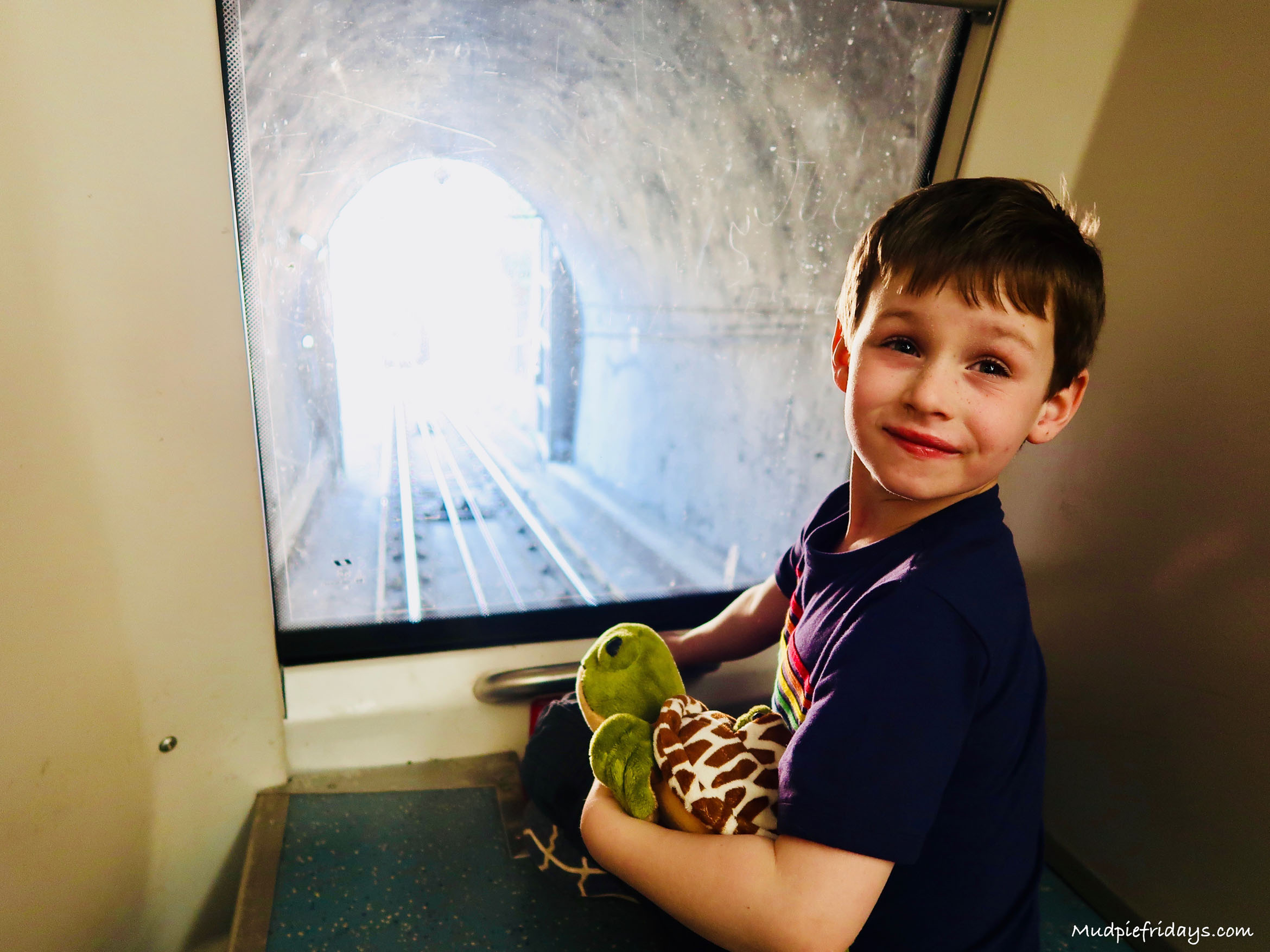 Zoo – We didn’t visit the zoo on our most recent trip to Barcelona. Although we did the time before when we were staying in the Costa Dorada. Its a reasonably small zoo with a great playing area. Although many of the enclosures are older, which means they are on the smaller side. I wrote a full review about it when we last visited which you can read here – Barcelona Zoo.

Wander down the Ramblas and through the Market – Our hotel was just at the top of the Rambals which meant we could wander early in the morning before it got busy. Monkey liked looking in the little souvenir shops and flower stands. Although I think his absolute favourite was the market. Walking in and seeing heaps of fruit arranged in attractive patterns all the bright colours was met with squeals of excitement. Its a busy, bustling market with lots to look at. As you get into the centre you reach the fish stalls. We spent a long time looking at all the different types of fish. He was particularly taken by the lobsters and the crabs. We even stood for a while and watched one of the fish mongers fillet the days catch. Of course the chocolate covered strawberries were hard to resist… 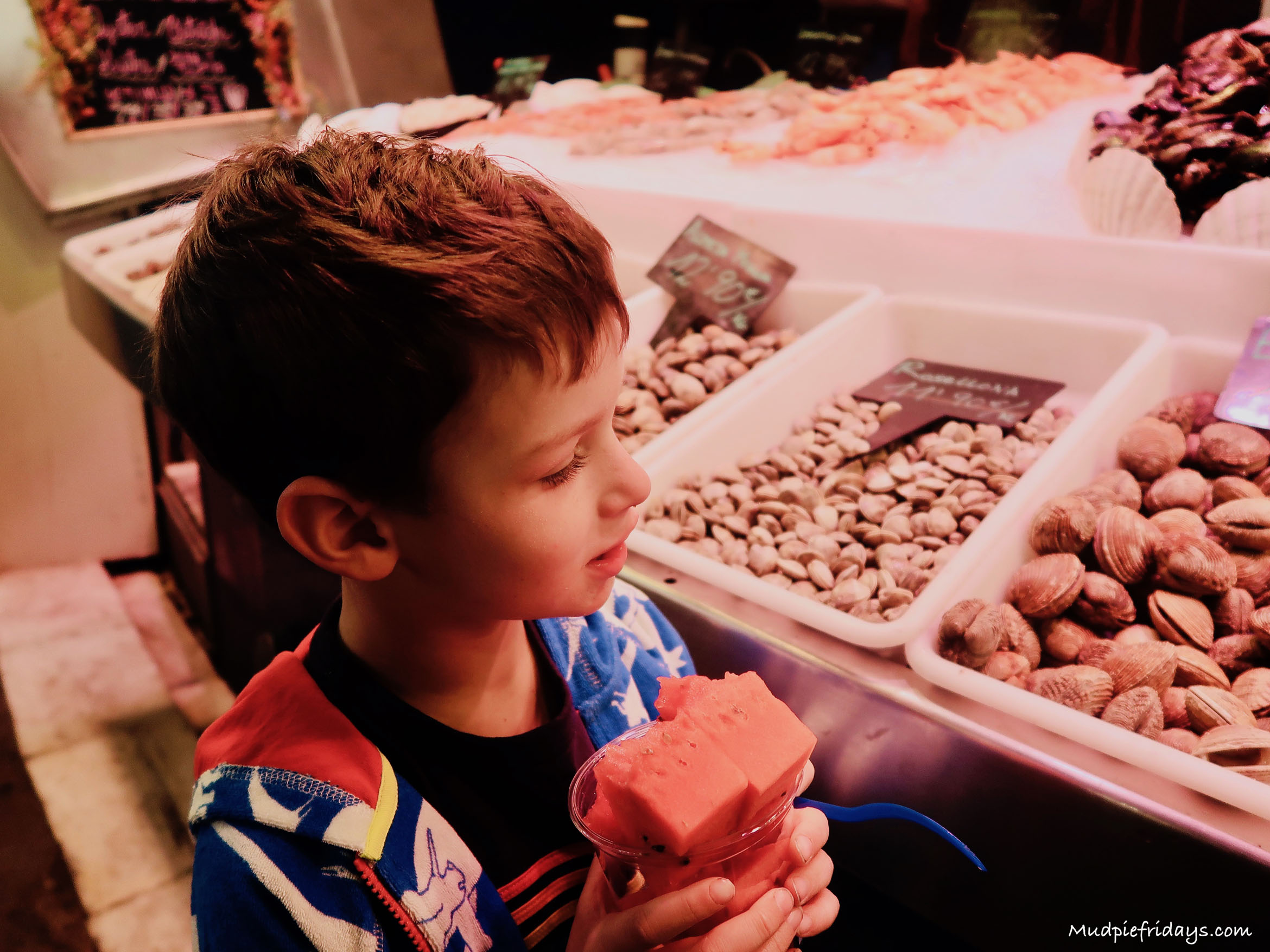 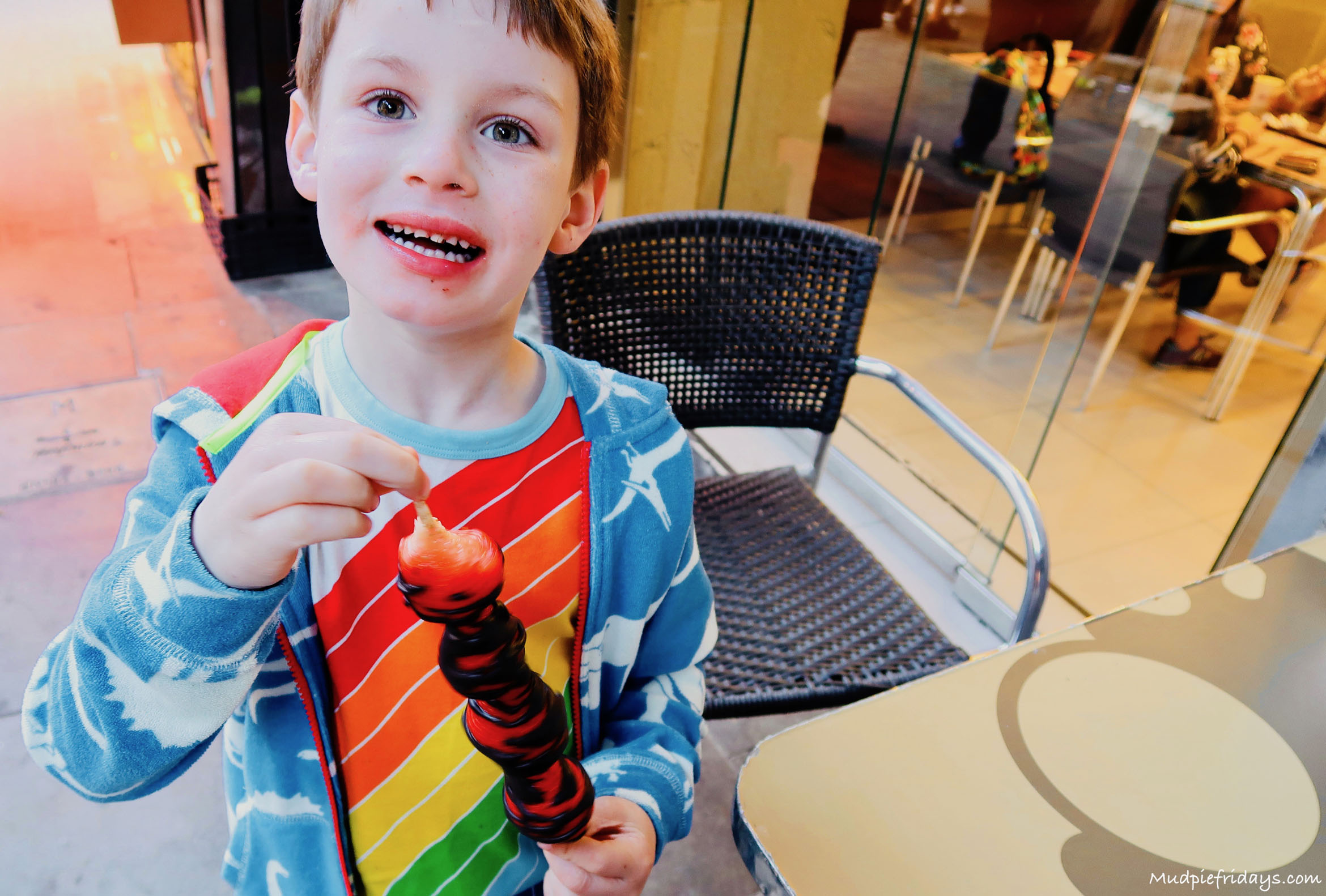 Eat Pintos – We are blessed with Monkey who will try pretty much anything you put in front of him if hes in the right frame of mind. One of the local dishes is pintos which is essentially tapas on bench bread with a cocktail stick through the middle. There was a restaurant just down from our hotel where the menu was pictorial and your placemat. This meant Monkey could easily choose what he fancied trying. They are like mini meals and desserts are the same! 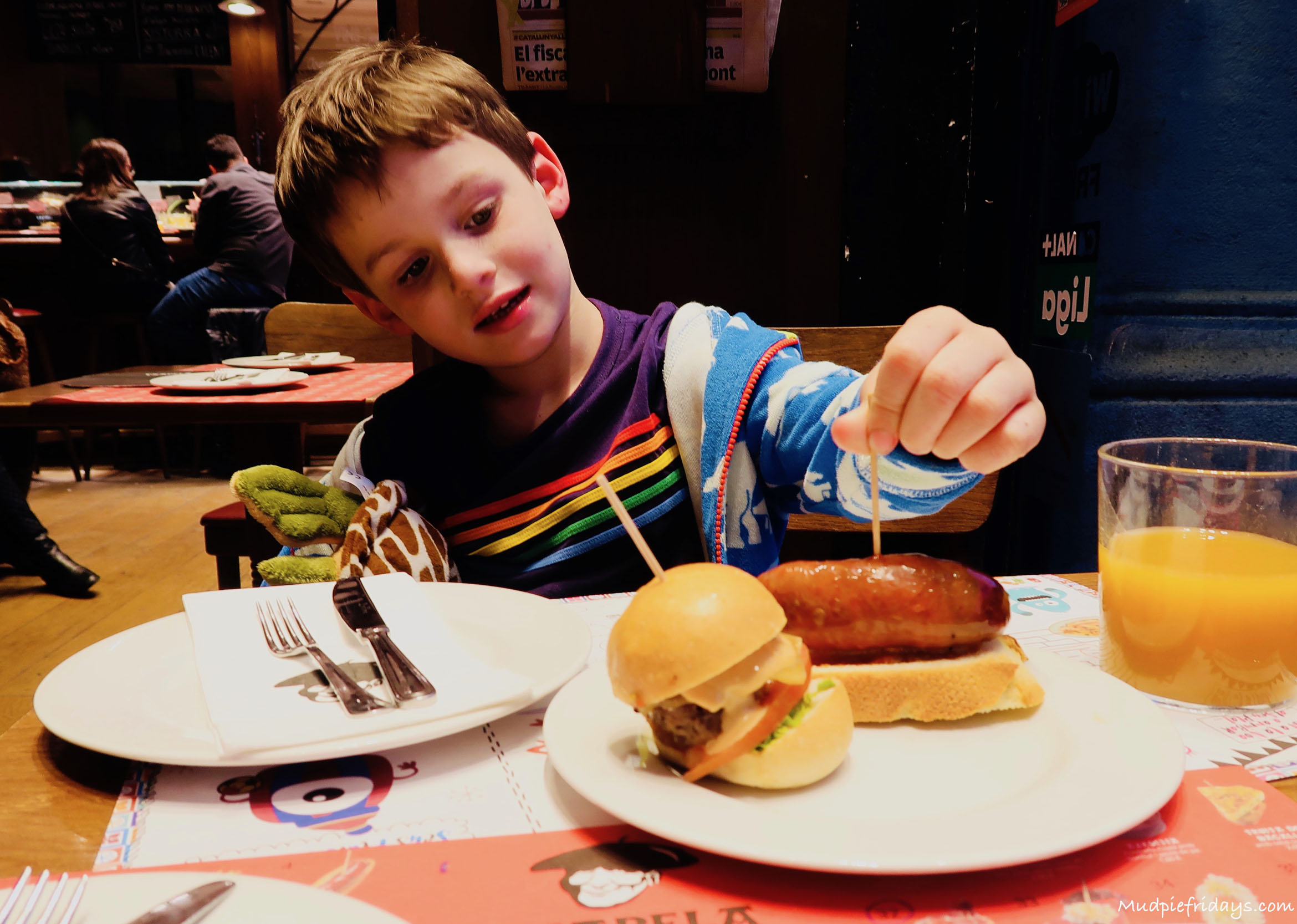 Watch the fountains – The one thing we didn’t get to do which we wanted to was to watch the fountain light show near the palace. Instead we had to make do with the ones in the square at the top of the Ramblas which we could see from our balcony. The reason we didnt visit was partly because they didn’t turn on until 9pm which for Monkey when we needed to get back across the city was too late. However its the perfect excuse to visit again! 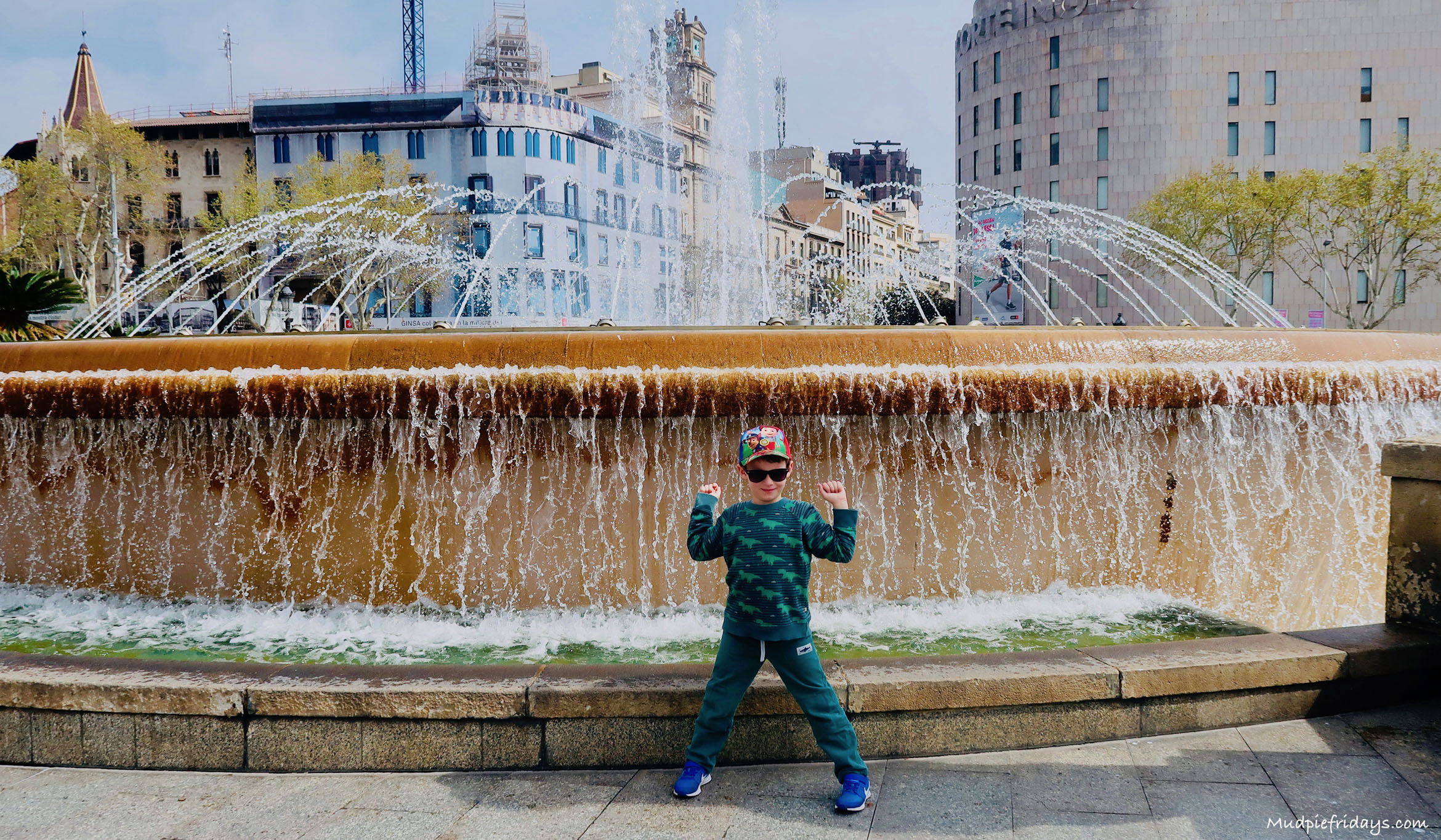 Have you been to Barcelona? What was your favourite attraction? 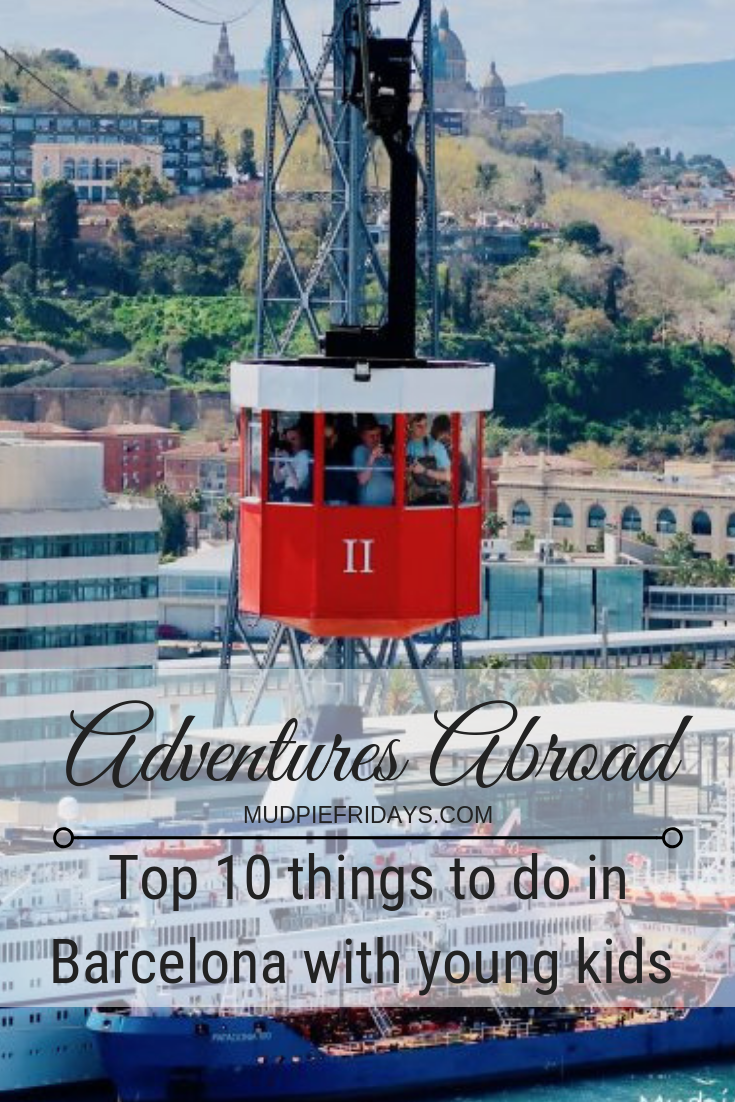 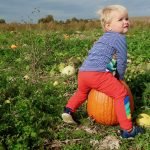