As I am getting ready to plan Monkey’s third Birthday party I thought it opportune to post about his previous two parties. You can read about how his second ‘Gruffalo’ themed party went here.

I am sure all parents can relate to the fact that the first birthday party is a big deal… well it was in our household anyway. In fact it ended up being nearly as big as our wedding with over 70 adults and 18 kids being invited and accepting.. Im not really sure what I was thinking at the time, because by then I was back at work (so no time what so ever) and we had decided to hold it at home. Am I mad? Quite probably since our house is on the small side! I had all these amazing ideas which I wanted to play out on the day… guess what, some did, but the majority didn’t materialise. I hit another big learning curve on the parenting road – sit back and enjoy the occasion rather than getting cuaght up in the organisation. A lesson that I am sure I will heed on the run up to Monkey’s third party…

So first things first – a theme. Thats pinterest for you.. (you can check out my Hungry Caterpillar board here). I decided on The Hungry Caterpillar, as Monkey was far to young to ask what sort of cake he wanted, but he did keep pulling that particular book off of the bookshelf so it seemed like as  good as any. And for most of the people coming it would transport them back to their own childhood.

Outfit, Invites & Thanks You’s – So I brought invites thinking that it was the easiest thing to do – in fact I am yet to make my own for any of Monkey’s parties to date, although that might be changing this Birthday. For his thank you cards I took a photo of him in his highchair playing with balloons (including a huge number 1 balloon) in his Birthday t-shit & hat. I then turned them into cards on Photobox. I made the T-shirt by using some Hungry Caterpillar material cut into the shape of a one, and sewn onto a plain white T-shirt. I also used glittery iron on letters to put his name at the top. The party hats were home made printed off of the internet with a pom pom glued on top.

Decorations – We put up some gazebos because the weather was so hot to try and keep the sun off of the little ones. Round the top I strung streamers in the colours of the rainbow. When the wind blew it was really effective and they loved it. Unfortunately I didn’t get any photos of it. One thing I regret from Monkey’s first party is that I was too busy keeping everyone else happy and photos were just random, unplanned and on the off chance! I made a Happy Birthday banner from card stock and used some left over material to keep it in theme. Between the bunting triangles I cut leaves out of vellum to give it added interest.

In the conservatory I used some paper light shades off of eBay in two colours of a green and a red one for the caterpillars head. I used card stock to add in the detail. I loved it so much it stayed up for a couple of months!

Games & Entertainment – There were children of lots of different ages so entertainment was difficult! In the end I put together the following.. 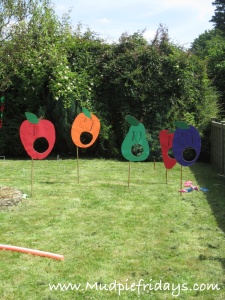 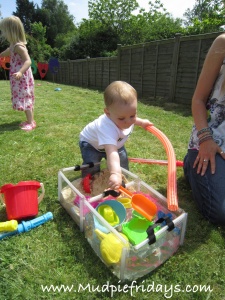 Thankfully everyone seemed to stay entertained for the majority of the afternoon.

Food & Cake – I am a novice baker to say the least and with everything else to organise I made the decision to buy in the cake. Especially as it needed to be quite large! There is a local shop which made the three tier cake and iced it for me. I then decorated it with the help of a friend with fondant icing. It turned out much better than I could have hoped. In the middle of the while tier where it looks a little bare I had cut out his name in matching colours. It was so lovely I didn’t want to cut it.

For the food we provided a BBQ for the adults and party food for the children. In hindsight it was really hard work as my husband was at the BBQ for most of the afternoon. We only managed to get one photo together the three of us – the first time Monkey tried ice cream! Lesson learnt. To keep in theme I also laid out lots of fresh fruit with little signs relating to the story.

I hope this has been useful for all those out there planning their little Monkey’s first Birthdays. You may also want to check out my First Birthday Time Capsule Post here.

Are You Going to Britmums Live 2015