I have been keenly attending my evening photography classes now for a couple of weeks. This week we learnt all about aperture, suddenly taking photos of Monkey with a background of household bits becomes less of a problem when you understand how to blur them! Next week we are doing a little show and tell and the tutor suggested getting some examples of pictures demonstrating what we have learnt. So the big question – where do I find a waterfall in Sussex? By using a high aperture setting the waterfall can appear wispy and cloud like while the remainder is sharp and focused. Sounded like a challenge and I thought it was worth ago. As I have mentioned previously I want to use our National Trust passes more this year, so on Friday thats exactly what we did. The weather was pretty rubbish, spotting with rain but it didn’t stop us having a good look round. One of the reasons for visiting Sheffield Park was that they have Pulham Falls, which they turn on twice a week on a Tuesday and a Friday between 12 and 1pm.

The carpark is a good size and there is no additional charge to park. It is surrounded by pine trees, as soon as we were out of the car Monkey was spotting pine cones. The majority of which were still in the trees and difficult to get hold of. We did manage to find one on the floor which was in reasonable nick and sparked a whole conversation about warming it up in the the oven to open it up. There is one entrance to the gardens where we picked up a map and headed through to the waterfall as we arrived around midday. Monkey was very helpful with he tripod allowing me to take a few photos before he got bored and wanted to do something else. 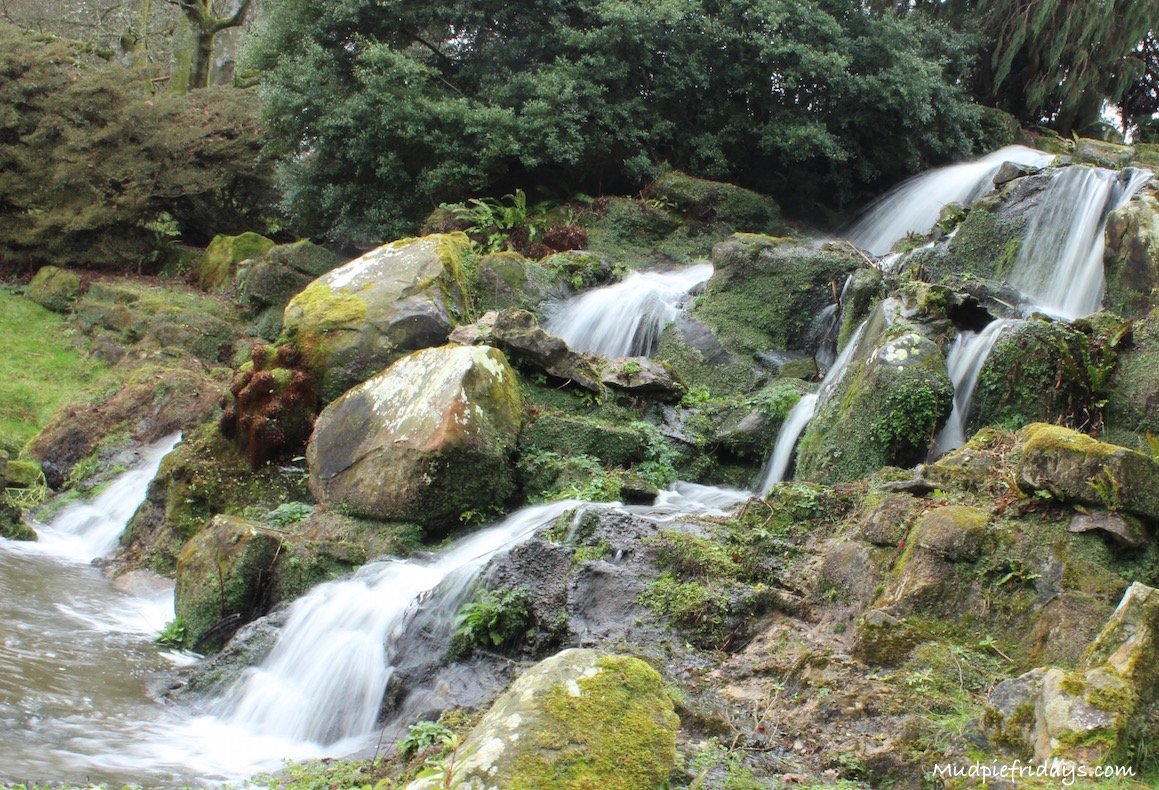 Having not visited before I was unsure what to expect, we walked around the lakes initially there are four in total. Monkey had fun exploring the tree stumps and climbing in the rhododendrons. We didn’t take any bread with us, which turned out to be a bit of a shame as the ducks were very friendly! I think they must be use to being fed as they actually came out of the water and crowded round. Monkey thought it was great! Next time we visit I will definitely take some bird food with us. It wasn’t long until Monkey decided he was hungry so we headed for some lunch in the tea rooms. In order to reach them we needed to come out of the main entrance and head past the carpark. The building which houses the tea rooms use to be an old Church House which they are currently renovating. 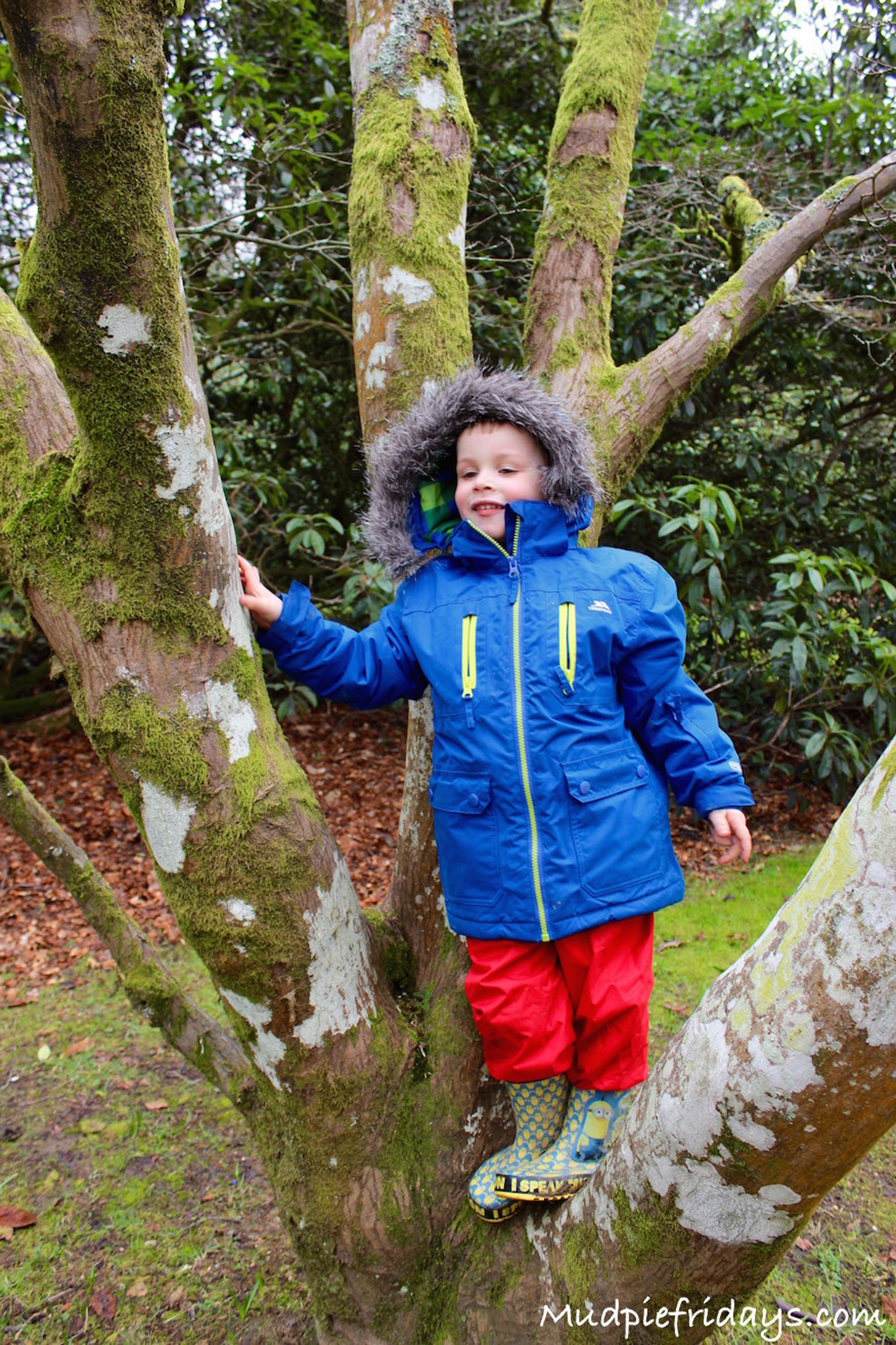 Its a good size and has two rooms an Oak Hall and a Garden Room. Both of them have log burners in and reach the normal high standards for the National Trust. As ever their cakes looked appealing but they also served a reasonable amount of hot food for both children and adults. We sat in the Oak Hall, I felt that there was something romantic about the Oak Panelling and the balcony area. I could imagine it set out in as a Wedding Venue with the log burner crackling in the centre.

Looking at the map we discovered that over in the park land there was a Ringwood Toll Natural Play Trail. However it was a reasonable walk and Monkey had already requested shoulders, so we decided to give it a miss this time round. Returning to the lakes on the hunt for more pinecones. 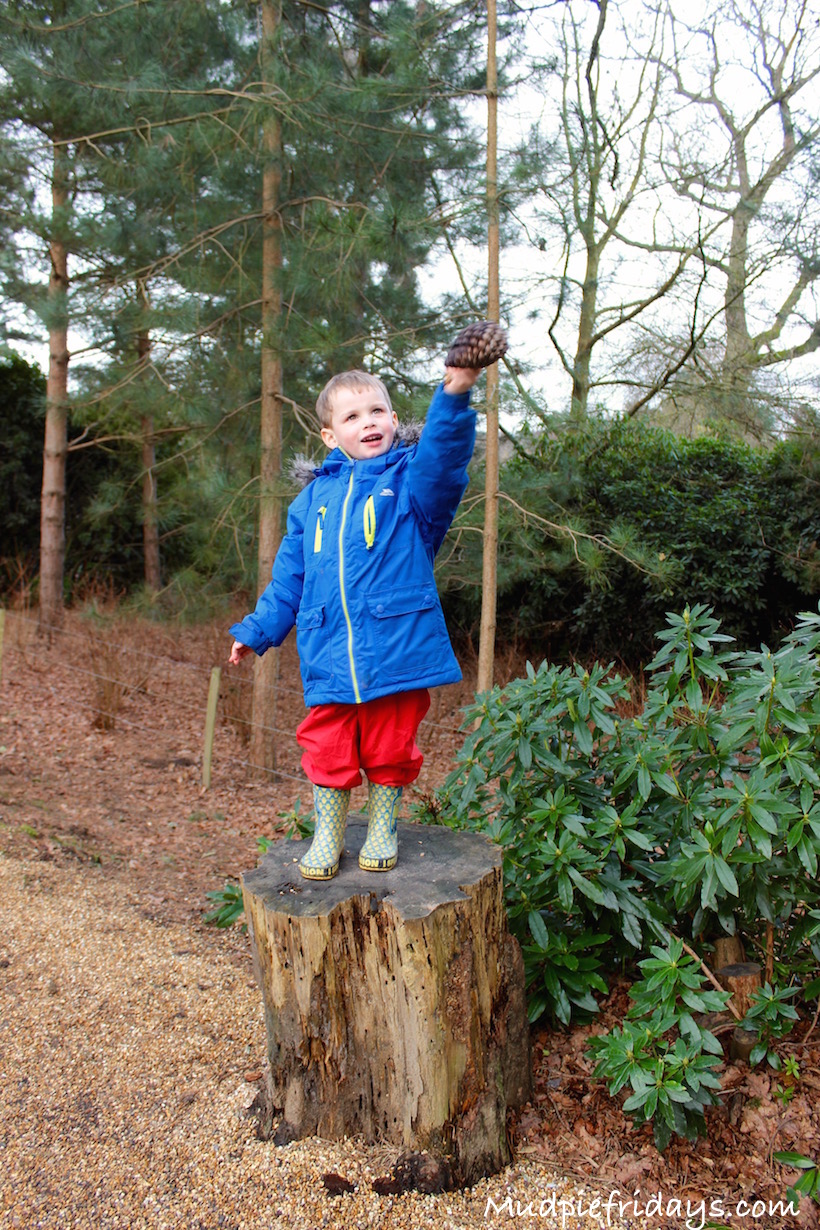 We will return in the spring to have a look at the play trail and follow one of their walks. There are five in total, one which is approx 1 mile, another 1.5miles, the play trail, a walk which allows dogs to be off the leads and another that goes to the Bluebell railway. Preferably with Hubby incase Monkey does need a hand on the distance. Being almost 28 weeks pregnant its been a while since I have been able to carry him!

Have you visited any National Trust places recently which you really enjoyed? I would love to hear about them in the comments as we are hoping to make the most of our passes this year and I am on the hunt for ideas.