I can not believe where the time is going, you can read all about Kipper’s two month update here! Since his sleeping schedule is becoming more predictable during the day, I have started to introduce play sessions. I do mean play in the very looses sense of the word but he seems to enjoy it. I was starting to struggle with him grizzling a bit and being unsettled after feeding and I think it could be because he was bored. Mad I know!! Generally he tends to want to eat, play, sleep. Don’t get me wrong he is still sleeping a lot during the day which I encourage after all we all know how important it is but generally there is an hour or so after he has fed where he wants to interact. So here are the things we have been getting up to. 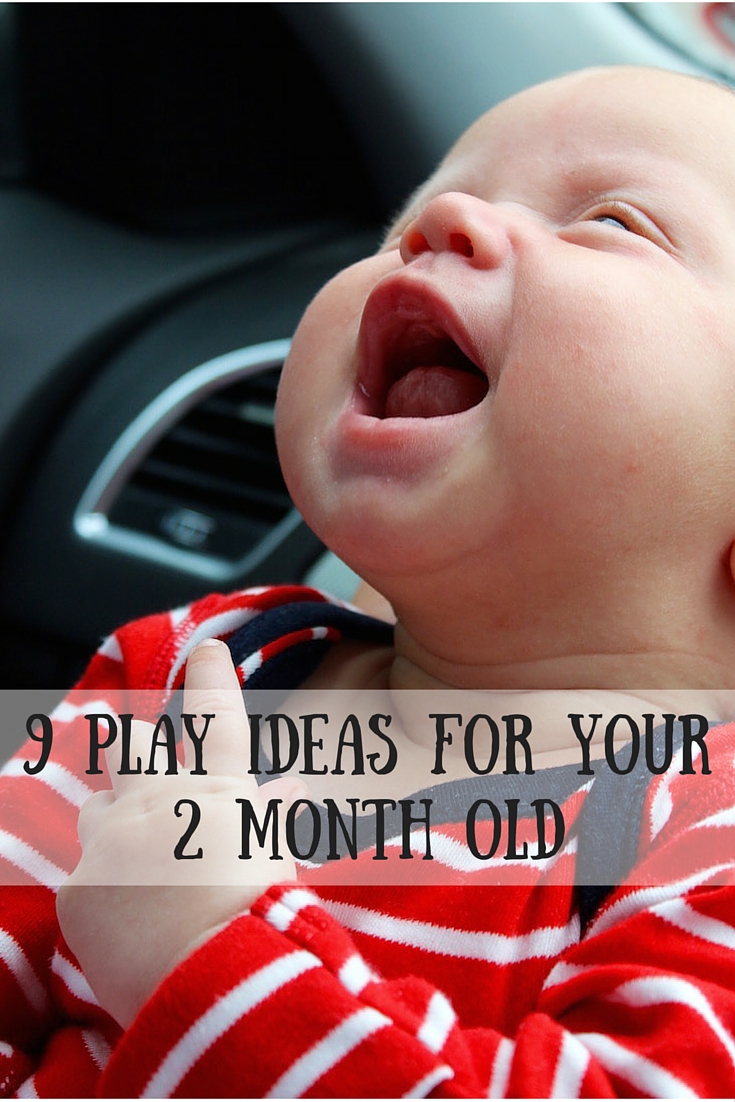 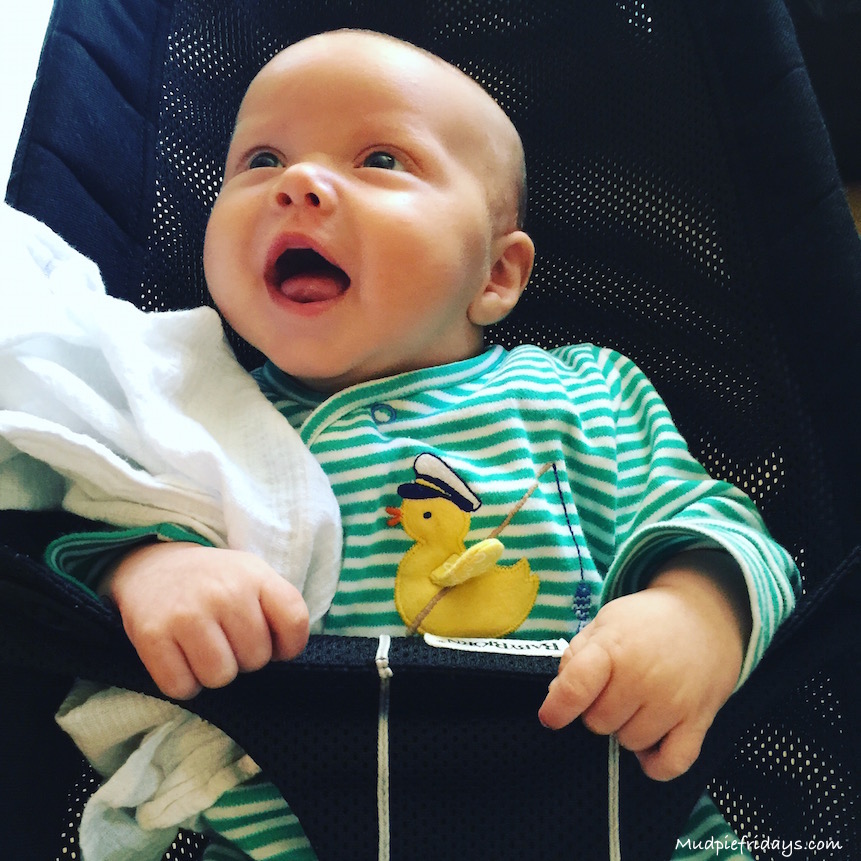 Kipper has started smiling and it melts my heart, he’s not particularly free with his smiles so I have been encouraging them whenever possible. As he’s started to mirror what I do, I often throw the odd tongue poke and screwing up of nose as well. He seems to find the whole process enthralling!

Getting out and about:

Regular readers will know that I love to spend time outside often at National Trust properties and have a ton of visits planned for the Summer. If we aren’t on a day out I try to get Kipper out in his pram everyday with even just a short walk down the road. Unless its raining of course as you don’t get to see much with the rain cover on!

Following on from getting out and about when we stop for lunch I will often let Kipper have a kick around on the grass. I have noticed that he really likes to watch the leaves in the trees and seems to finds it very soothing. He’s at the age when them movement of his arms and legs is new and exciting so its important to give him lots of chance to practice.

The dreaded tummy time! I know a lot of friends whose’s babies aren’t keen. Kipper isn’t too bad, as he gets stronger I will be looking for ways to enhance the experience for him. However at the moment we just use a little mat which comes with a specific cushion. Although a rolled up hand towel would do the job. If you place baby’s arms over it so it under their armpits it will help to support their chest in the early months. 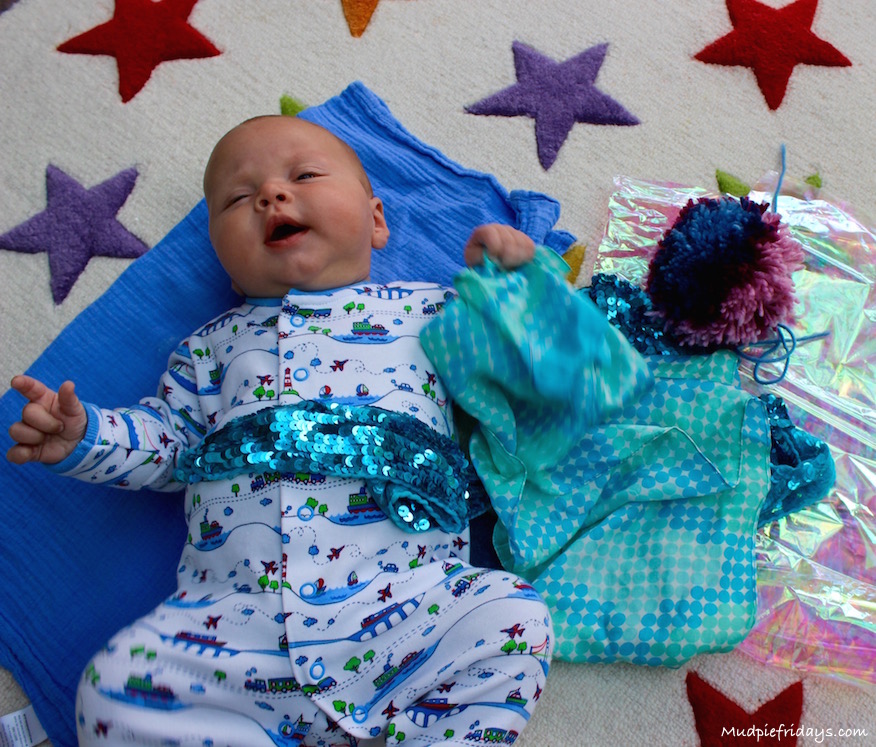 I chose four things out of Monkey’s Textile Treasure Basket – a sequin scarf, silk scarf, wool pom pom and some cellophane. I then gave them to Kipper in turn letting him feel and touch them. He seemed to like the silk scarf the best. Although he was interested in the sound the cellophane made. Over time I will introduce other materials to him as well – its never too early to start sensory play!

I often have conversations with Kipper about all sorts of things! (But I avoid baby language and goo goo garrr garr speak.) He has started to try and talk back making gurgling noises and smiling. As I read to Monkey I am now including both of the boys.

As you can see from the photos above Kipper loves his play mat, in the last week or so he has started to bat the toys hanging down. The little gurgles of delight are lovely and any encouragement will go towards helping his hand eye coordination.

I have an A3 acrylic mirror which I have started to use to show Kipper his reflection. At the moment he sort of stares blankly!! But I am sure over time he will start to take more interest. I like the size as it means I can also be in the reflection too, making silly faces!

Somewhere up in the loft I have some black and white books from when Monkey was tiny. However since I need to wait for Hubby to get them I decided to google black and white images. There are lots available on the internet for free. To date I have just shown them to him while he’s been on his play mat or during tummy time. The black and white images will help his brain development. You can read more about how here.

What have you been doing to entertain your little ones? I would love to hear about them in the comments below.

Linking up with DreamTeam