I think as soon as we landed in Spain Monkey was asking to visit a water park. PortAventura World Caribe Aquatic Park with young kids. Thankfully while we were holidaying in the Costa Dorada we were given the in Europe – PortAventura World. Right next door to the theme park is their water park – PortAventura Caropportunity to visit one of the largest theme parks ibe Aquatic Park which we were also given tickets for. Having looked at water parks in the area I was a little concerned about how many of the attractions within the park that he could actually go on. He’s a bit of a dare devil so he often gets disappointed that he can’t go on certain things because of his height, so how did we get on? 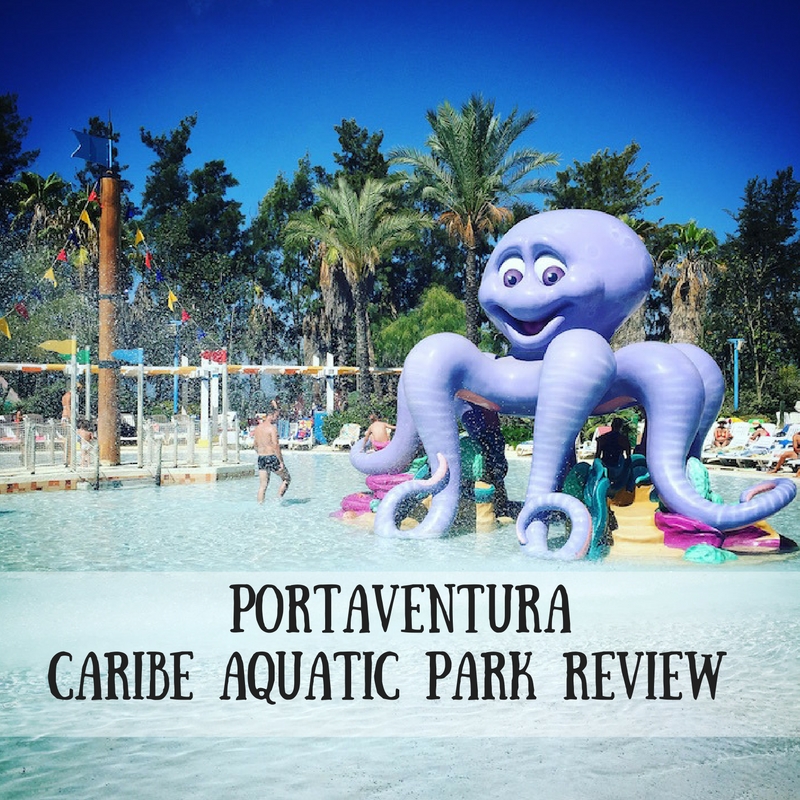 Our first stop when we arrived was to seek out some shade. We found a covered area just past the kiosk where you get the lockers. As we arrived at 10am when it opened we had the pick of the sunbeds, although they do fill up quickly. There are various sun bed areas all around the park, so you shouldn’t struggle to find somewhere to set up camp. However with Kipper only being three months old it was important we had some shade.

Monkey was so excited it was difficult to keep him contained so we decided to head over to the Bahama Beach where there is a little kiddies water play area. 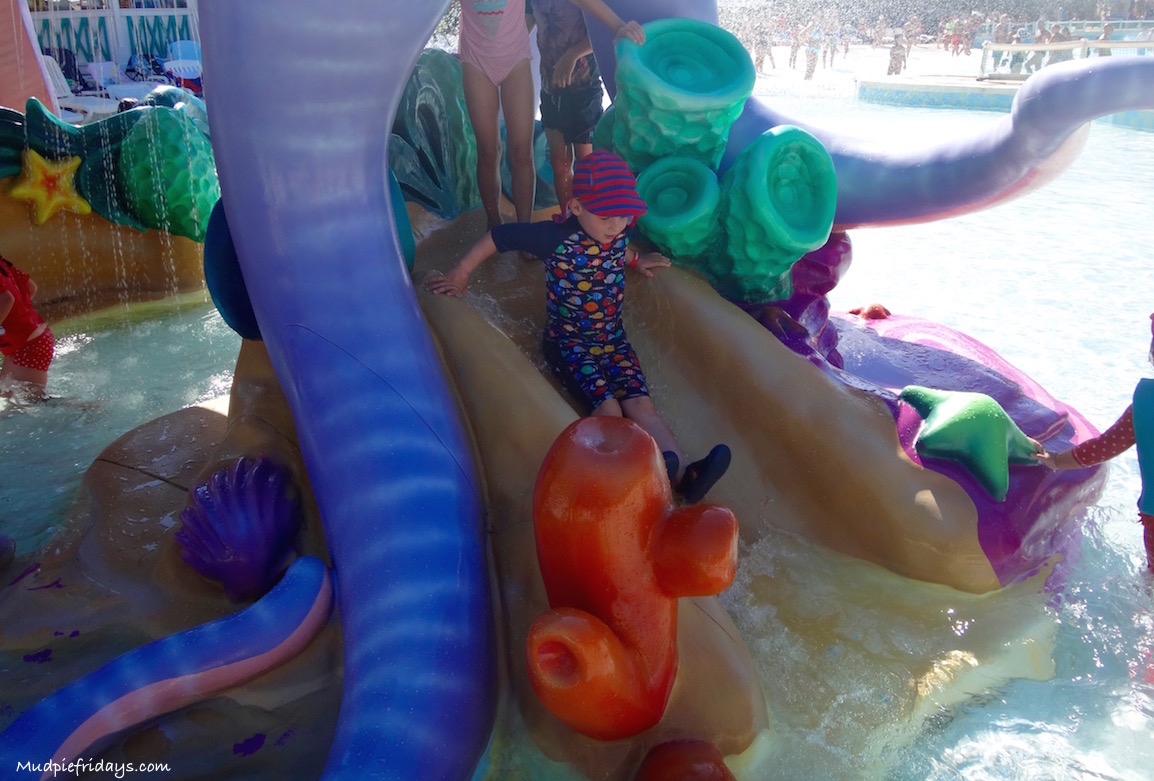 There are sunbeds all around this area, the water is the warmest we came across and is only about a ft deep so ideal for little people. Its  beautiful setting and is right next to the El Triangle de las Bermudas, a huge pool with a fantastic wave machine and a rather mean water jet which caught me a couple of times, much to Monkey’s delight! 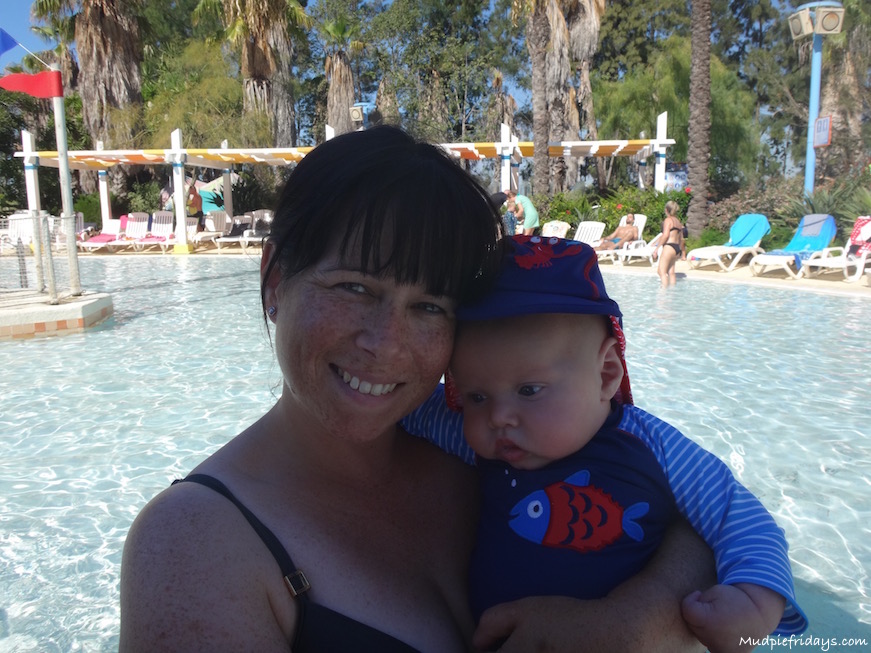 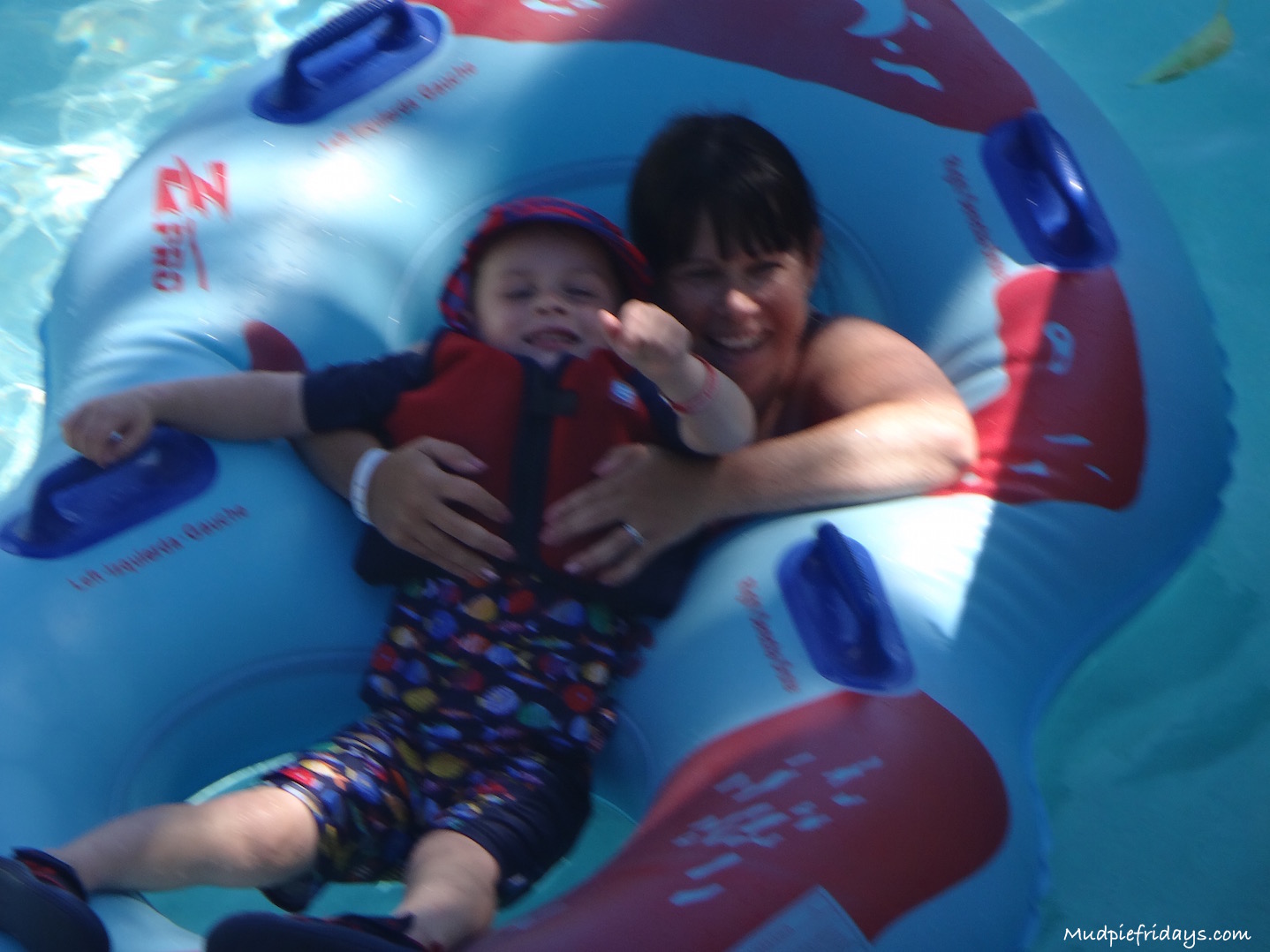 The pool is like a beach which means that all ages can play in it, including tiny ones as they have some bubble jets on the shore. Kipper was starting to tire so Hubby headed back to the sunbeds while Monkey and I tried out the lazy river. You can enter it at several places and they have single and double rings. Monkey was a little small really so the only way was to hold him all the way round. This didn’t deter him though and he went on it several times over.

Next Hubby took Monkey on a slide – El Torrente – rafting fun for all the family minimum height is 1m, if less than 1m then you need to be accompanied by an adult. Unfortunately we don’t have any pictures but he loved it. However the queue was quite long by the time they decided to give it ago. Therefore I would suggest going on the big slides first when you arrive and before it gets busy. The park does offer a fast pass for an additional 15€. If our children were older I think we would consider it to avoid having to queue. Saying that there is a lot to keep them entertained outside of the slides. Monkey also loved playing in the La laguna de Woody pictured below. 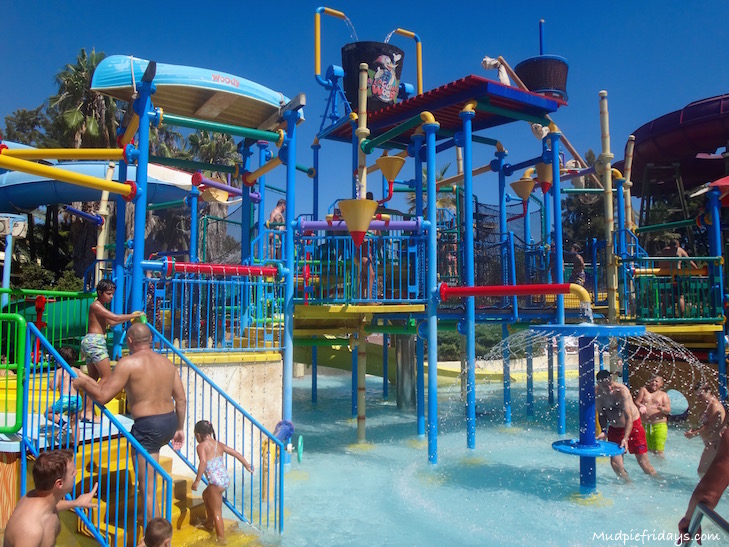 He particularly loved it when the big bucket at the top did this: 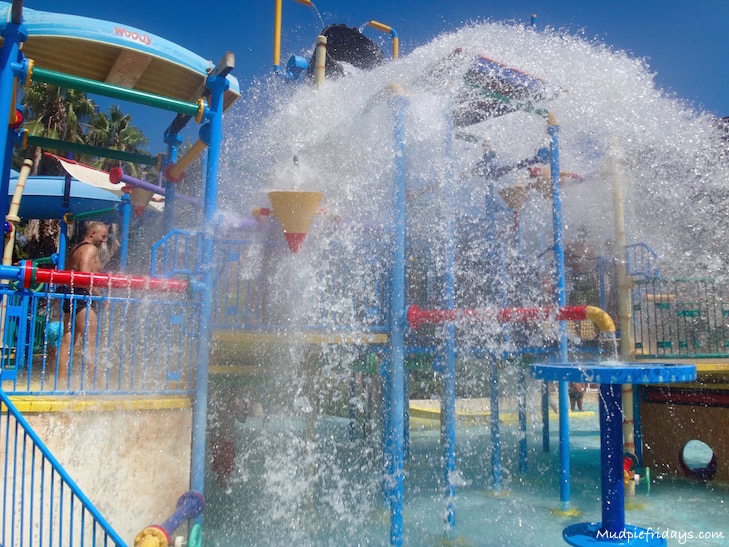 We eventually managed to drag him away to get some food opting for hot dogs and chips. Two super hotdogs, a large soft drink, large beer and chips came in just under 20€. It didn’t take long and Monkey was off exploring again, heading this time over to the ship wreck – El Galeon Pirate. 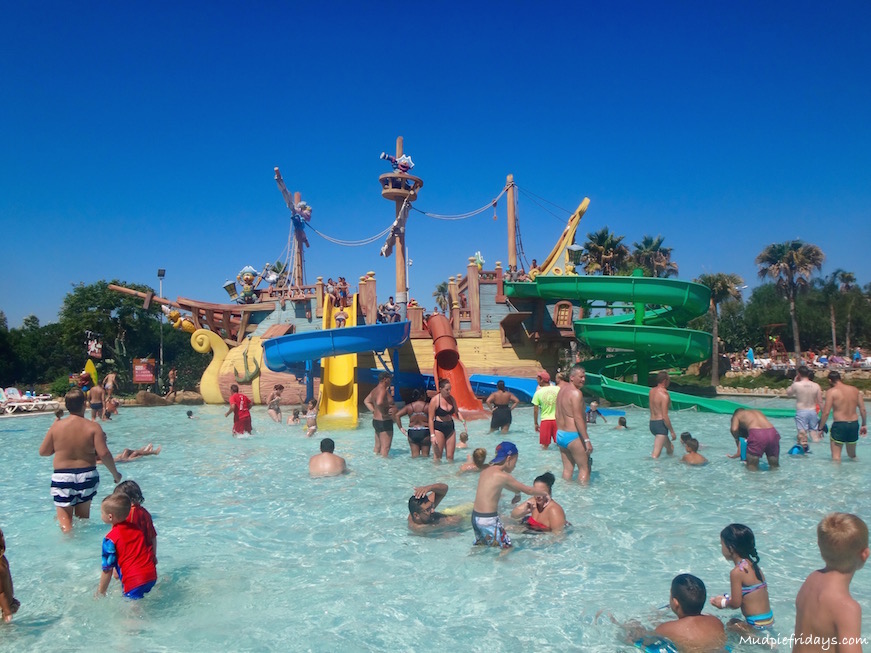 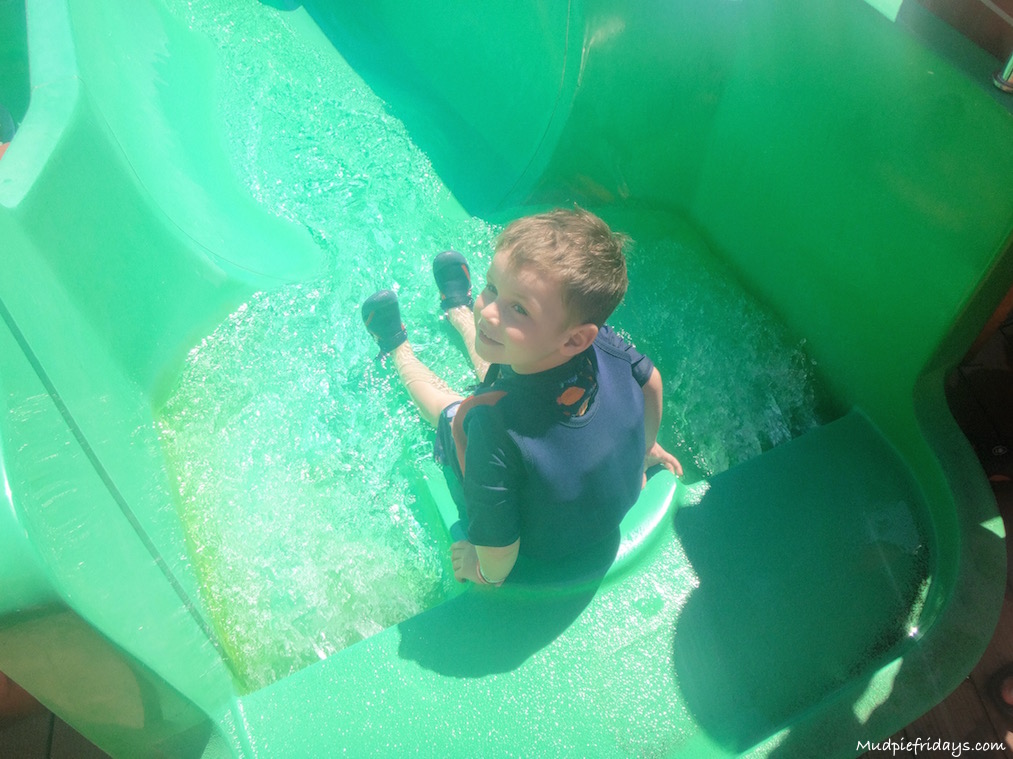 There are four slides designed specifically for the younger visitors and Monkey was able to go on the green and blue slides (110cm), the red and yellow are for children who are taller than 120cm. Show Monkey a slide and he will just go on it over and over again! So as you can imagine he loved this area as well.  Around the pirate ship there are sunbeds and a beach area. There are also plenty of places to buy refreshments and ice creams. This would be a good place to set up camp if you have children of both age groups and some wanting to go on the bigger attractions as they are right next door to this area. 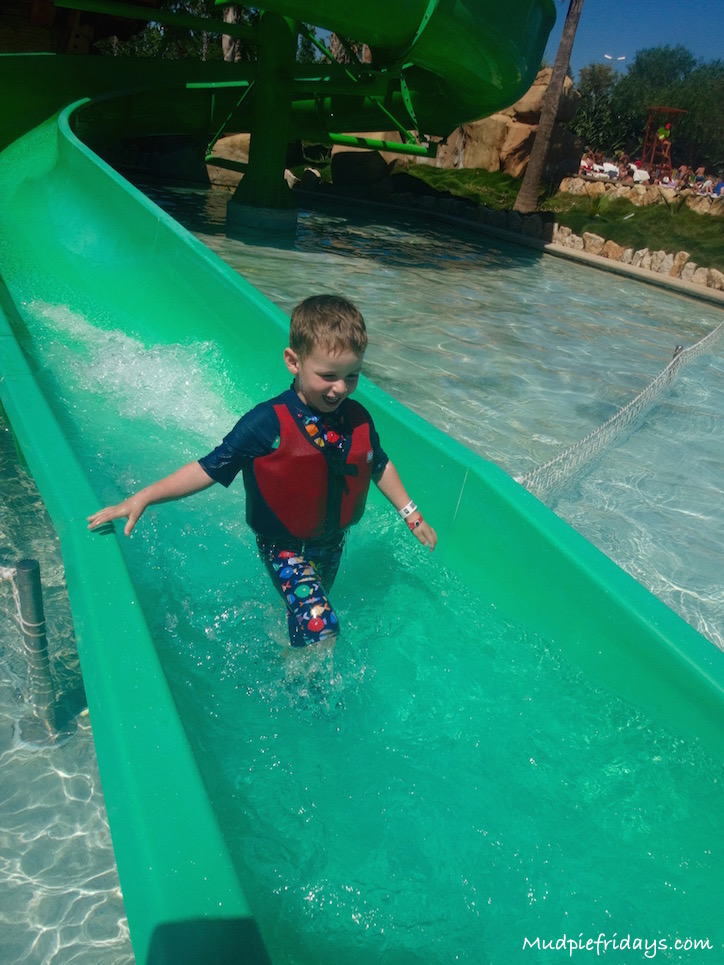 Once Kipper had woken up we headed inside to check out the baby pool, which is only 10cm deep and would have been ideal if he was sitting. Monkey found another slide which he could go on. I must say I am super impressed with the inside area. It backs directly onto a place to buy hotdogs and drinks and has plenty of sun beds. Perfect if you have little ones like we do. The slide which Monkey went on was manned by a life guard at the bottom to help the smaller children up and off the slide. It made me think why we don’t offer the same at home! There were a large number of staff all over the park which is great from a confidence point of view. 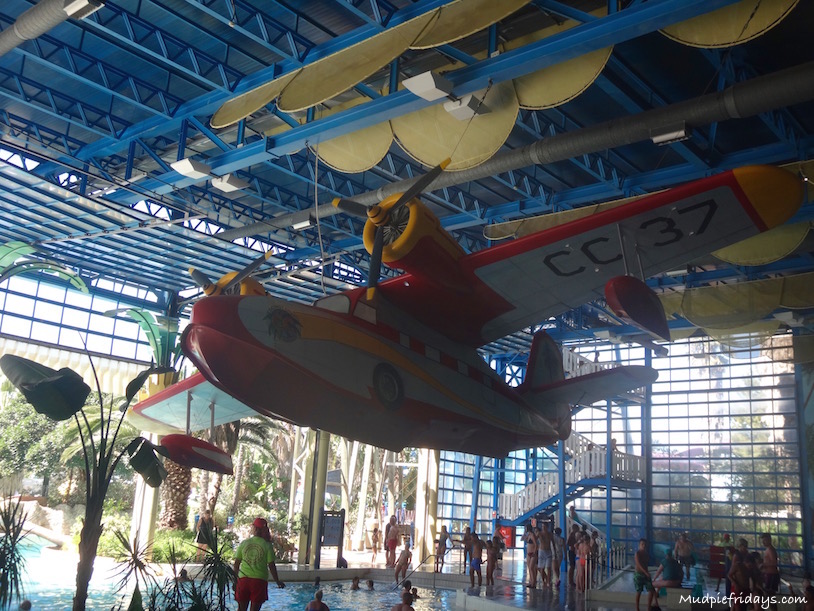 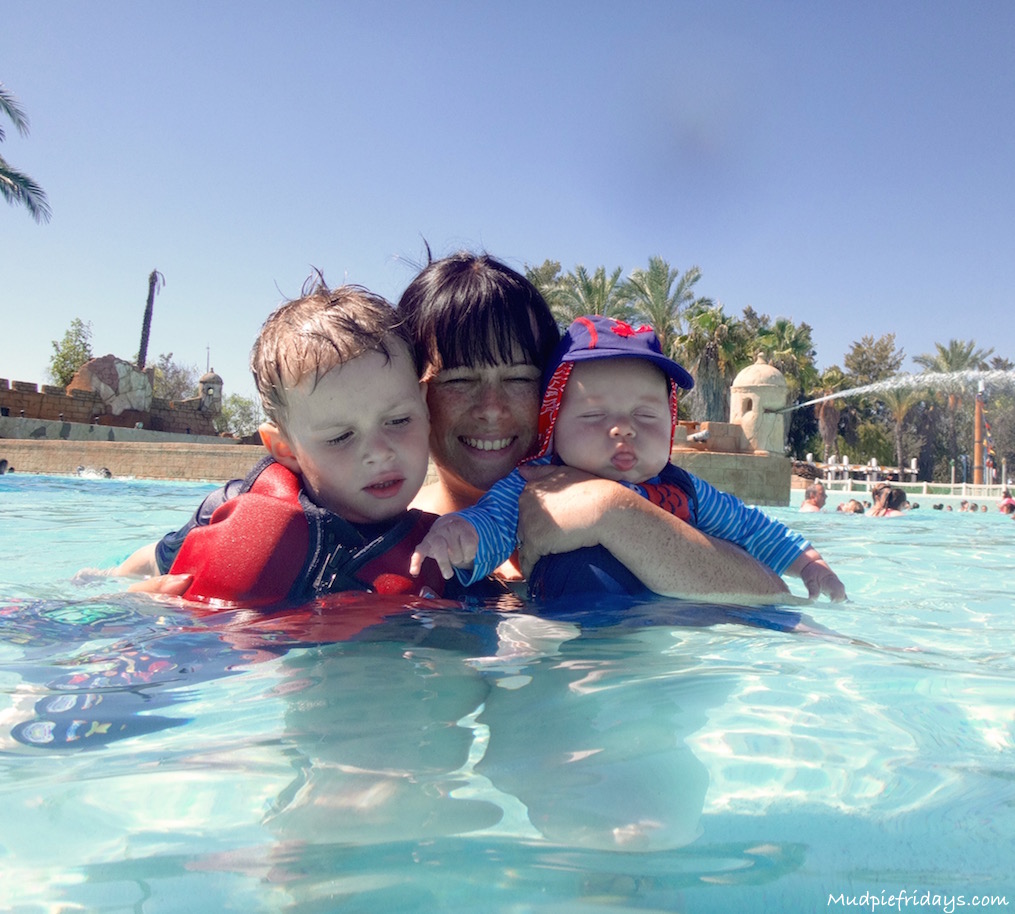 There is nothing we didn’t like about the park! We really enjoyed our visit. If we had discovered it earlier into our stay then we would have visited again without doubt. We also visited the theme park which we reviewed in this post. 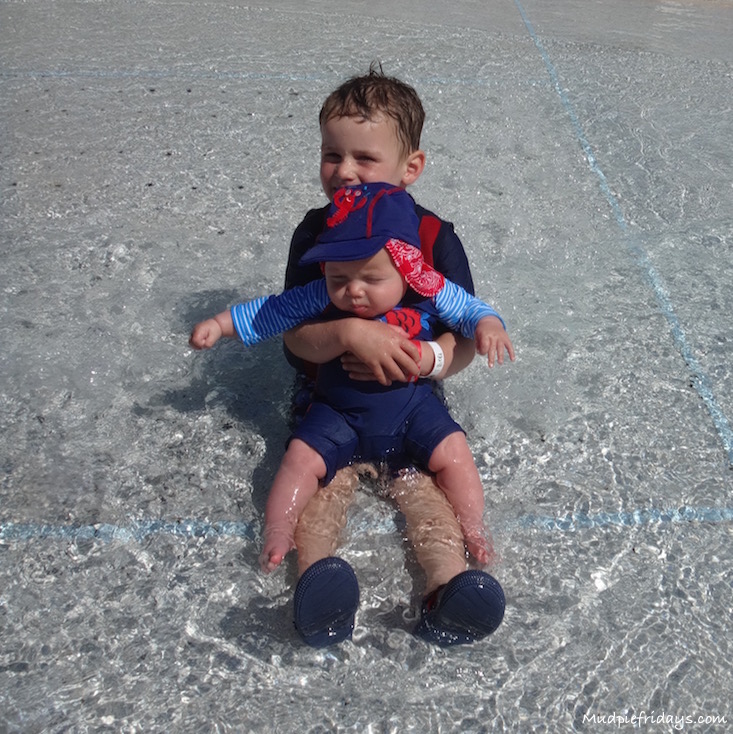 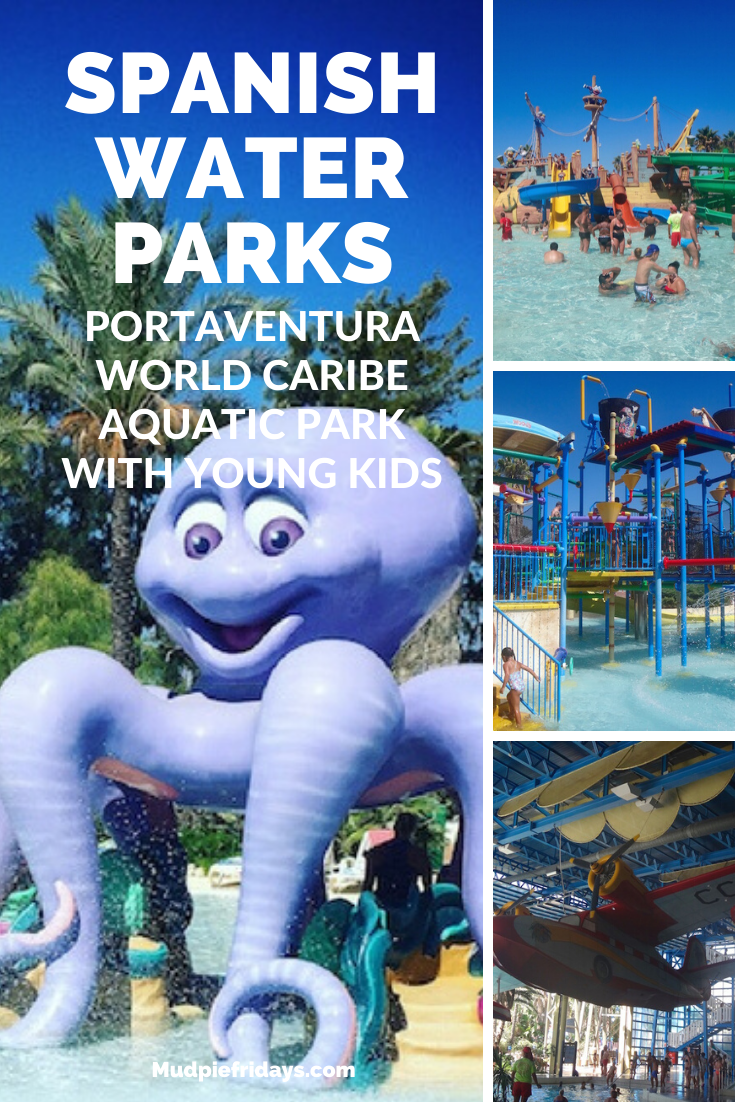