Eurocamp Holiday Diary Part One: We were very lucky to be invited to visit Hourtin-Plage in France courtesy of Eurocamp over the May half term. We had an absolutely fantastic time and you can read all about our opinion in our review post. However what did we actually get up to? Well the answer is a lot. I am totally amazed by how much we fitted into the week. So I have decided to split the post into two so that if you are considering visiting yourself you will have lots of ideas. Saturday – We arrived at the holiday parc around 7.30pm. Met by Andy and Rachel I was surprised by the warm welcome we received. It had been a long drive and both the boys needed to let of steam and move around after being couped up in the car. I unpacked and made the beds, Monkey set off to explore bringing back an armful of large pine cones. Kipper busied himself opening all the draws and cupboards he could find. Raises eyes to the ceiling.
Sunday – We woke late and went down to the onsite supermarket to get come bread for breakfast and dinner. We had already decided we would probably eat at home that evening as everyone was still tried from the journey. It was lovely sitting out on the veranda eating breakfast. We over looked the new water attraction on the Parc which starts at 10am. We were about half way through breakfast when it turned on for the first time. Monkey was so excited he didn’t know what to do with himself! Declaring instantly he was no longer hungry and that he wanted to put his swimming kit on. We managed to stave him off until after we had finished eating! Monkey and Hubby spent all morning the pools and playing on the slides while Kipper had the mammoth of a morning sleep. Lunchtime we sat on the veranda again and then it was my turn. I thought I may avoid getting too wet on the pirate water area. Ha ha I was very wrong. I lost track of the number of times we went up and down the slides, racing each other to the bottom. After about an hour I took Monkey back to the mobile home as Kipper had now woken and had been fed and wanted to do something. We decided to wander down into the village after being told about the ice cream parlour with 64 different flavours by Rachel. They even had sorbet for Kippers cows milk intolerance. He really enjoyed the apple flavour woofing it down in record time. We decided to stop for a drink in a bar close to the beach and play hangman, which is one of Monkey’s favourite games. I must of a had the largest Spritz I had ever seen. There were a small number of bars and restaurants, a couple of surf shops where you can hire boards and some typically tourist merchandise establishments. We stopped in the green grocers on the short walk back tempted by the cherries and some of the sweetest apricots I have ever tried. We had some BBQ beef steaks and salad for dinner. It was still incredibly hot so we hung towels off the veranda to keep the boys in the shade. It was a very nice meal indeed and ideal for us as Monkey practically fell asleep at the table. Kipper had a bath on the decking enjoying splashing everywhere! 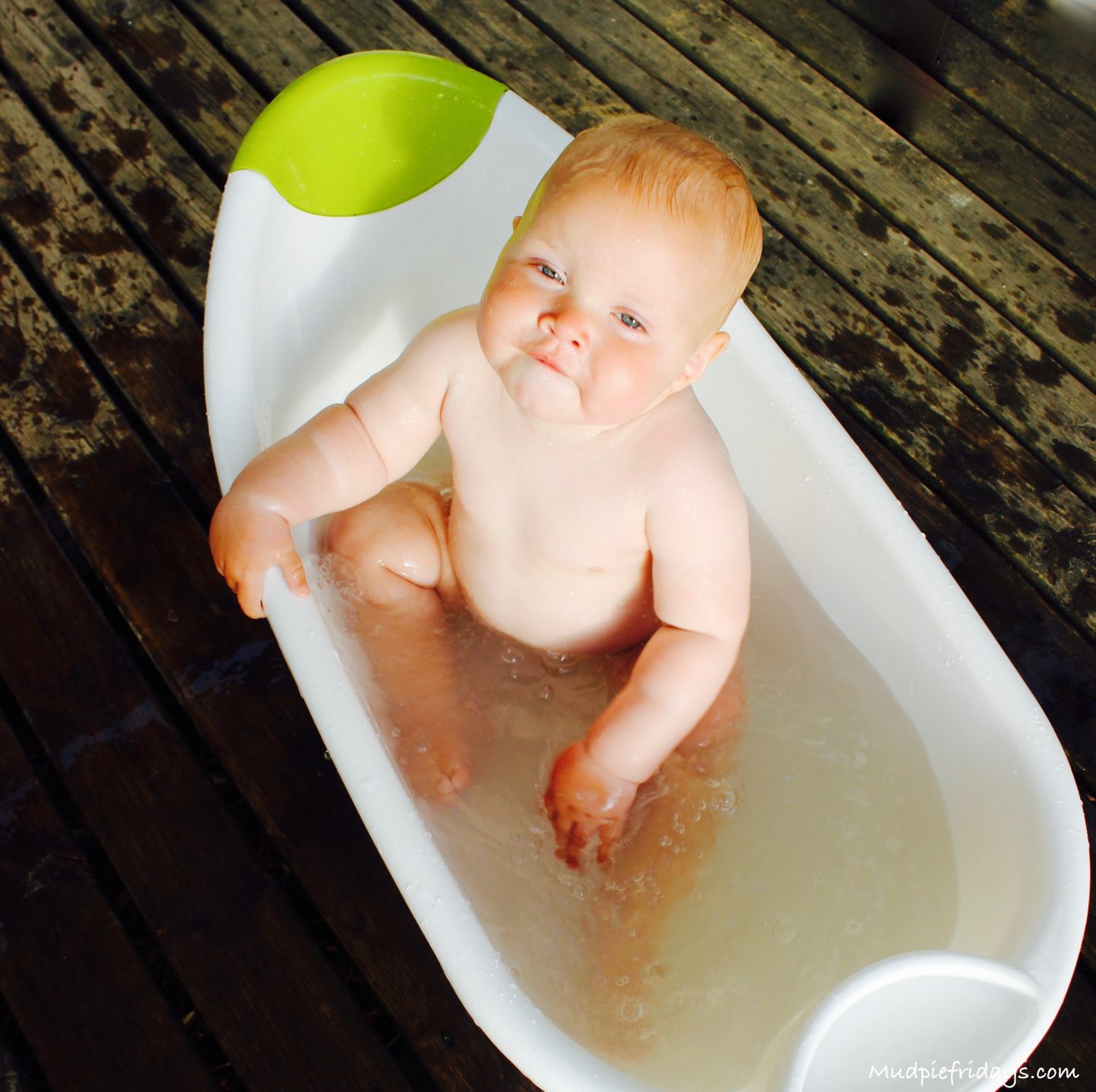 Monday – Waking to rain it took us a little while to decide. Looking up the weather forecast we decided to head into Bordeaux to see some of the attractions. Its about an hour and half from the holiday Parc, we had a great time exploring despite the rain. 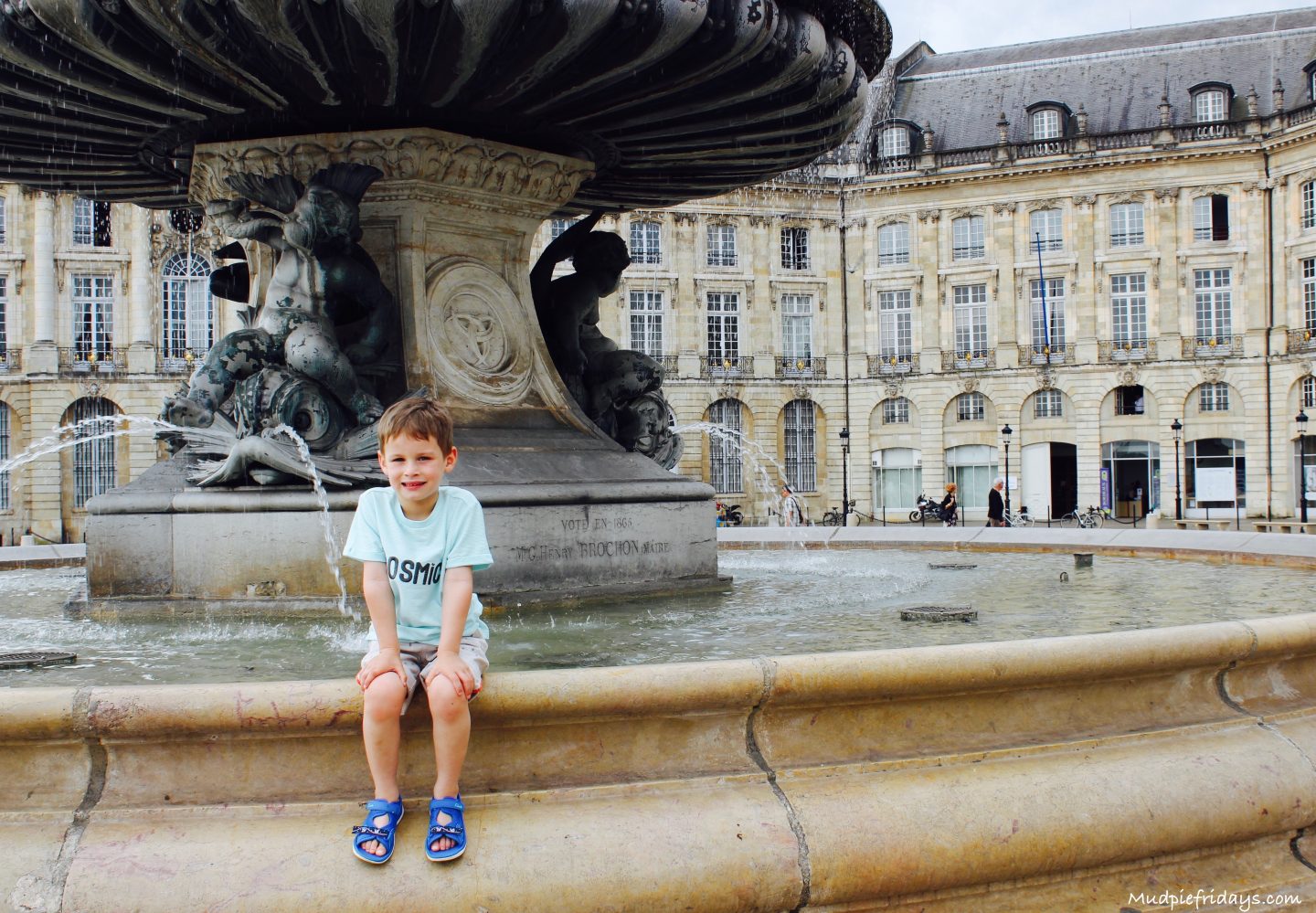 Before leaving Bordeaux we took the opportunity to stock up on food and wine in the shopping centre we had parked in. By the time we had reached the holiday parc the sun was shining again so we decided to have dinner outside on the veranda. But before we did Monkey needed to stretch his legs after the drive back. So we headed down to the shop to get some fresh bread. Stopping in one of the two play areas to have a bit of a swing and collect yet more pine cones! We thought it rude not to try out the bar. As we are out of season there wasn’t any entertainment on. Although Monkey made his own by cracking all the monkey nuts. Armed with our fresh bread we sent off for home, to have salad and fritarta for dinner on the veranda. Swiftly followed by a game of cards once the kids were in bed. 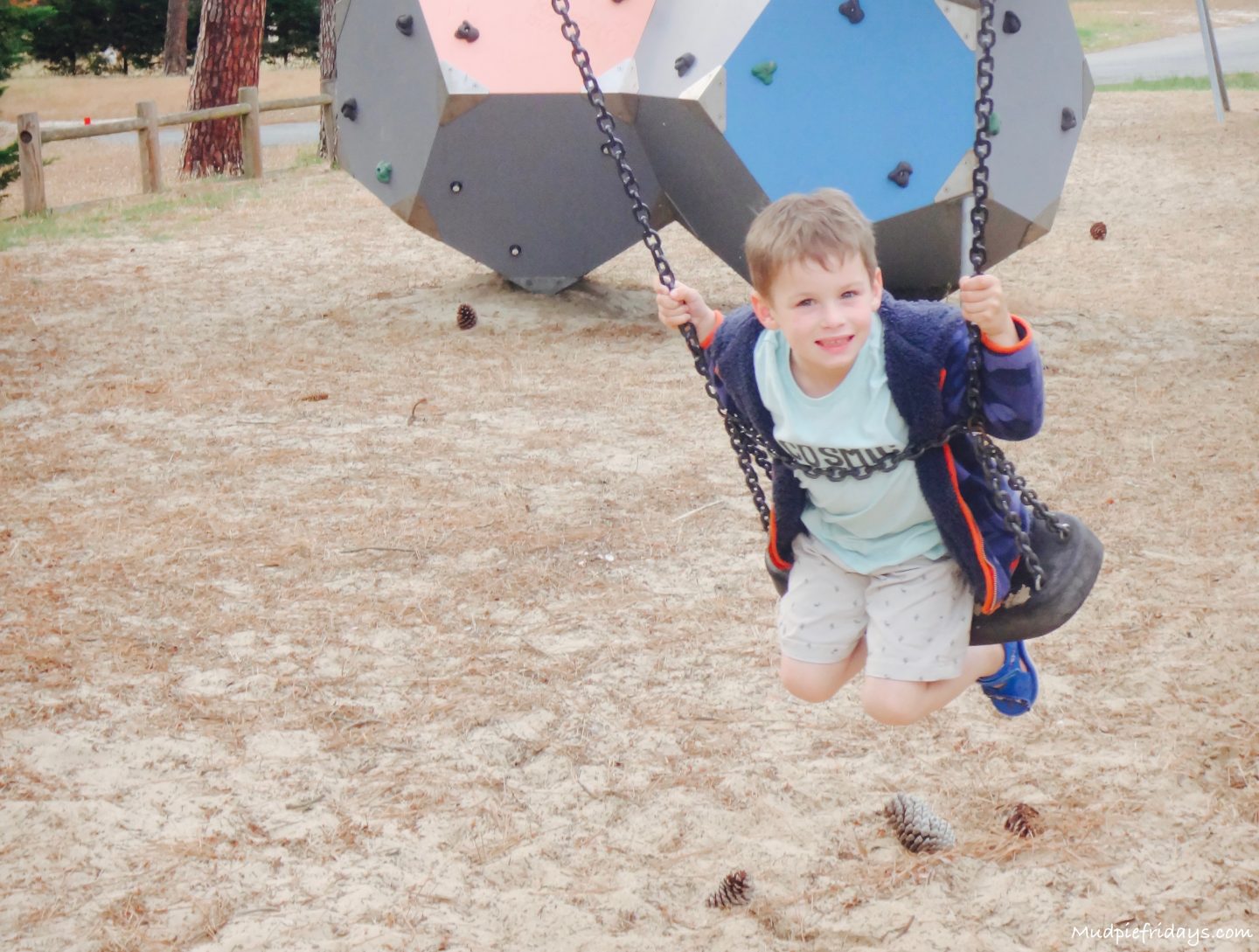 Tuesday – We woke to another cloudy day so after an early breakfast decided to head into Hourtin Plage and the beach. Thankfully its only a ten minute walk even with a four year old in tow. Just as well since I completely forgot the amount of stuff you have to take  to the beach with a baby. We had no idea what the beach would be like, yet we were both completely unprepared for the size of it. The dunes (although all fenced off) were the same size as houses! And it went for miles, literally as far as the eye could see in each direction. The sea was out too so it there was this great expanse of sand. 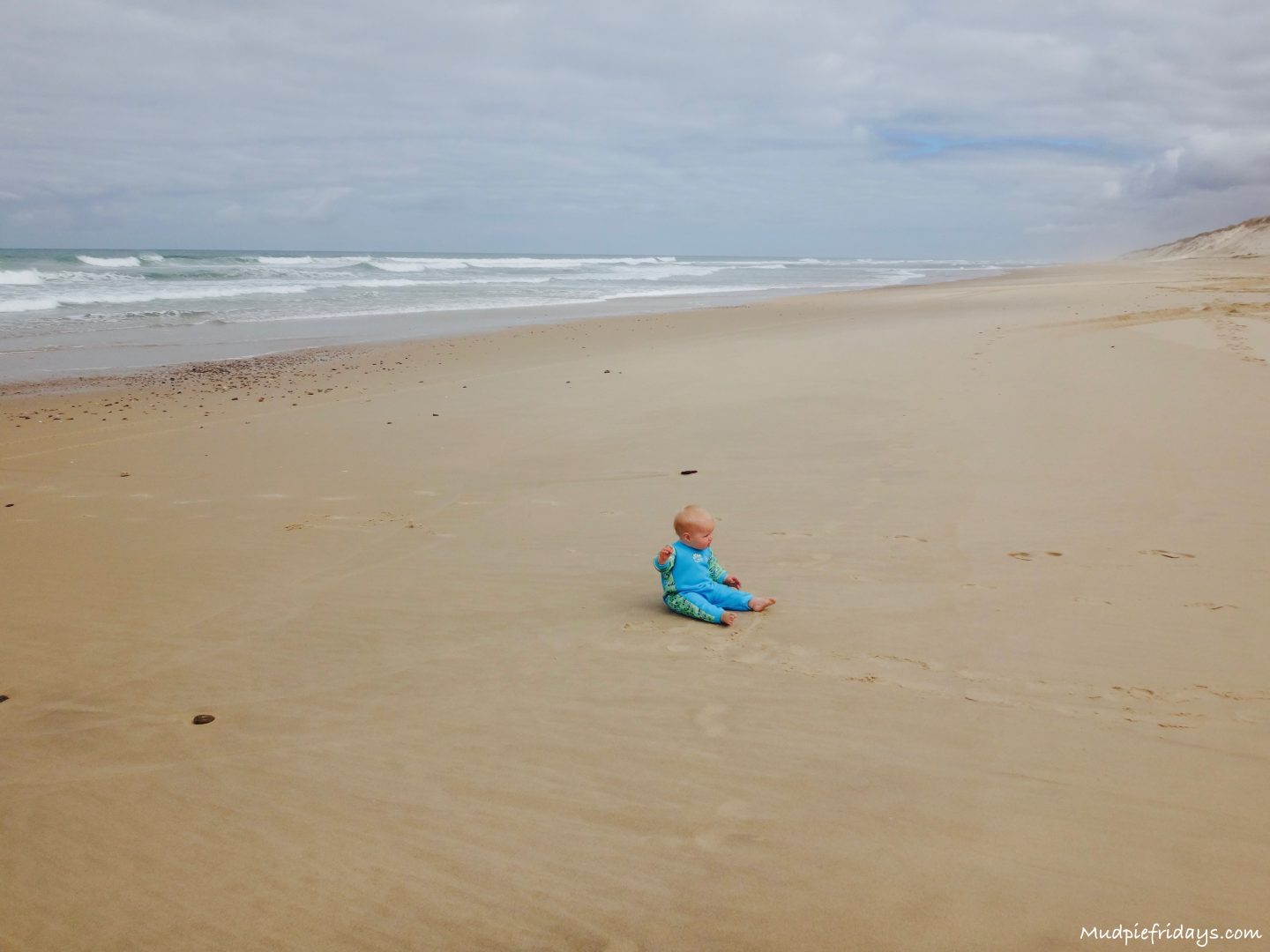 There was a wooden walkway down so we were able to take the buggy almost all the way down. Both boys couldn’t wait to explore. Trying the get them to stay still while we put on their splashabout wetsuits was interesting! Monkey ran straight off to the sea with his bucket and spade we had borrowed from the Eurocamp reception. Kipper was so interested in the and that he kept laying down putting his face to the side as to feel it. Although he kept pointing towards the sea so it wasn’t long until he decided to crawl down to splash about in the waves. Being the Atlantic coast the waves were too big to go into any depth, but there was quite a long run off so the boys could play happily. Kipper really enjoyed jumping the waves. It tired him out so much he ended up having a snooze under the umbrella. Monkey and Hubby went off stone collecting and ‘treasure’ – sea glass to you and me! We decided to head back to our veranda for lunch, can you tell this became my favourite place while we were away?  Im not a fan of eating on the beach since the sand tends to go everywhere! After a quick lunch it wasn’t long before we were back in Aqua Pirate. This time Kipper joined in the fun, after a couple of days constantly pointing at the splash down area. As if to say I want to go there! His face when the huge bucket of water cam tumbling down was priceless. I am just sad I didn’t manage to capture it. He had a little go on the baby slide before we all went to play in the pool. Monkey tried out his new Sharkfin while Kipper floated around the jacuzzi area. The water was reasonably warm. He liked walking around the outside of the jacuzzi the best, relishing the independence. I had only put on his UV suit as the warm in one was still drying from the trip to the beach so we only stayed in a little while. 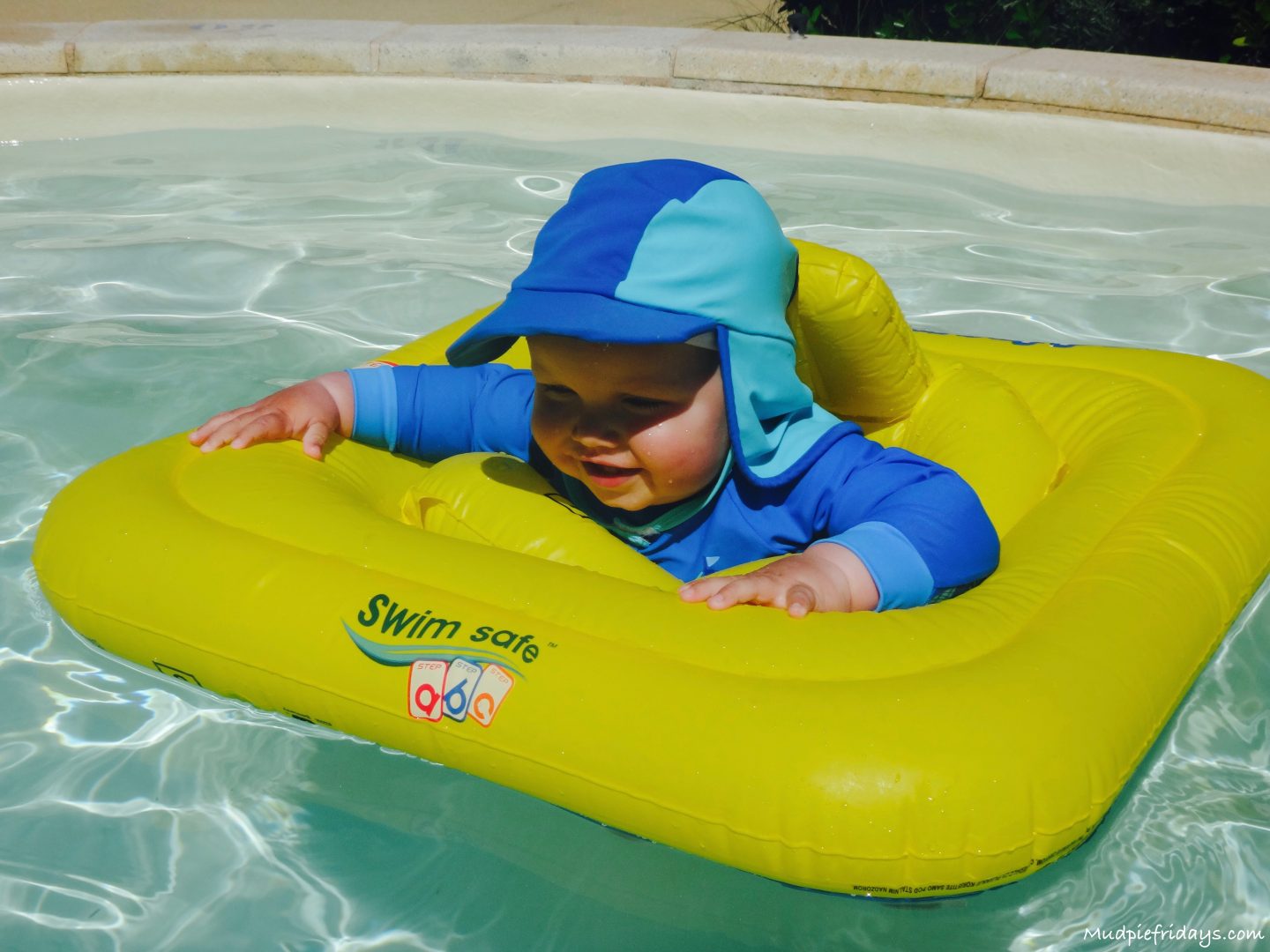 Tuesday evening we decided to go out for dinner to Le Grillions in Hourtin Plage. They had a restricted kids menu of mussles and pasta only. So Monkey decided he would share ours. Not sure why my mussles were any different! The owner was really helpful as she didnt speak much English and we don’t speak French although Hubby can understand it. We all shared a baked Cambert for starter, then Hubby had a duck dish and I had mussles. I stupidly didn’t take any photos but they were so well presented. And all tasted delicious, although I have come to the conclusion that eating out in France is not cheap. With a crafe of wine and a juice for Monkey it came in at just over 100€! On a plus there is a climbing frame across the road which allowed Monkey a quick play before bed. Just as well as his brother had other ideas and we resorted to a walk around the holiday Parc in the buggy to get him to drop off. 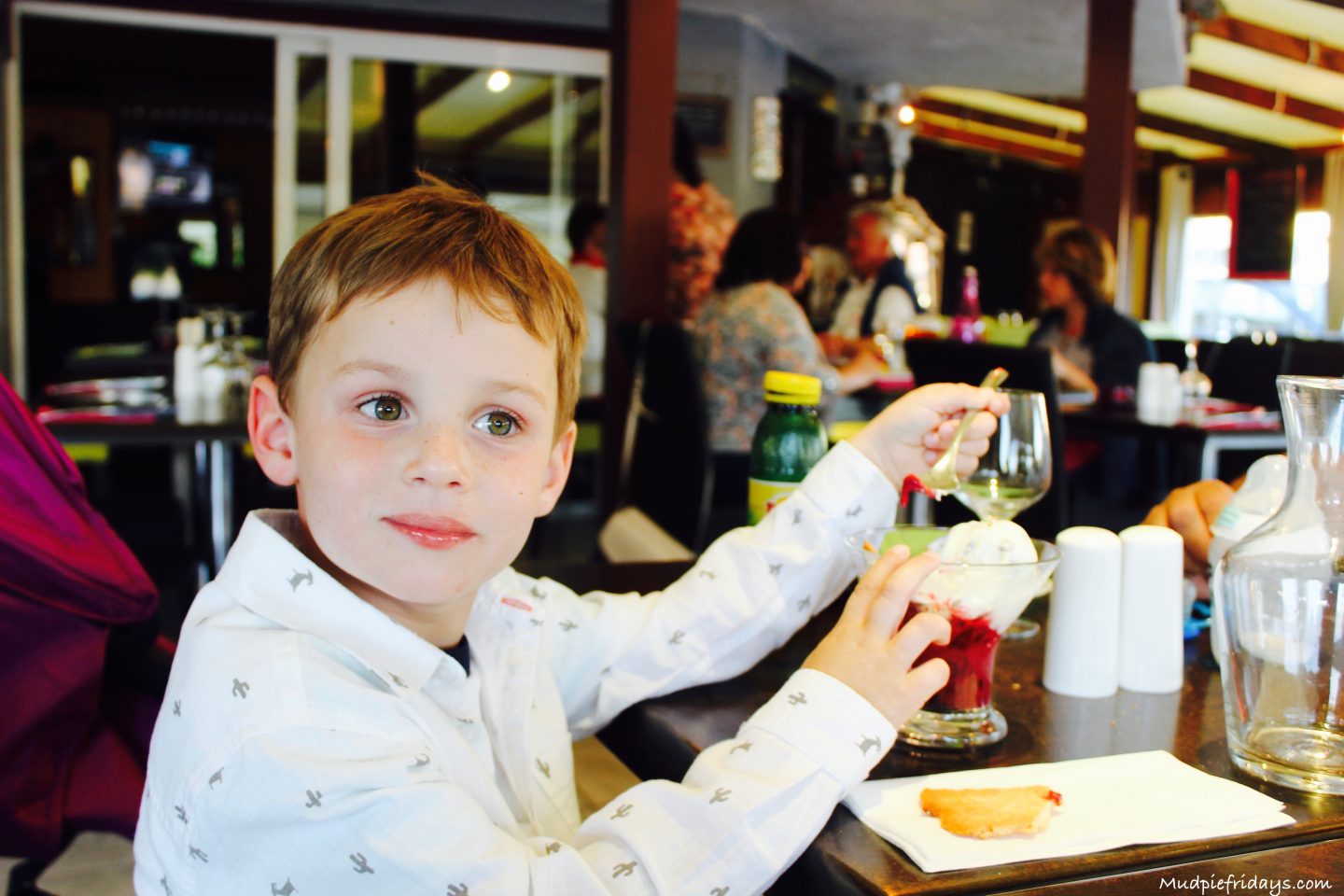 Read all about our second week here.

We were invited to stay at Eurocamp in return for this honest review. All opinions and words are my own 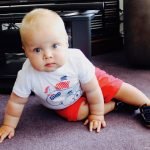