Praia do Barril Tavira the  Anchor Graveyard: When we first decided to go to Portugal I googled what was worth doing with kids and came across the anchor graveyard. Instantly I wanted to visit. Based in the Eastern area of the Algarve it was about an hours drive from our villa. It was the longest trip we made other than to the airport and boy was it worth it. 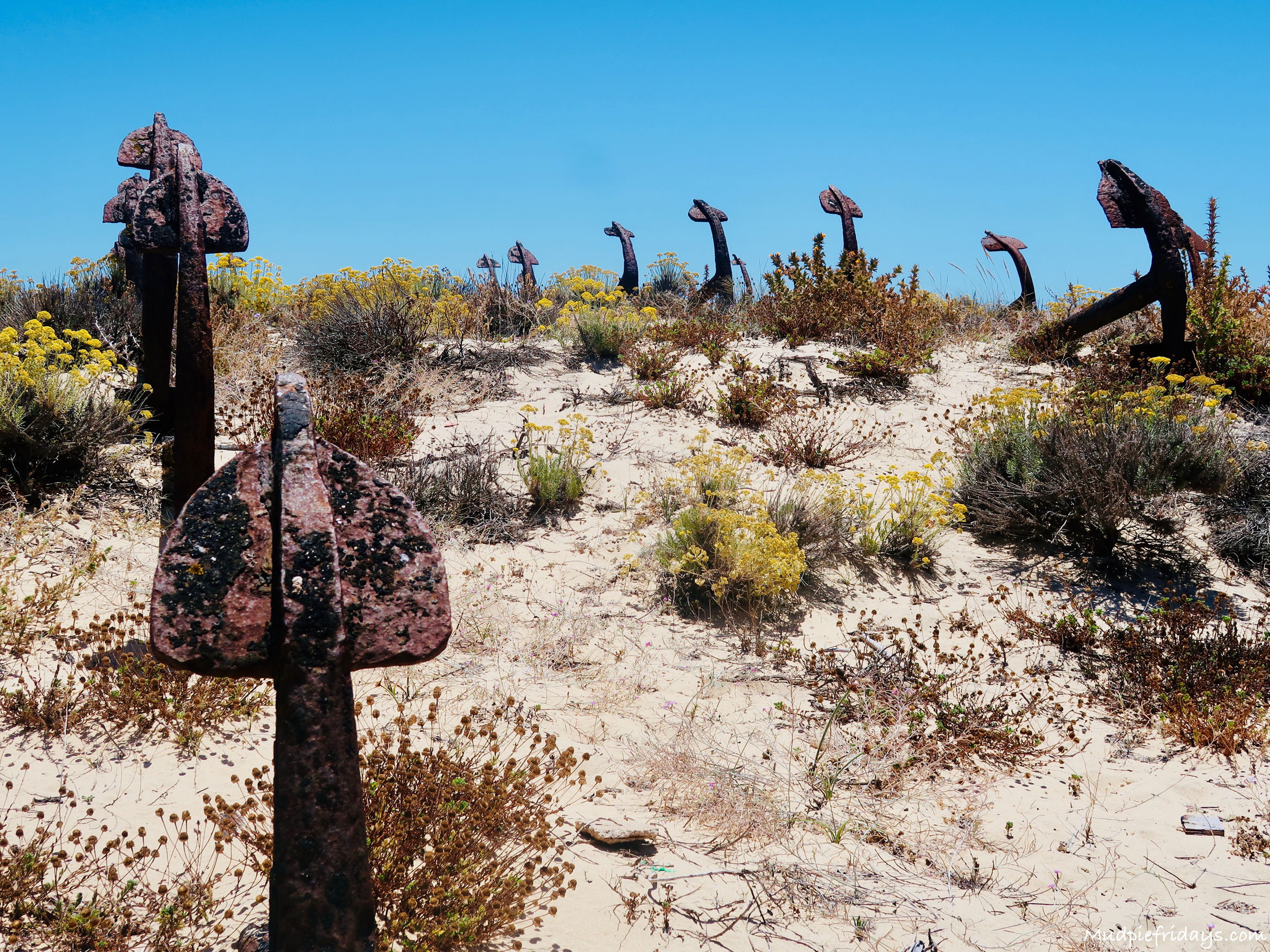 Unlike our previous beach experiences in the Algarve there was plenty of parking. A huge carpark which worked out about 1€ an hour. Although once you have paid you only get 15 minutes to pack the car up and leave, which if you are the opposite end of the carpark with little ones is tight. From the carpark you turn right over the mud flats and a little bridge. 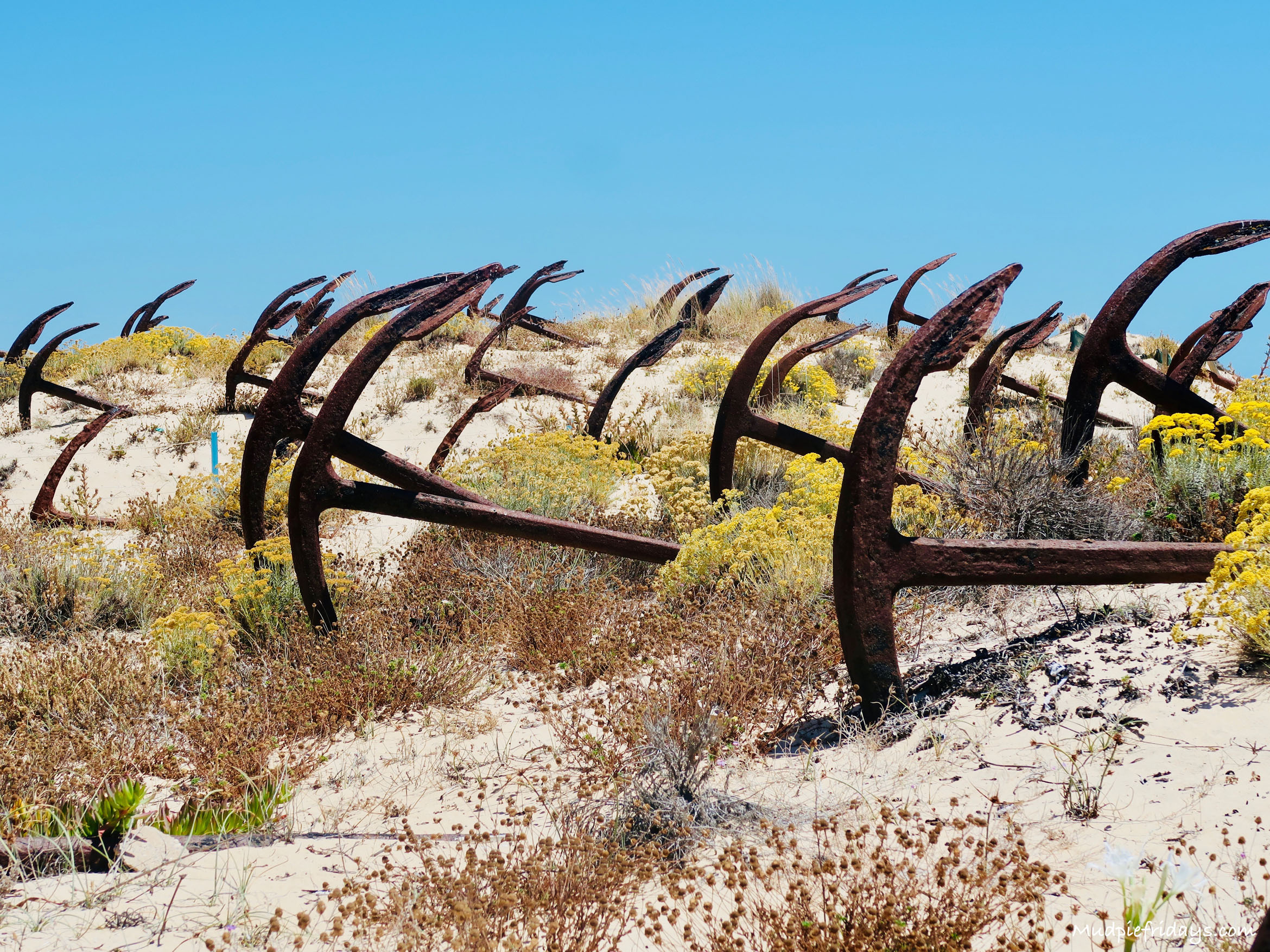 Then you have the choice of getting a train up to the beach or walking. When we arrived there was a big queue so we decided to walk. I would guess it took us about fifteen minutes. We stopped a little on route to marvel at all the crabs in the mud. Monkey was particularly fascinated by those which had one large pincer. Its worth doing this on the way up, as by the time you come back the tide will have turned and the mud will be covered by water.

The path is hard standing all the way up so fine to push a buggy or similar. We did get the train back which cost 1.5€ for the adults and kids over five. Be warned though its a bit of a free for all and only one carriage can take buggies. Its a slow train but still faster than walking. 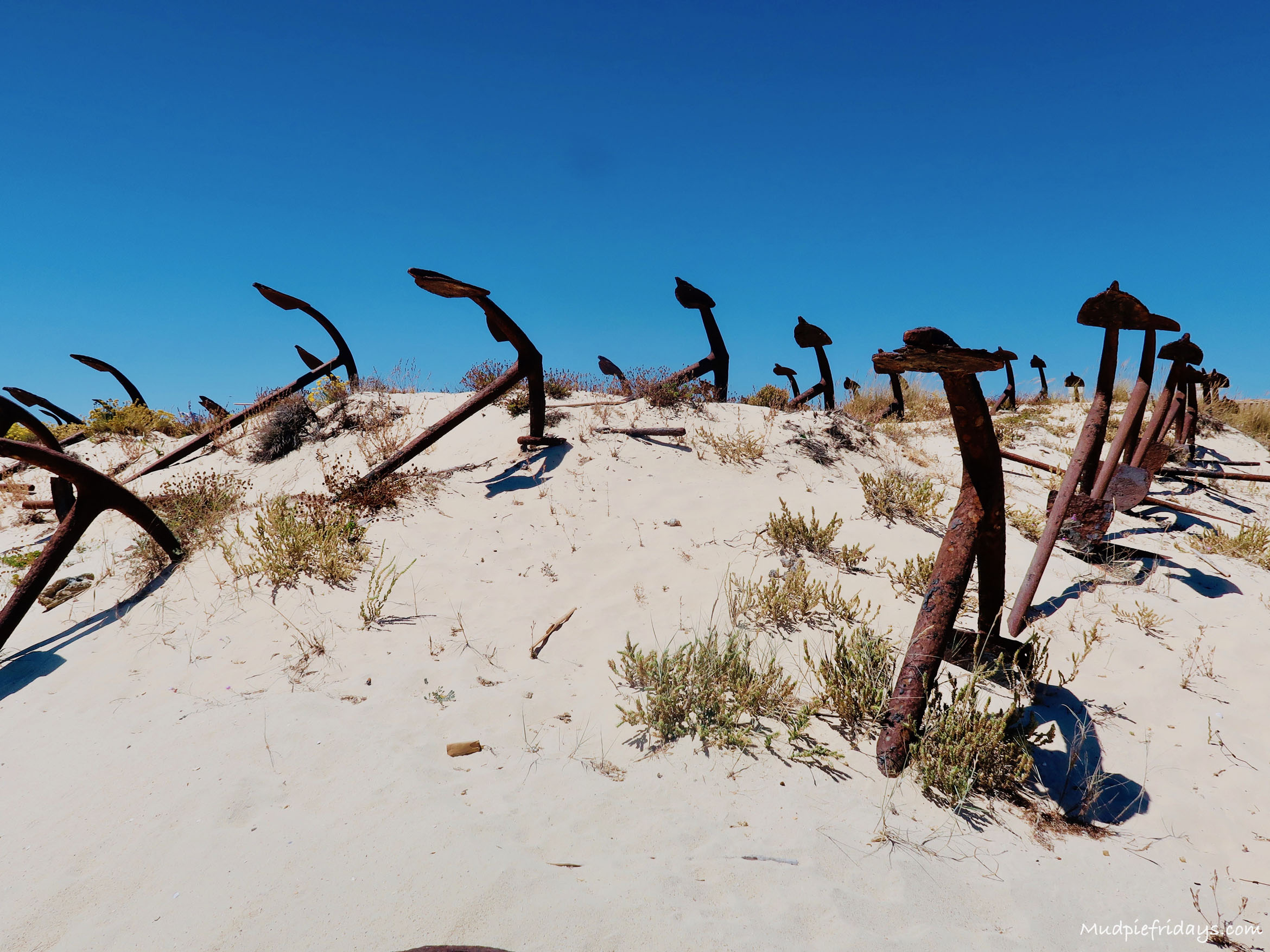 The beach itself is totally set up for tourists. There are numerous restaurants overlooking the white sands. We stopped for lunch and a drink. Price wise it seemed reasonable. There was also a little gift shop selling buckets and spades, sun lotion, hats etc. Incase people had forgotten anything. Plus coffees and ice creams. The public toilets were very clean and there was plenty of them. 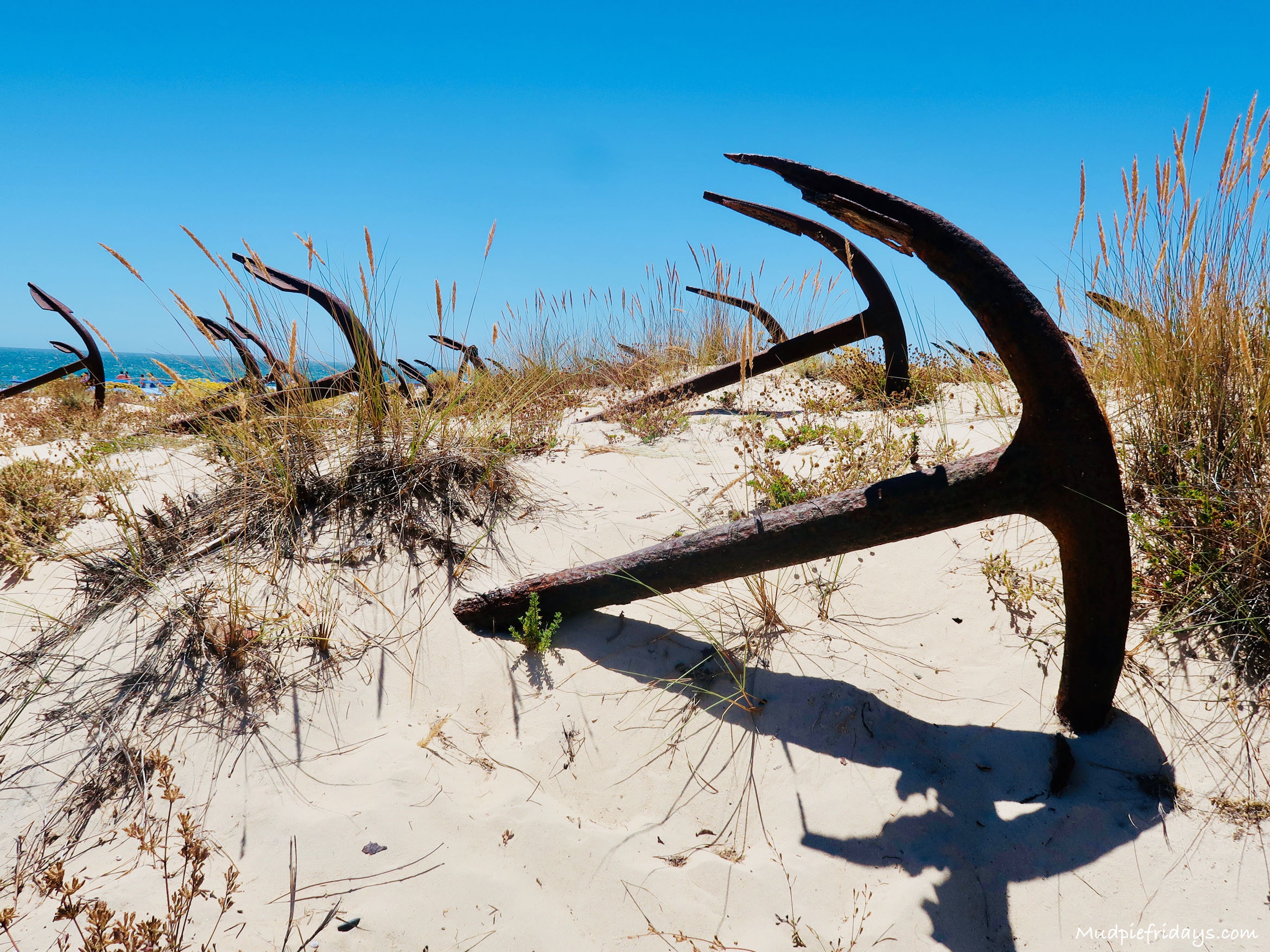 The restaurant we picked was right opposite the anchors. They were everything I expected them to be. There is 100 in total although some of the ones on the edges are starting to rust really badly. The main area is roped off so you cant get in amongst them. Which does mean that getting a photo is easy. On the other side of the path there are a few which were not roped off. Here people would wander in amongst them and pose for photos. 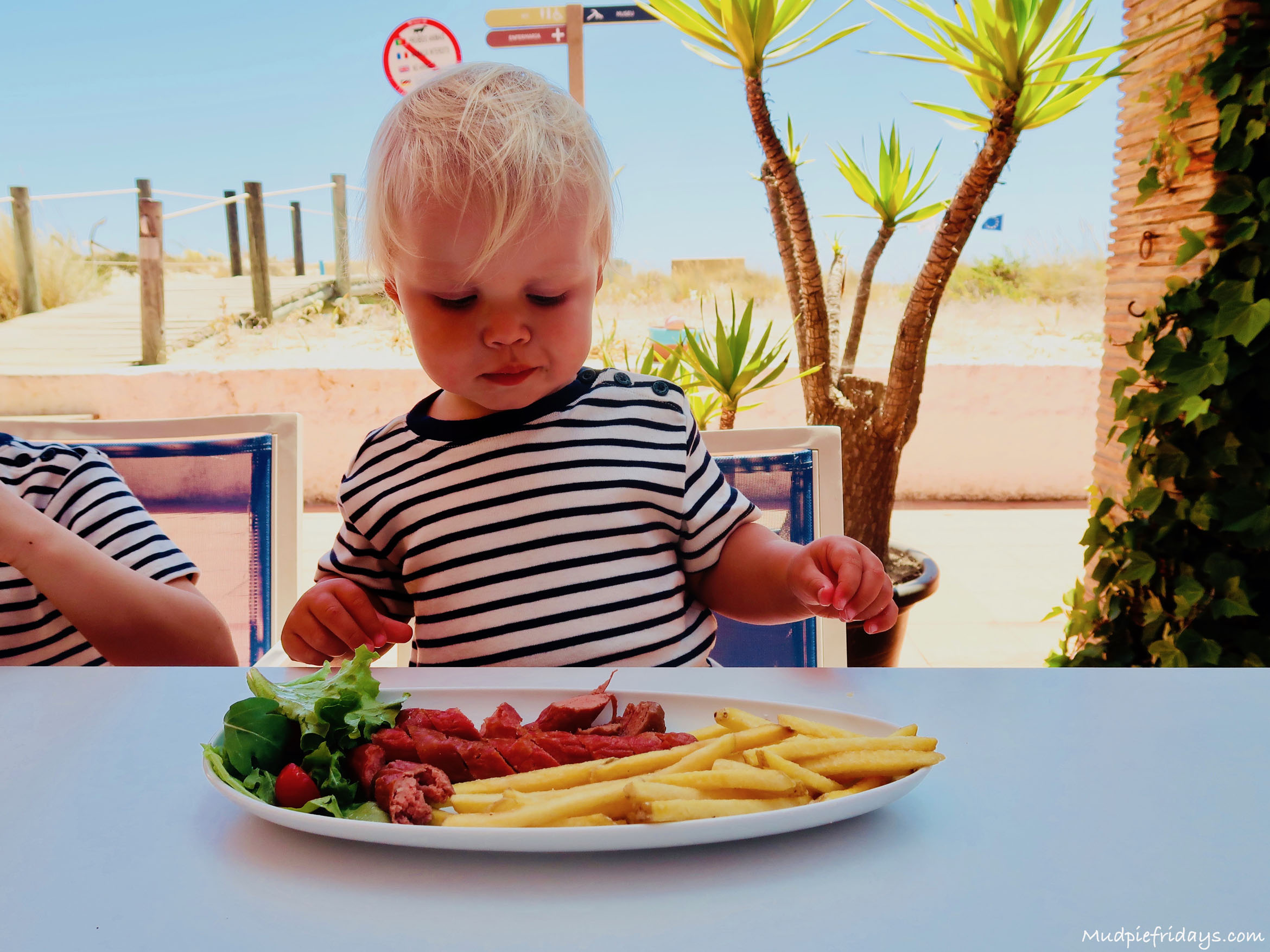 I found the whole experience very thought provoking. As the anchors are a homage to the tuna fishing fleets which use to fish the waters off the Portuguese coast. I initially thought they were from the boats themselves. However I learned that they in fact use to hold the nets. Its hard to imagine hauling up these giant anchors out at sea. Despite there being lots of people on the beach and in the restaurants. The area around the anchors seemed eariely quiet, having left the boys in the restaurant with Hubby it gave some time for quiet reflection. 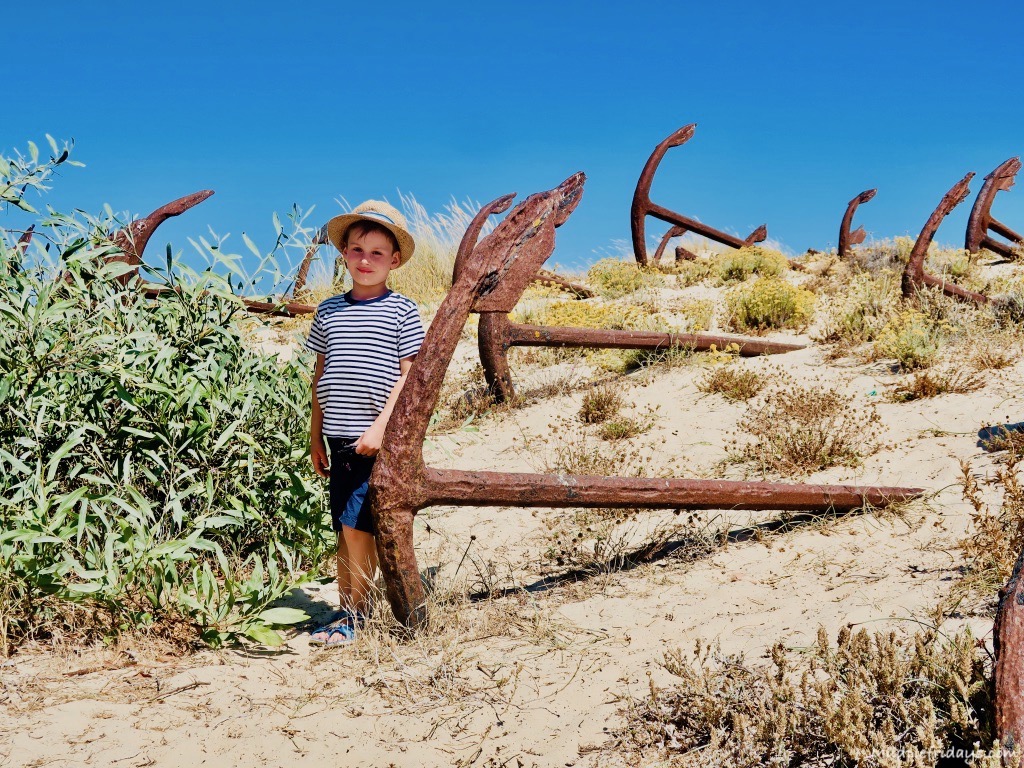 The beach itself is long and much wider than those in the coastal bays we had visited before. The fine sand was very white and waters turquoise. If it wasn’t for all the bright umbrellas that are typically Mediterrain then you could have almost thought you were in the Carribean. The water was shallower although still cold and the waves still quite fierce. Since we had the buggy we didnt walk along the beach too far, as the boards disappeared. But you could see in the distance the people thinning out. If we hadn’t had the boys we would have ventured much further looking for a little piece of solitary paradise. 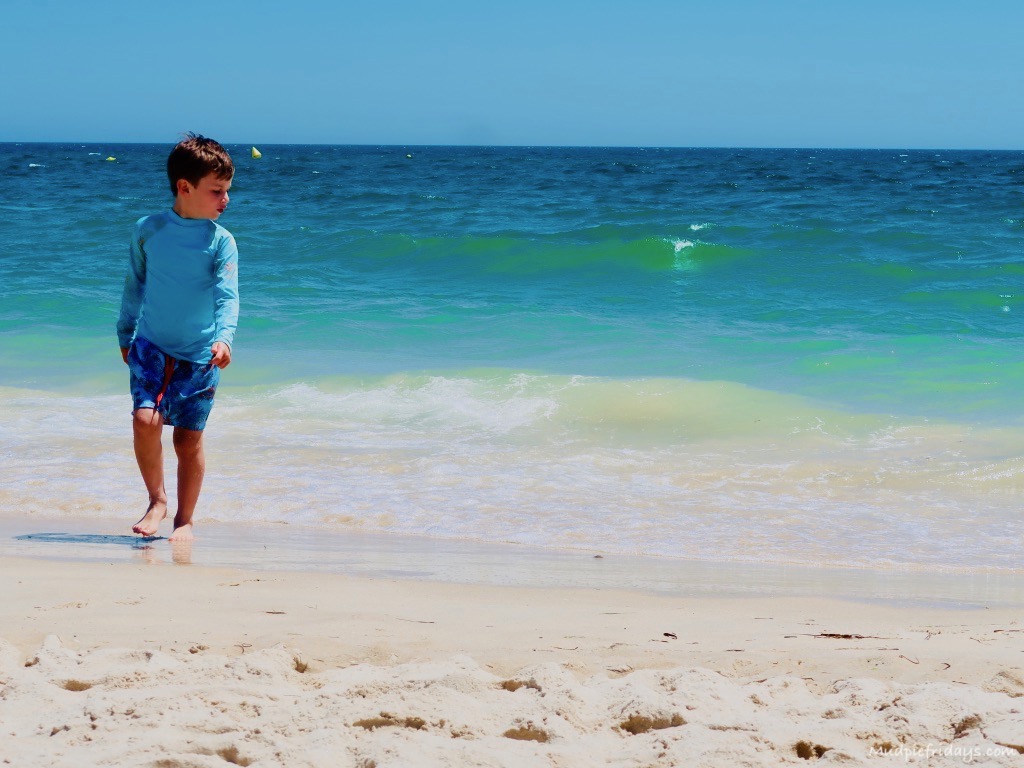 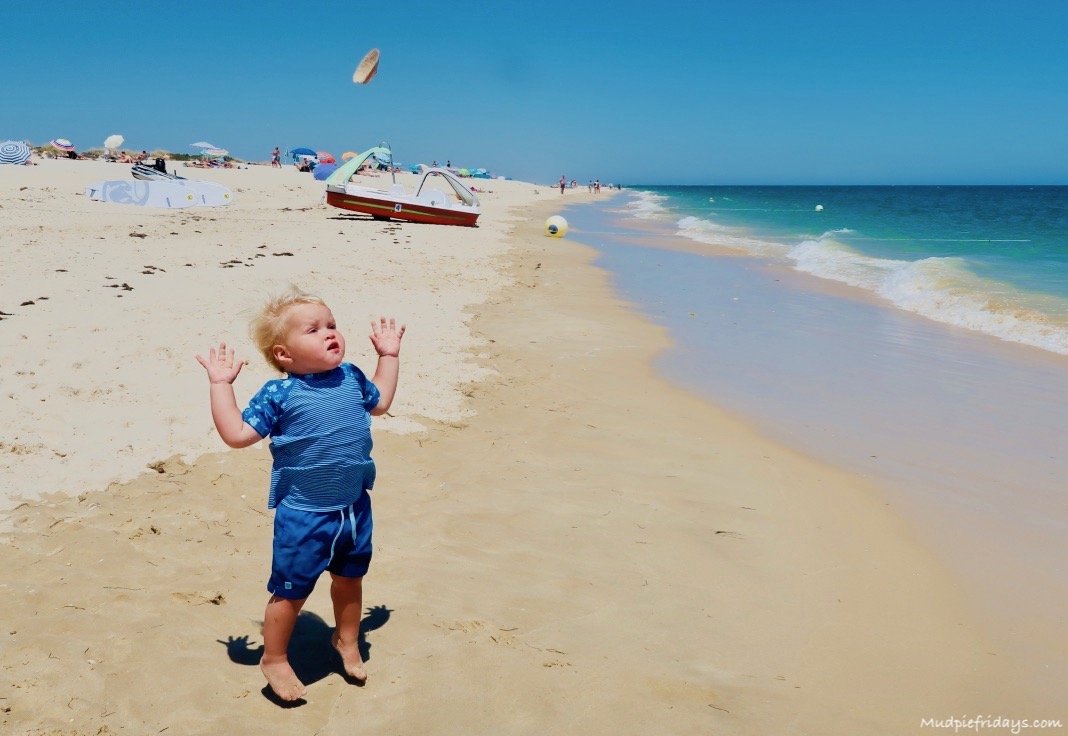 I could imagine that both the beach and the anchors would look stunning at sunset and the bars the perfect place for an after dinner cocktail. 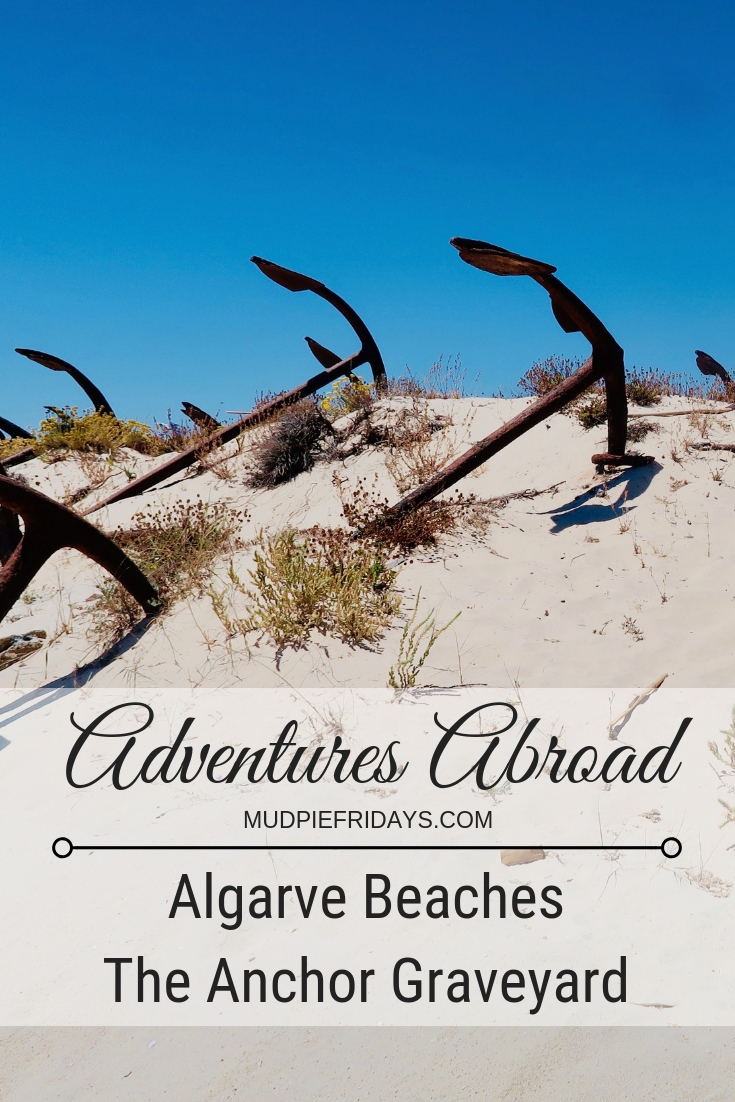 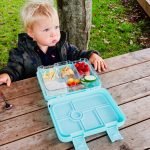 Review: Stuck on You Bento Box